Hitler's favorite filmmaker turns 100 -- and still says she didn't do anything wrong. 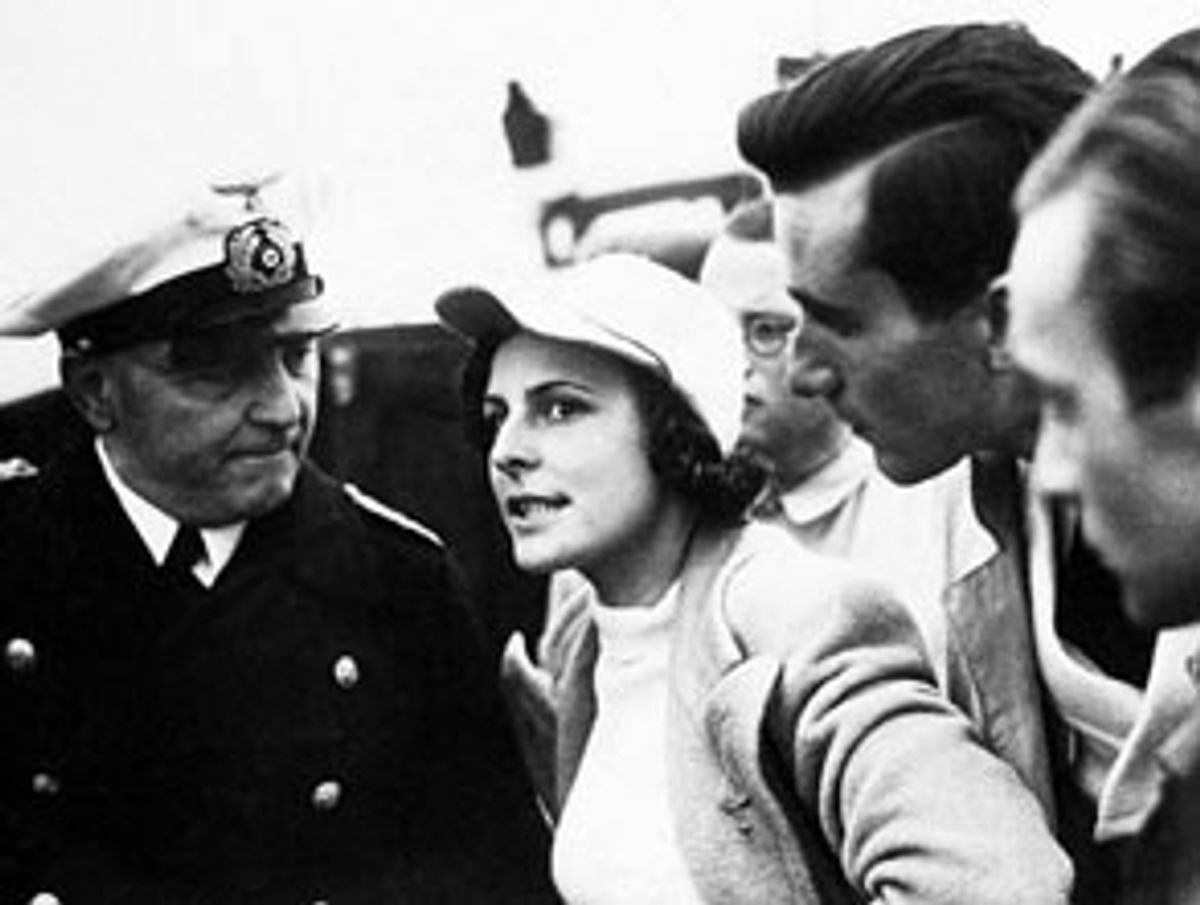 Leni Riefenstahl celebrated her 100th birthday on Aug. 22. The milestone earned a few headlines as Hitler's favorite filmmaker and the last living member of the Führer's inner circle welcomed journalists from the world press to her Munich home and Riefenstahl Produktion film studio. Riefenstahl was spirited and sharp, her white hair curling crazily, her eyebrows delicately penciled, her lips painted as red as the flag of the Third Reich.

If reporters, however, were expecting a candid interview with the woman most famous for making propaganda films such as "Triumph of the Will," they were disappointed. Although Riefenstahl marveled playfully about becoming a centenarian, she kept the discussion focused on her latest film, "Impressionen Unter Wasser" ("Impressions Under Water"), released in April in Germany. The silent film is a series of shorts of tranquil oceanic scenes. Riefenstahl became fascinated with sea life in her 70s, when she said she was 20 years younger in order to get certified as a scuba diver.

The film met with lukewarm reviews. Some critics called it meaningless, images without impact. Some found it just plain weird, no doubt a reaction inspired by the camera's quick pans to Riefenstahl wearing scuba gear and smiling wide at the camera. Others, recognizing Riefenstahl's allegiance to beauty -- exemplified best in "Olympia," her film of the 1936 Berlin Olympics -- thought that "Impressionen" might reflect her ultimate pursuit of purity.

On her birthday, the filmmaker hosted an elaborate party at which some of Germany's most famous celebrities attended, including the flashy magicians Siegfried and Roy. Attendees were reminded that Jodie Foster was working on a project about Riefenstahl's life.

The day after her party, Riefenstahl suddenly fell ill, according to her assistant and confidante of 38 years, Horst Kettner. "Ms. Riefenstahl is in great pain," he told Salon. "She has become very weak and is taking painkillers."

Also that day, Aug. 23, Frankfurt prosecutors announced that they were investigating Riefenstahl for "racial incitement" and "disparaging the diseased." According to a German law, denying the Holocaust is a crime punishable by a fine or jail time.

The probe was launched after Rom, a 76-year-old Cologne-based Gypsy group, alleged that Riefenstahl lied when she told a German magazine that she did not know the doomed fate of 120 Gypsies who appeared as extras in her 1942 film "Tiefland" ("Lowlands"). Riefenstahl was quoted as saying that she had no knowledge that the extras were concentration camp prisoners from camps in Salzberg and Berlin, or that they were subsequently shipped to Auschwitz and other camps after shooting wrapped.

The denial deeply offended members of Rom, who matched the names of extras in the film with Berlin and Salzberg camp victims.

"We have documented these people who went to the ovens after she was done with them," Rom director Kurt Holl says. "For her to say that no one was harmed during her film is true. They were sent to their deaths afterward. These statements are just Leni Riefenstahl being Leni Riefenstahl, rewriting her own history."

Twice acquitted by Allied courts of any legal wrongdoing during World War II, Riefenstahl issued a statement through Kettner that her remarks were a "misunderstanding" and that she "regretted" the persecution of Gypsies.

Kettner, who has worked closely with Riefenstahl on her lesser-known documentaries after 1945, is outraged about Rom's claims. "This is like someone disturbing your defenseless grandmother," he says. "Hasn't she suffered enough?"

After denying repeated requests to talk with Salon, Riefenstahl finally agreed. But the interview was more revealing for what the filmmaker would not say. She refused to talk about Hitler or other high-ranking Nazis she worked with, including Josef Goebbels, the murderous propaganda minister who, photographs show, was a frequent guest at her home and with whom she met -- a week after the infamous May 1933 Opernplatz book burning -- to discuss "film projects," as she called them in her 1987 memoirs.

"I met the Führer in 1932 and I cannot blame or be angry at people for wanting to know more," she said. "It is not unfair to be interested. That is all."

Riefenstahl, who has for decades maintained that she was a passive artist simply doing what was commissioned of her, also refuses to talk about the most expensive, aesthetically breathtaking documentaries of their time. "Triumph," especially, is a difficult topic, a film solely used by people, she says, to attack her character. "I will always be asked to defend 'Triumph of the Will' forever," she says. "The circumstances of its production will linger forever."

"Leni Riefenstahl: The Seduction of Genius," a book by Rainer Rother, the German Historical Museum's cinema program director, was released in English in September. It traces Riefenstahl's career from her successful beginnings as a ballet dancer (a pursuit her father forbade and her instructors were not optimistic about) to a dramatic moment when, standing on a train platform on the way to see a doctor about a career-threatening knee injury, she saw a film poster for Germany's hottest director, Arnold Fanck.

Riefenstahl wrote an adoring letter to Fanck, and nine months later she starred in his next film, which required the still-injured young woman to climb snowcapped mountains, endure sexist remarks from her male costars, be pelted with snow, and look beautiful through it all.

Audiences loved her. But she was unsatisfied with acting and worked her new contacts to find funding for "The Blue Light," her first feature film -- a commercially successful work still lauded as one of the best movies of all time.

That was May 1932, the same year she wrote a letter to Hitler professing her devotion to the candidate running for the German presidency with campaign slogan of Freedom and Bread. By January 1933, he was appointed Reich chancellor. Four months later, Riefenstahl went on a picnic with Hitler and Goebbels. They were trying to woo her into making a film about a new kind of Germany.

"It was a critical point because for all the ambition and creative ability she had, as a female director, there were obstacles in a male-dominated industry," says Rother. "She had been told her whole life that she could not do anything, but here were two men who believed in her talent and were offering an endless supply of funding and manpower. I think, in a great way, Leni saw this as a way to advance her career."

The controversy over "Tiefland," an apolitical love story, is not new. Since early 1948, using the archive of the Reich Chamber of Commerce, reputable German press outlets have been publishing Riefenstahl's old pro-Nazi letters, which she always denies writing.

For 20 years, the trade publication Revue fought Riefenstahl in court. In 1949 she sued it for printing accounts from witnesses who claimed to have personally seen her select interned Gypsies at camps in Salzberg and Berlin to be "Tiefland" extras.

Riefenstahl won her legal battle but lost the public one. Journalists wrote that she had a "sharp and cold birdlike" presence during court proceedings, much of which recounted instances of slaughter. Though it was not exactly her fault, she became a symbol of a country that, at the time, was failing to decently acknowledge complicity.

In the early 1950s, when Riefenstahl wasn't producing any films and her artistic life was almost entirely eclipsed by her political past, Revue accused her of the worst: witnessing the killing of 20 Polish civilians by German soldiers in 1939.

Indeed, in her memoirs, Riefenstahl says she "heard gunfire," but did not witness any murders. She says she complained to the German government about "the mishandling of Polish citizens." Did she do less than a war correspondent would have done? What kind of influence did she truly have?

Enough, answers Rom's Holl. "She had a say when no one did and if it did not work during Hitler's time, all right ... But today is different. She has a chance to at least recognize what she was involved in and to show a conscience," he says. "Today, it is hard in Germany to convince people that Gypsies suffered during World War II. They are stereotyped as criminals. She did not credit those extras, some with speaking parts in her film, so perhaps considering their fate, she might honor their memory rather than think of herself first."