A hungry telemarketer discovers a jones for making the sale. 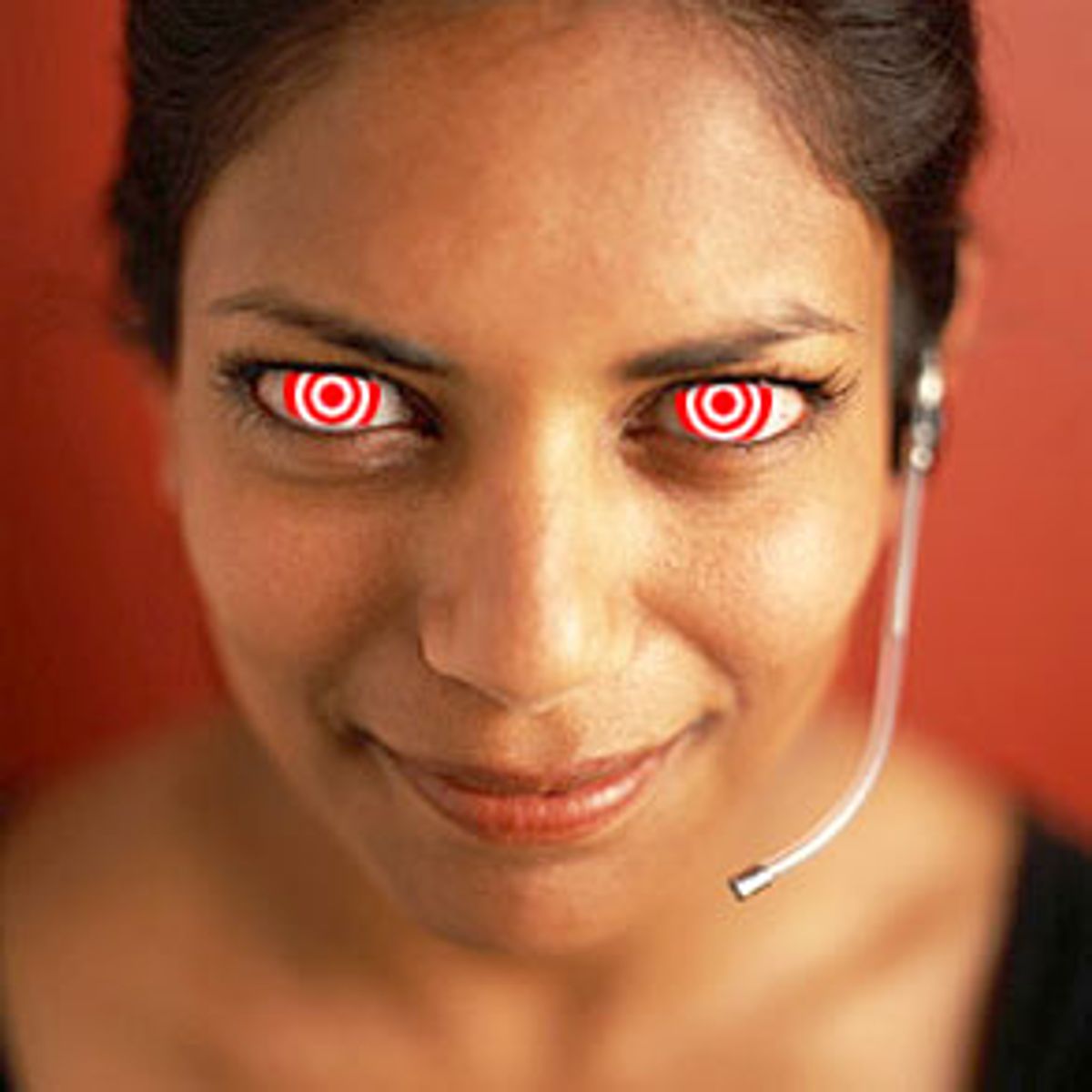 "Hello?" A tentative voice answers the phone. "Good morning, Ma'am," I say. "This is Michelle from M--- and I'm calling to find out why you decided to give up your executive credit card."

"Well, uh," the voice stammers, "you charged me late fees when I was only late once in 10 years and you were rude to me on the phone."

"Did we do that?" my voice sounds shocked, although I am not in the slightest. Taking on a hint of Southern belle, I proceed to clean up the damage. "Oh my goodness. The computer says we did do that and I am just so sorry. Let me fix it for you. Tell you what, between you and me, I'll drop your interest rate 2.9 percent. Would that help you decide to take the card back?"

Got her. Signed her up. You bet I could do that. I could do just about anything if it meant the person on the other end of the phone would take back her credit card.

I stretched my legs in my cubicle and waited for the computer to dial up another victim. All day long I talked to people who had given up their credit cards in a noble effort to whittle down their debt. These were people with medical bills and house payments and college tuition, and none of that mattered to me because I had one goal in mind: to sign them back up. That was my sole duty, for I was a customer retentionist.

Unfortunately for debt-ridden America, I was also quite good at it. I discovered I had a hidden talent for it. And I loved every minute I was ripping off a sucker -- right up to the end. I was a sales junkie. Sweet-talking my marks, nailing a sale, was one of the most delicious highs I'd ever had, leaving me hungry for another conquest.

I didn't start out life wanting to sell people back things they had already given up. Since college, I had more or less subscribed to the "if it's not fun, don't do it" school of job placement.

I've held many jobs: nursing assistant, Ben and Jerry's tour guide, weed puller, baby sitter, bartender, restaurant owner -- the list is almost endless. Through every single job, one thought stood out in my mind: How can I do this every day for the next 30 years of my life?

But I was at a time in my life when I needed some security -- steady hours, steady paychecks. I had just come off months of being homeless with my three children, earning $2.12 an hour plus tips as a waitress with no benefits except a free meal and half-price beer.

I prepared for the interview with a $10 shopping spree at the local thrift store. I found a nice skirt and blouse and a pair of girly shoes (heels) and purchased my first pair of pantyhose since my high school prom. Getting dressed in my new apartment, completely bereft of furniture, I was surrounded by my three small children as I attempted to transform myself from haggard single mom into stunning corporate maven. I settled for neat and clean, dropped the kids off at their baby sitter's and nervously pulled my noisy, rusted Subaru into the parking lot next to the largest black SUV I had ever seen.

It turned out my first sales job was selling myself. I was awestruck by the company headquarters when I arrived for the interview. The stories-high atrium was filled with the sound of a piano and illuminated by skylights and floor-to-ceiling windows. I was convinced this was the perfect company. But so were hundreds of other job applicants who responded that day to the ad. Somehow I traded a line of bullshit for my first $12-an-hour (plus benefits) job. I was elated. I knew I could walk down the street and when people asked me, "What do you do?" I could say, 'I work for M---.'" In my head, I was thinking: See. I am a normal person, too.

I was a quick study. I easily learned the computer system and was the star student in the sales classes. I effortlessly established myself as the "one to watch" and was enlisted by my instructor to help some of the older ladies in my class learn how to work the computer.

I was thrilled my first day out on the floor. We were partnered with other star workers and made calls, the way we had been trained in class, while a veteran employee (in my case, a girl of 19 who had worked there all of three months and made close to $35,000 a year) listened in.

I was on my game. I remembered everything I was supposed to mention, from the new lower rate we were supposed to offer to the free gift for signing back up with us. I was so congenial and so friendly that my guy not only signed up, but he thanked me for my wonderful work and asked to speak to my supervisor so that he could tell her what a great job I had done. I received a company commendation certificate, similar to the ones I was awarded in junior high school for being in the band, to hang in my very own cubicle.

Getting a commendation on your first call was unheard of and I became an instant star. The rush was almost more than I could handle. Within days, I was an addict, constantly in search of the thrill of nailing a sale. I talked to all kinds of people. I validated their concerns. I apologized for our previous ineptness. I listened -- which is the secret to sales. Most people just wanted to vent to someone. They wanted to tell me why their credit card payments were too high and how they didn't have enough money and how they were tired of people calling them at dinnertime.

I was God. I fixed it all. I rearranged payments. I moved around due dates. I promised to put notations in their file saying "don't call at 5 p.m." I didn't, but I promised I would.

I racked up the most numbers sold on the hardest lists. I got three promotions in three months and a raise with each. I could strut with pride in my former bar as I ordered drinks and bragged about my newfound wealth and profession.

Selling became my life, my religion. I sold credit cards during dinner. I sold credit cards during breakfast on Saturday morning. I even sold quite a few during Princess Diana's funeral, not because my presentation was more enthralling, but because people would do anything to get me and my friendly faux Southern drawl off the phone. It didn't matter why they signed up. It just mattered that my list got longer.

I spent one particularly ruthless 20 minutes talking to a woman who had given up her card because of her medical bills. After a nice conversation during which I was only half listening because I was waiting for the opening to make my kill, she told me that ever since she had been diagnosed with inoperable cancer she was trying to reduce the debt she would leave behind.

Still, I was prepared to bulldoze ahead. I was about to regale this poor woman with a tale of a lower interest rate designed to make her debt load easier (and the insurance she could buy so that when she finally did die her dependents wouldn't be saddled with her payments). But I caught myself. Who knows exactly why. What on earth was I doing? I couldn't go on. For the first time in my shift that day I leaned back in my chair. (I usually stood and paced.)

I told the woman that she certainly didn't need this credit card -- or any other. I revealed that I didn't have a card and wouldn't consider getting one. We spent the rest of my shift talking about the evils of credit card companies and doctors. Big Brother taped every call and so I was sure that this one was going to be on the top of the list for the next staff meeting. It didn't matter. I called in sick the next day and never went back.

Corporations are funny, though. Even though I was promoted three times in as many months, no one seemed to notice I had left.

How did I know? They kept paying me for three months after I left. Every other week another paycheck appeared in my bank account. I called and told them, but they assured me I was wrong.

I kept the money and headed back to the bar -- to my old job.

Michelle Kennedy is a writer in Green Bay, WI.