The ex-veep advocates more discussion about Bush's handling of the economy, without offering solutions of his own. 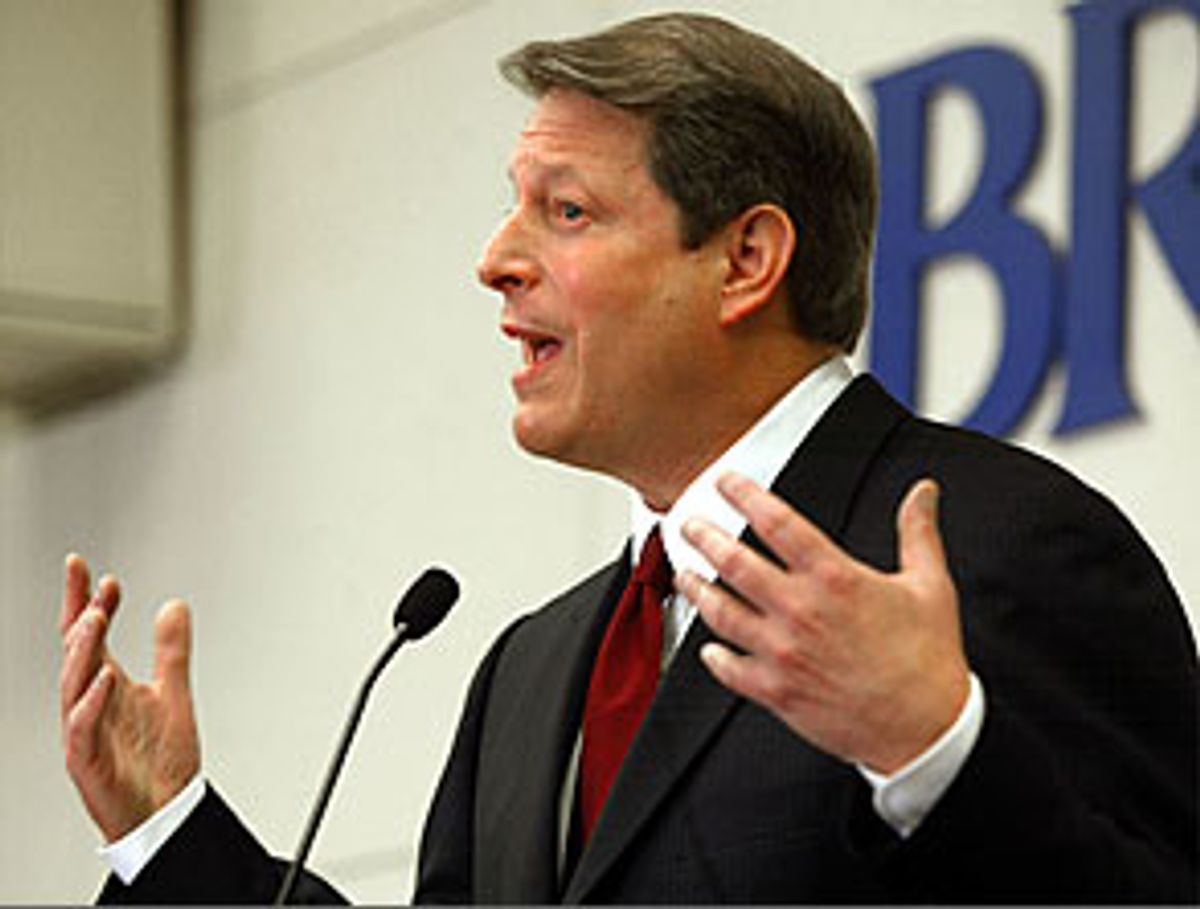 Al Gore's speech criticizing President Bush's economic plan was billed as the third in a three-pronged assault on key administration policies. But in front of a packed house at the Brookings Institution, Gore's prescription for the nation's economic woes boiled down to little more than a Joan Rivers' moment, summarized in three words: Can we talk?

Not only did the former vice president fail to offer solutions for the nation's struggling economy, but he also didn't even pick out pieces of the Bush team's economic approach that, in his estimation, were not working. Instead, he simply called on President Bush to gather with his economic team and try to figure out what wasn't working.

Speaking to a crowd that included wife Tipper and Democratic National Committee chairman Terry McAuliffe, Gore offered brief Band-Aids for the economy, including an extension of unemployment benefits to help those who have lost their jobs. But those kinds of specifics were mentioned only briefly and vaguely. While calling on Bush to show the same sense of urgency about the economy as hes showing about Iraq, Gore said the best thing Bush could do was to start listening to new ideas. But Gore's call to "completely reassess and change our current economy policy" offered few clues about what kinds of changes he thinks the president should make.

Anticipation for the speech was high after Gore's two barn-burners last week, in which he blasted the president's war plans in Iraq and said the administration ignored warnings that Osama bin Laden was planning to attack the United States.

With those speeches, Gore thrust himself back into the center of the national debate after nearly two years on the sidelines. Lefties heralded the birth of the new Gore, while others on both the left and the right said his remarks approached the brink of treason. But love him or hate him, the political world was once again talking about Al Gore.

Those looking for another round of Al Gore, liberal Superman, were sure to be disappointed by Wednesday's speech. He said that members of the Bush economic team were causing "a crisis of confidence in U.S. economic leadership throughout the world" and that some of them should resign, but refused to name any names. He stopped short of calling for a repeal of the Bush tax cuts and ducked questions from the audience when pressed about why he would not call for such a repeal. Rather than break new ground, Gore failed to go even as far as other Democrats, like Senate Majority Leader Tom Daschle, D-S.D., did months ago.

While the crowd was eager, Gore appeared sluggish at times. The text was long on wind-up, short on follow-through, and it failed to deliver a succinct attack on Bush's handling of the economy that other Democrats could rally around as the November elections approach.

There were, however, a couple of good one-liners. Gore likened Bush's handling of the economy to "a lost driver who won't stop to ask for directions." But even then, he failed to offer an economic road map of his own.

When Gore was asked who in the administration he thought should step aside, Gore demurred, saying he would "rather put it in generic terms." He called that decision "a matter of style," a style that has apparently changed since he called for the resignation of Securities and Exchange Commission chairman Harvey Pitt earlier this year. Gore acknowledged this change in "style," saying that he had gotten "hot under the collar" in calling for Pitt's resignation.

Gore staffers said the timing of this latest speech was part of a larger Democratic effort to refocus attention on the economy before the November elections. That was underscored by the presence of McAuliffe.

"We need to get people focused on the economy, and right now people are focused on Iraq," McAuliffe said. "But I'm telling you, two weeks out of the election, people are going to refocus back on these issues relating to the economy."

Even if McAuliffe's prophecy proves true, it's clear that Gore's speech Wednesday will not be viewed as a seminal moment in refocusing the nation's attention on the economy.