Buffy's creator gallops into outer space with "Firefly," taking the connection between sci-fi and westerns a little too literally. 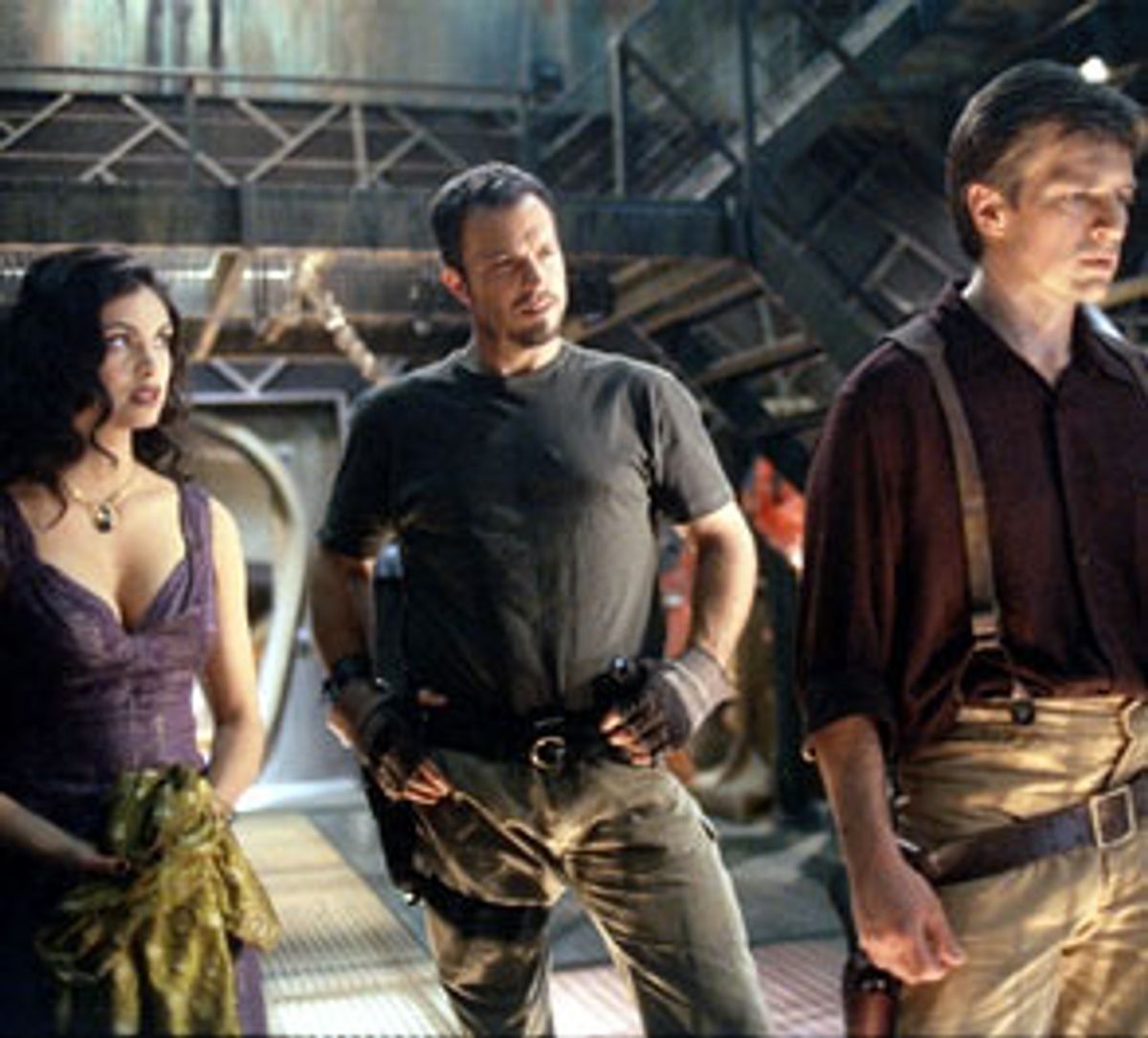 Joss Whedon's "Firefly," which premiered two weeks ago on Fox, has the distinction of being both one of the most anticipated shows of the season and one of the strangest. The first distinction is based on Whedon's cult status as the creator of "Buffy the Vampire Slayer" and its spin-off, "Angel," both of which are widely recognized as two of the most enterprising and original shows of the past half-decade. The second is based on "Firefly's" genre-bending premise: It's a science fiction western.

I don't mean that it's a science fiction western in the way that "Buck Rogers" or "Star Wars" or other sci-fi movies favored a scrap-metal version of the American Wild West over one-eyed Martians and enlightened aliens, or that "Firefly" has cowboyish space heroes and uses metaphors of space as the new frontier. I mean that it is the kind of western in which people shoot revolvers and ride horses and hang around back-lot sets that look as though they might have been used on "Little House on the Prairie."

"Firefly" is set 500 years in the future, six years after a war to unite the planets has been won by a totalitarian government, the Alliance. Those who fought for planetary independence are now forced to live in the outer reaches of the galaxy. Among them are Capt. Malcolm "Mal" Reynolds (Nathan Fillion), who roams around looking for work on his ship, the Serenity (masochistically named after a battle his side lost); Zoe (Gina Torres), his second in command, who fought alongside him in the war, owes him her life, and never forgets it; Zoe's husband Wash (Alan Tudyk), the ship's friendly and easygoing captain; Kaylee (Jewel Staite), a plucky young engineer, and Jayne (Adam Baldwin), a hotheaded mercenary whose ties to the rest of the crew are tenuous.

Also onboard are Inara (Morena Baccarin) a "registered companion" (so-called now that prostitution is both legal and a highly regarded profession), who hitches her shuttle to the ship so that she may expand her client base; Book (Ron Glass), a man of God (in the future they will be known as "shepherds," though sheep will be nowhere in evidence); and two fugitives from the Alliance: Simon (Sean Maher), a wealthy young doctor, and River (Summer Glau), his disturbed younger sister, whom he has freed from some sort of brainwashing experiment involving probes and who now carries on like Brittany Murphy in "Don't Say a Word."

The cast is as vast as space itself, though sadly not as deep -- at least not so far. The show's women, in particular, are a disappointment after the girls of "Buffy." If that show's heroine is a living contradiction between light and dark (cute blond SoCal teen/ass-kicking demon slayer), the women of the Serenity divvy up the traits that might have made for a single interesting character. Inara is beautiful and wily but seems incapable of breaking a sweat. Zoe is tough and disciplined but has yet to show any recognizable human traits. The sweet and doe-eyed Kaylee is handy with a wrench but otherwise comes across as a standard -- albeit mechanically inclined -- ingénue.

Because work is hard to come by in the margins of the universe, the crew will take any job -- legal or otherwise -- that it can get. (Come to think of it, "Firefly" is kind of a pirate story too.) The first two episodes involve, respectively, a train robbery and the massacre of a group of space settlers by a tribe of roving savages called "reavers." In the first episode, the crew decides to return the loot to its original destination, after learning that it consists of medicine meant for sick miners on a distant planet. (Oh, and it is a Robin Hood story too.) In the second, they help a group of federal marshals escape a marauding settler-turned-reaver (he's gone mad, you see, from witnessing the horror) and in the process lose the cache of valuable provisions they had recovered from the settlers' ship.

The space-explorer story is the natural successor to the pioneer story, because, well, it is one. Replace the meteors with tumbleweed, and just about any space odyssey of the past three or so decades could double as a horse opera. Ever since we started getting pessimistic about the messianic powers of technology and government, most filmed visions of the future have tended toward the primitive and apocalyptic, depicting space as the next frontier -- lawless, violent and cruel. The story usually goes something like this: Some kind of war or blight or economic need sends misfits, malcontents, fortune-seekers away from civilization, looking to get some of its spoils for themselves. Once there, they get in trouble with the law.

Like John Ford westerns, "Firefly's" stories are morality plays, but with a millennial twist. In Ford's moral universe, law and anarchy confronted each other in a showdown, the law won, and civilization rode into town. (In "My Darling Clementine," for example, civilization was symbolized by the arrival of a schoolmarm in Tombstone.) In Whedon's fictional universe, characters exist in a moral void (the prostitute is respected and the preacher is not) that makes the whole good/bad thing tricky, and nobody has a mission. On the face of it, it's a promising idea -- if "Buffy" is a metaphor for growing up in the modern world, as has been said, "Firefly" is about being a grown-up in the modern world. The driving principle of the Serenity's crew is to "find a job, any job," and the harshness of this reality could make Buffy's adolescent idealism look like just that.

Unfortunately, it doesn't. After having created a messianic character driven by fate to battle evil (Buffy has no choice but to slay vampires, even when she'd prefer not to), Whedon's new relativist characters seem a little lost. Admittedly, this is the point, but the show lacks the kind of psychological tension that makes "Buffy" snap. As much as the space and western genres have in common, "Firefly" could have probably done without the western soundtrack and the vague "Bonanza" look too. It's not just that the "space as Wild West" metaphor is somewhat redundant, but that neither genre binds the series to the present.

This is a shame, because some of the ideas that Whedon has talked about exploring in his new show -- existentialism, morality in the absence of God -- are distinctly modern themes that tend to get lost in all the atmosphere. On "Buffy," two distinct worlds come together as naturally as they do in any Gothic horror story, because they are all about the tensions between good and evil that can coexist in a single person or place. "Buffy's" constant pop references add to the conflict by contrasting Buffy's absurd but normal everyday problems with her messianic duties. It's this tension that makes "Buffy" consistently exciting and psychologically complex.

On "Firefly," however, whatever tension there is, is slack. The Alliance is generally -- if not all -- bad; and the Serenity's crew is generally -- if not all -- good. ("We're not thieves. Well, we are thieves. But we're not thieves.") We are meant to sympathize with Mal, even though tiny seeds of equivocation are scattered throughout: His name, as River points out during one of her lunatic rants, means "bad, from the Latin," the independence fighters wear brown shirts, and they say things like "We will rise again."

But despite these deft touches, which bring Mal closer to the type of ambivalent modern hero personified by Buffy, "Firefly's" distinct "Gunsmoke" flavor seems to trap it in amber, casting it in the sepia-toned remove of a period piece and adding nothing. During the train-heist sequence, for instance, a few postmodern nods are thrown in with the period stuff just for fun: There are passengers in pioneer outfits, a woman in a burqa, and a carload of federal Storm Trooper types in hard carapaces. But with nothing to tie them together -- I understand the burqa, but what's with the "High Noon" extras? -- these details are disconcerting, and the result is more Halloween party than interplanetary spaceport terminal during the holidays.

In a recent New York Times magazine piece, Whedon called "Firefly" a "philosophical drama ... about the search for meaning." And that sounds pretty good. As of this writing, however (and the show is only two episodes old, so it seems only fair to give it the benefit of the doubt, considering its creator's track record), it smells more like an archetypal myth sort of thing. (Then again, this may have something to do with network interference. The two-hour pilot Whedon planned has been shelved for now.) At the moment it's a little bit "Star Wars," a little bit "Indiana Jones." And thanks to the work of George Lucas and other Joseph Campbell-inspired visionaries, we probably already have enough of those to last us for the next 500 years.