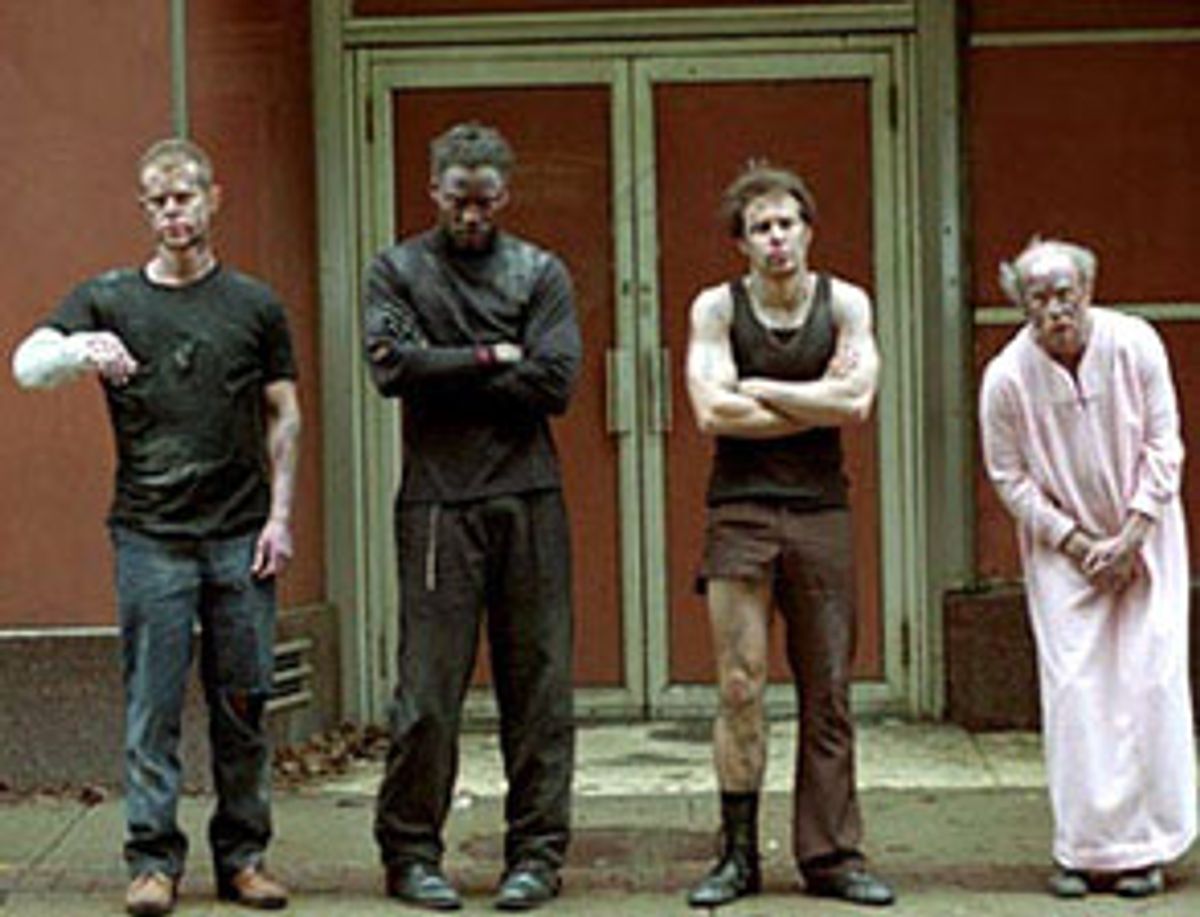 The filmmakers who've attempted to remake "Big Deal on Madonna Street" ("I solitit ignoti") have run into almost as much bad luck as the hapless crooks in the original movie. Louis Malle struck out with his 1984 version "Crackers," and the brother team of Joe and Anthony Russo don't do a hell of a lot better with their new "Welcome to Collinwood."

The freshness of Mario Monicelli's 1958 original was the way it took the doomed romantic fatalism of heist movies like Jules Dassin's "Rififi" and played it for laughs. Where Dassin gave us elegant fantasies of thieves, Monicelli gave us bumblers and fools and lowlifes who we knew were never going to realize their grandiose dreams. And he was blessed with an inspired cast of clowns, Marcello Mastroianni, the great Italian comic Totò, Vittorio Gassman and the luscious young Claudia Cardinale. "Big Deal on Madonna Street" still gives you the pleasure of seeing something that hadn't been done before, though it's present (in spirit if not in actual lifts) in nearly every comic heist movie made since then.

The familiarity of the genre is just one of the problems facing the Russo brothers. A bigger problem is that since the movie is a straight remake that reprises many of the original's scenes, we have those scenes playing in our heads, and the Russos' execution just isn't up to Monicelli's. It's painful to see gags that worked so beautifully fall flat, or wither and die because of indifferent timing.

Some of what the Russos do feels right, like the setting, a rat-hole Cleveland suburb where the clothing and furniture all seem to have been frozen in 1952. It helps the down-in-the-gutter spirit of the movie that it appears no one has done any painting or cleaning since then either. They're lucky in assembling a cast of prize bananas: Sam Rockwell, who uses his leading-man good looks to disguise his goofball's soul; Luis Guzmàn, whom audiences seem to love the way they loved the character actors of '30s comedies; William H. Macy with his hangdog puss carrying the weight of the world; and the gifted Michael Jeter. Jeter, who's probably best known as the homeless cabaret singer in Terry Gilliam's "The Fisher King," hasn't had the movie career he deserves. Jeter, who plays an aging crook here and who, in his baggy overcoat and flyaway hair, looks like a pixie little old man, can make me laugh just by turning up. He's got a few inspired bits here, tottering around in a sports coat that functions as a diaper after he's lost his pants, and one light that functions as a perfect capper to one of the movie's running gags.

Jeter, as well as Macy, Rockwell and Isaiah Washington, all have their best moments in the heist sequence. Maybe because this is the climax of the extended setup, the Russos seem to relax and hit their stride. The laughs in this section come with more regularity than anywhere else in the movie.

But the rest of the cast doesn't have enough to do, including George Clooney (also one of the executive producers) as a wheelchair-bound safecracking guru, and Gabrielle Union, as the sister Washington watches with a hawk's eye. (She's so delectable that when she appeared on-screen you could hear men in the audience moaning in the most exquisite distress.)

"Welcome to Collinwood" doesn't wreck your memories of "Big Deal on Madonna Street." It's too wispy to do that. A few hours after you've seen it, you forget you've been to the movies.