May you never know your place

My son believes New York is his town, and the world is his oyster cracker. Is he entitled to feel entitled? 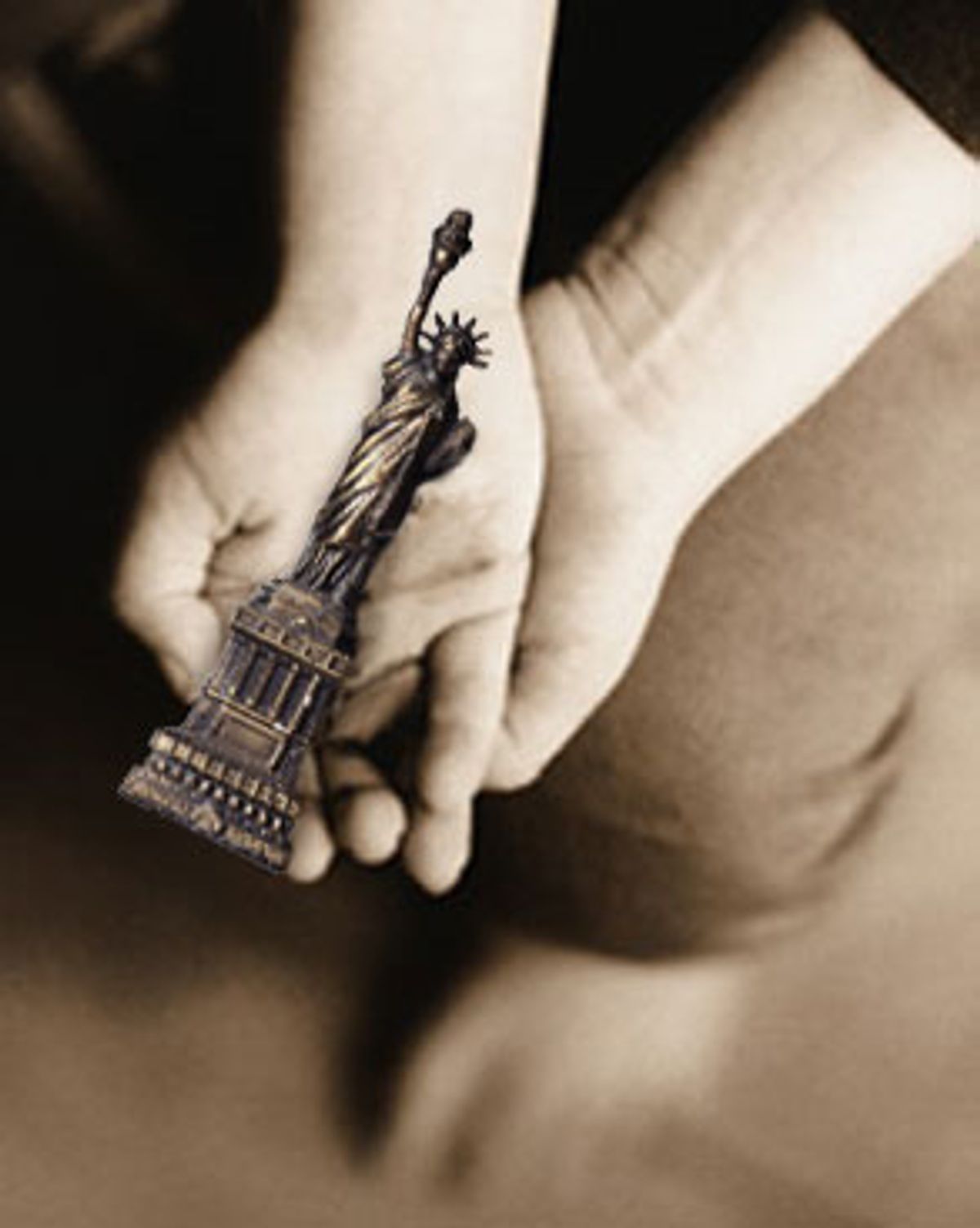 Milo swaggered almost as soon as he could walk. A Manhattan-born boy, he toddled down upper Broadway, assuming that the grove of whipping legs would part before him and that, in the unlikely event of his needing an adult hand, one would immediately materialize. My son is almost 5 now, and he still has that cocky stride. His arms swing emphatically, his shoulders tilt back, and each foot gives the air a little warning kick before planting itself on the pavement. This is his town, his body announces.

It pleases me, this sense of ownership he has in a city whose dimensions he has not yet learned to reckon. Daily, he surveys a landscape dominated by landmarks of architecture and engineering. Beyond the stuffed animals arrayed along his windowsill, the George Washington Bridge flings itself across the Hudson River. He points proudly through the trees in Central Park to the corkscrew of the Guggenheim Museum. When he steps out of the elevator onto his floor -- the 33rd -- he never fails to pause at the picture window to look at the chameleonic Empire State Building, whose illuminated tip changes color depending on the calendar of commemorations. He has seen these imperial grandeurs, and he feels entitled to their existence.

The word "entitlement" has the smell of rot these days. In the parlance of Republican Washington, it refers to all those budgetarily burdensome aid programs that the poor, the elderly and the jobless have come to expect. To voters, the word has dynastic associations: Why should the rich and high-born be entitled to hold public office, they wonder?

Whenever we say of others that they feel entitled to something, the implication is that they shouldn't. Yet Americans, as the world never ceases to remind us, expect more out of life than anybody else. And among Americans, New Yorkers have a reputation for -- how to put this delicately? -- a particularly well-tuned sense of their place in the universe. "Walt Whitman, a kosmos, of Manhattan the son," our expansive local bard proclaimed himself (in "Song of Myself"), and the people of this borough have felt more or less the same way ever since.

I am an adopted New Yorker, but I grew up as an American in Italy, where my visiting countrymen had an obnoxious reputation for oozing a sense of entitlement. They heaved themselves onto crowded buses, spraying the air with English and occupying more space than was their due. They demanded such barbarities as ice in their coffee and ketchup for their pasta, and bit by bit they fed Europe's cultivated resentments.

I cringe now as I cringed then at such displays of arrogance, which, I now see, often get formalized as foreign policy. But I have also come to admire some aspects of that American boldness, the confidence that wherever we go, we have a right to be. We Americans claim the unfettered global right to pollute, police, dictate and consume, but those excesses are the flip side of more admirable examples of entitlement: We also demand the legal leeway to read, worship and make love in whatever ways we choose. We hold it to be self-evident that a child born in the United States in 1997 should be limited only by intelligence and determination.

I look at my son, who girds himself with intense, if temporary, passions, who has at various times expressed the desire to be an archeologist, an astronaut, a paleontologist and a journalist, and I think: Let no one ever make you doubt your right to these ambitions. May you never know your place. You are entitled to feel entitled.

I tell myself that if Milo should choose some serenely modest life -- as a basket-weaver, say, or a pickle-maker -- I would be happy for him. But as I watch him maneuver a Play-Doh knife, I imagine his fingers some day controlling assorted instruments of power: a pen, a steering wheel, a judge's gavel. For now, before his stamina has been tested, his energy channeled or his charm muted by adolescence, I hope that Milo will continue to aspire to the world.

When I consider this, I am dismayed at how willingly I have become a cliché: I have joined the timeless throng of fathers who place one hand on their sons' shoulder and open the other to the horizon and ponderously intone: "Some day, my boy, all this will be yours." And yet, plantation fantasies aside, it is my job and his mother's to help our child map the borders of his world. It's something every parent does, usually without giving it a thought. Every time we buy a toy or deny one, every time we negotiate how many more minutes he can stay in pajamas, every time we respond to a request for attention or give a distracted nod, every time we arrange for someone to play with him for an afternoon, we are helping to form his sense of what he can expect out of life.

And so I find myself urging my son to behave like he belongs and to command whatever stage he's on. The lessons come at the end of little dramas, miniature epics in which the hero struggles, faces his fears and emerges victorious. On the first day of a new session at his summer camp, he cringed behind a pillar, horrified at having to face a new set of counselors and kids and learn the contours of a different room. Twenty-four hours later, he marched through the door with a confident grin -- he had conquered another sphere and he was ready to meet his people.

Even as I high-five these triumphs, though, I am nagged by the fear that, to the extent that I have any control over this child's personality at all, I am breeding obnoxiousness and setting the stage for disappointment. How do you simultaneously inculcate humility and an attitude of limitless possibilities? How do you convey great expectations without also bestowing a princely sense of being owed? How do you teach a middle-class white American boy -- with the whole constellation of privileges that multipart epithet implies -- to ride the world's unfairness in a direction of his choosing, without also teaching him that unfairness is good? How do you make him want to share his sense of entitlement with everybody else?

Well, I take him to the playground.

As a city kid, Milo understands well the difference between his private possessions and his public ones. There are the contents of his room, the toys and mementos and polished rocks that he can handle at will, dole out to friends in a fit of generosity and then duly collect again. Then there is the shared turf of the city. He is entitled, I think, to the network of well-equipped playgrounds distributed around the neighborhood, each one imaginatively engineered to include fiberglass dinosaurs, or a stockade, or a miniature Hudson River, each one outfitted with a working sprinkler, each one meticulously swept at dawn. Needless to say, children who live in less privileged parts of the city do not have access to such lavish public amenities.

But they should. These urban playgrounds are training camps for citizenship -- they are the young person's village green. Here, the city's mortared vastness breaks down. Children recognize each other and reconnect each day, like inhabitants of a small town. Even in affluent enclaves, public playgrounds are the city's most festively democratic spots. Kids of all colors trade tips on acrobatic skills, collaborate in vast construction projects, negotiate hostilities and invent elaborate games.

Within the confines of the playground, the notion of ownership is up for grabs. A tricycle or a ball or a shovel left unattended is considered available to anyone who has the nerve to seize it. Socialism reigns until it's time to go. Then, parents and baby sitters fan out like repo men to collect the errant toys, prying them loose from indignant borrowers, who discover the shock of private property.

The kids who come here are learning the elastic borders between personal and civic space. A swing is mine, and then it's not. I am entitled to a moment alone at the top of this slide, a delicious pause for fear before I hurl myself down its slick, warm track. But if I stay too long, I will be suspected of staking an unjust claim to this square of steel. It's a crowded world; I must obey the rules.

In certain moods, as when he is tackling a new skill, Milo prefers his playgrounds vacant. He attacks the monkey bars with feverish concentration, reaching, swinging, straining and dropping, over and over until his palms are blistered and his armpits ache. But as soon as other kids approach the equipment, he slinks away, unwilling to perform for them before he has perfected his act.

He watches for a while, and sees that his peers, too, are still struggling. He envies the agile, weightless little girls who skip, hand over hand, along the underside of the bars. Soon he returns, having accepted the fact that growing up in a big town is a process of constant public rehearsal. We cannot quarantine our imperfections behind the front door, or wait in isolation until we are gleaming, finished human beings. Embarrassment is part of the job.

"You see New York?" my wife says to Milo from time to time. "This is your city." But already he understands that New York will not sit still for him. Already, Milo has seen the World Trade Center vanish from his skyline, an apartment building rise a block away, and his favorite playground get ruthlessly renovated. At 5, he is old enough to remember New York City the way it used to be.

It is in these moments, when we can suddenly feel the city melting into another version of itself, that the desire to claim it is strongest. A year ago, when the skyline was ripped apart, we New Yorkers discovered that the city was not just a place where we lived and worked and that gave us a sense of style, but a place where we belonged and that belonged to us. Whitman would have understood. In "Crossing Brooklyn Ferry," which he wrote nearly 30 years before the Brooklyn Bridge relegated the ferry to the past, he addresses the distant future. Like a masterly old portrait of a youth gazing vividly out of the frame, he speaks directly to us.

"Just as you feel when you look on the river and sky, so I felt,/ Just as any of you is one of a living crowd, I was one of a crowd ... I too walk'd the streets of Manhattan island, and bathed in the waters around it,/ I too felt the curious abrupt questionings stir within me ..."

It doesn't matter that the masts he thrilled to no longer hem Manhattan, or that he stood in the shadows of buildings that haven't existed for years. The New York he merged with is the same one that Milo surveys from the 33rd floor -- not an immutable geography, but an endless surge of demands, desires, exhilaration and epic pride. It's that Whitmanesque panorama of enlaced humanity that we invoke when we bend down to a child's height and say: "You see New York? This is your city."