When your kids are in the line of fire

A parent in the path of a spree killer has little to offer beyond slim protection and lessons in real life. 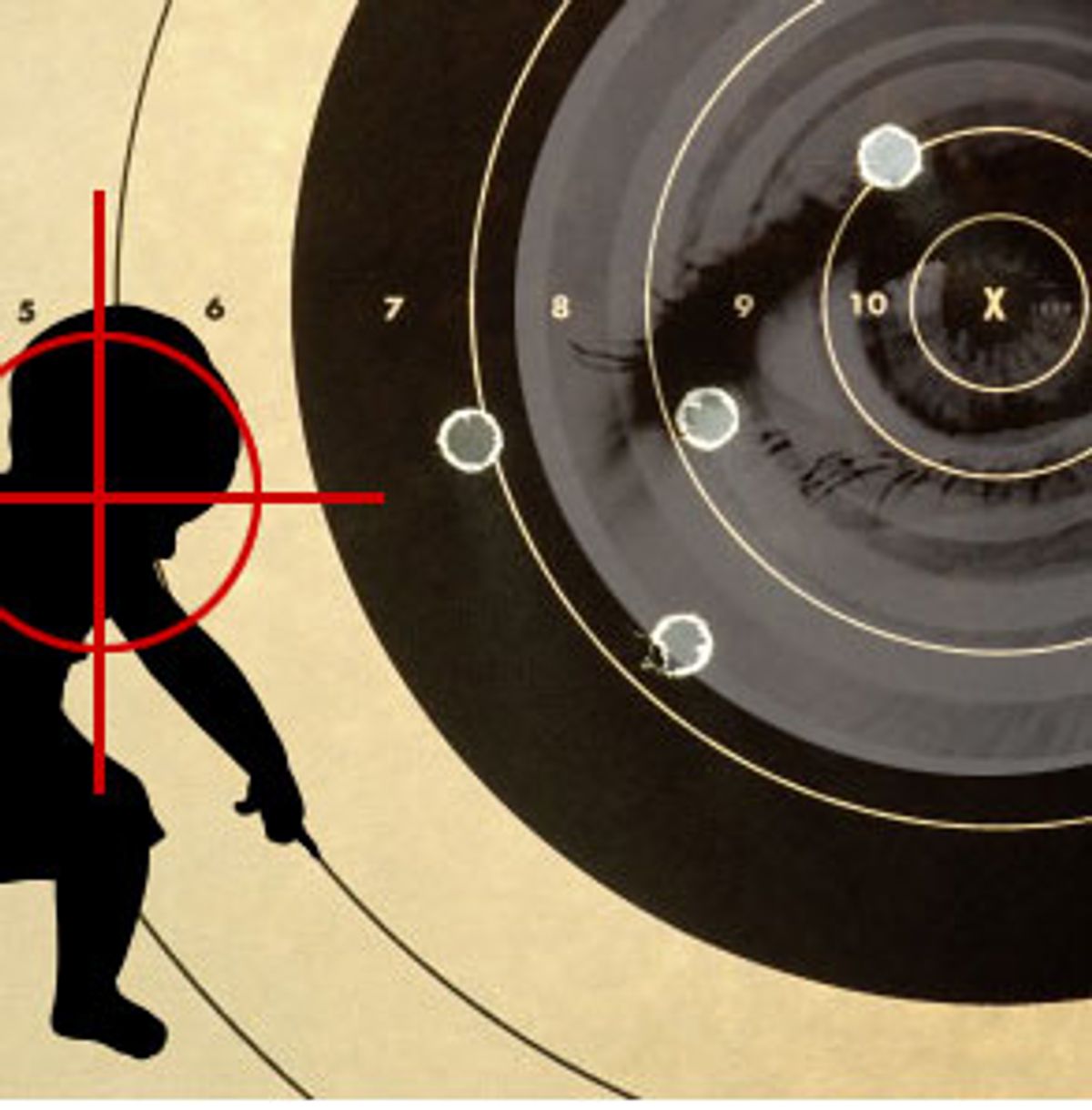 By Friday of last week, six people had been randomly and fatally shot by a seemingly invisible spree killer. One of the victims was a woman vacuuming her car less than a mile from where I live. That day, I was pushing two carts of groceries through a supermarket when my cellphone rang. It was a close friend, a woman supposedly en route from New York to our home outside Washington.

She, her husband and their two young children were coming to visit for a tourist weekend, and I brightened at the sound of her voice. "Hey, we're in Philly," she said, "and we're sort of freaked out."

I stopped moving the baskets. "Why? What's wrong?"

There was a long pause, and then she spoke slowly, the way you address small children when you want to Make. Sure. They. Are. Listening.

"The shootings," she said, with a touch of incredulity. "It looks like your house is right in the middle of them."

Our home was indeed in the midst of the tragedy that began officially the night of Oct. 2 when a 55-year-old man was shot and killed in a parking lot and became full-fledged bedlam on Thursday, Oct. 3 when five more people were killed. (That was before the killer had widened the circle of his bloody sport south to Fredericksburg, Va., and east to Bowie, Md.)

I had been riveted -- and shaken -- like everyone else I knew. The mere sight of my two sons after school on Thursday had released in me a sense of relief so profound that my boys smelled my fear. "What's wrong, Mommy?" they demanded in a tone that telegraphed they'd rather not know.

Yet a day later, I was telling my New York friend that everything was peachy, thanks. The kids were back in school (albeit under "Code Blue" restrictions to keep them locked indoors all day). Washington was humming along unremarkably when I rode the subway downtown for an appointment that morning. "We're just going about our normal business!" I chirped.

I must have resembled some turn-of-the-century British explorer stomping around the Arctic and shouting "Brilliant!" as the ice closed around my ship. My denial was as soothing and strong as Percocet after a C-section.

But that was before a 13-year-old boy was shot at his Bowie middle school Monday morning. Before his aunt, a surgical nurse, heard a gunshot seconds after dropping him off, before she rushed back, half-carried him into her car and raced him to a nearby medical center. (When does she get a presidential citation, by the way?) Before parents streamed back to Benjamin Tasker Middle School looking stunned but guiltily grateful that it wasn't their son or daughter.

As I drove to work, my husband had reached me by cellphone, his voice grim. Minutes later, inside the office, my stomach knotted as we watched live television reports of parents hustling their children away from Benjamin Tasker. The tableau was sickeningly familiar: We had seen the events of Sept. 11 unfold in front of this same TV a year ago.

Once again, those of us who live here watched in dread, working to stifle the anxiety rising in our throats. We were trying mightily to be good citizens and obey school administrators who asked that we leave our children in area schools, because they were safer there. We tried to believe that -- until the latest victim was shot at school.

Since the shootings began, my phone had rung repeatedly at work -- all women friends who are mothers. "I'm trying really hard not to swoop," said one, describing her clutching need to shut down her computer and collect her two daughters from school.

"Can you believe this?" asked another, who only recently moved here from Atlanta. Three days earlier, we had scoffed at the thought of changing our routines. But Monday morning, her voice trembled with anger and disbelief. The gunman had hurt a child, and as Montgomery County Police Chief Charles Moose had said, "now we're stepping over the line."

E-mails popped up on my screen from the Montgomery County Public Schools listserv, advising of one cancellation after another. No outside recess. No extracurricular activities. No field trips. No foreign language instruction after school. "Given these uncertain times" began one.

Before lunchtime on Monday, a fellow carpool mom and I debated by telephone about whether to send her babysitter to pick up our children when school dismissed at its regular time, as usual. They'd been locked inside since the shooting that morning. Would they feel at risk of harm, even though the shooting occurred at a school some 15 miles away? Would our two preteens need a parent's presence to make them feel secure?

Unspoken, too, was a most disturbing and obvious thought: What if the sniper had traveled back our way and chose our kids' school to strike again? We would never forgive ourselves for not being there.

The babysitter called, saying politely that she'd rather not go. I'd already made up my mind to be there. The kids smiled when they saw me inside the main entrance hall. Once in the car, they razzed each other in that giddy way that middle-schoolers do during times of trauma, their voices tinged with false (but welcome) bravery. Their relief at having dodged a bullet was tangible, and I shared it despite feeling that I couldn't say so out loud.

As parents, we've a surfeit of Web sites and counselors willing to advise us on how best to parent during terrifying times. But if we listen, our children let us know what they need. They are our early warning systems, as sensitive to changing emotional weather as birds before a storm.

One colleague's 8-year-old daughter spent the better part of Monday afternoon in the school nurse's office with a stomachache and headache. Another's son, also 8, suffered the same distress. My younger son, nearly 9, dreamed last night of joining an elite military unit. And my best friend's fourth-grade son, a wry, deep thinker with a penchant for baseball stats, has been picking off imaginary targets with his finger-turned-gun.

My eldest, nearly 12, is more direct. Last night, he announced brusquely that we shouldn't alter our routines one bit. He was already working up a righteous anger about the possibility that his class field trip on Thursday would fall victim to sniper fear.

"I mean, if it's going to be your last day, you might as well live," he said defiantly.

This morning, my colleague's 8-year-old daughter (the one with the tummy aches) asked whether she could have a bulletproof vest. Her mother said no, that her parents and teachers and police were doing everything in their power to make children safe. Her third-grader responded with wisdom well beyond her years: "They're keeping us safe, but not happy."

I worry about what children can handle, not only because I'm a mother, but also because of my work. I've been steeped in the lives of traumatized children as director of the University of Maryland's Casey Journalism Center on Children and Families, a training and resource program for professional journalists. Since last spring, we've focused our work on how the media can best cover child trauma, whether it involves children harmed by terrorists or those chronically neglected or abused by their own kin.

I've heard one expert after another talk about the ways in which parents can help. I know to let my sons get angry, to listen and hold them through their fears. I spend extra time in bed with them at night, patting their backs and quietly singing the songs of their babyhood. Harder still, I nod without judgment at their dreams of revenge -- dreams I share in my angrier moments -- and commiserate about canceled field trips.

I remind them of how good life is, and of what we have. But I concede that life isn't always fair, that it's risky, and that bad things do happen to good people. I tell them we're doing our best to protect them.

I just wish I didn't have to.

Beth Frerking, a print journalist for 20 years, is director of the Casey Journalism Center on Children and Families, a program of the University of Marylands Philip Merrill College of Journalism.