An administrator from the popular Web site says long-range marksmen are being smeared by the media. 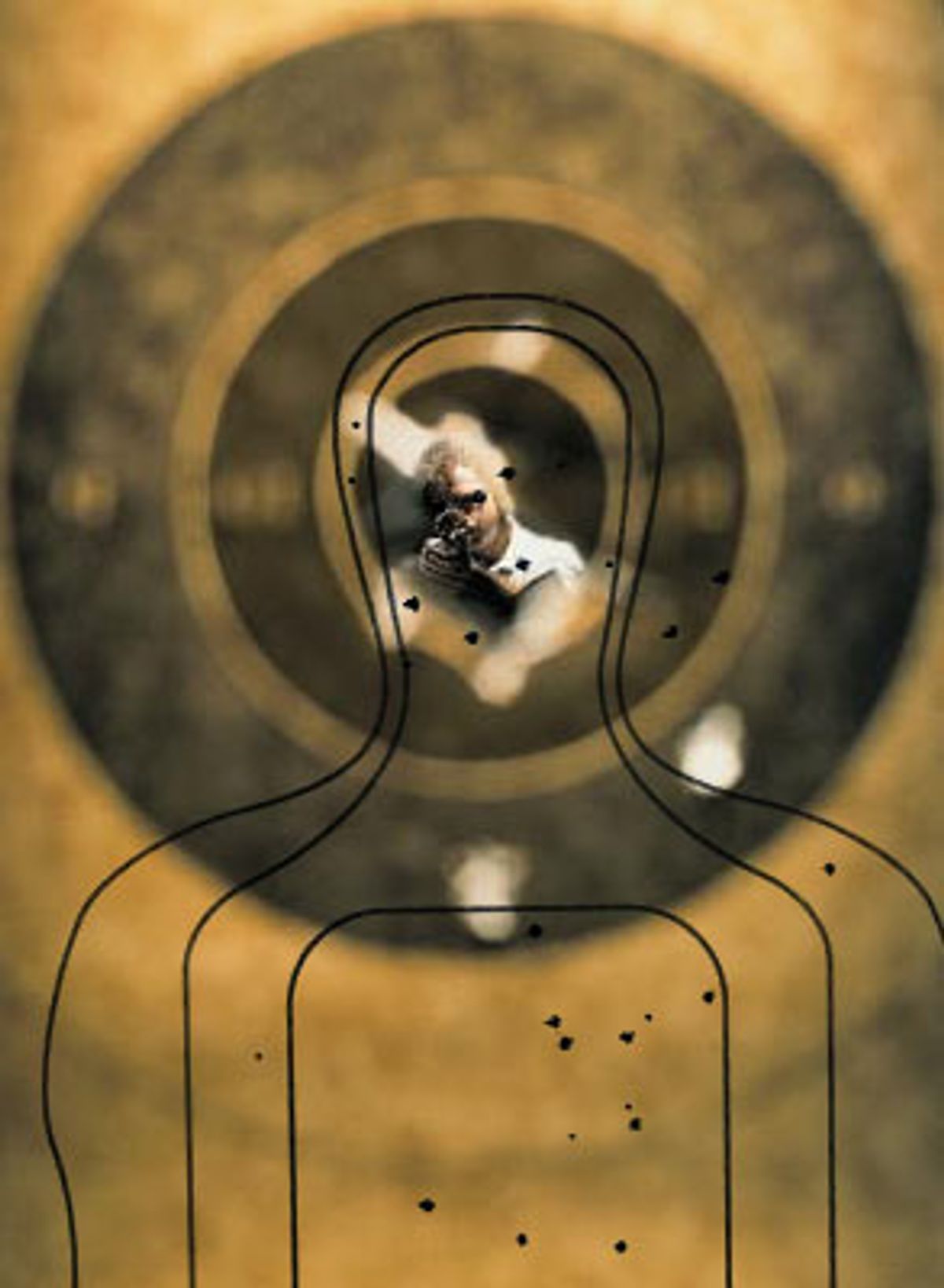 Snipers are skilled specialists in the U.S. military -- particularly in Special Operations units -- and to a lesser degree in police department SWAT teams, which often use snipers as a tactical component in police raids and in hostage rescue operations. For military snipers particularly, precision marksmanship is only one of several skills required. Others include stealth, stalking, and concealment -- basically the ability to conduct surveillance in the field and get away once you've gotten off the key shot.

Over the last decade, says Tom Diaz of the Violence Policy Center, there has been increasing civilian interest in the weapons, methods, and mythology of sniping. A simple visit to Amazon.com reveals dozens of books about the history of sniping, the craft and techniques, how-to guides for sniping and worshipful paeans to sniper heroism. A recent movie, "Enemy at the Gates," dramatized a duel between snipers at the battle of Stalingrad. There's also a long list of sniper Web sites with information on sniping, schools to obtain training, the latest equipment, and bulletin boards filled with talk about various sniping issues. The allure of sniperdom is captured in the motto "one shot -- one kill," a phrase that captures the mix of precision, patience and lethality which is at the heart of what professional snipers do.

According to Diaz, who authored a 1999 report on the sniper subculture, the gun industry as well as gun advocacy groups like the NRA have catered to the growing sniper subculture by marketing weapons specially designed for sniping as well as instructional books, videos and Web sites that teach the techniques and mythology of the sniper's craft. "I'm certainly not going to advocate censorship," Diaz told Salon on Monday. "But it cries out for political and ethical and moral leadership. We're teaching people skills and techniques that have only to do with killing people."

Also of concern is the ease with which civilians can obtain advanced sniper training. Many of the luminaries of the sniper subculture are ex-U.S. military snipers who've gone into business writing books, producing videotapes and in some cases training sessions. One of the gurus of the sniper subculture is Maj. John L. Plaster, who runs Ultimatesniper.com and is the author of books like "The Ultimate Sniper: An Advanced Training Manual for Military and Police Snipers" (soon to be out in a new Spanish language edition.) Some ex-military instructors will only train military or police in the craft. Others will teach more or less anyone who wants to learn.

On Tuesday Salon conducted an e-mail interview with the administrator of one of the most popular sniping Web sites, Scott Powers of Snipercountry.com.

Can you tell us the range of people who are part of the sniper subculture, from military professionals to civilian enthusiasts, and how what they do may or may not relate to what's happening in the D.C. suburbs?

I have to point out to you at this stage that the "sniper culture" does not really exist. It seems to be a media-created buzzword in reaction to the murders in Maryland and Virginia. Most long-range precision shooters get into their hobby for reasons of competition and improving their skills, but it does not make them "snipers." They are simply your average marksman who wants to improve. Show me any athlete who does not.

I am not sure how the media got this idea that there is some vast culture of people out there who consider themselves snipers. Being America, people spend money on any number of things and in the shooting community, that can be precision rifles or classes on how to effectively use them. I even know of an organization that competes with old Civil War rifles because their interest in history brings them to the conclusion that they want to test themselves with those old smoke poles. But none of these people fool themselves into thinking they are real snipers.

A sniper in this country is either a law enforcement officer trained and tasked with ending hostage situations or a military person tasked with depriving the enemy freedom of action. In both cases these people save far more lives then they ever take in action. The idea that there is a "sniper culture" out there would be humorous if not so misused by the media. They currently are trying to paint this image of a bunch of wackos running around the country because, I suppose, it makes for good TV or print. The simple fact is, you are not a sniper unless you belong to one of the two categories listed above. And if you take the training via any number of schools out there, it still does not make you a real sniper, qualified and duty slotted to the job.

After Sept. 11 many American Muslims and Arab-Americans felt they were tarred with guilt by association with the al-Qaida terrorists. Have sniper enthusiasts and professionals experienced something similar?

It's been hectic. We created and maintained the site as a way to educate the public about the misunderstood and often very hard role the military or police sniper has to perform in the course of his duties. Often hated by both the enemy and even his own troops, snipers have long been portrayed as either supermen or murderers when in actuality these hard-charging individuals have saved many lives through their actions. It was not until the late 1960s that our military finally got it and made a serious effort to keep a fully trained cadre of individuals available for time of war. Our site started out as a way to give these folks, and the increasing number of police tasked as sharpshooters, a place to meet and talk. It grew into a place for them to go to read about new products of interest to the community. It then exploded into a site where anyone with an interest in history could go to learn more about the subject or learn to improve their own skills at long-range shooting, which, if I am not mistaken, is still considered an honorable sport in every circle other than with the anti-gun organizations and a few misguided editorial writers in the media. If you've ever taken the time to visit a High Power match or Tactical match, you'd see that the individuals there are very normal (police, soldiers, former soldiers, lawyers, doctors, welders, pilots, trash collectors, store clerks, you name it), but like any athlete, very serious about their sport and winning. The idea that these folks are to be looked upon as a subculture of death or some other media-derived sound bite is laughable.

What you have in D.C. is a serial killer and nothing more. The skills he has shown have nothing to do with sniping. In fact any nut with a gun and the will to misuse it could do what he or she is currently doing. To call them anything other than what they are, serial killers, does a disservice to the many dedicated marksmen who have accepted the call to defend the country using their unique skills.

The funny thing is that the site has, to our surprise, given both military and police personnel a place to learn. You may be surprised to know that most competitive shooters are far more knowledgeable about long-range shooting than either the military or the police (it's interesting that so many people can shoot at really long ranges and yet except for this nut in D.C., you never hear about it. That should tell the media something: Real shooters are honest and honorable citizens and nothing more). Often our site is thanked by individuals in both the military and law enforcement because they have been able to come to the site and learn something new that they were not aware of. The difference is that civilian shooters have the budget to play with new gear whereas most law enforcement types are limited to only what their department can afford, which is usually next to nothing. Often these sharpshooters come to our site to learn what the civilian competitors use ... a Test and Evaluation as it were, because it saves them from making a mistake in purchasing the wrong gear.

Media attention to the sniper subculture has grown rapidly over the last several days. Can you tell us about the crash of attention?

I am actually quite burned out on this thing and do not really wish to be tied in with what is going on in D.C. It's akin to the media coming down on a magazine dedicated to car racing because over 50,000 people die each year as a result of reading their product. Our site is a source of information and history. It is not responsible or tied in any way with cult groups or serial killers. So in short, I probably have nothing to really offer as I cannot imagine what would drive a person to commit the acts being perpetrated in the D.C. area. I am willing to answer questions via e-mail if the tone is not the one being set by the likes of the NBC "Today" show or the N.Y. Daily News, but to be honest, if I get one more phone call on the topic I think the thing is coming down off the wall. It was that bad the other day!