How to catch a wild young king

Hot for Prince Harry or Prince Felipe? Better learn to race cars and sail yachts, advises "Young, Sexy & Royal." And whatever you do -- don't curtsy! 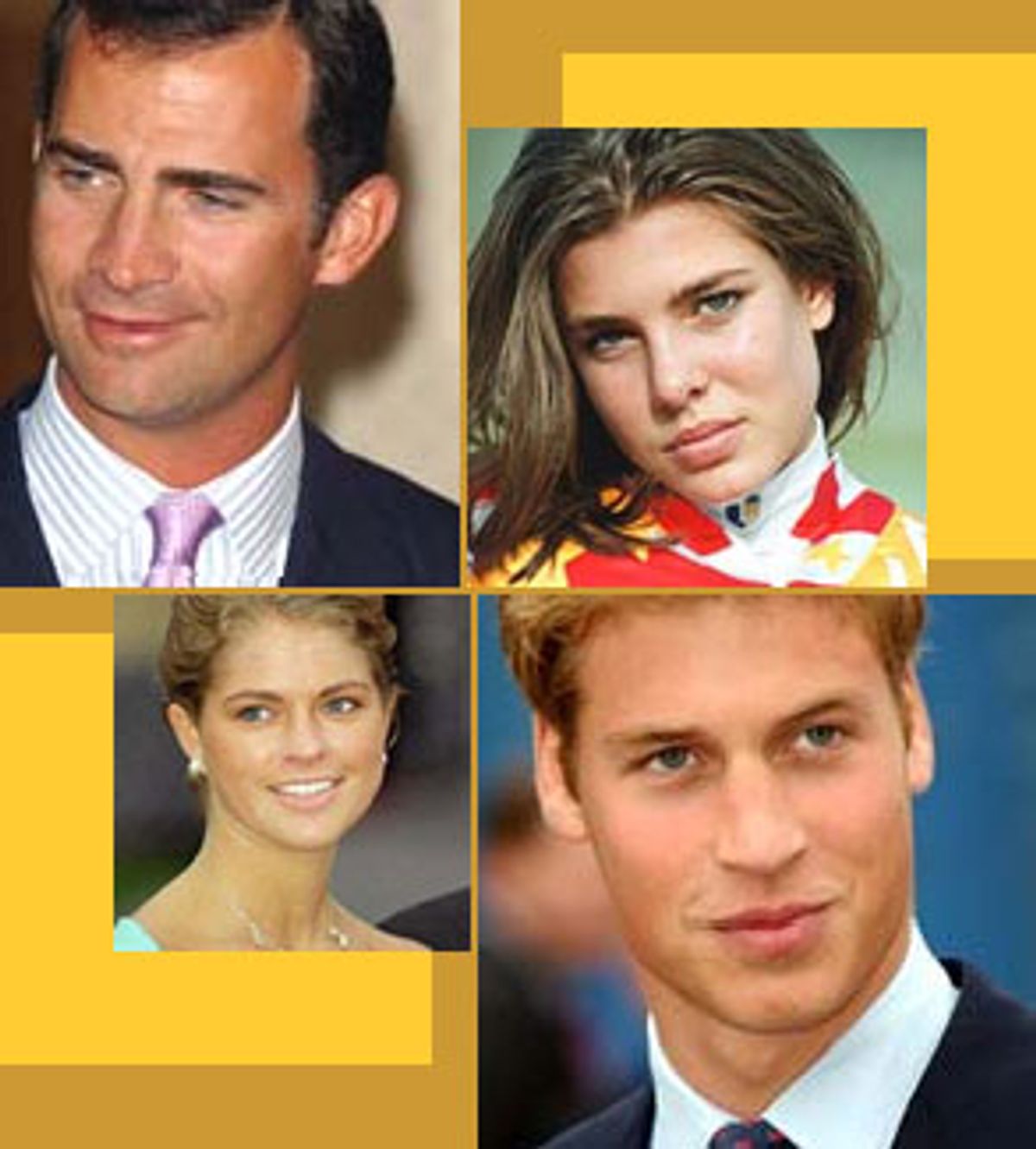 My family moved to Spain one day after Prince Felipe turned 9 years old -- and one day before I did. My grandmother read about the future king's birthday in ¡Hola! magazine (a weekly glossy dedicated to the observation of stars, models and royalty, or, as it has traditionally and succinctly referred to all of them, just plain famosos), and decided that the fact that he was two days my senior made our eventual betrothal not only possible but pretty much a sure thing.

After watching an advance copy of "Young, Sexy & Royal," which airs Sunday night on WE (Women's Entertainment), I once again have reason to believe. According to Village Voice gossip columnist Michael Musto, just one of the many royal sexiness experts consulted on the show, "It's a better time than ever for a commoner to marry a royal."

Prince Carl of Sweden is dating a P.R. girl, Prince Felipe -- "biggest catch in the royal pond" of Spain -- dated an underwear model whose father managed an auto repair shop, and Prince Haakon of Norway married a former waitress with an out-of-wedlock child. That's all fine. But, honestly, what could be commoner than me, lying on the couch in boxer shorts and knee socks, drinking beer from a bottle and watching "Young, Sexy & Royal"? Whoo-doggies. I've got to call my grandmother. Things are looking up!

Not content to slavishly observe, "YS&R" (as the show affectionately addresses itself) also offers valuable sexy-royal-catching tips. "If you want to get a date with Peter [Phillips, Queen Elizabeth's favorite grandson], I think the best thing to do is to get on the Formula One racing circuit," suggests Hello! royal correspondent Judy Wade. "Add a few syllables to your name and that's a good start," offers People magazine senior editor Anne Marie O'Neill. "Then I would say maybe learning horse riding. You'll probably want to hang out at some of the beaches of St. Tropez and maybe find a rich person with a yacht."

That's easy. But once there, how should you act? You'll be relieved to learn that royals are fun-loving, down-to-earth, and well, regular, what with their tongue studs and eating disorders and scary brushes with rehab and billion-dollar inheritances. In any case, a familiarity with protocol is apparently not required with today's young sexy royals -- in fact, it will brand you as totally uncool.

An editor at the British edition of People magazine tells this harrowing story of reverence misfired: A young American student at St. Andrew's University who was "very keen" to meet her classmate Prince William made the mistake of curtsying when she met him, to the hyena-like amusement of the surrounding crowd. Prince William may be the heir to the throne and a billion dollars in prizes, but at school he's just Will Wales.

"Don't mistake the hot young royals of today with their conformist parents," "YS&R" warns. "They're sexy and vibrant, always testing the boundaries as they pursue their dreams of love, success and personal fulfillment."

Personal fulfillment can mean so many things. For Zara Phillips, it can mean getting a tongue stud and brawling with her boyfriend in public. For Prince Harry, it can mean the freedom to buy fur-lined thongs for his model friends. For Prince William, it might mean e-mailing Britney Spears and then blowing her off to go fox hunting. ("I guess Britney wasn't 'foxy' enough for him," Musto offers.) For Peter Phillips, it could mean drawing a $72,000-a-year salary from Jaguar despite, you know, the multimillion-dollar trust fund.

Americans have long had a thing for the Windsors, but the royal sexiness of Sweden's royal siblings, for example, has been woefully neglected between these shores. There's also Crown Prince Frederick of Denmark, who "YS&R" informs us is "just one of the exciting young royals who just aren't that well known, and should be." Aside from a fresh new angle from which to ponder our inadequacies, "YS&R" brings to American audiences what European readers of Hola! and Hello! have long enjoyed: A heretofore relatively untapped subset of privileged people to ogle, envy and dream about, depending on your disposition.

Thanks to efforts like this, a whole new crop of people who wear sashes over their evening gowns, despite not competing in beauty pageants, may soon be shoving Britney, Cristina, Brad and Jennifer aside on the racks in your local supermarket checkout line. Which sure sounds like a royal something or other.