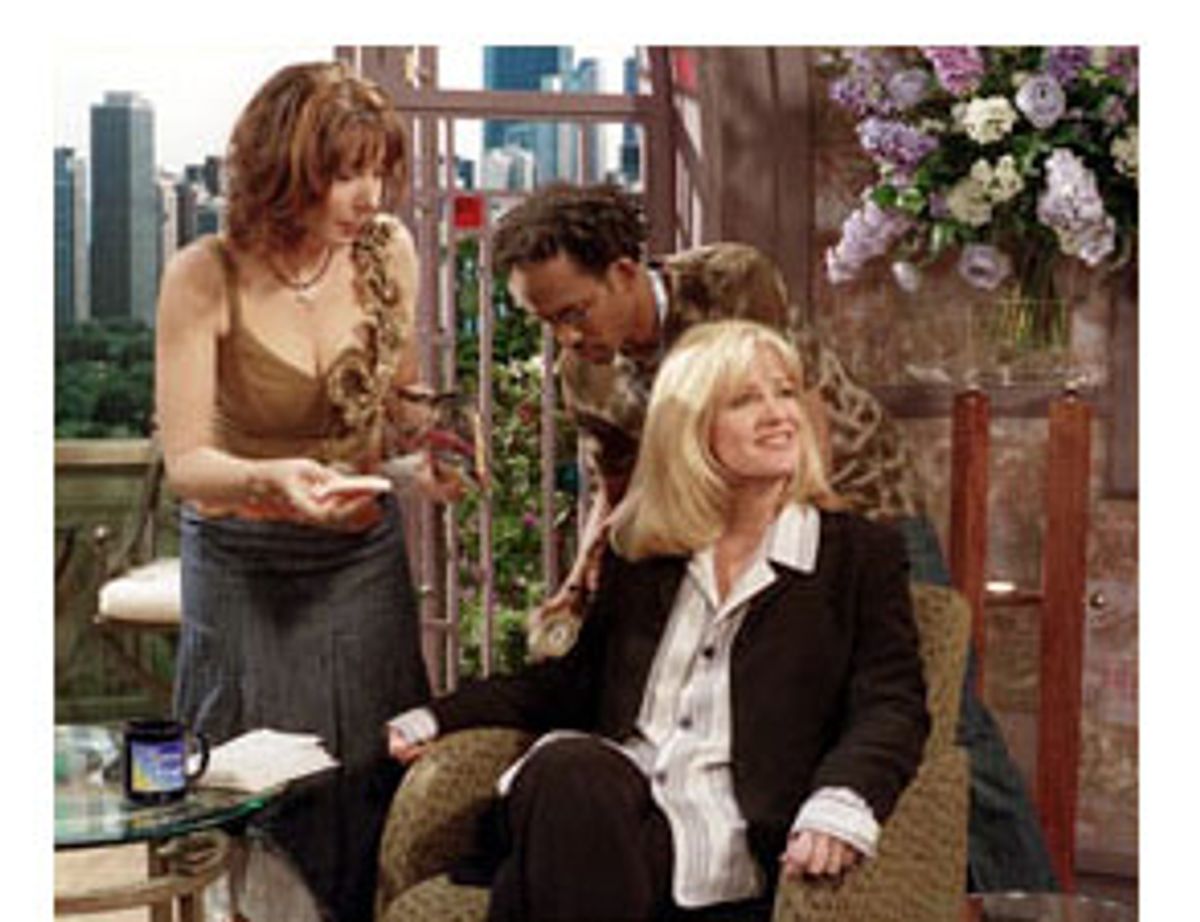 "Life With Bonnie" (Tuesdays 9 p.m. on ABC) is one of the few, the proud, the extremely rare funny new comedies to debut this fall. The show stars Bonnie Hunt as this year's emerging It character, the frazzled working mother. Together with Allison Pearson's new novel, "I Don't Know How She Does It," Hunt's show provides a sassy counterpoint to the somewhat wilted single-girl genre: The silly-busy-mommy in the city.

Hunt, a veteran of the famed improv comedy group Second City, is one of those people whose talent far outweighs her luck. Both of her previous TV comedies were shot down over Burbank -- even though critics loved them. But "Life With Bonnie" marks the first time one of Hunt's shows has been scheduled in a time slot that doesn't throw her in a foxhole with a hand grenade.

On "Life With Bonnie," Hunt plays a loopy local morning talk show host. The character is similar to two bygone Bonnies, including Bonnie Kelly, a TV reporter on "The Bonnie Hunt Show" (1995-96), and Bonnie Kennedy, a struggling actress on "The Building" (1993). This Bonnie lives in Chicago with her distractingly handsome doctor-husband, Mark (Mark Derwin, looking very much the soap opera doctor he plays on "One Life to Live," a character that, luckily for prime-time viewers, fell into a coma just in time); three realistic kids of normal human cuteness levels, who don't walk around sounding like jaded, Noel Coward-loving gnomes; and a somewhat slatternly nanny who calls to mind "The Brady Bunch's" Alice, if Alice's bun weren't quite so tight.

For this show, Hunt has once again assembled a cast of close friends, many of them former Second City collaborators. Don Lake will appear as various guests, David Alan Grier plays her beleaguered producer and Holly Wortell plays the show's makeup artist. "I've always hired all the people that I know," Hunt said in a phone interview last week. "Because they are the most talented people I know."

The show's scenes are more or less evenly divided between scripted (Bonnie at home) and improvisational (Bonnie at work). The home scenes are good. When I try to put my finger on why, Hunt offers, "Because the parents are actually smarter than the children, and neither of the parents is a big buffoon, and it's accessible and truthful and doesn't play down to the audience." Right. That's why.

The work scenes -- some of which are partially scripted, but many of which feature "real" guests and are mostly improvised -- are inspired. In one indescribably daffy episode, David Duchovny plays Johnny Volcano (ni Victor Volcano), a majestically vain weatherman who comes on the show to promote his 15-minute directorial debut after another guest drops out at the last minute. His film, in which separated-at-birth good and evil twins (both played by him) learn that they have the same father but different mothers, has, according to Johnny, created a lot of buzz. "In the film community?" asks Bonnie. "In the weather community," he deadpans.

Hunt, who has been a guest on David Letterman "more times than I can count," has been called "the best guest in America." And the idea for "Life With Bonnie" came about while she was in talks to take over Rosie O'Donnell's talk show. "But I didn't want to stop writing and directing," she says. "I love being a storyteller and I didn't want to give that up. So, Don Lake and I were just sitting there and we said why don't we just do a sitcom where I can write the family material that I love to write about and then have an actual talk show where I can have guests on and really interview them and improvise? And that's what we did."

"Life With Bonnie" was recently rewarded for its efforts with an early full-season pickup, which means there will be nine more episodes produced this year, all of them written by Hunt and her co-producer Don Lake. Though she and Lake wrote the episodes from the beginning, the network wanted to hire a writing staff for the original 13-episode commitment. When none of those writer's scripts were used, the staff reverted to the original two.

Hunt is known for doing things differently. In fact, she has in the past turned down roles on hit shows like "Designing Women," "Mad About You" and "Home Improvement" because she wanted, as she has said, to "try a different approach to television."

"We're not a top-heavy show," she says. "It's just Don and me producing and writing, and I direct. We work side by side as a team, and the cast is very involved in the creative process. Our cameramen are right-on because we shoot the show very unconventionally. (The two segments of the show are filmed on different days in front of different audiences.) We actually believe that people are listening," she says. "We very seldom write jokes. All of our humor comes from a character point-of-view ... So much sitcom humor is angry."

Hunt avoids the joyless insult-trading that seems to make up most (bad) sitcoms. (Though, if insults were a commodity, you could make a fortune just by monitoring the networks. The main difference between "Life With Bonnie" and other shows is that it actually looks like fun. When Hunt laughs, you laugh with her, and not in the corny smile-and-the-whole-world-etc.-etc. sense, but because she laughs like someone who hasn't seen the joke coming since the previous Tuesday. It's contagious. Plus, Hunt seems giddy with happiness -- it's not something you see very often in comedy.)

"We're so thrilled with the show and we're so proud of it," she says. "We worked so hard to maintain the creative integrity and it's just been a joy to see people respond the way they have. You kind of do the work hoping your mom will be pleased and it's a bonus when so many other people are."