Kathleen Kennedy Townsend may be able to salvage her race to become Maryland governor because of her gun record -- and the sniper terrorizing her state. 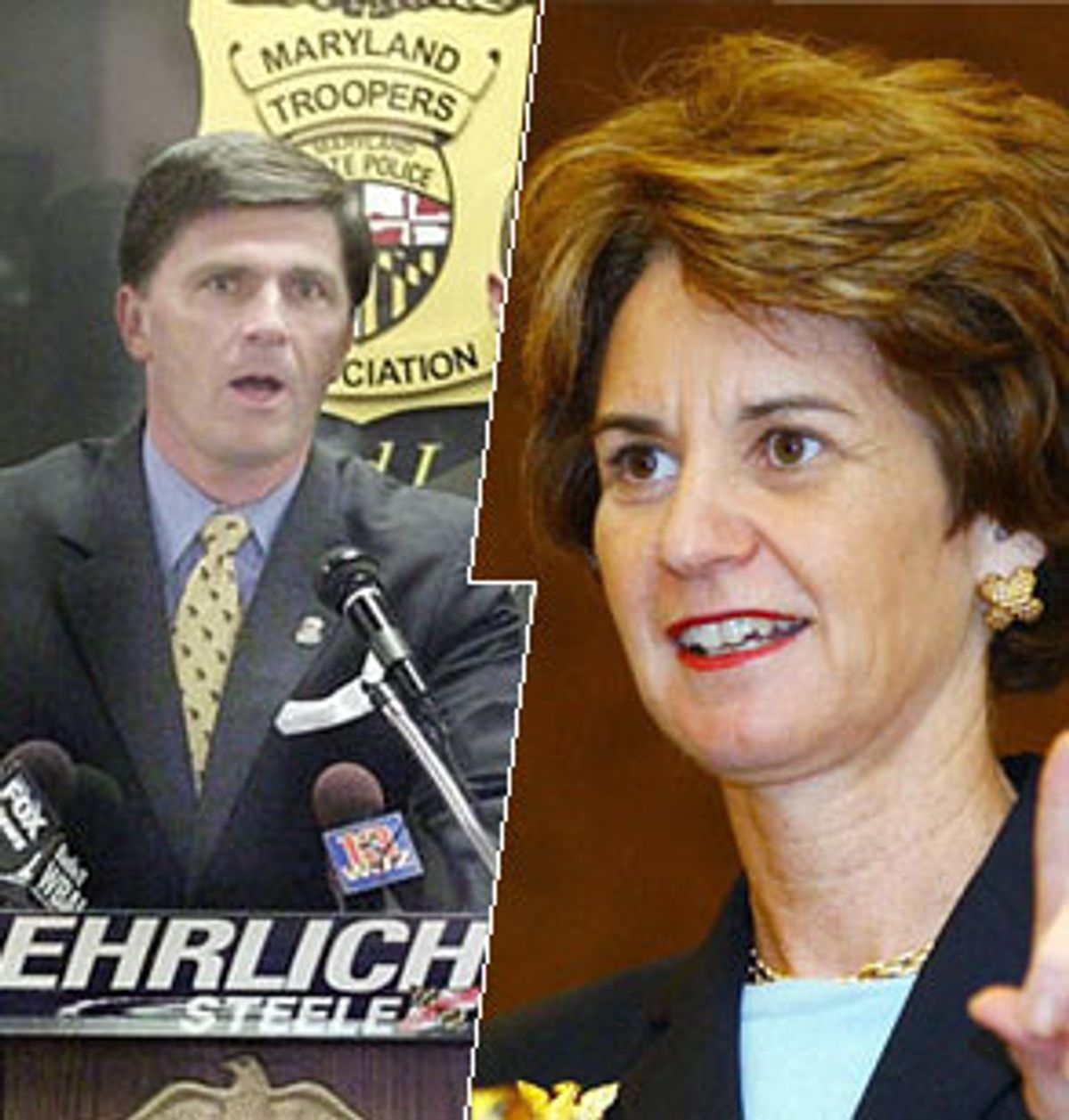 This suburban area has become the new ground zero for American paranoia. High school football games are relocated to undisclosed, secret locations. School recesses are moved indoors. People are told to zigzag as they walk down the street, and duck for cover while filling their gas tanks. Groups of friends hug when they say goodbye, telling each other to "be careful" without ever mentioning the sniper.

Fear of the sniper has penetrated the sense of security of daily life in Maryland, from Bethesda to Baltimore, Aspen Hill to Annapolis, in subtle but profound ways. And it has changed the political debate in one of the country's most hotly contested governor's races between a Democrat, Lt. Gov. Kathleen Kennedy Townsend, who is a strong proponent of gun control, and a Republican, Rep. Robert Ehrlich, R-Md., who thinks the state gun laws may have gone too far and is on record criticizing the type of ballistics fingerprinting that is used by Maryland and is now being considered for the rest of the nation.

Meanwhile, Townsend, the eldest daughter of slain former attorney general and senator Robert F. Kennedy, is trying desperately to hang on to her once formidable 28-point lead over Ehrlich. After a summer of campaign missteps, including criticism of her choice of a white running mate as Ehrlich picked the state's black Republican Party chairman; having to fire a campaign consultant Julius Henson, who called Ehrlich a "Nazi"; and enduring criticism from some Democrats that she was an ineffective campaigner, that lead has vanished. The two are locked in a statistical dead heat, according to recent polls. And now there is a sniper terrorizing the good people of Maryland.

Some say that may wind up favoring Townsend, who has not shied away from making guns central to her campaign. And that rankles Ehrlich. Ehrlich spokeswoman Shareese DeLeaver says Townsend has shamelessly used the sniper attacks for political advantage. "This is an ongoing tragedy. It's not a time to grandstand politically. It's a time to pray for the families," she said. She points to a new gun-control ad the Townsend campaign is airing, saying "Their modus operandi from the beginning has been scare tactics."

Townsend says she's focusing on education and healthcare. But, she says, "certainly the issue of guns and common-sense gun laws has become an issue. He raised it before the sniper," she says, a reference to Ehrlich's earlier statements that the state should review its gun laws, including the ballistics fingerprinting database.

She scoffs at insinuations that she is using the sniper attacks for political advantage. But she says, since the attacks, guns are on people's minds, and should be among the issues talked about in this campaign. "I think that he's taken a very bizarre position, that we shouldn't discuss it, and that people shouldn't know his record," she says.

In Maryland, gun control is generally considered good politics. The state has some of the toughest gun control laws in the nation. Under a law passed in 2000, ballistic information, known as a "fingerprint" from all new handguns are required to be entered in a state database. One of only two states (New York is the other) to have such a system, law enforcement officials and gun control advocates say the database is a valuable tool in assisting law enforcement. But since being enacted in 2000, the database has traced guns to only two crimes in the state, and neither of those cases have led to an arrest. That led Ehrlich to question whether the $1 million database was working.

That has changed since the sniper attacks began. The law does not demand ballistics information from rifles like the one the sniper is using, a compromise reached to help appease lawmakers from rural areas. But since the attacks began, both candidates have talked about expanding the database to include rifles.

But Ehrlich spokeswoman DeLeaver says Townsend's campaign has distorted Ehrlich's views on gun legislation. "He would like to take a look at it and see why it hasn't aided in fighting crime," Deleaver says about fingerprinting. "He wants to talk to the people who actually use it. If it works, fine, let's see how it can be expanded. Our opposition and her surrogates seem to think that 'review' is a dirty word. It's not."

Ehrlich, a member of the large Republican freshman class of 1994, has tried to focus voters' attention on the state's budget problems. Faced with a $2 billion budget deficit, Townsend has tried to distance herself from her controversial former running mate, outgoing Gov. Parris Glendening, while Ehrlich has pointed to the Glendening/Townsend administration as the source of the state's fiscal woes. In that respect, this race is a mirror image of many of the congressional races around the country. Here, it is the Republicans who want to focus on the sluggish economy, and the incumbent's mismanagement of government finances. If you close your eyes while Ehrlich gives his stump speech, there are moments you'd swear you were listening to the Senate majority leader, Tom Daschle, D-S.D., railing against the White House.

But the subject of guns is unavoidable. On Sunday, Ehrlich is having a religiously diverse day: Baptists in the morning, Jews at lunchtime, Catholics in the evening. After a morning tour of Baptist churches, Ehrlich has come to Baltimore's Yeshivat Rambam. A group of about 200 Orthodox Jewish Ehrlich supporters are gathered in a kind of makeshift auditorium that, judging from the three mobile basketball hoops pushed off to the side, doubles as a gymnasium. Most of the people in attendance are Republicans, like Abba David Poliakoff, who is introducing Ehrlich. Like many Maryland voters, public safety is a big issue for him this election. And in introducing Ehrlich, he sketches his public safety concerns by citing Jackie Mason.

"We don't see many Afro-Americans walking into Jewish neighborhoods and saying, 'Oh my God, we're going to get mugged by an accountant." While this is a crowd concerned about public safety, that doesn't necessarily mean gun control. Still, it is not long into the question-and-answer session after Ehrlich's stump speech that the issue of the sniper, and gun control, comes up.

Ehrlich says he and Townsend have a "philosophical difference" on the issue of gun control, and voices his support Project Exile, an NRA-supported plan to aggressively prosecute criminals who use guns. Ehrlich says this type of enforcement of existing gun laws, not new laws, are the answer to curbing violent crime.

Ehrlich tries to shift the focus from some of his pro-gun votes, like a vote against the assault weapons ban and against outlawing small, cheap handguns known as Saturday night specials. He talks about his "positive message on crime" and cites "five public safety endorsements," saying that law enforcement groups "like my ideas, about stopping gun violence and crime, the crime wave in the city, better than the lieutenant governor's."

At an "Italians for Ehrlich" rally in Baltimore's Little Italy that evening, about 50 people mingle, munching pizza, listening to Tony Bennett, and talking about the sniper. "She thinks it's a terrorist," says Baltimore resident Rosemary Medura pointing to her friend, who does not want her name used in print. "The Arabs, you know, al-Qaida."

Medura says even in Baltimore, she feels threatened by the sniper, but it hasn't affected her feelings about this race. "Me, personally, I'm for gun control," she says. "But I'm going to vote for [Ehrlich] anyway." Medura is a lifelong Republican who will once again pull the party lever this year, even though she and the Republican gubernatorial candidate have different views about gun control.

Medura is worried that the sniper is costing Ehrlich votes. "That's making him look very bad, the sniper thing, because he doesn't favor gun control. It will hurt him. I had a neighbor call me up and say she wouldn't vote for him because of the gun issue." But, she says, Ehrlich should not try to finesse his stand on gun control, as she thinks he has done since the attacks began. She inches closer to Kendel Ehrlich, who is here with her husband working the crowd. "I'm going to go tell his wife he's got to come out more talking about that gun thing."

Meanwhile, this hasn't been a good year for Kennedys in Maryland. Townsend's cousin, Mark Shriver, lost a Democratic congressional primary to Chris Van Hollen. And now, against the odds, she is in a fight for not only this race, but her political future. After a tough 1986 congressional loss, another big setback could prove fatal, especially in a state where Democrats hold a 2-to-1 registration advantage. The last time Maryland elected a Republican governor was when Spiro Agnew won in 1966. Ehrich is depending on crossover voters, especially in and around Baltimore, to overcome that advantage.

James Gimpel, a professor at the University of Maryland, says the sniper's ultimate impact on the Maryland governor's race is unclear. "I think it's going to mobilize some anti-gun people probably. But most of those folks will have decided well prior to this they're going to vote for her. Guns now may have moved closer to the top of issues in people's minds, but it also gets people thinking about crime and public safety, and not all those things work to her benefit."

"People say we're taking advantage of the sniper attacks for political gain," says Heilman. "The fact is, it is an issue, and it should be an issue. It's unfortunate and sad that it takes people dying for this to become a forefront issue."

But all sorts of theories abound about how the sniper could affect the race: The new focus on guns will help lift the struggling Kennedy campaign; if the sniper is still at large, it will suppress turnout because people will be too scared to vote. The more profound impact may be the lack of attention paid to the race, certainly by the media and perhaps by voters, as Election Day approaches. "Here we are in the last two weeks of a tough campaign, and the reporters are nowhere," says Townsend spokesman Len Foxwell. "Normally, this time of year, we'd be crawling with reporters, but now it's all sniper, all the time. It makes it difficult to get your message out."

Still, Democrats believe the tragic turn of events does seem to favor Townsend. "I think Ehrlich has overplayed his hand," says Democratic National Committee spokesman Bill Buck. "When you're talking about someone like Kathleen Kennedy Townsend, somebody whose family has experienced the realities of gun violence, it's hard to say she's taking advantage of this issue."