Mistress Victoria will slap you, whip you and intimidate you into shape -- or you'll have to lay a wet kiss on her derri 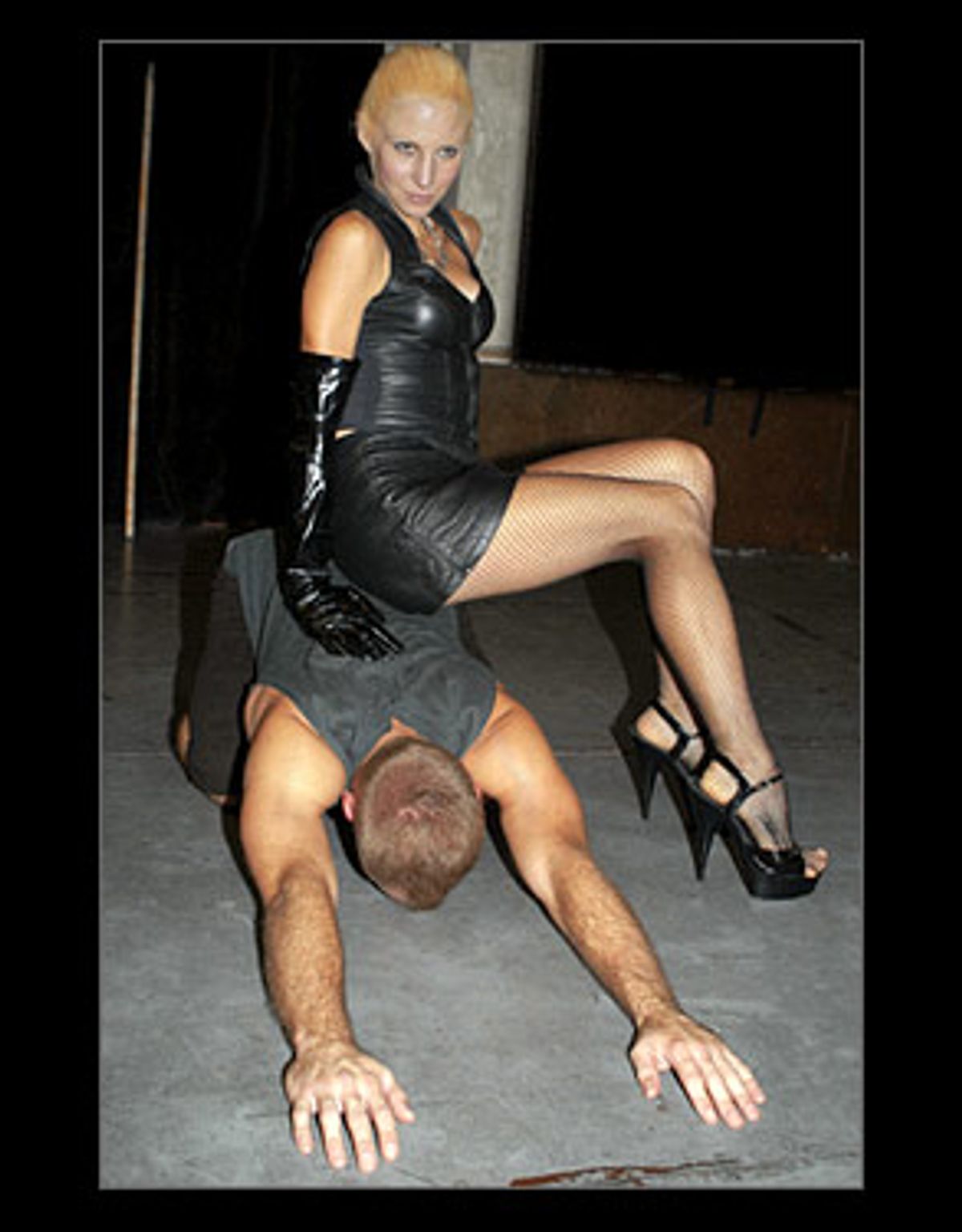 It's no secret that men and women sign up for gym memberships to get laid. But are people ready to head to the gym to be physically and verbally humiliated, beaten with a riding crop, and literally forced to kiss their fitness instructor's ass?

Plus-size men in leather panties aside, a sagging economy has also been a factor in the creation of this unique fitness regimen. "Slavercise lets me reach people for a lower fee," Victoria says. At just $20 for the hour-long group class, Slavercise allows its participants to take their lumps at a fraction of what it would cost to get slapped around by Victoria in her private dungeon.

Desperately out of shape and not entirely opposed to the idea of a sexy beating, I decided to swing by Slavercise's weekly session at Manhattan's Musical Theatre Works for a bit of the rough stuff.

As I waited in the hallway with my fellow Slavercisers for a martial arts class to empty out, it wasn't hard to guess who showed up to exercise and who showed up to do whatever a beautiful and petite blonde in a leather miniskirt, fishnet stockings and stiletto heels told them to.

Nick, a young copywriter from Manhattan wearing athletic shorts and a tank top, for example, could have easily passed for one of the guys I saw pounding the treadmills at Crunch down the block. Ed, a chunky lawyer from Queens wearing gray sweat pants and black leather work shoes, on the other hand, probably had a bit more than burning calories on his mind. In the brand-new running shoes and nylon pants I had recently bought while suffering from the delusion that I was going to take up jogging, I suppose I had a bit in common with both of them.

Mistress Victoria arrived at the class in pulled-back hair, a light blue jacket, black slacks and sporty slip-on sneakers. She could have easily passed for an off-duty Gap employee. That impression quickly faded when she stripped down to her skimpy black leather ensemble and began calling me a "pussy" a whole lot more than most retail salespeople I've encountered.

"You all look so pathetic," Victoria announced, signaling it was time for the fun to begin.

While the notion of combining a fitness class with S/M may seem horribly misguided at first, I was surprised how much sense it made once the class got underway. The effect is not unlike attending a boot camp run by an especially sexy drill sergeant.

"I'm gonna kick you in the 'nads," Mistress Victoria bellowed as I struggled my way through a short set of push-ups. I'm not sure whether it was my strong desire to get into shape or simply my fear of castration at work, but somehow her words inspired me to keep going. Were I not a gentleman, I might also point out that every time Mistress Victoria leaned forward to demonstrate a particular exercise, it was not entirely difficult to see right down her leather top.

Tight outfits, a sultry demeanor and a penchant for name-calling aren't the only things Victoria brings to the picture. As a licensed personal trainer and group fitness instructor, she has made Slavercise a solid workout. Squats, lunges, crunches, suicide sprints and stretching exercises all factor heavily into the routine. Being forced to plant wet kisses on her ass while doing sit-ups is what made it so different from my high school gym class.

"A whip-wielding woman in heels is a lot more intimidating than a typical aerobics teacher," Victoria says. "And even if it's just entertaining for people, if it brings them out to exercise, it's a good thing."

A woman with a whip can also get people to do pretty much whatever she wants. It is not uncommon for Slavercisers to be forced to oink like a pig on command or be made to wear a pig snout to enhance the effect. I also found out that if Mistress Victoria decides she wants to ride you like a horse while you're on the ground doing leg stretches, it's best to shut up and make like Seattle Slew.

Even an ill-tempered equestrian like Mistress Victoria knows about limits, though. Should either the push-ups or her repeated suggestion that I may indeed lack properly functioning genitalia prove too much to handle, I need only utter the word "mercy," and she is happy to stop the abuse. Saying things like "Stop, you're hurting me!" "Heart disease runs in my family!" or "I am not a mischievous pony!" however, will most likely just aggravate matters. When the fitness buff next to me let out a few groans during a particularly harrowing toe-touching exercise, Mistress Victoria reacted by shoving one of her pointy heels deep into his mouth.

"Suck it!" she demanded repeatedly as I began to ask myself whether I should have signed up for the introductory ballet class next door instead. I was afraid Mistress Victoria might coerce me into doing a little heel-sucking of my own, but in a rare act of benevolence, she simply walked over and smacked my ass a couple of times.

Mistress Victoria's softer side shone through again when she allowed one wiped-out student to take a break from the action and puke all over his sweat pants. Moments earlier she had forced him to don a pink ballerina tutu as punishment for finishing last in the suicide sprints.

In addition to helping people attain their fitness goals, Mistress Victoria is also quick to point out the romantic benefits of breaking a sweat.

"It's true what they say about pheromones, you know," she intimated to me after class. "I have a friend that rubs fresh crotch sweat on his face in order to attract women, and he gets laid constantly."

I thought about expressing my disbelief at Mistress Victoria's story. Then I remembered how this was the same woman who threatened to "kick me in the 'nads" an hour earlier, so instead I just told her that I'd be rubbing nut sweat on my cheeks as soon as I got the chance.

"This video is for the really fat losers who haven't worked out in a long time," Victoria clarifies with the kind of attitude you'd expect from a woman who works out in five-inch heels. "The classes are definitely more challenging than the video because there's no wimping out in class."

A "Slavercise: Beat the Fat" cookbook is also in the works. In addition to low-fat recipes, the book will feature quick workout tips, a guide to table service and etiquette, and -- I'm hoping -- at least a few clever rump-roast references.

But all this brand marketing doesn't mean Mistress Victoria has forgotten individual needs. Upon registration, Slavercisers are asked to specify their favorite fetishes as well as to decide how much physical and verbal punishment they'd like to see headed their way or whether they would prefer simply to delight in the misfortune of others.

"A foot fetishist is more likely to get in that extra push-up if he's kissing feet while doing so," Victoria explains.

Still, there's only so much you can do within the confines of a group fitness class. It's anyone's guess how Mistress Victoria might handle a Slavercise visit from one of her regular dungeon clients, a trailblazing gentleman with a thing for dressing up in full geisha attire and shoving hard-boiled eggs up his ass.

That, one can only assume, is another class altogether.

As I headed back out onto Lafayette Street after class, I was sweaty and sore. More than anything else, however, I felt invigorated. Sure, I was nearly brought to tears while trying to complete a few basic calisthenics. And sure, Mistress Victoria made me wear that pink tutu after I had made fun of that guy who puked on himself. But if it all means that I get to have a little fun while trying to whip my body back into shape, then I guess Im happy to be Mistress Victoria's little bitch for a while.

Dave Hill is a writer in New York. He is author of, most recently, "Tasteful Nudes:...and Other Misguided Attempts at Personal Growth and Validation."