This story takes place on the day of the "24" season premiere. Bong! 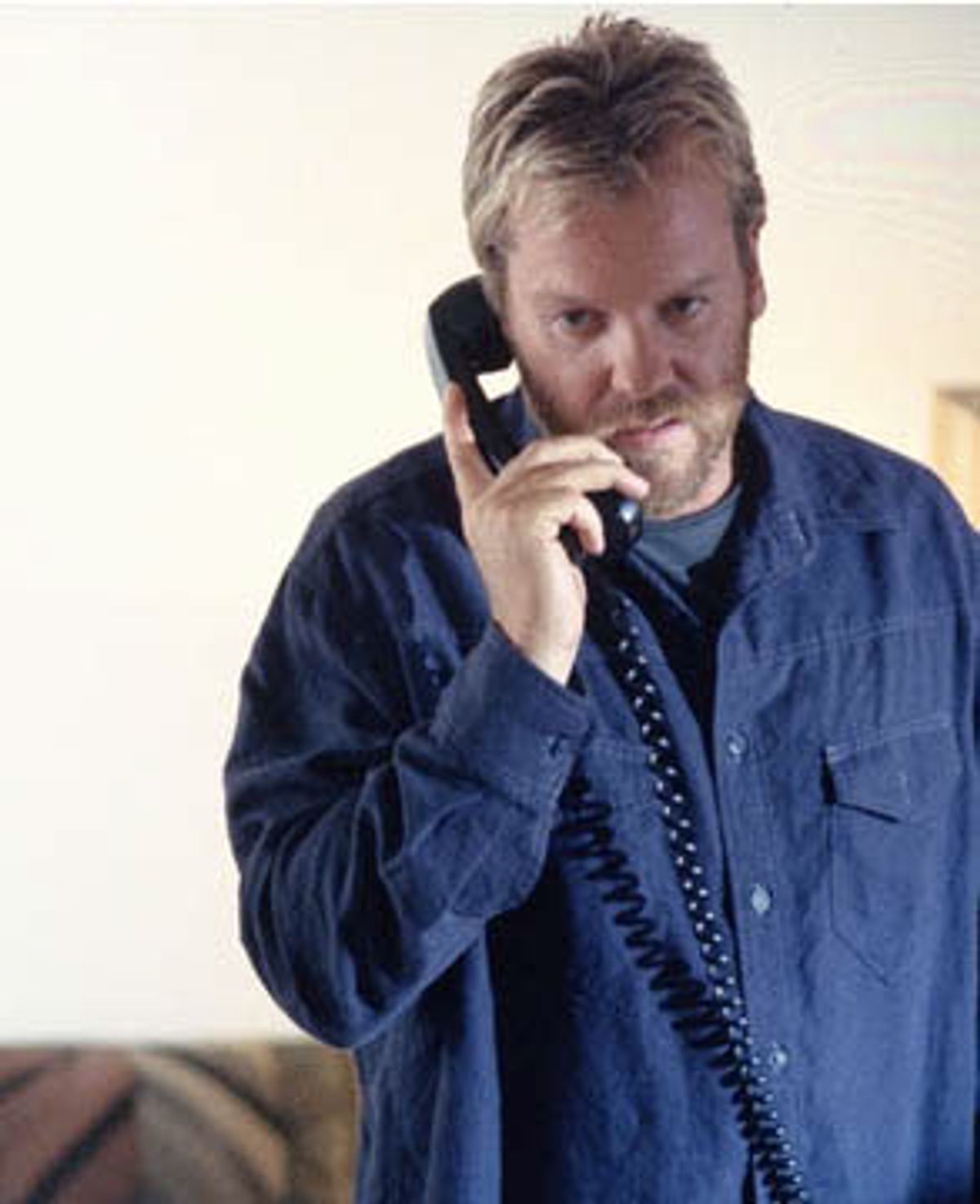 "24," Fox's quintessentially contemporary thriller, kicks off its second season Tuesday night and proves that once again, for today's superhero, there are literally not enough hours in the day to get through the to-do list.

For those who managed to miss both the series and the hype, "24" tracks the misadventures of federal agent Jack Bauer (Kiefer Sutherland), who when we last saw him was called upon to single-handedly avert an assassination attempt on the presidential front-runner, Sen. David Palmer (Dennis Haysbert), on the day of the California primary, as well as to save his own kidnapped daughter, Kim (Elisha Cuthbert), and his semi-estranged and pregnant wife, Teri, from the hands of murderous Serbs.

Over the course of what was billed as "the longest day of his life," and with no help from his traitorous chief of staff at the Counter Terrorism Unit in Los Angeles, Nina (Sarah Clarke), who turns out to be a Serbian mole named Yelena, Jack manages a respectable two out of three. Things are looking up until his wife is shot and dies in his arms, turning what would otherwise have been a triumph of time management into a somewhat hollow victory.

A lot has changed since we last encountered Jack. Sen. Palmer is now President Palmer. At the start of last season, Bauer looked like a vaguely hangdog surfer boy gone halfway to pot; now he looks like a guy who has spent many weeks communing with the couch. This time around, the situation is rather more apocalyptic. A Middle Eastern terrorism network has planned to spend the day detonating a nuclear bomb in Los Angeles. Palmer is called away from a fishing trip with his teenage son to deal with the situation. Right away, he wants to know: "How bad is the situation?"

Oh, it's dreadful -- beginning with a particularly gruesome torture scene in which a North Korean terrorist cronie is hooked up to some sort of operating table, and his feet are stuck in baggies filled with a sebaceous, yellowy fluid. It looks like a routine ankle liposuction gone horribly wrong.

As during last season, family tensions and job pressure rival big guns and warheads for their pure destructive capacity. Both Jack and Palmer must deal with the delicate emotions of their respective teenagers while saving Los Angeles from pulverization.

Trouble-prone Kim, who has been working as a live-in nanny since her mother's death -- which has made it hard for her to spend quality time with Jack without, you know, blaming him a little -- finds herself in the middle of a 52-megaton domestic situation of her own. Palmer's son is beginning to balk at his father's workaholism -- he knows he's the president and all, but still. And Palmer's scheming ex-wife, Sherry (Penny Johnson Jerald), is not out of the picture yet.

New characters include Sara Gilbert as Paula, an eager-beaver computer geek at CTU who may save Jack's hide more than once, and Sarah Wynter as Kate Warner, a lawyer with a brother-in-law problem. She discovers on the day of her sister's wedding that the groom-to-be may have terrorist ties. Kate must thwart her terrorist brother-in-law without really pissing her sister off.

This time around, some of the powers that be tried to talk the show's producers into losing the really-tough-day-at-the-office conceit in favor of a more traditional life-or-death situation of the week structure. As has been widely reported, the job of making "24" was a continuity nightmare. (Consider the difficulty of pulling off a 24-episode "day" spread out over six months of production.) The outfits the characters wore during the first hour were the outfits they wore through every chase, capture and narrow escape. Kim's party garb in particular -- she had donned a cutoff football shirt and sandals to go out with a pair of frat boys who turned out to be terrorist henchmen -- proved particularly challenging.

Luckily, co-creators and executive producers Joel Surnow and Robert Cochran's original concept prevailed. Improbably jampacked as Jack Bauer's to-do list was on that "day" last year -- it was such a hectic day that he never had time to go to the bathroom, for instance -- one narrow escape from apocalypse per week would have been even harder to buy.

Personally, I'm especially fond of the ticking clock that informs the viewer exactly how many hours, minutes and seconds remain before the bomb is set to go off and, by extension, how much time is left before the end of the series, the end of the episode and the next commercial break. There is nothing I hate more than being caught off-guard by an unexpected "show over."

One thing is certain, it's going to be another long day on "24." At least early indications suggest it won't be boring.