"Koyaanisqatsi" director Godfrey Reggio invented a film genre, prefiguring the campus classic "Baraka." There are no words in his latest -- just one cutting image after another. 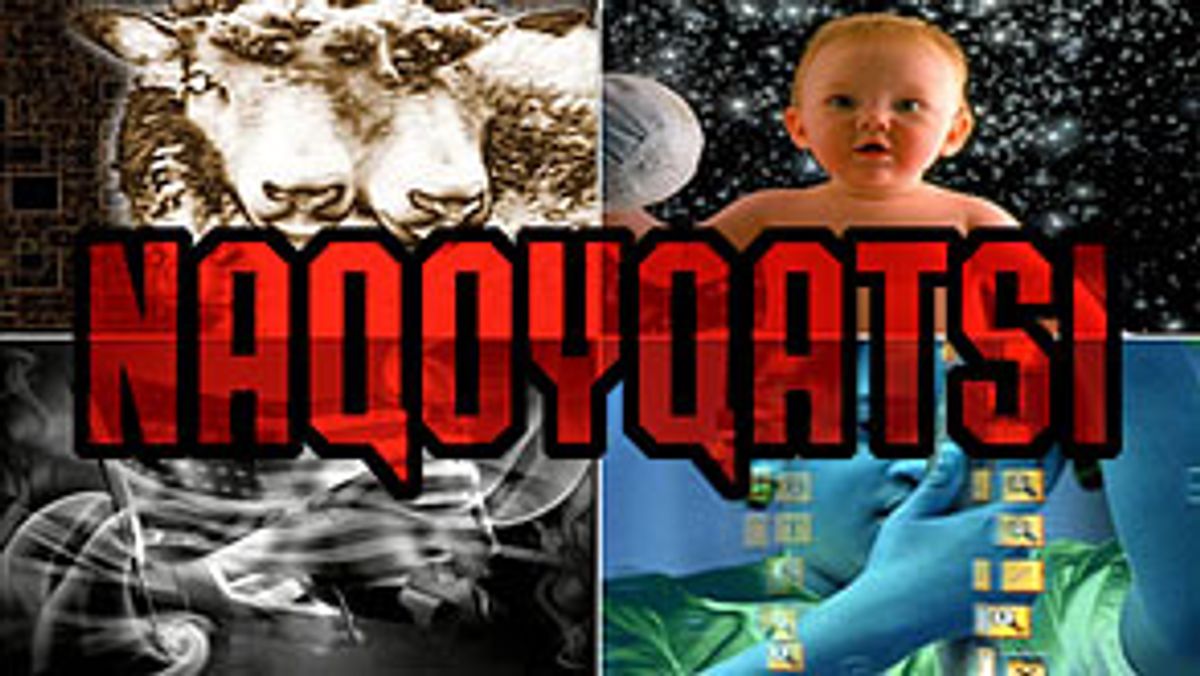 The camera focuses on an engraved brown rock surface -- a primitive relief that depicts human figures congregated around a monolithic object. This first image from the 1983 documentary film "Koyaanisqatsi" launched a trilogy that has taken director Godfrey Reggio more than 20 years to complete.

"Naqoyqatsi," the final film in his series of wordless movies, recently opened in New York and Los Angeles. It ends with a human figure floating through a computer-simulated background. As with the other films in the series, there is no narrative and no dialogue in "Naqoyqatsi" -- just a painstakingly edited assemblage of images set to the haunting and hypnotic original score of composer Philip Glass.

The juxtaposition of how "Koyaanisqatsi" begins and how "Naqoyqatsi" ends gets to the core message of Reggio's work. For him, nature and our self-created world (call it human nature) are so irreconcilable that we live our daily lives in a perpetual state of imbalance.

The trilogy, "Koyaanisqatsi" (1983), "Powaqqatsi" (1988) and "Naqoyqatsi" (2002), is an opus about life on this planet. Reggio spent his adolescent years sequestered in a monastery of the Christian Brothers order, and this film project has almost monastic clarity and discipline. It's a documentary project of mammoth proportions, one that Reggio hopes will have even broader sociological implications.

"Koyaanisqatsi" means "life out of balance" in the Hopi language. In shifting montages, the film places nature side by side with urban life -- desert landscapes and scenes from fast-paced metropolises. (It was shot and edited by Ron Fricke, who went on to create other documentaries of the genre, notably "Baraka" in 1992.) "Powaqqatsi," or "life in transformation," focuses predominantly on developing countries and the way nature's resources are pillaged to sustain human life. The latest film, "Naqoyqatsi," "life as war," suggests that our daily lives -- competition in the workplace, sports, our relationship to technology, a frantic consumer culture -- simulate, if not stimulate, war. It took Reggio over a decade to finance this swan song, but the timing could not have been more appropriate. War, after all, looms.

But how do you get people to see a feature film without words? Reggio's first film still has a loyal cult following. "'Koyaanisqatsi' was tremendously successful, especially in art houses and on college campuses -- probably one of the most successful films of the '80s," says film historian and Bard College professor Scott Macdonald. The films have played as far as Russia and South Africa in international festivals; the series is as universal as it gets -- there's no language barrier.

The films are, however, extremely unusual. In order to market the newest feature, the film's producers have turned to a homespun, anti-tech strategy. In New York and Los Angeles, raw, hand-photocopied fliers are being posted on the streets. One flier makes a list of goals for happiness, in effect, asking us if all there is to life is a flashy car and a well-paying job. Another looks distinctly like a band flier, but announces, "This is not a band, it's a movie." With this kind of low-key, viral marketing, a massive audience for "Naqoyqatsi" would be a miracle.

But the Qatsi trilogy has seen its share of miracles. Each of the three films might not have made it to the big screen if not for the support of three different well-known movie directors. Back in the early '80s, Reggio and his colleagues were in post-production on "Koyaanisqatsi" at the Goldwyn Studios in Hollywood. Director Francis Ford Coppola was at the studios as well. One day, he happened to catch sight of the film and requested a private screening. Coppola loved the film. "He said he would do anything he could to make this available to the public," recalls Reggio.

In 1988, George Lucas presented "Powaqqatsi" with Coppola. Neither one took production credits -- they merely lent their names to help cultivate a bigger audience. And more recently, in March 2000, director Steven Soderbergh came across an article in the New York Times that mentioned Reggio's ongoing dilemma in finding backing for "Naqoyqatsi." It wasn't long before Soderbergh approached the humble Louisiana-born documentary filmmaker and offered his support for the third act. This is the end of the trilogy, says Reggio: "For 27 years I've had this commitment to make these films. Now I'm free of that necessity."

"Naqoyqatsi" represents a noticeable departure from the style of the first two films. Eighty percent of the film is made up of stock footage -- commercials, newsreels, computer animations and such. That footage has in turn been fed into computers and digitally manipulated. A platoon of paratroopers, for example, jumps out of a transport plane over and over again. But in "Naqoyqatsi," for the most part, the enemy does not wield a gun. The enemy is technology itself -- and, in a bit of easy irony, the medium through which the documentary was made.

The dizzying visuals consist of numbers, words, genetic sequences, theorems and bar codes in motion, as well as moving collages of consumerist ephemera (commercials, products, logos). As these images carry the viewer through the film and into a state of queasy confusion, they make a not-so-subtle exaltation: Technology is not outside of us -- it's who we are. In the end, the means of conveying the message -- the fast-paced and disfiguring computer-tweaked visuals -- is the message. In other words, social commentaries on technology can only be properly explained through that very technology.

If the focal point seems abstract that's because it is. Reggio has undertaken a colossal task in both his subject matter and its unorthodox presentation. The theme of technology is present in all the films but is portrayed on slightly different levels. In "Koyaanisqatsi," the inner workings of a metropolis -- seen in one case through aerial footage of a freeway in fast motion -- set up the analogy that urban life is really nothing more than a giant set of circuits. The potent opening scene for "Powaqqatsi" shows, in slow motion, a community of people in the developing world laboring through mud and earth. This introduction highlights the brilliantly machinelike discipline, force and organization that go into carving out a society.

"Naqoyqatsi," especially through images of Dolly the cloned sheep and dancing DNA formulas, reminds us that our complex genetic makeup resembles the circuitry inside the computers that dominate our daily lives.

To get the full impact of what Reggio is trying to say, you're best off starting with his first work, "Koyaanisqatsi," and progressing, in order, through the films. Each work, as it proceeds to another stratum, furthers the agenda of the trilogy as a whole. On its own, "Naqoyqatsi" may fail to deliver its message. Tech-savvy viewers are, after all, used to seeing thousands of logos, commercials, computer icons, newsreels and digital images a day. It could be difficult for viewers to step back from the film with enough clarity to both experience and understand the message.

In the end, the barrage of visual information may have little impact on the image-saturated minds of those who view it. But anyone who watches the trilogy as a whole is likely to be moved not only by the cinematography and monumental score, but by his or her own ability to watch a movie in a completely different way. Instead of following the plot step by step, viewers of the Qatsi trilogy must learn to sit back and take in a viewing experience that does not follow conventional Hollywood formula. The films take place in the realm of the timeless.

In this realm, words get in the way. "Our language can't even begin to express what's happening [in our world]," says Reggio. That's another way of saying that the written word has been supplanted by images. In the book "The Alphabet versus the Goddess," author Leonard Shlain calls this shift the "iconic revolution." He theorizes that the rise of literacy reconfigured our brains to function in the realm of the left hemisphere (a lobe that favors scientific analysis, reasoning, dualism, law and order and misogyny). Television, films and advertising, he argues, are reshaping how we process ideas, in favor of right-brain traits -- aesthetic appreciation, universality, nurturing and equality.

According to Shlain, Reggio's work is a prime example of that shift: "In listening to music and looking at graphics -- primarily right-hemisphere experiences -- it creates a different kind of unity experience." Language, according to Shlain, detracts from this. "Whether you're watching a regular film, an art film or a foreign film," says the author, "there's no way of getting away from language and the activation of your left hemisphere."

Shlain sees this proliferation of images over words as a uniquely positive occurrence, while Reggio understands it differently. In "Naqoyqatsi," images of all kinds overload the viewer to the extent that he or she is left wondering what is real and what is reel, so to speak. We are asked to ponder this question every day when we sit down in front of our TVs, especially when we watch the increasingly artificial devices of news coverage.

By appropriating familiar media images, Reggio almost demands an answer. Confronting viewers with military training videos, battle footage and news clips of killers -- the director makes us consider how real these real-life events actually feel. In another sequence, a smiling woman bites into a hamburger in slow motion (the clip was obviously taken from a fast-food commercial). The director's message about our present media existence appears dark, almost apocalyptic. He seems to view the cult of image as responsible for distorting our values. "In that sense we can talk about the Los Angelization of the planet," he says somberly.

Reggio's Qatsi series challenges viewers to escape from L.A. He asks us to change the world. At the same time, he arms us with bountiful images of our landscapes -- the potential for so much unspoiled beauty. Speaking of "Koyaanisqatsi" and "Powaqqatsi," film historian Macdonald raves: "Both films give us a sense of the world, in all its immensity." But the trilogy's most recent incarnation, "Naqoyqatsi," ends on a zero point. A computer-generated image of man bobs around a boundless universe. It seems that this zero point is upon us now.

Historically speaking, the art produced during turns of centuries is often chaotic, stark or somewhat fear-based. Edvard Munch's "The Scream" and Pablo Picasso's blue period ushered in the 20th century. What immediately followed, the colorful and optimistic Fauves, is a sanguine historical indicator of what could await us. The point of "Naqoyqatsi," for example, is not to follow the Schwarzenegger formula for inducing a fear-based rush or to eroticize violence. The message seems to be that we had the capacity to create this society and we have the capacity to change it.

Reggio's advice: "Live your own creative life. Don't make your college diploma a death certificate because it conjoins you to the great myth of making money, and the pursuit of technological happiness through 'commodotization.'" He admits that the films are about tragedy, to a certain extent, but believes that the journey they invite us to take is a cathartic one. "The purpose of tragedy is not to depress; it's to purge, to rebel against our destiny."