It's the war, stupid

Yes, the Democrats have serious problems. But without 9/11, they still would have trounced Bush and the Republicans. 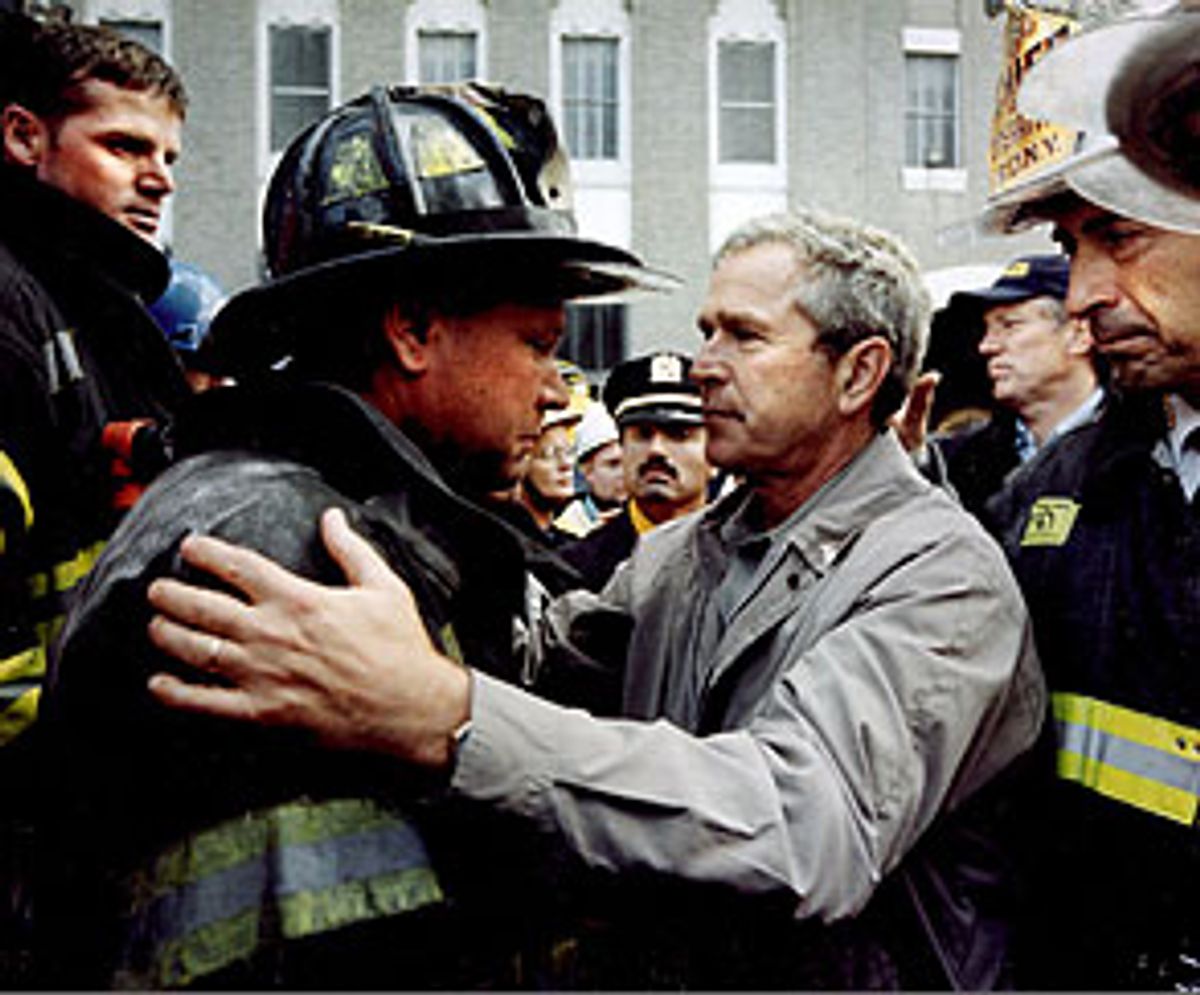 In the days and weeks ahead, as the Democrats try to make sense of the Bush-GOP train that just ran over them, there will be an orgy of soul-searching unmatched since Mao ordered Capitalist Roaders to engage in "constructive self-criticism." The worst Democratic Election Day debacle since at least 1994 is certain to inspire a torrent of accusations, recriminations and proposals. Some will say the Democrats lost because they no longer stand for anything. Others will blame their lackluster candidates and poor party leadership. Others will whack the Democrats for failing to get their message out. Still others will complain that the Democrats simply lack the GOP's killer instinct. And so on.

All of those criticisms are valid. The party is intellectually moribund and "triangulated" to death; its leaders are timid, mealy-mouthed nonentities. It's a mess that needs a thorough house-cleaning. But before Democratic voters jump off a cliff en masse or decide to register as Whigs, they need to take a deep breath and repeat this mantra:

It's the war, stupid.

Without the 9/11 terrorist attacks, President Bush and the GOP -- presiding over a terrible economy, embracing far-right positions that put them out of step with most Americans -- would be toast right now. Tuesday's results were an anomaly, a classic case of the nation rallying around the president during wartime. Bush's popularity remains high, and his hard-driving campaigning in the election's last weeks appears to have tipped the scales. But take away his commander in chief's mantle, and Emperor Bush has no clothes.

Bush entered office having lost the popular vote in the most dubious election in American history, and he has exactly zero achievements to point to since then outside of pushing the "annihilate the Taliban" button, an action that hardly required the wartime leadership qualities of a Churchill. His massive tax cut brought joy to the hearts of anti-government zealots like Grover Norquist, but it did virtually nothing to help ordinary Americans and it will hamstring the economy for years to come. His heavy-handed unilateralism and moralistic hectoring has squandered the global goodwill Americans enjoyed after the terror attacks and has taken relations with key European allies like Germany and France to postwar lows. His obsession with Iraq and reactionary Middle East policies threaten to kick that hornet's nest open, with unforeseeable consequences. On issues from the environment to abortion rights to medical marijuana to corporate accountability, he has staked out positions well to the right of most Americans.

Under normal circumstances, and especially for a midterm election, this would not be a winning hand, no matter how lame your opposition. But on Tuesday, the desire of Americans to support a wartime president trumped everything else. "Don't you know there's a war going on, mister?" pretty much summed up the GOP's pitch. And even if the Democrats had come up with a better message or better candidates, that message probably would have prevailed.

Many Democrats, particularly those from the left wing of the party, blame their defeat on their party's failure to oppose two things: Bush's tax cut and his proposed war on Iraq. The two issues are completely different, however. As to the tax cut, the truth is that had the Democrats opposed it, they probably would have been defeated even more soundly than they were -- although I believe they should have done so anyway, sacrificing short-term pain for long-term gain. Tax cuts are kryptonite to the Democratic Party because they are popular with voters, and Republicans know this. But sooner or later, voters are going to realize that virtually all the benefits of the GOP tax cuts are going to a tiny handful of plutocrats and giant corporations -- and when that happens, it would be helpful if the Democrats have staked out a position distinguishing them from Republicans. In the short term, however, opposing the tax cut would not have helped stop the GOP and indeed would likely have made the rout worse.

The Iraq war is a different story. A principled Democratic resistance to Bush's plans to invade Iraq would probably not have affected the outcome of the midterm election. Osama simply gave Bush and the GOP too much of an advantage: The fear and confusion sown by the terror attacks made it difficult for most Americans to distinguish between different threats from the Arab world and led them to rally around the president. But the Democrats should have fought back anyway, for a variety of reasons. Opposing the Iraq resolution would not have hurt the Democrats nearly as much as they feared, and perhaps not at all. It would have weakened Bush by raising doubts about his leadership of the "war on terror" -- the one area where voters trust him -- and about whether that peculiar "war" actually exists. Above all, it would have broken through the congealed, "patriotic" bipartisanship that the Democrats have spinelessly engaged in since 9/11 -- a supine posture that has allowed Bush and the GOP to completely set the agenda and limit the terms of national debate. By buying uncritically in to the war on terror as defined by Bush, the Democrats implicitly accepted that the commander in chief was the gold standard of patriotism, wisdom, judgment and all the other virtues that wartime leaders must be believed to embody. Once they did that, trying to criticize him was like swimming against the current.

The Democrats should have pointed out that America is not, in fact, at war -- at least not in the conventional meaning of the word. American troops are no longer engaged in regular combat, and American civilians have not been asked to make any sacrifices. After a brief initial war phase, the "war on terror" has imperceptibly and properly shifted into something more like an international police action, albeit one punctuated by ominous assassinations like the "Star Wars" robot-plane hit in Yemen. The Democrats should have made this clear and tried to lower the emotional tenor of the discussion about the most appropriate response to terrorism. After all, "Don't you know there's an international police action going on, mister?" isn't exactly the stuff to rally the troops.

The Democrats' complete failure to do this, or to engage Bush on any of the issues that came up after the 9/11 terror attacks, from the USA PATRIOT Act to Bush's green light to Ariel Sharon, cleared the way for Bush to make major political hay by demonizing Saddam. Bush's saber rattling about Iraq achieved two things at once: It helped restore a vague, politically useful sense of wartime paranoia and unease to the country, and it restored his image as a resolute war leader.

The fact is that once the Democrats rolled over, the Saddam-bogeyman card was a sure winner for Bush -- a fact surely not lost on his political strategists. Bush obviously won the votes of those who accepted his argument that Saddam posed an immediate and unacceptable threat. But, paradoxically, he also probably won over many of those who were confused and uncertain about whether invading Iraq was worth the risk. Bush's elevation of Saddam to the status of supreme world villain, and his irresponsible but politically clever assertion that Saddam and al-Qaida were linked, succeeded even in the minds of many doubters in turning Iraq into a kind of ominous miasma, indistinguishable from Osama's boys. The bottom line, in many minds, was simple: America is threatened by an out-of-focus mob of medieval ragheads, and we need the firm, even heavy, hand of a Republican to take care of them. The Republican qualities that many middle-of-the-road voters might find objectionable -- ruthlessness, impatience with niggling moral objections, selfishness -- look more attractive when a blurry horde of demented Arabs waving scimitars is riding in out of the desert.

Had the Democrats raised doubts about Bush's Iraq plans, more of these voters would have grasped that if Bush was wrong about the imminent threat posed by a secular dictator we lovingly embraced a few years ago, then he himself would be to blame if an invasion backfired. Democrats should have pointed out that an invasion of Iraq could have consequences more profound -- perhaps good, perhaps catastrophic -- than any U.S. military action since World War II. They should have pointed out that those consequences remain unforeseeable -- and that when consequences cannot be predicted with any degree of accuracy, when possible negative consequences could be catastrophic, and no compelling evidence exists of an imminent threat, prudence dictates nonintervention. That's why before 9/11, almost no one outside the small cabal of neoconservative zealots who are now driving America's Mideast policy seriously advocated a full-blown invasion of Iraq.

Yet the Democrats, implicitly accepting Bush's emotional but irrational claim that the 9/11 attacks changed the frame of reference not just for the Iraq issue but for everything, refused to debate the subject. The fact is, until the Democrats dare to challenge the Republican ownership of 9/11, Bush will keep playing the "We're at war" card -- and the Democrats will continue to face an uphill struggle.

Challenging Bush and Co.'s ownership of 9/11 doesn't mean turning quisling or becoming an "appeaser," to use a word promiscuously thrown around by blowhards on the right. It means quite the opposite: bringing a cold and dispassionate eye to the discussion of how best to defeat al-Qaida. Whether the struggle we're engaged in is called war, a police action or whatever, it will be most effectively prosecuted by cool heads. It's high time the Democrats get over their perennial fear of being attacked as unpatriotic -- the Republicans are going to smear them with that anyway, as Sen. Max Cleland of Georgia found out -- and got down to taking care of the nation's business.

The Democrats probably had no chance this time -- yet another reason to hate Osama and his hellish minions -- but they have ample time to get their act together. For Bush, looking ahead to 2004, Osama could be the gift that keeps on giving, politically speaking. If he can figure out a way to keep the public in a state of low-grade war fever for two more years, the GOP will continue to hold the political heights. It is one of the many tasks the Democrats face, as they pick up the pieces, to prevent him from doing that.