What became of you, O alterna-hipster movie goddess of the bygone slacker era? A Winona boy laments his fallen idol. 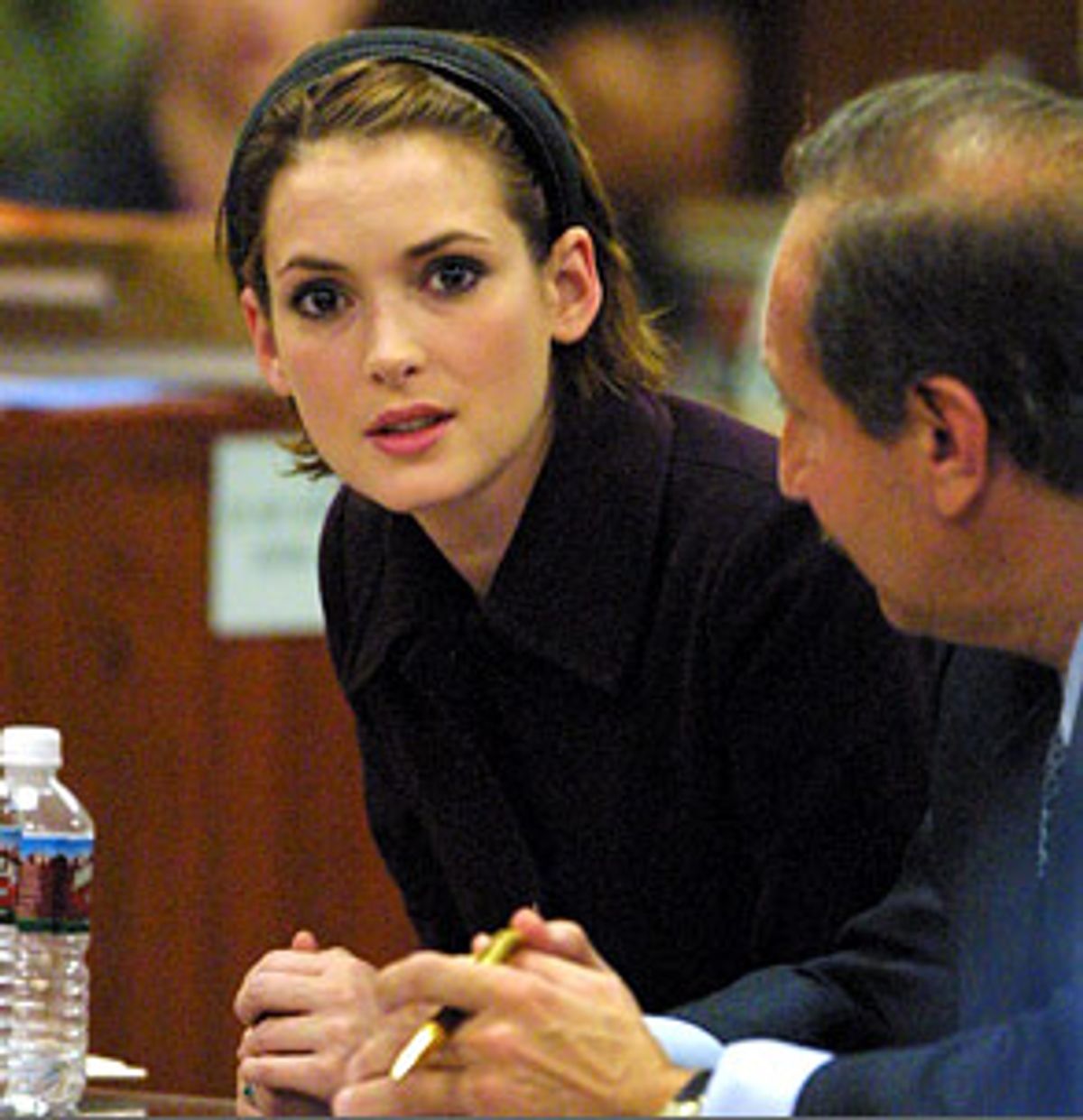 I could hardly even recognize the Winona Ryder who arrived at the Beverly Hills courtroom on Monday, two days before a jury of not-quite-her-peers found her guilty of grand theft and vandalism. Who was that overly made-up hussy, dressed to the nines in her beige outfit and matching accessories? That wasn't the Winona I fell in love with, the ghost-befriending clad-in-black proto-goth of "Beetlejuice"; the loner outcast high school girl and mass murderer of "Heathers."

These are sad days for a Winona boy. Not that there haven't been a lot of sad days for us already. Some might even argue that the trail of tears started as far back as 1994's "Reality Bites," and that the sorry sight of Winona shoplifting at Saks is just the last mote of tragedy confirming, once and for all, that those halcyon days of the late '80s, when we were all slackers searching for our Winona, are gone forever.

Remember slackers? Today, we call them unemployed dot-commers and sneer at them, but back in the late '80s and early '90s, slackers were cool. OK, OK. Maybe they weren't cool. Maybe they were pathetic. But they could dream they were cool, couldn't they? And part of that dream included Winona. Because who needed a job, or a life, if you had a cute girlfriend with style?

Winona was the girl with the great musical taste and the wry putdown, the one that made you feel that you were cool just because you had her attention. Neither blonde nor bombshell, she was also a girlfriend who could be aspired to. She wasn't looking for hunks or he-men -- she could see through all that stuff to the real you, that incredibly desirable guy who wasn't really a loser, no sir, but was in fact an artist who needed only the love of a girl like Winona before blossoming into true creativity. She was the one that understood that your cross-references between the gender dynamics of "Three's Company" and "WKRP in Cincinnati" were, like, brilliant. Her cracked smile, at once winsome and whacked, was a benediction.

Why, Winona, why? Why did it have to be shoplifting at Saks? This is worse than Noelle Bush getting busted for forging a prescription for Xanax. This is worse than Janeane Garofalo going on a diet. This is true betrayal, because there's no way that anyone who shoplifts at Saks ever really had the time of day for the denizens of Slackerville. The Gap, maybe, but not Saks. Her sin reminds me the heartbreak I felt when Dave Pirner of Soul Asylum dumped his girlfriend for her. Sure, Pirner was the real asshole, but Winona did not escape the general taint of yuckiness. The Winona I loved had more character than that.

The Winona I loved was an accessory to the murder of people who dressed in Saks knockoffs, for crying out loud! The Winona I loved dressed in a black that hinted of Baudelaire and Sartre, not of a grieving widow trying to gain sympathy in a courtroom. The Winona I loved may have made some bad choices -- c'mon girl, I could have told you Johnny Depp wouldn't be good for you, if you had bothered to ask -- but who doesn't stray from the path of common sense every once in a while?

Winona, Winona, Winona. Did we, the crush-besotted knights of slackerdom, do this to you? You're only 31, after all. You were only 17 in "Beetlejuice"; 18 in "Heathers." Perhaps your slender frame could not bear the weight of a generation's hormonal anxieties. Maybe it's our fault. In our rush to anoint you Queen Alternababe, we forced you to wear a tiara too heavy.

It's not too late to make it better. We're slackers, after all -- we're accustomed to being blamed and despised. We can take the heat for your indiscretions. All you have to do is come back to us, come back to our couch and our reruns and our grunge. Put on some sweatpants and forget the matching accessories and the celebrity boyfriends. We'll still love you.