The opposition party not only failed to articulate a good case against war -- it ducked the hard question of what to do about a dangerous dictator. 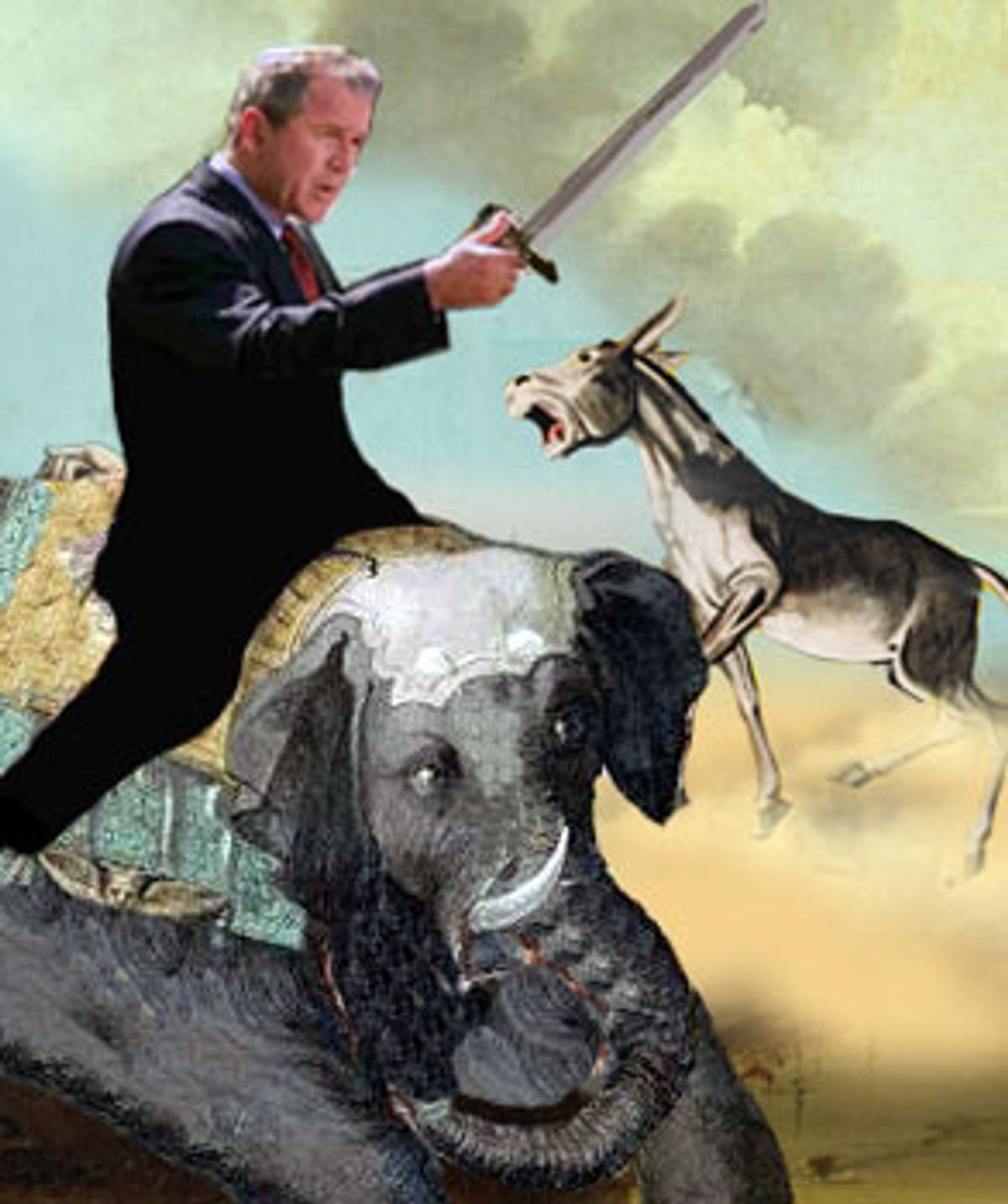 The Democrats lost so big this week, an emerging consensus has it, not because their message was rejected but because they didn't have much of a message at all. The president's persistence in making the case for war against Iraq gave Republicans something to vote for, the argument goes; Democrats weren't quite sure what their leaders thought. Perhaps if they'd played the part of the loyal opposition and made a forceful case against the president's policy, the election might have gone better for them.

The problem with this argument is that it ignores the much more straightforward possibility that the Democrats were simply wrong on Iraq -- both in the policy they supported and the way they arrived at it. After all, if voters were really dead-set on sending a message of opposition to the war, was it really so hard to know which party to vote for?

The Democrats' first problem on Iraq was not so much their policy itself as the way they approached the debate. From the get-go, Democrats approached Iraq less as a matter of foreign policy than one of domestic politics -- they sought to get through the issue with as little political damage as possible and get back to domestic policy questions, where their political bread was really buttered. That meant dealing with the Iraq question tactically, rather than substantively -- as a matter of politics rather than foreign policy. Because of that, over time their message became not whatever particular angle they were pursuing on this or that given day, but their own fundamental unseriousness about national security policy. That impression in itself proved deeply damaging.

On substance, moreover, it's really not clear that congressional Democrats ever seriously confronted the Iraq question. The truth is that Iraq is a very grave danger to the security of the United States -- not in the wing-nut sense of Saddam Hussein setting off nuclear warheads in American cities or dousing us with anthrax the first chance he gets, but a very serious danger nonetheless. Like it or not, the United States is the guarantor of the peace, security and free flow of oil out of the Persian Gulf, the jugular vein of the world economy. For 30 years Saddam has demonstrated a desire to dominate the region. And he's launched a series of reckless and destructive wars -- most notably against Iran and Kuwait -- to secure those ends.

So long as Saddam remains on the other side of the nuclear threshold, we can keep him in check with occasional bursts of cruise missiles or whack him back into line with our massive conventional forces if he ever really gets out of line. But once he acquires nuclear weapons he becomes almost infinitely more difficult to control. Rather than our nukes deterring him, Saddam is likely to think -- and not without good reason -- that his nukes will provide deterrence against us and an umbrella under which he can go back to his old ways.

If Saddam starts muscling Kuwait or Jordan or Saudi Arabia, we'll be very hard-pressed to deal with the situation. It's easy enough to say that we'll nuke him if he nukes the Kuwaitis. But if he calls our bluff, are we going to nuke Baghdad? Do we really want to face that choice? Deterrence really only works -- or works well -- if you're dealing with an essentially conservative, rationally acting regime. But, as Kenneth Pollack notes in his recent book, "The Threatening Storm," that hasn't really been our experience with Saddam.

In any case, the question of whether we can let Saddam get nukes has already been hashed out. The first Bush administration and then the Clinton administration both pursued a policy that assumed the security of the United States was not compatible with Saddam's acquiring a serious weapons-of-mass-destruction capacity -- particularly nuclear weapons. As long as weapons inspectors roamed the country with some relative freedom and sanctions kept the Iraqi economy on its knees, the matter was more or less in check. But inspectors got kicked out, economic sanctions frayed to the point of nonexistence, and the geopolitical costs of our keeping those sanctions in place grew rapidly. For the last several years, Saddam may have been "in the box," but we've been in there with him. And he's been having a better time of it than we have.

The simple fact is that American foreign policy has for more than a decade been based on our unwillingness to allow Saddam to acquire the bomb. The policies we'd been using to hold him in check have broken down. And we're thus faced with a simple decision: accept what we'd been unwilling to accept -- a nuclear-armed Saddam; find some way to get Saddam back in check; or settle our beef with him once and for all, as the White House proposes. For all the administration's swaggering indifference to international institutions and simplistic readings of the dynamics of Middle Eastern politics, this is a basic fact that the administration confronted squarely and the Democrats did not.

The Democrats had excuses aplenty -- many of them valid. The Democrats wanted the president to make the case for the necessity of war. Fair enough. But it was never clear why the president had to "make his case" before the Democrats could figure out what their own Iraq policy should be. Other Democrats argued that, as important as Iraq might be, our first priority is al-Qaida, and going after Iraq now might hobble our more pressing struggle against terrorism. Again, good argument. But it would be a lot more convincing if these same Democrats had been pushing to resolve the Iraq question before Sept. 11. And of course most of them weren't. That fact makes this argument sound like what, for most of them, it was: an excuse.

It's certainly not that the president's policies weren't without their fooleries and missteps. The president started down this course by confronting not only Iraq but needlessly doing the same with most of our allies and international institutions we ourselves had created. Administration policymakers painfully misjudged the relationship between Iraq and the bloodletting on the West Bank. They needlessly mixed up the case on Iraq with a much broader and more iffy doctrine of "preemption." And Dick Cheney and other administration hawks thought a good talking-to would be all that was needed to get the moderate Arab states on board. Over the course of the last year the administration has stumbled from one permutation of its policy to the next, finally settling on a plan to work through the U.N., a policy it had earlier rejected.

If the Democrats had their own coherent policy on Iraq they might have been able to make political hay out of the administration's record of missteps and course corrections. But since the Democrats really had no policy to speak of, the fact that the president was at least confronting the problem squarely made him the winner in the debate.