How the Confederate flag flap helped the GOP

Democratic governors in South Carolina and Georgia lost at least partly because of their courageous stands against a divisive symbol of racism. 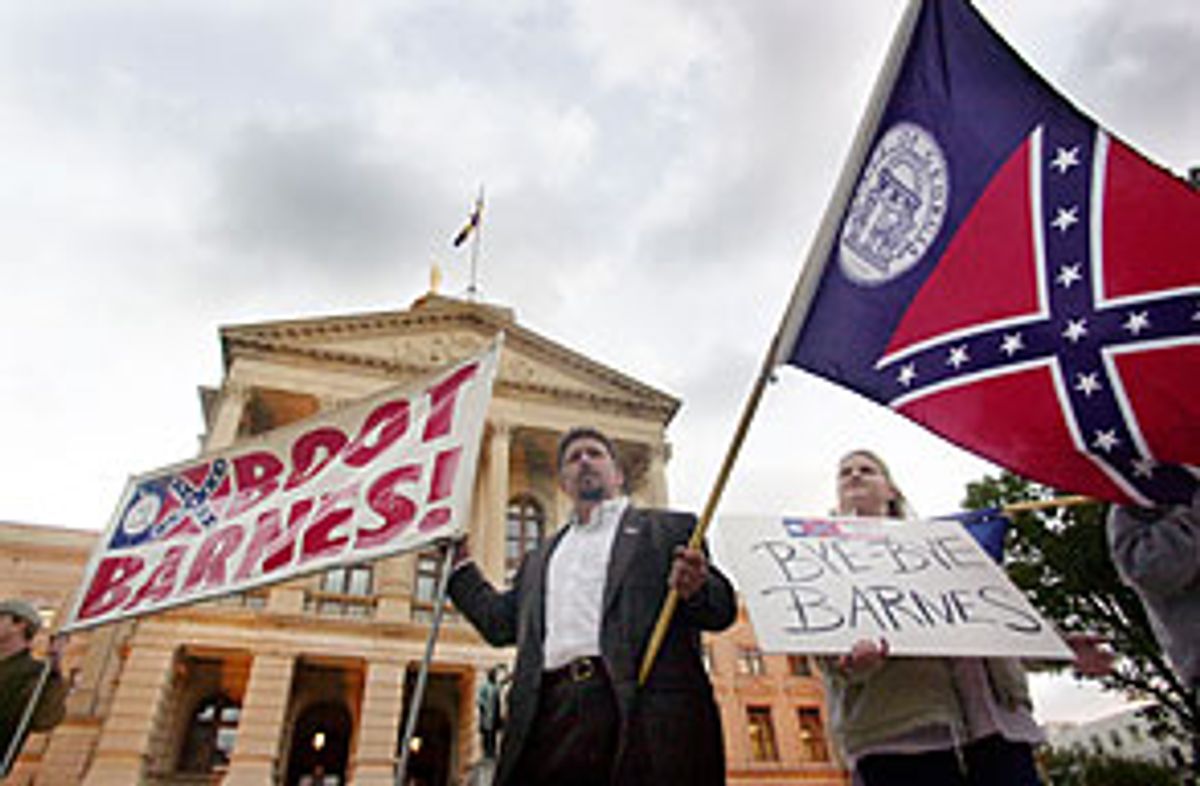 The Republicans' historic victories in last week's midterm elections owed a great deal to a surge in white voter turnout in the rural South, notably in South Carolina and Georgia, where incumbent Democratic governors, as well as U.S. Senate candidates, went down to crushing and surprising defeats. One factor largely ignored by the media was the way the ongoing controversy over the official display of divisive Confederate emblems also helped to galvanize angry white voters. So while Democrats debate whether their stance on Iraq hurt them last week, Republicans ought to worry about whether their debt to pro-Confederate flag voters might have gained them victory now at the cost of future races.

In 2000, South Carolina's Democratic Gov. Jim Hodges approved the removal of the Confederate battle flag from atop the Statehouse dome and its relocation to a less conspicuous location on the capitol grounds. A year later, Georgia Gov. Roy Barnes forcefully won legislation that redesigned the state flag, vastly reducing the battle flag's presence. Those relatively cautious compromises -- neither man banished the flag entirely -- marked the culmination of campaigns led by the National Association for the Advancement of Colored People and various corporate, church and tourism groups, for whom the old symbol had become both offensive and embarrassing. Hodges and Barnes presented the changes as sincere efforts at racial reconciliation, to help, Hodges said, "the descendants of slaves and the descendants of Confederate soldiers join together in the spirit of mutual respect."

As everyone understood, but rarely said outright, the conflict involved history far more recent than the Civil War. Georgia officials had placed the Confederate emblem on the state's flag in 1956, as part of their massive resistance to desegregation. South Carolina followed suit in 1962 by hoisting the battle flag to its place of sovereignty over the capitol. Hodges' and Barnes' decisions to remove those insignias involved not the breaking of ancient custom but a symbolic resolution of the bitter contests in what historians have called the Second Reconstruction of the 1950s and 1960s.

But some white recalcitrants saw the compromise as a threat and a disgrace. The nation caught a glimpse of their horrified reactions when they intruded upon the 2000 South Carolina Republican presidential primary. Pressed about where they stood on the impending lowering of the Confederate flag, both George W. Bush and John McCain refused to criticize those forces, led by the Sons of Confederate Veterans (SCV), that were resisting the change. (Sen. McCain has since expressed regret over his position.)

While the rest of the nation moved on to other concerns, the flag issue continued to agitate voters in South Carolina and Georgia and elsewhere in the South. SCV activists in Georgia mounted what they called "Project Wave," erecting 24-foot flagpoles flying the old emblem all over the state, and hounding Barnes whenever he made public appearances. A South Carolina neo-Confederate group, the League of the South, urged voters to topple the man they began calling "the Turncoat Hodges." Smaller controversies over Confederate displays broke out and seeped into politics from Virginia to Mississippi.

Republican politicians then exploited the issue, with all its blatant racial overtones. The Georgia GOP gubernatorial candidate Sonny Perdue, backed by Georgia Republican state chairman and former Christian Coalition head Ralph Reed, upheld the honor of those who died defending slavery, and pledged that, if elected, he would push for a statewide referendum to restore the old flag, nearly two-thirds of it taken up by the Confederate emblem. In South Carolina, GOP hopeful Mark Sanford accused Hodges of lying to the voters about the lowering of the Statehouse flag. The tactic worked like a charm, especially in Georgia where the Democrat Barnes had been expected to win reelection handily. The election returns clearly show that rural white voters switched in droves to vote Republican, and that the flag controversy was one important reason why.

"That flag issue had some life; it clearly did have an impact," said University of Georgia political science professor Charles Bullock. The chairman of the Georgia Grassroots Republican Action Committee, Anthony Scott Hobbs, agreed, noting, "I think there was a backlash."

Many other issues certainly helped decide these elections, ranging from proposed school reforms in Georgia to alleged malfeasance of state agency officials in South Carolina. Last-minute campaign appearances by President Bush helped mobilize the rank and file. His immense popularity in the South, thanks to his handling of the war on terror, gave Republican candidates an enormous boost. But neo-Confederate activists also remembered Bush's stance on the flag flap in 2000, which many interpreted as a quiet endorsement of their efforts. At least they know he never publicly regretted his position, unlike McCain. As ever, in politics, substance and symbolism proved impossible to disentangle.

They remained entangled on election night, when a victorious Sonny Perdue, appearing against a backdrop of Confederate emblems, jubilantly exclaimed, with dubious taste, a line from an old black spiritual made famous by another Georgian, Dr. Martin Luther King Jr.: "Free at last! Free at last! Thank God Almighty, free at last!" Since then, Gov.-elect Perdue has backed off from his pledge to restore the old flag, and said with a straight face that the issue was only a "small" reason for his victory. And so his campaign appeals seem to have been just a cynical ploy, in a long tradition of Southern racial demogogy.

In William Faulkner's play "Requiem for a Nun," a character remarks mordantly: "The past is not dead. In fact, it's not even past." And so in American politics -- and not just in the South -- the past is the present and perhaps the future too. Old scars continually reopen as fresh wounds. The ghosts of the 1860s and the 1960s get conjured up anew on the political stump. Efforts at racial reconciliation remain blocked by political pandering to old fears, divisions and prejudices.

It is a sobering thought to consider, especially for Republicans of goodwill. Once they recover from their celebrating, they might want to take stock of everything that helped lead them to great victory in the last election, and ask themselves how much of it truly makes them proud.