The trouble with Harry

Despite terrific special effects and funnier gags, "Harry Potter and the Chamber of Secrets" finds a way to make J.K. Rowling's marvelous series into a deadly bore. 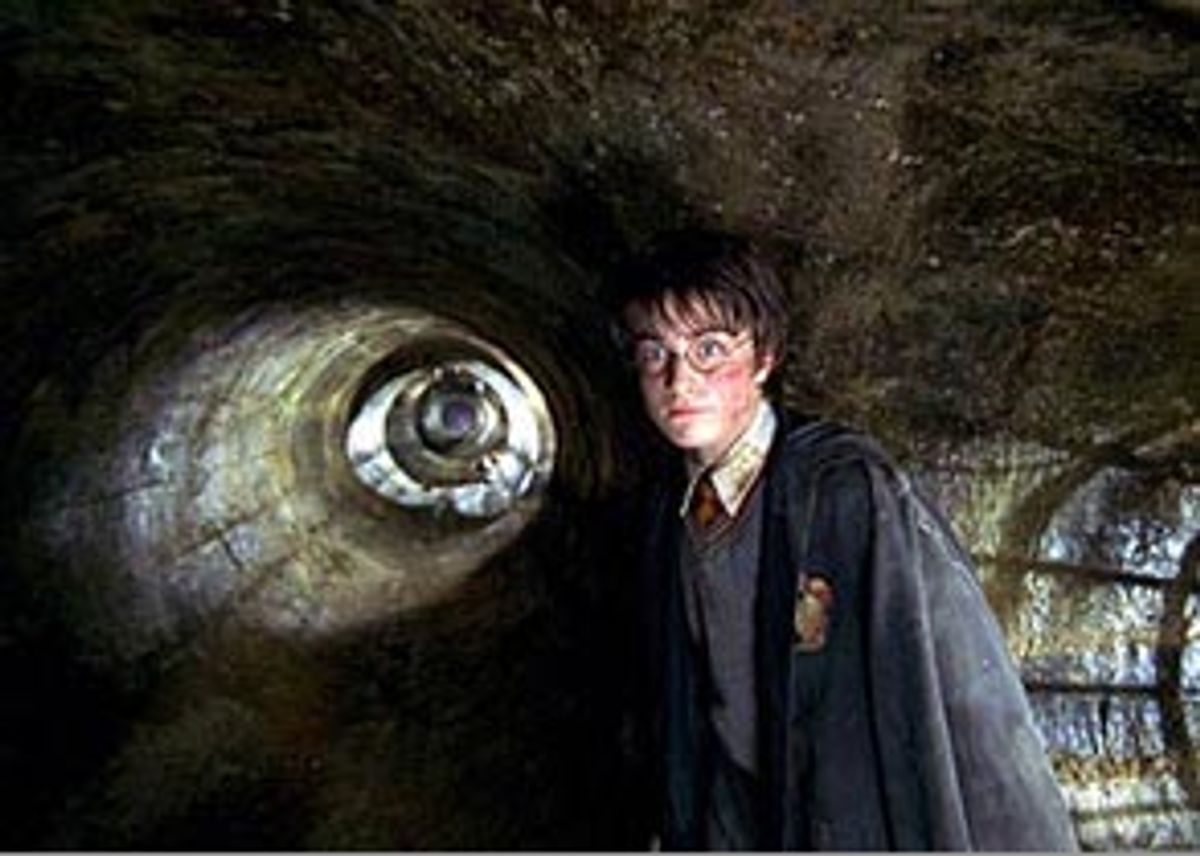 When a movie is touted, and treated, as an event long before it even reaches the theaters, can it ever become a movie again? In the case of "Harry Potter and the Chamber of Secrets," the second installment of the film franchise based on the hugely successful (and wonderful) series of books by J.K. Rowling, the answer is no.

By now we're all used to heavy marketing campaigns for movies. But movies that actually feel like two-hour-plus marketing campaigns are a relatively new phenomenon. Perfunctory, competent, well-oiled and yet still stultifyingly dull, "Harry Potter and the Chamber of Secrets" sells itself dutifully minute-by-minute -- it's the hardest-working movie in show business. It's also an example of the most dispiriting and dangerous trend in contemporary Hollywood filmmaking. "Chamber of Secrets" was clearly made with the utmost care (and plenty of money), yet it simply withers before us like a choked-off mandrake plant. It's starved for the one moviemaking resource that doesn't cost a lot of money: imagination.

It's frustrating that "Chamber of Secrets" is actually an improvement on the first "Harry Potter" movie. For one thing, it starts out with more wit and life than its predecessor -- the movie's early gags carry you along, fooling you into thinking you might actually be swept into the movie. (One of the early scenes features a nicely levitating cake that ends up splooshed on the head of a la-de-da dinner guest, and it takes a crankier person than I am to resist that sort of thing.)

Some of the special effects are lovely: "Chamber of Secrets" marks the appearance of Dobby, a wrinkled elfin slave creature who can appear and disappear instantaneously. When he snaps his fingers, he dissolves into ripply streaks of smoke that echo his wrinkly skin.

And "Chamber of Secrets" doesn't have the chintzy, Hogwarts-from-a-shopping-cart look that its predecessor had; shot by Roger Pratt ("The End of the Affair"), it's bathed in a softer, sometimes spectral light, making it look less garish and cartoony than the first movie. The picture's gloomier sheen suits the story: "Chamber of Secrets" is a darker and more ominous tale than "Harry Potter and the Sorcerer's Stone."

"Chamber of Secrets" has been carefully made, all right. But none of it, unfortunately, adds up to a better movie. Like "Sorcerer's Stone," "Chamber of Secrets" follows the plot of Rowling's book precisely, picking the story up at the very beginning of Harry's second term at Hogwarts School for Witchcraft and Wizardry, the place he has come to call home. (Harry is again played by Daniel Radcliffe, a restrained and serviceable, if unmemorable, actor.)

But before that fresh term can begin, there are two immediate obstacles: Dobby has shown up to warn him that he must under no circumstances return to Hogwarts, or he'll be in grave danger. And Harry's nasty Muggle guardians, the Dursleys (again played by Fiona Shaw and Richard Griffiths), have locked him in his room to prevent him from returning to the school.

Luckily, his pal Ron Weasley (Rupert Grint, whose tireless if well-intentioned mugging becomes wearisome in the movie's first hour and nearly unbearable in its second) swings by to pick him up in the Weasley family's airbound auto. After a few false starts, Harry finally finds himself once again at Hogwarts. There he rejoins the classmates he loves, like the adorable nerdy-girl Hermione Granger (Emma Watson), as well as those he despises, like the devious Draco Malfoy (Tom Felton, who acts as if he's learned everything he knows about hammy villainy from Little Rascals shorts). He's also thrust into a very dangerous adventure: A mysterious hidden chamber has been opened at Hogwarts, and the beast who lives in it is out for blood.

It would be a helpful but boring experiment to watch "Chamber of Secrets" with the book it's based on and a flashlight in hand, comparing, page-by-page, the events that take place in the novel with what director Chris Columbus has put on-screen. I don't think you'd find much digression, or much editing: "Chamber of Secrets," as adapted by screenwriter Steve Kloves, is a filmic replica of its source material, and that's a huge part of the problem.

Rowling's books are rich, thrillingly episodic and Dickensian, both in the way the stories unfold and in the vast array of colors she uses to shade her characters. But Columbus doesn't understand the difference between adaptation and painstaking translation: He moves along from plot point to plot point as if he were filling in a giant sheet of graph paper. Now Harry, Ron and Hermione will consume a potion that will allow them to take the forms of some of their fellow classmates; now Harry and Ron will visit a giant spider's lair; now professor Dumbledore's phoenix will shed a tear with healing powers -- and so on.

The result is that even though the narrative is faithfully detailed, few (if any) of those details capture our imaginations. After its deceptively fleet opening 20 minutes or so, "Chamber of Secrets" settles into a plodding amble, a rickety framework in which many allegedly exciting things happen (students are turned into stone by a mysterious and evil monster; the Weasleys' floating car shows up unexpectedly to bail Ron and Harry out of a terrifying scrape) and are forgotten only minutes later.

The connect-the-dots storytelling of "Chamber of Secrets" also ends up swallowing the actors. Kenneth Branagh is perfectly cast as Gilderoy Lockhart, the school's new Defense Against the Dark Arts professor. You might call Lockhart the Cornel West of Hogwarts; he's the perfect embodiment of the glamour academic, the fellow who's happy to sign copies of his books for his adoring admirers, but who doesn't know (or care) enough about his specialty subject to be any good at teaching it to his students.

Branagh plays Lockhart with lots of grand, funny flourishes -- his lines seem meticulously articulated to match his artfully coiffed hair. The performance is a great in joke that riffs on the way Branagh is so intensely disliked at home in England (apparently, he's viewed as a grammar schoolboy who's just too keen), and Branagh rides that joke like a motorized broomstick. He's great fun to watch.

But mostly, the wonderful actors cast in this movie -- among them Maggie Smith as the stately professor McGonagall, Robbie Coltrane as Hogwarts' oversize and beloved groundskeeper Hagrid, and Miriam Margolyes as the crumpet-shaped professor Sprout -- end up blurring into the movie's background. Only the late Richard Harris, as professor Dumbledore, Hogwarts' headmaster, manages to distinguish himself -- he has only a handful of lines, but he puts so much gravity in them, and carries himself with so much careworn dignity, that the picture glows with life whenever he's on-screen. He's one of the few characters who actually seems to be living in the movie instead of just sweeping through it.

Rowling's books are wonderful for many reasons, not least because they understand how all of us, adults and children alike, yearn for a sense of community and belonging even as we long to set ourselves apart, to feel that we're loved and accepted not in spite of our oddities but because of them. They're also terrifically perceptive about the false hierarchies and prejudices that exist not just in the British school system but in schools everywhere -- or, more accurately, in societies everywhere.

But they wouldn't be as loved, or as successful, as they are if they weren't simply great stories with fascinating characters. "Chamber of Secrets" is discouraging not because it fails to recognize the power of Rowling's books -- it does -- but because Columbus, perhaps knowing he can't match that power, only bows and scrapes to it.

If you're looking for the "Movies can never live up to the books they're based on" argument, you won't get it here. Examining how great books survive the transition from page to screen (or don't) is one of the deepest pleasures of moviegoing. And adapting a beloved book is one of the biggest and most interesting challenges a filmmaker can take on.

But to make a great picture out of a great book, you need a filmmaker who's more than just a footservant at the hands of a master -- you need an artist, not a respectful lackey. The "Harry Potter" movies demand bravery, delicacy, imagination, daring, restraint -- a host of seemingly contradictory qualities. But those qualities can coexist, and when they do, you get magic. Directors like John Boorman, who made the exuberant, superbly mystical "Excalibur," or Alfonso Cuarón, whose "A Little Princess" is one of the greatest adaptations of a children's book ever made, have already proven it.

As luck would have it, Warner Bros. has recently announced that Cuarón will direct the next installment in this series, "Harry Potter and the Prisoner of Azkaban." There in a nutshell is just one of the tantalizing promises that keeps us going to the movies. So far the "Harry Potter" franchise has proved to be a lifeless experiment in authenticity and faithfulness. But like Dumbledore's fabulous phoenix Fawkes, who burns to a pile of ash only to reappear as a huge and gorgeous creature with flame-red feathers, it may yet carry us away.