"Standing in the Shadows of Motown"

A generous documentary spotlights the anonymous hitmakers behind Marvin Gaye and the Supremes but fails to brighten Berry Gordy's dark corners. 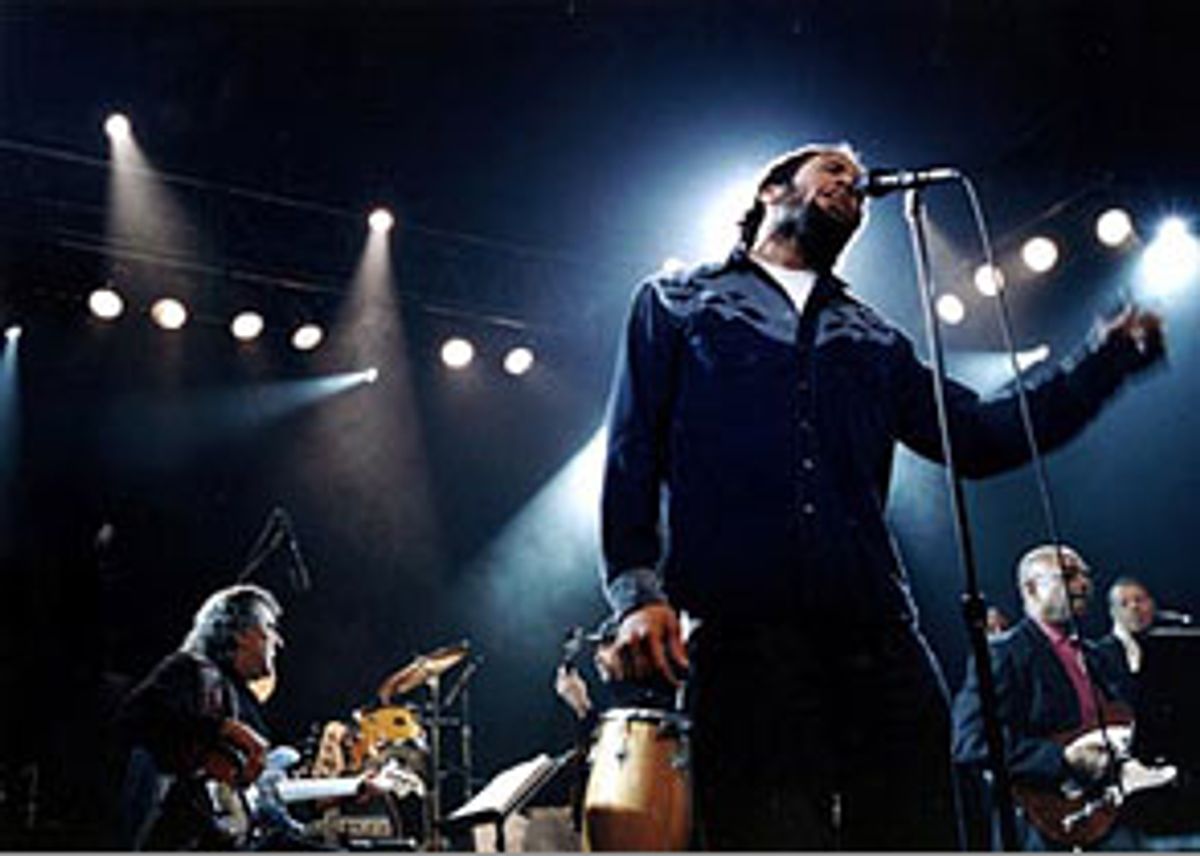 Twenty-three years ago, Greil Marcus described a compilation album called "The Motown Story" as "the history of James Jamerson's bass playing, on fifty-eight hits." Jamerson, one of the greatest of all rock bassists, was part of the uncredited Motown house band, collectively known as the Funk Brothers, who from the late '50s until the early '70s were responsible for the ineffable sound on records by Smokey Robinson, Diana Ross and the Supremes, the Temptations, Little Stevie Wonder, Marvin Gaye and others. It wasn't until Gaye's 1970 album "What's Going On?" that any of these musicians were actually credited on any Motown recording.

Think about that for a moment. Robert White, the guitarist who played the indelible opening riff of the Temptations' "My Girl" -- a musical phrase so perfect, so sublime, that the late critic Mark Moses once said it was nearly impossible to imagine a time when it didn't exist -- did not receive credit for it. Not long before White died in 1993, he was having dinner with the writer Allan Slutsky in a Los Angeles restaurant when "My Girl" came over the music system. "Hey!" an excited White asked the waiter, "Do you hear that?" "Yeah," answered the waiter, whereupon White suddenly told him to forget it. "You were going to tell him that was you, weren't you?" Slutsky asked. Yes, White answered, adding that the young waiter would probably think he was just some crazy old lying guy.

The obscurity of men who performed some of the most popular and beloved music in the history of pop inspired Slutsky to tell the story of Jamerson in his book "Standing in the Shadows of Motown," also the name of a new documentary partly inspired by the book. The director, Paul Justman, wants to rectify the anonymity of the Funk Brothers. He has gathered together the remaining members -- Jack Ashford, Joe Hunter, Bob Babbitt, Eddie Willis, Joe Messina, Uriel Jones and Johnny Griffith (who, sadly, died this past Sunday in Detroit) -- to reminisce, to recall their lost colleagues (in addition to White and Jamerson, Benny Benjamin, Eddie Brown, Earl Van Dyke and Richard Allen), and to perform their music with a host of newer stars taking over the vocals.

It's a noble undertaking. But why isn't it a better movie? Told in scattered fashion, the movie only intermittently lives up to the stories and faces and music of the men who are its subject. Part of the problem is the narration, written by Walter Dallas and Ntokaze Shange, and delivered by Andre Braugher, which glazes the film in the sort of dumbed-down generalizations you find in any installment of "Biography." "They were the days of American innocence ... a fairyland where dreams came true for the young stars ... timeless classics," are just some of the stale phrases used, so vague and recycled as to be meaningless. (Isn't it time for writers and filmmakers to learn there never was a time of "American innocence"?)

There's also a fair amount of misinformation in the narration as well, starting with that false old chestnut that "white performers" (read: Elvis) simply smoothed out black music for a white audience (a profoundly ignorant claim that takes no note of the culture Elvis came out of or the wide variety of music that influenced him). The narration also claims that black musicians had no success in reaching pop audiences. This is stated over a clip of performers like Jackie Wilson, who hit the Billboard Top 40 chart (not the R&B chart) 20 times from 1958 to 1963, and Ruth Brown, who sold more records for Atlantic than any other performer in the '50s. Justman's filmmaking is only too happy to fall to the level of the narration, for instance cutting away from a performance of "What's Going On?" for a montage of cops beating up civil rights protesters, the March on Washington, combat footage from Vietnam.

Maybe the idea of matching the Funk Brothers with contemporary performers was supposed to make some point -- as if it needed to be made -- about the timelessness of their music. But that music, songs like Martha and the Vandellas' "Heat Wave," Marvin Gaye's "I Heard It Through the Grapevine" and Jimmy Ruffin's majestic "What Becomes of the Broken Hearted" deserve a hell of a lot better than the treatment they are given by mediocrities like Joan Osborne and Ben Harper. "Motown was America's introduction to soul music," says Harper. And you're America's goodbye to it, I felt like saying.

Meshell Ndegeocello at least doesn't stink up the place with "You've Really Got Hold on Me" but her approach has none of the tension of Smokey Robinson's original (or of John Lennon's even better vocal on the Beatles' cover), none of the erotic rising and falling sense of a climax approached and then sublimated. Gerald Levert, whose specialty is slick bedroom-eyes soul, proves himself a lot gruffer than you'd think when he covers the Four Tops' "Reach Out I'll Be There" but the damn fool filmmakers cut away from him (they don't, at least, make a similar mistake when he covers Junior Walker and the All Stars' "Shotgun"), just as they cut away from Montell Jordan and Chaka Khan on "Ain't No Mountain High Enough."

Even at their best, the guest vocals are only adequate, which gives the lie away to one fellow who's interviewed and says that Deputy Dawg could have sung on these songs and made them hits. Uh-uh.

What holds the movie together is the Funk Brothers themselves. These men obviously take great (and justified) pride in what they accomplished, and the bond between them seems fierce and durable. In the movie's most touching moments, Meshell Ndegeocello asks bassist Bob Babbitt if, after the Detroit riots of 1967 and Martin Luther King's assassination the following year, he ever felt unwelcome because he was white. Babbitt starts to talk to her about how he was accepted by his fellow musicians, he tries to relate the love he feels for and from them, and he simply stops, choked up, unable to go on. And I was moved by Ndegeocello's response, the way this young black woman lays her hand on the shoulder of this older white guy.

It seems fair to deduce from various comments made in the film that there is no love lost for Motown founder Berry Gordy. The Funk Brothers often worked 14-hour days seven days a week for what seems like not much pay. They moonlighted on other artists' recordings and in Detroit clubs to supplement their pay, while Motown tried to recruit Johnny Griffith to spy on them so he could tell who was breaking their exclusive contract (Gordy didn't want others to get the Motown sound). Griffith, to his credit, took the job, at $100 extra a week, and lied. (When they realized he wasn't providing any information, the company ended the arrangement.) Not only did Gordy not credit the Funk Brothers on the records, but they suffered other insults as well: A few months before James Jamerson died, he had to scalp a ticket to get into the taping of the Motown 25th-anniversary television special.

Maybe the Funk Brothers didn't want to badmouth their old boss. But I wish Justman were a more probing interviewer, that he had gone more into the label's treatment of the musicians. The timeline of the movie is roughly chronological, but apart from the mention of individuals like the producer Norman Whitfield, who tried to adapt psychedelia to the Motown sound, there's very little consistent sense of how the sound developed and changed. Often the contributions are treated in lackluster fashion. The powerful keyboard playing of Earl Van Dyke is given a large buildup. But the editing fades out his introduction to the Four Tops' "Bernadette," a piece of music that defines the power and drama of his playing, a perfect match for the force of the Tops' vocalist Levi Stubbs.

The sense of Motown history is often patchy. Gaye's "What's Going On?" is hailed as Motown's topical breakthrough, but nobody mentions that Berry Gordy didn't want to release it. And frankly, other Motown hits -- tougher, harder, more uncompromising songs -- had taken Motown into topicality before Gaye's personal statement. I'm thinking of two numbers in particular, the Temptations' horrifying and seductive "Cloud Nine" (which, like their even greater "Papa Was a Rolling Stone," puts much of rap to shame), and "Love Child," which remains Diana Ross and the Supremes' greatest moment. The accelerating desperation of Ross's vocal belies the sensation the song gives, a sensation akin to the way time stretches out in the seconds before a car crash.

But there is one thing that "Standing in the Shadows of Motown" does accomplish, almost unintentionally. While giving the Funk Brothers their due, it also gives Motown its due. Why does Motown need respect at this point? Well, like the eternal and pointless arguments about who was better, the Beatles or the Stones, Motown has long been locked in a critical battle with the rougher soul that came out of Atlantic and Stax/Volt from the likes of Aretha Franklin and Otis Redding. And, like the Beatles, Motown has been found wanting, accused of being smoothed down for a white pop audience. Critics have pointed to the finishing school Motown had for its performers to prepare them for playing supper clubs.

But by far the most harm done to Motown's reputation was ironically one of the things that jump-started its latter-day popularity: "The Big Chill." What was offensive about the use of Motown in that movie was the way in which it reduced the music completely to nostalgia, making it a relic for yuppies instead of a still-potent force. That work has been taken up by the proliferation of oldies radio stations, which, by divorcing the music from any present-day reference, attempts to remove it from history. Or at least to use history as a synonym for what is archaic and finished. Maybe it's the pleasure the Funk Brothers still take in playing this music that allows "Standing in the Shadows of Motown" to make it sound so vital, but I don't think that's entirely it.

Had the movie relied entirely on recordings and not shown the musicians playing a note, it would still sound vital. The movie implicitly ridicules the notion that this music was polite pop, not just by citing the obvious examples, the gruff drama of the Four Tops, the sexy ebullience of Martha and the Vandellas, but also by reminding us of the glories of the smoothest music Motown produced, the gossamer eroticism of Diana Ross and the Supremes -- and of Smokey Robinson and the Miracles, who may have achieved sublimity more often than any performers except the Beatles. If "Standing in the Shadows of Motown" sends anyone back to their Motown LPs and CDs to marvel at music that has become so familiar that we take it for granted, then it will have triumphed over its ragged, indistinct shape.