Initial reports said Palestinian gunmen brazenly fired on Jewish worshipers in Hebron. The reports were wrong -- but the U.S. media has yet to correct them. 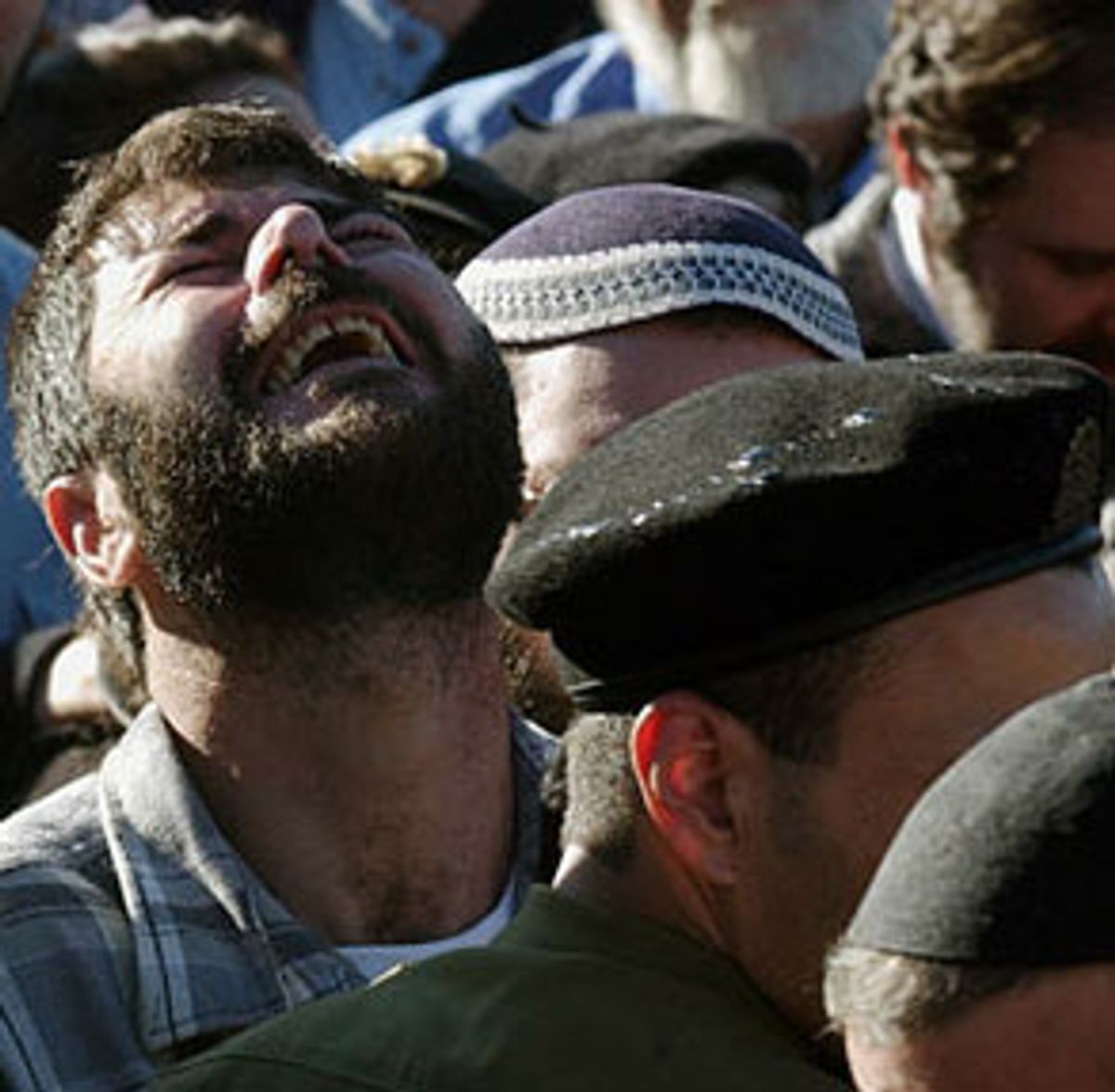 The headlines over the weekend were startling, even for the Middle East, where the Israeli-Palestinian war seems trapped in escalating cycles of violence. On Friday evening in the predominantly Palestinian city of Hebron, gunmen hiding in houses and olive groves ambushed Jewish worshipers as they walked home from Sabbath prayers, spraying them with gunfire and even tossing grenades into the unarmed crowd. Israeli soldiers, who escort the worshipers every Friday night, rushed into a dark dead-end alley to try to help. After a four-hour gun battle, 12 Israelis were dead. Government officials, led by the hard-line foreign minister, Benjamin Netanyahu, quickly dubbed it the "Sabbath Massacre."

The gun battle was alarming -- and made headlines worldwide -- not only because Israel's military suffered its heaviest one-day loss in years but also because of the demented idea that gunmen would open fire on unarmed worshipers as they walked home from prayer.

No doubt that's what provoked outrage from Pope John Paul II, who expressed anger over the "vile attack, just as people had finished praying." Also, United Nations Secretary-General Kofi Annan leveled one of his strongest attacks against Palestinians and the "despicable terrorist attack that killed Jewish worshipers on their way to the Sabbath Eve prayers."

The American press rushed to report the gruesome details. "Ambush; 12 Israelis Murdered at Prayer," read the New York Post's Saturday banner headline. According to the Post news account, "The attack began when Palestinian snipers hiding in houses fired automatic weapons and tossed grenades at dozens of Jews on their way to one of Judaism's holiest sites."

It's now clear that none of those initial press reports from Hebron were accurate. In truth, Jewish worshipers returning home were not fired upon by Palestinian gunmen, who instead waited until the civilians were behind settlement gates before they started shooting at Israeli soldiers. None of the worshipers died. The 12 Israelis killed were security guards or soldiers. Three Palestinian gunmen were also killed.

It's one thing if the early, erroneous press accounts simply reflected confusion surrounding a chaotic event like an ambush. But over a three-day period, American news outlets had a chance to correct or at least clarify what happened in Hebron, but few of them did.

With a dozen Israelis dead, the distinction between who the Palestinian gunmen shot at may seem trivial. But there is an important difference, particularly in how the world sees the conflict, between opening fire on unarmed worshipers and targeting trained soldiers, who many Palestinians see as part of an illegal occupying force. It's crucial that the press be able to make clear distinctions between armed combat and acts of terrorism against civilians, especially as the United States leads a global war on terrorism.

What became clear by Saturday in Israel was that the ambush did not occur as originally described by government officials. Or as described by one self-professed witness who phoned Israel's Army Radio and, in a live interview, insisted "the group of Jews were slaughtered." His early, vivid accounts lent credence to the idea of a civilian massacre. On Monday, however, the man admitted that he'd been in Tel Aviv during the Hebron attack and had misled the media with his phony accounts.

Even before the man's arrest, Amos Harel, writing Sunday in the Israeli daily Ha'aretz, declared: "What happened in Hebron on Friday night was not a 'massacre,' nor was it an attack on 'peaceful Jewish worshippers' returning from prayers. The attack actually began several minutes after all of the worshippers had already returned safely. Those killed Friday were killed in combat. All of the victims were armed fighters, who were more or less trained."

The Jerusalem Post reported that the first ambush shots did not ring out until after the "all clear" had sounded on the soldiers' radios, "meaning worshipers had been safely escorted to their homes after Shabbat prayers." Speaking with the Israeli press, Matan Vilnai, a former Israeli general, told reporters over the weekend: "It wasn't a massacre, it was a battle."

And in Sunday's Washington Post, which was virtually alone in putting the Hebron events in perspective for U.S. news consumers, the paper quoted the leader of the Israeli settlement in Hebron, who explained civilians were not targeted in the alley gun battle: "It was a pure military event. The worshipers had passed a quarter of an hour before."

Yet many news organizations failed to clarify that point. On Saturday, the Los Angles Times reported that "Palestinian gunmen ambushed Jewish settlers." In its follow-up story on Sunday, when it was clear the paper's original dispatch was not accurate, the Times ignored any mention of settlers being attacked -- or not being attacked -- in the Hebron battle.

Again and again that pattern was repeated over the weekend, as newspapers ignored or obfuscated the facts. After telling readers in its Saturday headline that 12 Israelis had been "murdered in prayer," the New York Post blurred the facts on Sunday, referring vaguely to Israelis (meaning soldiers) being ambushed.

Even the New York Times, which probably allocates more resources to covering the Middle East than any other newspaper, seemed confused about the events in Hebron -- either that, or it was unwilling to correct its initial mistake. Like every other outlet, the paper first followed the lead of Israeli government officials and reported that worshipers had been ambushed. On Sunday the Times, still citing the Israeli army's version of events, wrote the attack was "a carefully planned assault on Jewish settlers" and went into detail about how the ambush was triggered by passing worshipers.

It was not until Monday that the Times, in the 11th paragraph of its third Hebron ambush story, finally explained to readers: "The Israeli Army initially said the attack was on Jewish worshipers, but it appears to have been directed at security forces who guard settlers."

Even then, the newspaper did not pursue the question of whether members of the Israeli government purposely misled reporters about the ambush for political gain.

It's worth noting that the first reports of a so-called civilian massacre originated from the office of Netanyahu, Israel's newly appointed foreign minister. On Friday night, his spokesman told reporters that Jewish worshipers on their way to prayers were brutally attacked and murdered by Palestinian terrorists.

The former leader of the right-wing Likud Party, Netanyahu recently joined Ariel Sharon's coalition government, but he will challenge Sharon for the prime minister's post in the January elections. It's possible that, by initially hyping the attack as the "Sabbath Massacre," Netanyahu was trying to pressure Sharon to drive Palestinian leader Yasser Arafat into exile, a provocative move Netanyahu has been advocating for months. Sharon didn't do that -- but in what some observers see as a concession to Netanyahu's far-right conservative challenge, he did approve the creation of additional, and controversial, Jewish settlements in Hebron following the ambush.

No doubt the initial, false claims that Palestinians massacred worshipers helped ease the way for that move. All the more reason the press should be asking pointed questions about Hebron.