Small Internet radio broadcasters on the brink of financial disaster have won some breathing room, thanks to the senator from North Carolina. 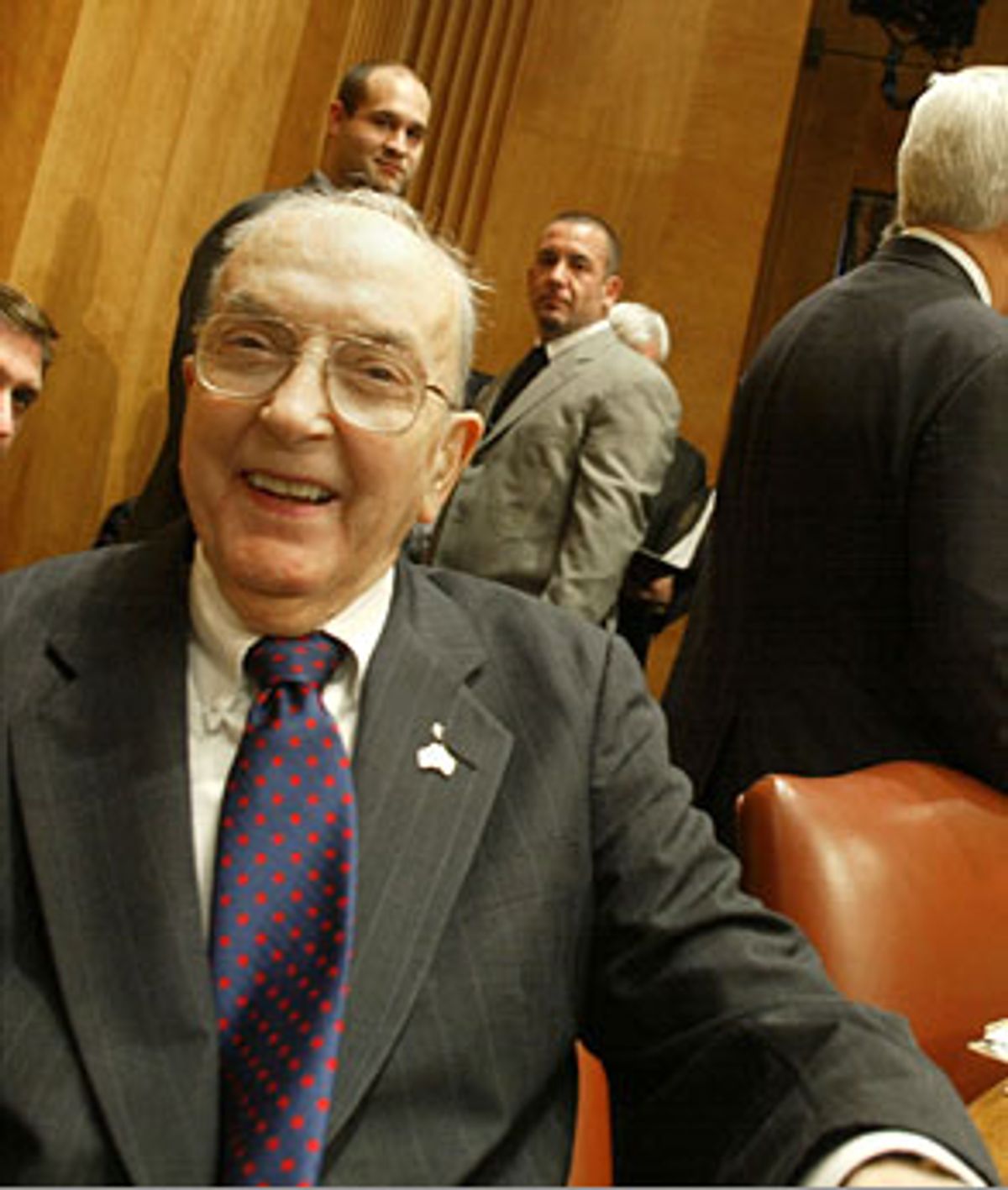 For the noncommercial Web broadcasting community, mostly composed of politically left-leaning independent and college radio stations, an unlikely ally has emerged to help in their fight against potentially crippling royalty payments. He is Jesse Helms, the Republican senator from North Carolina, and while his actions may very well be motivated by the interests of small conservative Christian Internet broadcasters, his support for the Small Webcasters Settlement Act (SWSA) has compelled some noncommercial station backers to feel for him what they never imagined they could -- gratitude.

Helms first involved himself in late October, when a version of the bill reached the Senate after unanimously passing a vote in the House of Representatives. Several senators, including Helms, voiced concerns that the bill lacked provisions to protect small and noncommercial webcasters. As a result, Helms moved to block the legislation, the only senator to do so.

Few can deny Helms chose an opportune moment to intervene on behalf of webcasters. His move to block the first version of the bill came just days before an Oct. 20 deadline imposed by the Library of Congress for webcasters to make retroactive payments on all songs played per use since October 1998. The fees are often referred to as the CARP royalty, so named after the Copyright Arbitration Royalty Panel established by Congress to set fees that webcasters must pay the recording industry for use of their copyright-protected music. Webcasters and their allies complained the fees were far too high for most to afford and, if left unaltered, would most likely spell doom for many small and noncommercial Internet radio stations.

Helms' blocking action prompted many webcasters to hail him as an unlikely hero. The amended version of the bill, rewritten by Helms and his staff, unanimously passed through both houses of Congress on Nov. 14. Advocates called it a huge victory for Internet radio. "I think it opens a new window of opportunity to come to terms," remarked Will Robedee, general manager of Rice University's KTRU and the driving force behind Save Our Streams, a Web site dedicated to the advocacy of small webcasters' rights.

The SWSA will create that opportunity by suspending all royalty payments for noncommercial webcasters until May 31, 2003. It also ensures that they pay only a percentage of revenue to recording labels rather than the per performance fee negotiated earlier this year by CARP.

The original version of the SWSA, often referred to by its pre-Senate title, House Resolution 5469, once had the support of a grass-roots campaign led by members of the small and noncommercial Internet radio community. Web broadcasters around the country encouraged their listeners to lobby Congress to support the payment-delaying resolution. Their actions culminated in a day of silence on May 1, when hundreds of Internet broadcasters joined to protest the CARP fees.

In its original form, HR 5469 was meant to give webcasters a six-month reprieve before they faced the high cost of retroactive fees. The resolution would have also postponed meeting the reporting requirements, which mandated that all stations supply the recording industry with statistical information about each song they play. Many hoped to use this time to legally challenge the terms imposed by the recording industry.

But to the dismay of many independent webcasters, the recording industry, along with a small group of 13 or so commercial stations that refers to itself as the Voice of Webcasters (VOW), negotiated a backroom deal that many complained largely ignored the concerns of nonprofit and very small commercial stations. Critics of that version, which was heavily supported by Rep. F. James Sensenbrenner, R-Wis., argued that negotiations were made hastily to beat the Oct. 20 deadline for the imposition of CARP fees.

"Noncommercial stations were not represented in the negotiations. The issue was discussed in great detail by members of Congress and the recording industry well before negotiations took place," says Robedee.

The outcome left college radio and independent stations feeling uncertain about their future. As a result of the ambiguity surrounding their fate, many webcasters such as WFMU, a critically acclaimed station that broadcasts from Jersey City, were prompted to begin the time-consuming process of contacting record labels independently to ask them to sign agreements that would release their stations from having to pay for playing music online.

"While helping some small commercial webcasters, the negotiations that led to the [Sensenbrenner version] did not take the smallest webcasters into account. Instead it left over a thousand stations in the dark that weren't considered in that legislation. The process has been terrible," lamented Ken Freedman, WFMU's station manager. "Noncommercial stations rallied listeners to write congressmen," Freedman continued. "I have a lot of sympathy with them."

Though it sounds as though Freedman's opinions are in line with the consensus, at least one pundit seems less supportive of Helms' blocking the Sensenbrenner version. "I thought that the Sensenbrenner negotiation helped the class of webcaster most in jeopardy without hurting anyone else," remarked Kurt Hanson, publisher of the Radio and Internet Newsletter (RAIN).

In response to the ultimate passage of the SWSA, however, Hanson is less critical. "In the end, I'm pleasantly surprised that Helms does look like a hero."

The Helms-sponsored amendment significantly eases the pressure that many of these stations were feeling. But does the SWSA adequately address the needs of small and noncommercial webcasters?

"No," argues Freedman. "The only thing the bill itself does is delay retroactive payments until next year and invites negotiations between the RIAA and noncommercial and non-CPB stations. This is hopeful, but rates themselves have not been adopted or even proposed. Noncommercial stations should have a better deal. At very minimum they should be given the deal NPR was given."

The NPR deal Freedman refers to was one made between the Recording Industry Association of America (RIAA) and the Corporation for Public Broadcasting, which represents NPR affiliates. While the exact terms of the negotiations have been kept secret, insiders say that at least part of the deal ensures that if an NPR station has fewer than 10 employees it is exempted from record-keeping requirements.

"CARP has yet to set reporting requirements for stations like ours," said Jeff Herrick, voluntary program director at WXDU in Durham, N.C. "Even logging just the song and artist information is tough for us. We don't have an electronic system."

Statistical information will be collected by Sound Exchange, an organization that will also collect and distribute royalties to the more than 400 record labels it represents. At a recent panel held at the CMJ music festival in New York, Sound Exchange spokesman John Simson sounded sympathetic to the plight of community stations.

"We understand that college stations have small staffs and we're trying to bring down [reporting requirements] to a reasonable level," said Simson. "But we've also been frustrated. When [college stations are] asked to help us we don't get much response."

Not so, says Freedman, who also participated in the conference panel.

"Simson shocked me when he said he hadn't received an actual proposal from noncommercial broadcasters. I know at least the Collegiate Broadcasters Inc. for sure has put out a fairly coherent proposal."

The CBI has indeed initiated a response. A trip to its Web site reveals that back in April it issued its comments in an official notice to the Copyright Arbitration Royalty Panel that was submitted to the U.S. copyright office and the Library of Congress. Other documents on the site demonstrate the financial burdens that college radio stations are already under as a result of having to pay ASCAP and BMI royalty fees.

For now, many are simply content with the apparently burgeoning sense of collaboration among the recording industry, artists, Congress and webcasting stations. "RIAA and webcasters went hand in hand to visit congressional offices [during SWSA negotiations], says Hanson, the RAIN publisher. He sums up the situation best by saying: "This could be a harbinger of a new era of cooperation between labels and webcasters. They should be working together. I hope they can."