Sure, it might not have a plot, but Steven Soderbergh's sci-fi reverie floats through space on a cloud of pure cinema. 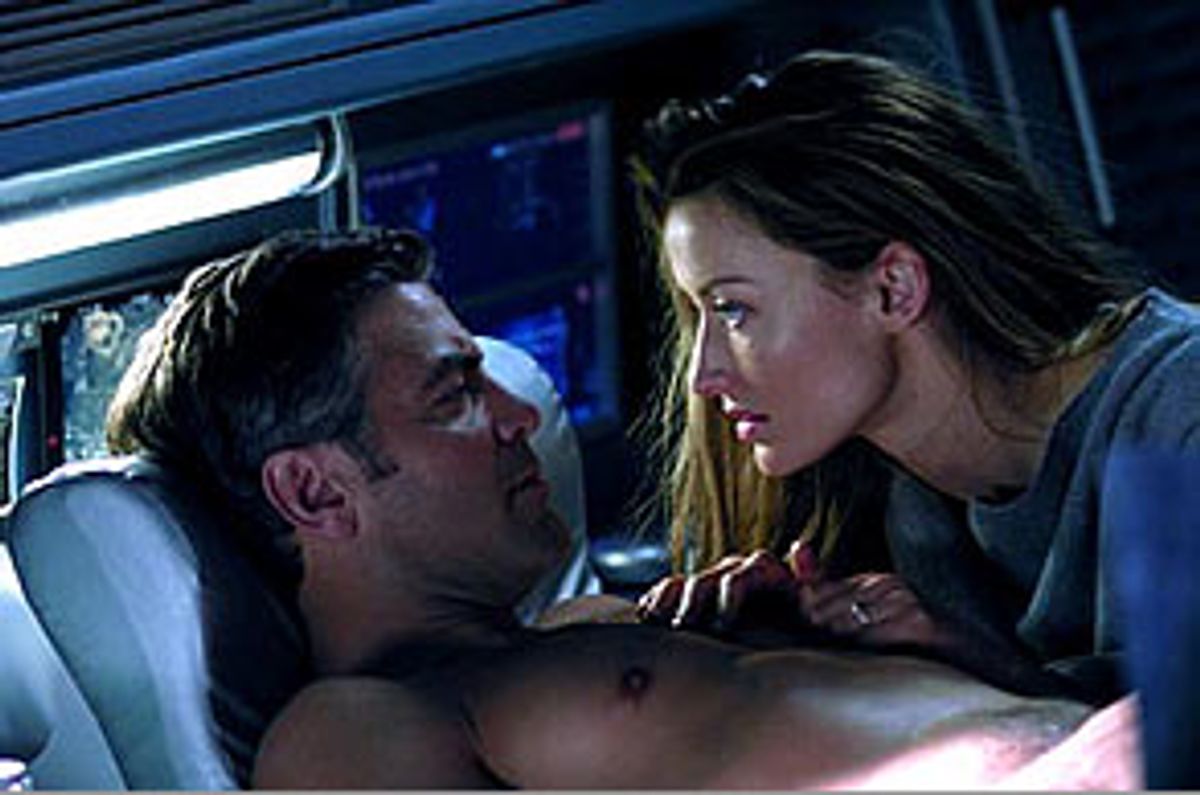 There's no way to talk about "Solaris," Steven Soderbergh's visually astonishing and thoroughly admirable new film, without giving away some crucial pieces of its story. So if you're a reader who's determined to avoid spoilers of any kind, I advise you to go elsewhere. (Actually, my view is that the spoiler obsession, born of the Internet's fan-geek culture, is the enemy of real criticism, real discussion and maybe even real thought, but that's a subject for another time.) Furthermore, there's a larger point here: There are some movies, more of them than we customarily acknowledge, whose story hardly matters, and "Solaris" is one of them.

Despite his penchant for wistful romance and his tendency to moralize, Soderbergh's real strength as a filmmaker has always been for color and light, form and composition. (See "Traffic," where supernal cinematic art was deployed to send the message that Drugs Are Bad.) On one hand, it seems remarkable, even outlandish, that the same director who remade the Rat Pack caper flick "Ocean's Eleven" would go on to make a new version of Andrei Tarkovsky's "Solaris," a languorous, Soviet-made art film that (like most of Tarkovsky's work) pushes at the outer edges of philosophical abstraction. But in fact they are adjacent chapters in the same larger work, driven by the same iMac ice blues and brilliant crimsons toward an art that's almost purely pictorial. (I will confess here that I took a pass on Soderbergh's last film, "Full Frontal," as did many other people.)

Beneath the surface chatter and the nervous convolutions of plot -- and I don't think Soderbergh cares half as much about plot as he thinks he does -- "Ocean's Eleven" and "Solaris" may in some sense be the same movie. Both are meditations on lost love, in which George Clooney (who is Soderbergh's muse, mirror and canvas, just as much as Marlene Dietrich was Josef von Sternberg's) recovers a dark-eyed beauty from his past. When the characters at the end of "Ocean's Eleven" gaze, with some inscrutable surmise, into that fountain on the Las Vegas Strip, they might as well be staring into the similarly-hued waters of the ocean planet Solaris, where Clooney meets his destiny in the new movie.

Soderbergh spent a reported $47 million of Fox's money on "Solaris." Frankly I applaud him for every nickel -- these days, Hollywood filmmakers routinely spend twice that sum to manufacture crap -- but it's not at all clear how much of that money will be coming back. The studio has primarily promoted the film as a love story starring Clooney and a beautiful woman, which has the virtue of A) being true and B) sounding like something lots of people might want to see. What the publicity doesn't make entirely clear is that most of the movie is set on a mostly deserted space station orbiting a planet that has some kind of psychological and/or spiritual powers (never specified or defined) and that the beautiful woman in question may be an alien creature or a fantasy projection but is in either case the not-quite-convincing simulacrum of a dead person.

In a recent Entertainment Weekly interview, Clooney and Soderbergh sounded almost gleeful about the fact that test audiences came away from "Solaris" thoroughly bewildered. A friend who probably knows movies better than I do (but hasn't seen the Tarkovsky "Solaris" or read the original Stanislaw Lem novel on which both films are based) didn't understand a basic plot point after seeing it.

What's interesting about that -- beyond the schadenfreude of imagining the suits in Burbank sweatily awaiting the film's opening -- is that Soderbergh (who wrote his own screenplay) has gone to some lengths to make the Lem-Tarkovsky material less elliptical and more accessible. He has tried to make psychologist-astronaut Chris Kelvin (Clooney), who takes the lonely voyage to Solaris, a recognizable human character with a specific emotional trauma in his past that shapes his future. Soderbergh's "Solaris" is at least an hour shorter than Tarkovsky's supremely meditative exercise (which, I should make clear, is one of my favorite films) and far more crowded with incident.

Oddly, though, none of that seems to matter. Even in the hands of a professed atheist and humanist like Soderbergh, "Solaris" can never be realism. It remains an oblique, allegorical fable that tangles with various big-ticket topics: mortality, grief, loss, the prodigious creative powers of the mind, the mysterious ways of God, the fact that we are both infinitely far away from the dead and oh so close to them. Perhaps even more than Tarkovsky's film, Soderbergh's feels like a purely formal exercise, a visual and philosophical voyage (in the obvious vein of Kubrick's "2001: A Space Odyssey") that begins and ends at the same point, our own planet, which turns out to be no more "real," no less rich and strange, than Solaris itself.

We meet Kelvin on Earth, at some unspecified point in the space-travel future, as he mumbles and buzzes his way through his working life as a psychologist or sits stolidly in a support group for survivors of something or other. Clooney looks as handsome as ever, but here it's a grave, almost architectural handsomeness -- he's never given a performance so free of his trademark rakish charm (and may never do so again). An old friend named Gibarian (Ulrich Tukur) puts in a video call from deep space: Something weird is happening aboard a recently privatized space station called Prometheus and he needs Kelvin to come immediately. In the muted, earth-toned, rainy Seattle of these early scenes, Kelvin barely seems like a man tethered to his life at all, so off he goes.

There's not much in the way of high-tech conveyances in this film; fans of outer-space gizmology may feel let down. Kelvin is transported to Prometheus in the twinkling of an eye, which ought to be a big fat clue that we're nowhere near the conventional realm of sci-fi movies. (There is some violence in "Solaris," but most of it is emotional in nature; this movie's action quotient approaches absolute zero.) Soderbergh's effects budget seems to have been expended on the nearly motionless tableaus of outer space, which has never been rendered with such intensity, on the blue, glowing, God's-eye orb of Solaris and on the over-bright, corporate-clean and more than faintly creepy interior of Prometheus.

Gibarian is dead, and the floors and ceilings of Prometheus are marked here and there with blood. The station's resident shrink, Dr. Gordon (Viola Davis, so good as the family maid in "Far From Heaven"), won't come out of her room, although she recites for Kelvin's benefit a long list of the clinical disorders she has diagnosed in herself. The only other survivor is Snow (Jeremy Davies), a stringy-haired geek who seems pretty disconnected from reality himself and can only mutter, "I could tell you what's happening here, but I don't know if that would really tell you what's happening here."

There are other people on board Prometheus too, and they weren't part of the original crew. Everyone on the station receives "visitors," people from Earth or from their past, dead or alive. At least they look and act like people from the past, although their memories are patchy, they don't know where they are or how they got there and they apparently can't be killed. By this time it's clear that Kelvin is still haunted by the death of his wife, a lovely, sharp-featured brunette named Rheya (Natascha McElhone), and when she first appears to him on Prometheus he is understandably shocked and terrified. Of course this isn't his wife, out here on the edge of some boiling, protean planet that seems to be alive; he wants nothing to do with this invader.

"What was that?" Kelvin asks Snow. "Yee-aah," says the latter, chewing on his split ends. "What about that? I'm still working on that."

But outer space is a lonely place, and what does it mean to say that the pseudo-Rheya (who of course reappears after Kelvin banishes her) isn't real? How real are any of us? She knows who she is; she loves him; they're together again. Isn't that what matters? At about this point in the Tarkovsky film, the astronaut-hero and the rest of the space-station crew slip into a sort of lotus-eater daze of gratified longing. They don't know why Solaris is supplying them with visitors, and they suspect and even expect that the whole thing won't end well. But what does? They have been given the miracle of a second chance, and life is too short and space too immense to interrogate miracles.

Soderbergh attempts to establish this contemplative mode rapidly by staging a confrontation between Kelvin and Dr. Gordon, who has become determined to shed the visitors and return to Earth, and by resurrecting Gibarian to warn Kelvin against logic: "If you keep thinking there's a solution, you'll die here." We begin to see fragments of Kelvin and Rheya's courtship and life together on Earth, and eventually the circumstances of her death, presumably as a way of making Kelvin's grief and guilt specific and individual.

As always with Soderbergh, this comes from an honorable dramatic impulse, but it's not handled all that gracefully. Clooney and McElhone (a slightly awkward beauty and a refreshingly grownup actress) make a winsome pair in these flashback scenes -- yes, Clooneyphiles, you do get a brief, tasteful glimpse of his firm derrière during a bedroom interlude -- but the chronological back-and-forth is distracting and overdone. Why do we want to see a couple dorkily flirting in a bookstore when, in a parallel story line, a guy is trapped in deep space with his dead wife, who is starting to figure out who she used to be and who she is now?

Soderbergh's film is probably not the equal of either Tarkovsky's 1972 predecessor or the memorably Byzantine prose of Lem's novel, but in the end, almost despite himself, this able craftsman has made a brave and lovely companion piece to both of them. His ending is pure cinema at its most marvelous and moving; it brings Kelvin full circle and renders irrelevant all questions about where he is, whether he's alive or dead, whether he's with Rheya or alone. He's in a movie, after all, and if that's not immortality it's about the closest thing we've got.