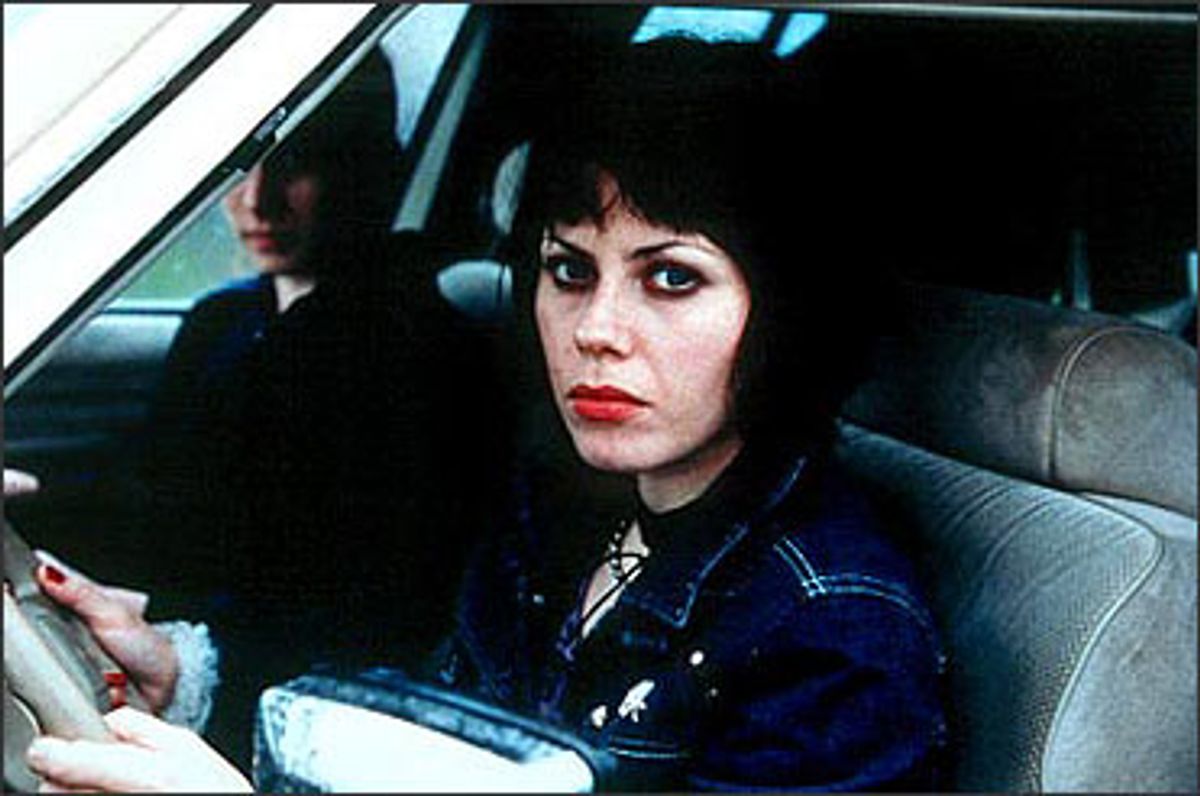 You want to like Rebecca Miller's "Personal Velocity," the movie she adapted from her own story collection. The movie is confident and assured. It tries hard to be real, moving from suburban homes to Brooklyn apartments to roadside diners and strip mall parking lots. And, as the most recent entry in a collection of low-budget pictures shot on video, it achieves a warm look and an intimate feel.

"Personal Velocity" is a film with strong actresses and wonderful intentions -- mostly. It mercilessly deletes four portraits from the book, and then trims the fat off the remaining trilogy. Doing so, it has details to burn. A character "bought a pair of beige separates and took a job at an insurance agency." A precious little girl in the corner of the screen says, "Come here, you fucking cat."

But something about "Personal Velocity" seems clumsy, and maybe even venal. In a way, it plays like a dated feminist tract, one of those works that wants to show women making tough decisions and being emotionally resilient, but is at root about them being screwed over by men. You might call it victim art. Publishers Weekly said it a different way, positing that reading Miller's book "is a bit like watching the Lifetime channel with the sound off."

The movie is broken up into three parts that are linked together by a slight device: They happen at the same time. In the third piece, Fairuza Balk has been walking next to a man who is hit and killed by a car. We hear about the accident in the first two stories.

The stories are related in other ways. Each is named after its heroine. Each of the heroines has to make a life-changing decision in the face of a crisis. All the women are played by cool downtown New York actresses. All the heroines are, in some way, victims of bad men. And oddly enough, each story is narrated by a male voice. (You know, because it's a book.)

The first section stars Kyra Sedgwick as Delia, a faded sexpot with "an ass that could stop traffic." Delia married a man who appreciated her for exactly that quality. The regard faded, however, and he's started beating her. After a particularly brutal assault, Delia escapes with her children and looks for a new life, first at a home for battered women and later in a small town.

Delia is a working-class woman, and Sedgwick plays her as tortured, beaten down and angry. The story is weird, though. Delia drives a beat-up Saab (which seems right) and hangs a Rainbow Unicorn air-freshener from the rearview mirror (which seems wrong). She's looking for a way to become an individual again -- not just an object for men to walk all over. Miller suggests that she can do it by going back to the detached sexuality she practiced in high school.

The men in Greta's life are not so bad. They don't beat her, for starters. Greta, played by Parker Posey, is actually married to a pretty good man. He's a fact-checker at the New Yorker, and he obviously adores her. Yet her father, a successful lawyer, says that he "lacks size."

The bad man in Greta's life is Dad. He was cheating on Mom, and when Greta found out she quit Harvard Law School and became a low-level editor at a big book publisher. Now they don't talk, partly, it seems, because Greta isn't doing anything of size herself.

That changes, however, when she ends up editing a hot Laotian author and becomes successful. Greta has made a cozy life for herself, but it's one without a lot of ambition. She's caught between two personal velocities -- hanging kitschy Keane paintings with her husband and a pair of hot fuck-me heels.

I liked the third piece best. Goth princess Fairuza Balk plays Paula. She's just pregnant. She's also just witnessed an awful accident and narrowly escaped death. In something of a state of shock, she climbs in her car and drives to her mother's home, picking up a hitchhiker along the way. The boy, it turns out, has been horribly beaten.

There are all kinds of bad men in the last story: a father who walked out on Mom, an asshole to replace him, a noncommittal boyfriend, a thieving kid, and presumably the sadist who beat him silly. What I like about the story, though, is that the decision Paula makes about her future is her own, and it's not a spiteful one. It's something small, a tiny revelation. Balk experiences it as such, and then celebrates it as something greater.

It's the kind of thing I wanted more of in "Personal Velocity." Because there are a lot of things to like here. The movie plays to the strengths of digital video. It's intimate, fast-moving and free. Action moves in and out of the tightly framed shots. The visual techniques are nice too, and they seem distantly experimental yet matched to the story and the footage around them. We see action go by, for example, in a series of slide-show stills that offer us freeze-frame characters trapped in a series of moments.

The opening credits of "Personal Velocity" are girly and nostalgically romantic. We hear girls laughing on a playground, see them swinging back and forth, their gingham dresses dappled with blown-out sunlight. The trees are bare.

I don't know what Miller's point is here. Maybe it's merely that all the women in her film started as something so pure. Maybe that's what they're all trying to get back to in some way. The thing I took away from that opening was that it was small, and looked beautiful. There was some technique and a little confusion. It didn't seem to have a conflict all plotted out and neatly resolved. The thing I didn't like is that the rest of the movie did.