Bin Laden's alleged plea to the American people tries to co-opt every anti-U.S. complaint on the globe. 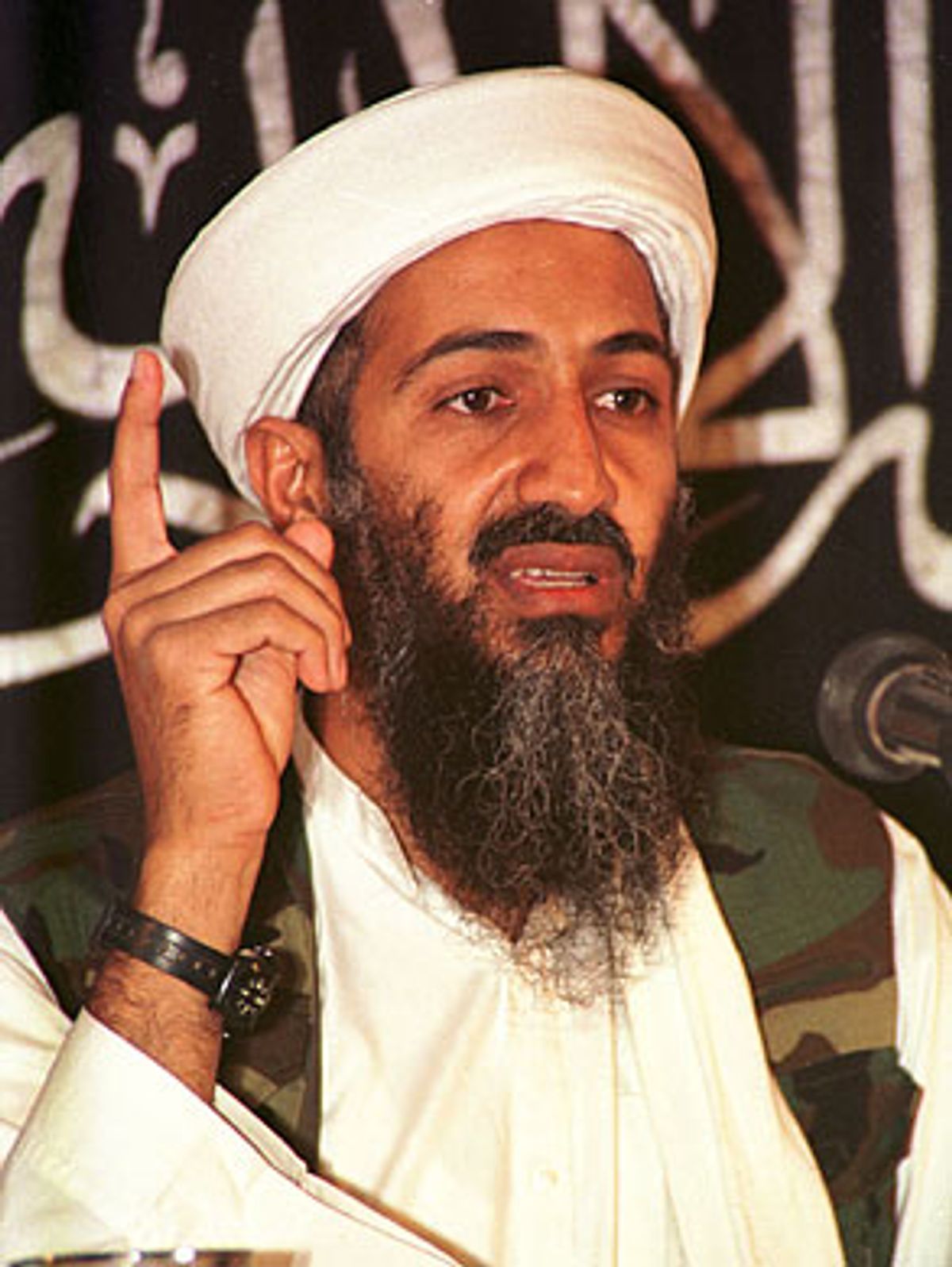 There's no way to know for sure whether the latest missive ostensibly from Osama bin Laden actually comes from the hand of the arch-terrorist. But experts suspect that if the 4,000-word manifesto, published in translation on Sunday in London's Observer, wasn't penned by bin Laden himself, it's the work of one of his followers, and it shows al-Qaida again trying to broaden its message, positioning bin Laden as some twisted Che Guevara of the new anti-Americanism.

In bin Laden's alleged "Letter to the American People," he peppers his complaints about U.S. foreign policy with a vast litany of American sins, from dropping the atomic bomb on Japan to withdrawing from the U.N.-sponsored Kyoto Protocol to fight global warming. The letter goes beyond excoriating the American military presence in Saudi Arabia to indict us for our drug habits, greedy corporations, exploitative advertising and tawdry presidential blow jobs. Many of its criticisms echo those made by reasonable people worldwide -- which is why some experts say it might resonate in pockets of intense anti-American alienation.

And that's frightening, because the letter also contains al-Qaida's most comprehensive justification ever for deliberately targeting American civilians.

According to the Observer, an Arabic version of the letter was sent out on a list run by Saudi Arabian dissident Mohammed al-Massari. Parts of it, if not the whole, are taken from a letter that Yosri Fouda, a correspondent for the Al-Jazeera news network, received on Nov. 17 through "previously tested channels" for getting al-Qaida communications, as he told CNN Nov. 18. Neither the State Department nor the Defense Department has commented on the letter.

"It certainly seems legitimate to me," says Peter Bergen, author of "Holy War Inc.," who interviewed bin Laden in 1997. "It's of a piece with almost all of his previous statements."

Others aren't so sure. Youssef Ibrahim, a senior fellow at the Council on Foreign Relations, doubts that bin Laden is particularly concerned with Monica Lewinsky or the Kyoto treaty and suggests that the letter "might be people taking the original Osama bin Laden messages and reconstructing them, adding to them." Still, he doesn't think it's a joke -- merely a reflection of the growing list of grievances against the United States among those sympathetic to bin Laden. "It's serious in the sense that it shows you how much of this sentiment is out there," he says.

Which suggests that someone connected with al-Qaida -- if not bin Laden himself -- has systematically appropriated a whole globe's worth of anti-American complaints. It wouldn't be the first time.

Initially, al-Qaida's major grievance was the U.S. presence in Saudi Arabia. It said less about the plight of the Palestinians. "Bin Ladenites have always failed to attract any following among Palestinians because they are latecomers to the Palestinian cause," says As'ad AbuKhalil, a research fellow at the Center for Middle Eastern Studies at the University of California at Berkeley and the author of "Bin Laden, Islam & America's New 'War on Terrorism.'" But by turning up his anti-Zionist rhetoric, bin Laden has created the impression in much of the world that he's avenging Palestinian suffering.

The same tack is likely to be taken if America attacks Iraq, even though bin Laden is a fierce enemy of the secular Saddam Hussein. "You have starved the Muslims of Iraq, where children die every day," the letter reads, going on to blame U.S.-led sanctions against Iraq for the death of Iraqi children. "Yet when 3,000 of your people died, the entire world rises and has not yet sat down."

"Initially, al-Qaida couldn't give a hoot about Iraqi children or the Palestinians. Now they're going to use them any way they can to garner sympathy," says Harvey W. Kushner, chairman of Long Island University's criminal justice department and the author of "The Encyclopedia of Terrorism."

Al-Qaida seems to be hoping it can do the same thing with the unhinged fringe of legitimate social-justice movements. "It's a very astute campaign to flood the market with real and unreal statements that can have some clout in winning people over," Kushner says. "Was it written by his hand? I doubt it. But it's not a hoax. It would be a hoax if it was put out by a bunch of college students from Nebraska, and I'd be very surprised if that was who issued it. What matters is, it's out there."

What's out there is an eerie mélange of conspiracy theory, religious fundamentalism and utterly mainstream opposition to things like globalization and American military hegemony.

"It is saddening to tell you that you are the worst civilization witnessed by the history of mankind," the letter begins. It launches into paranoid attacks on Jewish domination and America's responsibility for the AIDS virus, but then returns to earth, saying, "You have destroyed nature with your industrial waste and gasses more than any other nation in history. Despite this, you refuse to sign the Kyoto agreement so that you can secure the profit of your greedy companies and industries."

Elsewhere a paragraph begins with "Your law is the law of the rich and wealthy people, who hold sway in their political parties, and fund their election campaigns with their gifts." That's a pretty common complaint. But it's immediately followed by "Behind them stand the Jews, who control your policies, media and economy."

This combination of common sense with megalomaniac fantasy and incitements to violence is what makes the letter so clever, says Nancy Snow, a professor of communications at California State University at Fullerton and the author of "Propaganda, Inc.: Selling America's Culture to the World."

"What's hard for Americans reading this is that there is a lot of truth in it," she says. "A lot of similar criticisms have been waged by dissidents or dissenters. These are not the ramblings of some lunatic. It comes across as very well-reasoned, hitting the right hot buttons. This letter really points to a sophistication of language and an understanding of what our weak points are, where our vulnerabilities are in the world."

Meanwhile, she says, America is utterly failing in its attempt to get its point of view across to the Muslim world. The U.S. government is airing documentaries abroad about Muslim families living happily in America, but, Snow says, "These ads are showing how great we live here. They're just like Pepsi commercials. Everyone in the world knows how well we live here -- in part that's what bin Laden is taking advantage of."

Indeed, part of what makes al-Qaida's letter so unsettling is that it suggests just how much more they know about us than we know about them. "You've got to understand about Osama bin Laden. He is quite widely read," says Bergen, the "Holy War Inc." author. "I was at a class in Georgetown for foreign-service students. They were asked, 'Does anyone in class know what Donald Rumsfeld did during the Vietnam War?' No one knew. He was secretary of defense [at the war's end]. In the last bin Laden audiotape, when he talks about Donald Rumsfeld being guilty of the killing of 2 million people, he makes a quite intellectually defensible point."

By interspersing his polemic with such defensible points, bin Laden threatens to do two things: win a few converts and de-legitimize the issues he's co-opting. Kushner worries more about the former, saying, "What they're trying to do is develop a moral equivalency: Their ends justify their means, the same as ours do." Already, Kushner says, posters that replace the classic image of Che with bin Laden have been showing up at anti-globalization rallies, which the right has had a field day with. Kushner believes the new manifesto could broaden bin Laden's appeal.

Obviously, the overwhelming majority of anti-globalists, environmentalists and antiwar activists aren't going to listen to bin Laden. His violence and his injunction to "reject the immoral acts of fornication, homosexuality [and] intoxicants" are anathema to that crowd. "He is a legitimate leader to many, but he's not a legitimate leader to those of us who care about the nonviolent transformation of society," Snow says.

But that doesn't mean al-Qaida isn't hoping to skim off a few of the movement's extremists. "I think he's trying to steal some of that oxygen from the global civil protests taking place," she says. "He's very good about playing on people's sympathies for those left behind. In part he's trying to get new recruits, to manipulate younger minds who see him as willing to take on the West."

And while a few such recruits may not mean much to al-Qaida's ranks, they could be devastating to champions of the causes bin Laden is trying to piggyback on. "It muddies the waters because there are legitimate criticisms of corporate-driven foreign policy," says Snow. Activists "want to be careful not to get thrown into the same category [as bin Laden] by those saying, 'You're either with us or with the terrorists.'"

Yet according to Bergen, al-Qaida's forays outside radical Islam are the least of our worries right now. After all, the main point to emerge from the manifesto is a stark one: Killing American civilians is morally justified. "There's a much more careful delineation of why American civilians should be attacked" than in any previous communications, Bergen says. Essentially, bin Laden argues that since America is a democracy, its citizens are complicit in the actions of its government. According to the letter, says Bergen, "we've freely chosen the government that is oppressing the Palestinians and killing Iraqis, and since Americans have made a free choice to elect the government that does these things, they should be attacked."

This argument matters for one simple reason. "When bin Laden said he made no distinction between military and civilians targets in 1998, nine weeks later the embassies in Africa blew up," Bergen says. "His statements have been a very reliable guide to his actions."