A "Fellowship" for fanatics

Why the Eye of Sauron was the bane of Peter Jackson's life, and other knowledge I gleaned from the extended DVD of "The Lord of the Rings: The Fellowship of the Ring." 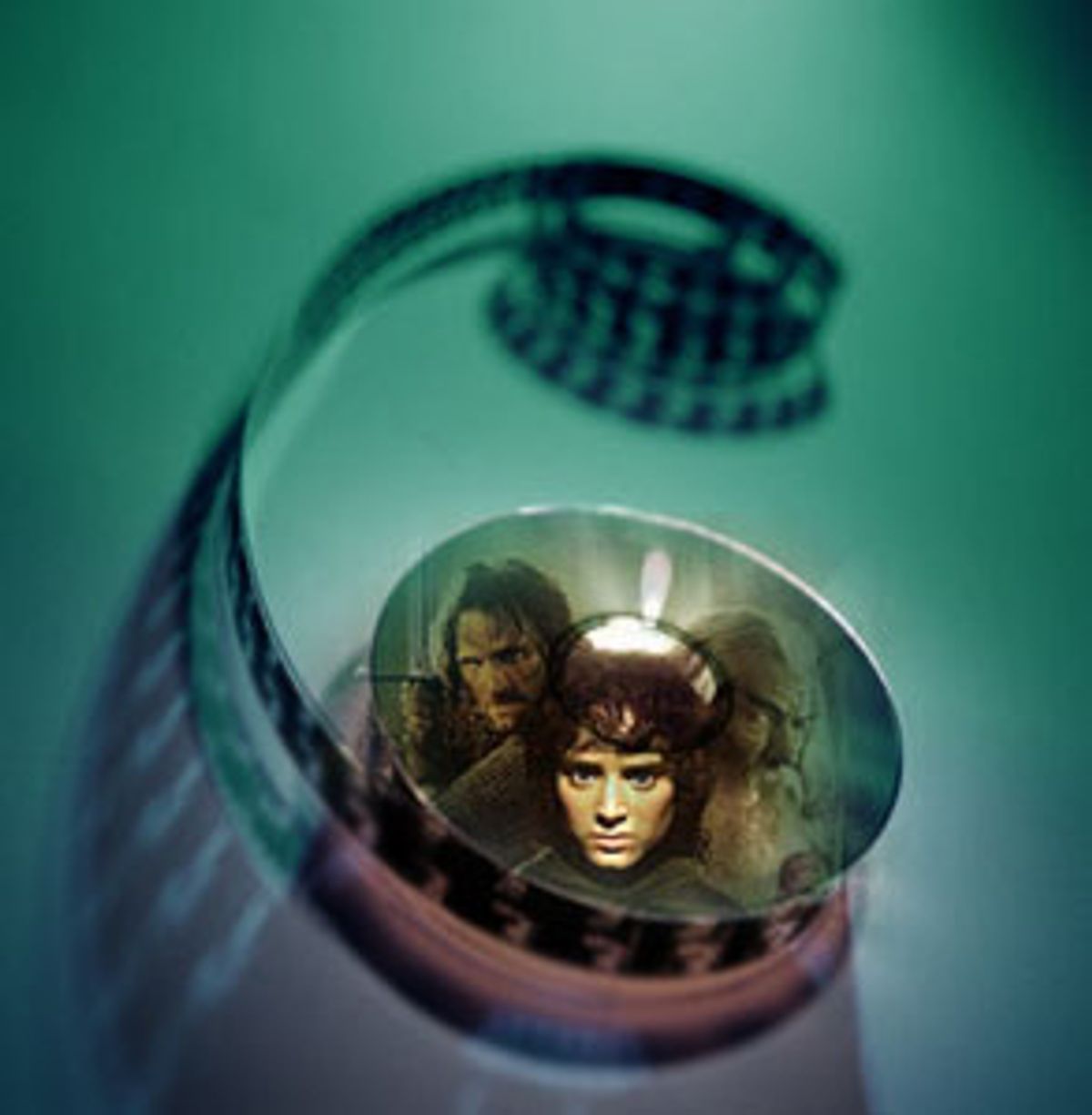 The value of the extended DVD edition of Peter Jackson's "The Lord of the Rings: The Fellowship of the Ring" is a tricky matter. Without a doubt, the theatrically released version of the film is a superior movie, quicker off the dime and less likely to dawdle over intriguing peripheries like one of those friends who insists on stopping to investigate every garage sale on the way to Sunday brunch. A filmgoer who has no investment in J.R.R. Tolkien's novel and thought the movie was pretty good should be perfectly satisfied with the DVD of that version of the film, released earlier this year. How far beyond that you want to go depends on just how geekish you're feeling.

If you loved the movie and love the books -- to whatever degree -- the additional 30 minutes added to this version of "The Fellowship of the Ring" will make it alluring. They mostly consist of back story and scene-setting, but these bits -- a few shots of the stone trolls left over from Bilbo's adventures in "The Hobbit," the tromp through Midgewater Marsh, etc. -- are dear to the novel's admirers, sometimes irrationally so, and seeing them is like stumbling across a photo of an old friend. Jackson insists that this is an "alternate" cut of the movie, not a "director's cut," because as much as he likes the restored footage (which has been burnished with additional music by soundtrack composer Howard Shore), he knows the theatrically released cut works better as cinema. Like the best DVDs, this one teaches you a bit about the particular movie at hand and a lot more about how movies are made in general; in this case, you can see how good filmmaking sometimes means slicing out good material.

What's best about "The Fellowship of the Ring" is still terrific: the almost scary commitment of all the performances (my sole reservation is Hugo Weaving's slightly campy Elrond); Elijah Wood's translucent, stricken cherub's face; the expert comic relief delivered by Billy Boyd and Dominic Monaghan as Pippin and Merry, who have the panache of Shakespearean clowns; the terrifying Black Riders; the mad dash for the Bucklebury Ferry; the mines of Moria. Then there's the magnificent horsemanship; when was the last time you saw that, let alone fight scenes that look like real fighting -- sweaty, confusing and very, very hard -- instead of like a gymnastics demonstration performed in zero gravity? (This is a movie that, however extravagantly it may ravish the eye, always lets you know how much everything weighs.) Finally there's the New Zealand landscape, seemingly wilder and grander than any other place on earth, and what is, for me, the film's gem, Sean Bean's performance throughout Boromir's last stand, a sequence that never fails to break my heart.

What the extended version offers is, among other things, an introductory bit called "Concerning Hobbits," starting with Bilbo writing a treatise of the same title and leading into a montage of Hobbiton's residents going about their cozy activities. There's a jolly scene of Frodo, Merry and Pippin drinking and singing in the local inn; one of Bilbo hiding from the Sackville-Bagginses, his detested and greedy relatives; a bit more here and there on Aragorn's romance with Arwen, who will eventually have to choose between an immortal life with her own people and an exiled mortal life with him; Gandalf reciting the ring poem in the Black Speech during the Council of Elrond; snippets of conversation that deepen the relationships between Frodo and Bilbo, Aragorn and Boromir, Frodo and Gandalf, Legolas and Gimli.

But for Tolkien cognoscenti, probably the most exciting restoration is a much longer Lothlórien sequence, including Galadriel's gift-giving scene. The movie doesn't really need a long, chatty interlude at this point, but even so this bit felt truncated in the theatrical version, the only less than graceful aspect of the adaptation.

For the obsessed, the extended-edition DVD also contains many hours of documentary features on Tolkien, the adaptation of his novel to screen, filming and postproduction. There are four audio commentary tracks (writers and director; cast; designers; the production/postproduction team). Just how essential it is to know that the production employed its own glass blowers or that co-writer Fran Walsh (also Jackson's life partner) supplied the shrieks of the Ringwraiths or that the moth that carries Gandalf's plea for help to the eagle Gwaihir was a live moth and not a computer effect is a question each viewer must answer for himself. This stuff is kinda fun, but, on the other hand, life is short.

Sometimes I felt like Sean Astin's mom, who, he claims, plugs her ears every time someone starts to explain how certain effects were achieved and shouts, "No, no, no! It's real! It's real!" In particular, the documentary titled "Scale," which explains how the hobbit and dwarf actors were made to look smaller than the rest of the cast, has ruined the film a bit for me, since I can't watch it now without thinking, That's Kiernan! (Yes, you even get to know the scale doubles by name if you watch all of this stuff.)

But the short doc on a postproduction technique called digital grading turned out to be fascinating, demonstrating how computer artists can alter the color and contrast on existing film with such subtlety that the form becomes even more painterly. I liked hearing the actors admiring small aspects of each other's performances that I might not otherwise notice and learning that Jackson considered the Eye of Sauron "the bane of my life. To have your central villain be nothing more than a flaming eyeball is a little bit of a problem." I don't care about the details of CGIs, but that's just me. Oh, and there's an archive of over 2,000 still images, to boot.

Mostly, though, I marveled at how the movie hasn't paled for me, even though I had to watch it three times in fairly close succession to check out the commentaries. Either I'm a lot geekier than I realized or Jackson and company are even better filmmakers than I suspected. (Or both.) Just one more question you'll have to answer for yourself.