Bold words from a wobbly man

John DiIulio is now begging the White House's forgiveness for his scathing attack on its tyranny of "Mayberry Machiavellis." But he should be begging ours. 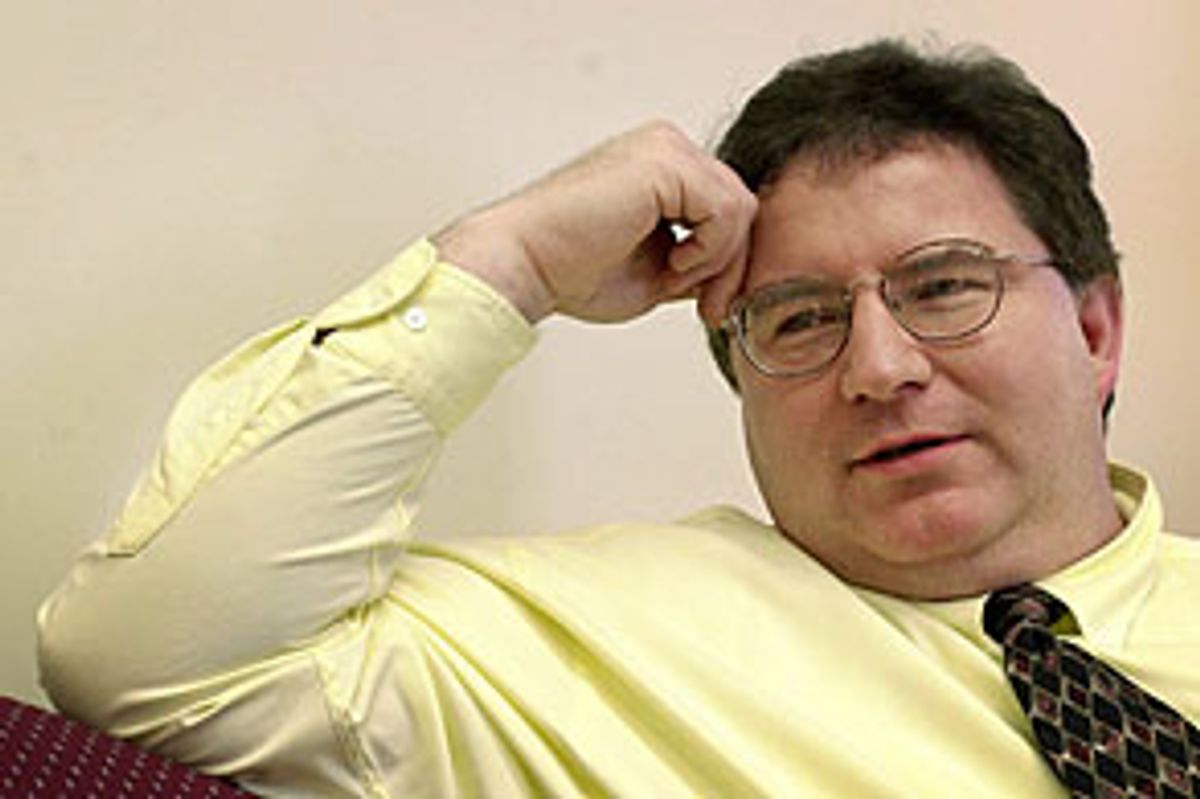 What's not to like about John DiIulio? In Ron Suskind's latest Esquire opus on power, politics and the Bush White House, the former director of Bush's Office of Faith-Based and Community Initiatives comes off as the administration's rumpled conscience, the lovable, badly dressed, working-class Italian-American Democrat hired to put the compassion in "compassionate conservativism" -- until he belatedly, painfully realized it was just a campaign slogan and went back to academia, sadder but wiser, in February 2002. And then he bravely unburdened himself in the pages of Esquire about what he saw during his brief, sobering stint in Karl Rove land.

"There is no precedent in any modern White House for what is going on in this one: a complete lack of a policy apparatus," declared DiIulio, in the quote that by now has been round the world. "What you've got is everything -- and I mean everything -- being run by the political arm. It's the reign of the Mayberry Machiavellis."

DiIulio is the hero of Suskind's piece, which is due on newsstands this week. Think "Columbo" meets "West Wing": He's the shambling guy in the rumpled raincoat, inevitably disarming his betters with his savvy, his courage, his plain-talking likability. Suskind sets us up early to admire DiIulio as the rarest sort of intellectual: a guy who's capable of growth and change. He made his name in the early 1990s as the author of the "superpredator" theory of juvenile violence -- the notion that the rising tide of juvenile crime was attributable to a demented new breed of kids: fatherless, godless, lawless, utterly without conscience. He teamed up with conservative scold William Bennett to write the book, "Body Count," and soon conservatives jumped on DiIulio's research to call for tougher punishment and an end to the namby-pamby social work approach to juvenile crime.

Then DiIulio, admirably, recanted his theory in the late '90s, when he saw that it was bolstered by little evidence. In fact, he decided, poor urban kids in trouble could change, if they got the right kind of help. And he quickly became a fervent apostle of what many right-wingers would consider namby-pamby social work, except it's practiced by mainly black churches under the toughest conditions in inner city neighborhoods. Soon he was hanging with black preachers and calling for a new "faith-based" approach to social problems -- and soon, for DiIulio, that was just as all-encompassing a solution as "superpredator" had been a problem.

I admired DiIulio for his change of heart back then. But now I'm starting to worry about all of his shape-shifting. The very day his bracing criticism of Rove and the White House made national news, he apologized to his former colleagues, twice. It was a strange, cringe-inducing spectacle, with language out of a Soviet show trial: He called his own criticisms, as quoted by Suskind, "groundless and baseless due to poorly chosen words and examples." Bush spokesman Ari Fleischer had earlier called his complaints "groundless and baseless," so his use of the same terms seemed rote and creepy, like he'd either been beaten up or lobotomized. "I sincerely apologize and I am deeply remorseful," he said in a statement.

DiIulio needs to apologize, badly -- but it's not to Rove and the White House. It's to the American public he hoodwinked last year by serving as the frontman for Bush's faith-based initiative, and whom he betrays now by recanting what he told Suskind in an apparently uncharacteristic burst of bravery. The initiative DiIulio helped launch became exactly what its critics said it would: a patronage windfall for the Republican right. Christian right-wingers at first criticized DiIulio's faith-based plans. Some worried it might give money to Muslims, Hindus and Scientologists; TV preacher Pat Robertson saw it as a "narcotic," addicting independent Christian organizations to the drug of government funding. Now guess who's getting a big injection from Bush's "Compassion Capital Fund," established last year as one of the president's first faith-based initiatives: That's right, Pat Robertson, whose dubious charity "Operation Blessing" got a $500,000 rush in the first round of funding.

DiIulio left the White House when it became clear that right-wingers would hijack his plans to federally fund a grass-roots network of religious do-gooders who were less interested in proselytizing than in helping kids. He knew the right-wing Christian lobby wanted to turn the program into a gravy train for their pet organizations and other conservative allies of the administration -- and free them from the anti-discrimination laws that normally govern religious charities that get public money. So when DiIulio resigned, I applauded his decision.

But now, after DiIulio's on-again, off-again performance as a man of conscience, I'm not so sure. He left his ivory tower for the West Wing where he wrangled with the big bad Karl Rove, and Rove won. Now he's blaming Rove -- or maybe now he isn't. After all his flip-flops, I came away respecting Rove more than I do DiIulio -- which isn't much. But at least Rove knows what he believes in and fights hard to win, which is more than DiIulio can say.

In his interview with Suskind, DiIulio plays the old refrain, "If only the king knew what his courtiers were doing." He insists he remains a "passionate supporter" of the president he served, the man who called him "Big John" and made him one of his first appointees. "President Bush is a highly admirable person of enormous personal decency," he told Suskind. "He is a godly man and a moral leader. He is much, much smarter than some people -- including some of his own supporters and advisers -- seem to suppose. He inspires personal trust, loyalty, and confidence in those around him."

Of course, DiIulio himself is doing exactly what so many Bush detractors do -- underestimating the man, and blaming Rove for twisting Bush around his little finger. He ignores the fact that Bush is the president and Rove does nothing without his backing.

Bush and Rove have always placed politics above policy, and they hoodwinked DiIulio and lots of voters that way. Just one example jumps out: During the 2000 campaign, Bush made headlines by attacking House Republicans for trying to slow down payments to low-income working parents who qualify for the Earned Income Tax Credit, an innovative program to reward work that was vastly expanded by the Clinton administration. Candidate Bush said the Republican EITC proposal would balance the budget "on the backs of the poor" -- exactly the kind of compassionate conservative courage that won the hearts of centrists and Democrats like DiIulio. The House GOP backed down. But that was then. Now President Bush stands idly by while conservatives inside and outside his administration propose to cut the credit, slash the funds used to let low-income wage earners know it exists, boost funds to audit those who use it, and perhaps even eliminate it entirely. DiIulio blasts this poor-bashing in Esquire, complaining that he often found himself arguing the merits of EITC "with libertarians who didn't know the basic functions of major federal programs." But he doesn't blame the president who put those libertarians in charge of social programs.

The chubby, ethnic, working-class DiIulio is still in thrall to his WASPy betters.

While I take issue with Suskind's narrative device -- DiIulio as lonely hero -- I still admire the reporter for what he's done in his two Esquire portraits of the Bush administration's inner workings (the first was a Karen Hughes profile that featured White House chief of staff Andrew Card worrying that with Hughes' departure, the administration had lost the only person capable of standing up to Rove and his unbending insistence that policy serve politics). Suskind is the lone reporter to date to really pull back the curtain to reveal the wizard behind Bush in all his ferocious glory. And you can see why DiIulio won Suskind's respect. He was the only current or former White House source who -- at least momentarily -- had the nerve to dis Rove on the record. "Karl just went from prime minister to king," one scared anonymous source told Suskind after the midterm GOP victory. Suskind was treated to an exhibition of Rove's intimidating style while waiting in his outer office to interview him, overhearing him roar at an aide about a political operative who'd screwed up: "We will fuck him. Do you hear me? We will fuck him. We will ruin him. Like no one has ever fucked him!" Then Rove called in Suskind for their interview, in which he mouthed bland nothings.

It's not that DiIulio is wrong about Rove's crucial White House role. But the only reason the Bush dynasty allows him to play that role is because he's such an effective Bush partisan. DiIulio might be afraid to bite his master's hand  but let's be clear, that master is Bush, not "the Mayberry Machiavelli."

And, of course, now he's even begging for Prince Karl's forgiveness. DiIulio's habit of recanting grows tedious. First he renounced his superpredator theory -- though unfortunately the harsh mandatory sentencing laws it helped usher in remain on our books. Then he turned his back on the faith-based initiative after it became a GOP patronage tool. Now he wants to take back all the courageous criticisms he leveled at the feverishly politicized Bush White House. Let's hope that the wobbly-kneed DiIulio's surprisingly bold White House critique has as long a shelf life as some of his dubious social theories.