A dizzying feature from the self-consciously deranged makers of "Being John Malkovich" imagines Nicolas Cage as a chronic masturbator and Meryl Streep as a mean, mean Susan Orlean. 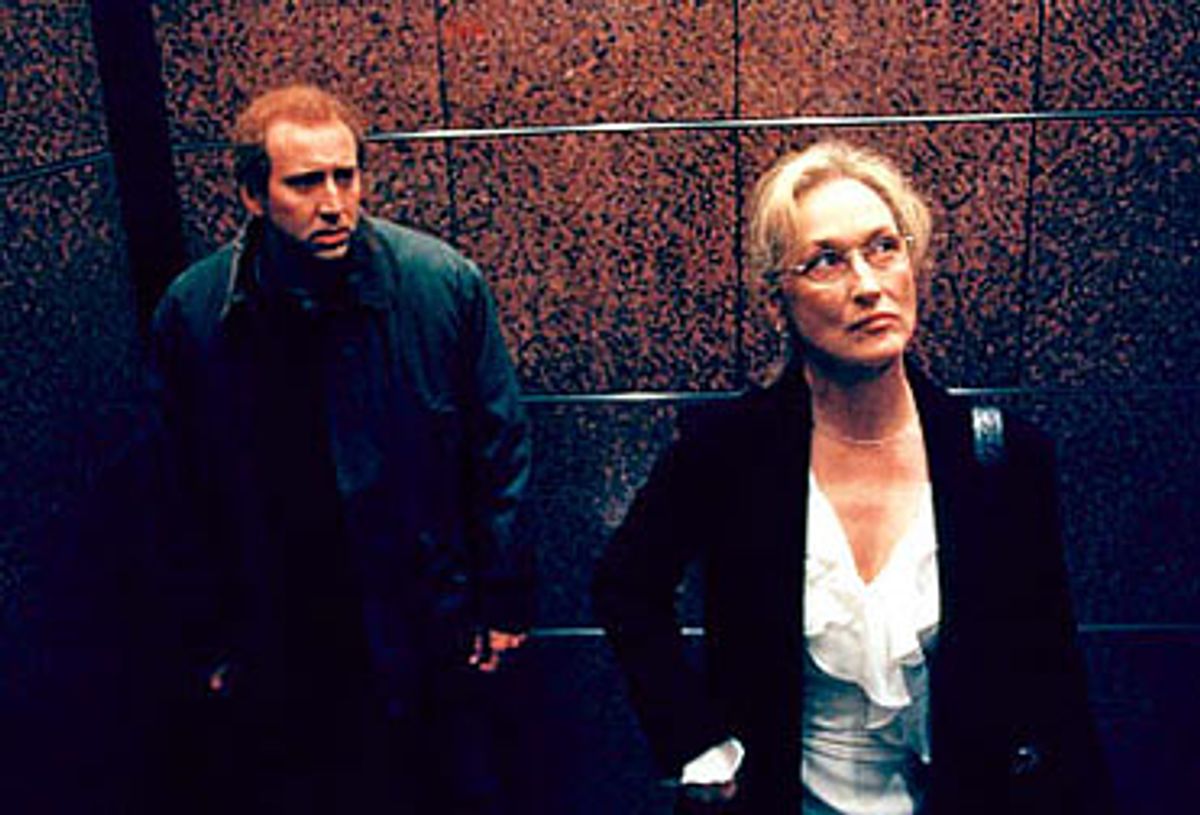 This new movie from director Spike Jonze and screenwriter Charlie Kaufman, the pair of self-consciously deranged geniuses who brought us "Being John Malkovich," isn't sure it wants to be a movie at all. It might be an essay on the intolerable fakery of movies, or a narrative that is, to get really ponderous on you for a second, always in the process of deconstructing itself. It might just be a spoof of all such pretensions, as well as of the movies themselves. It might be the movie in which Jacques Derrida meets Monty Python, except that I have the vague feeling that describes our entire culture: Marilyn Manson, Harry Potter, Oprah, J.Lo, George W.

"Adaptation" is a movie about adapting a book into a movie, which ends by concluding it can't be done. More to the point, it ends up with the author of the book, Susan Orlean (Meryl Streep), chasing the author of the screenplay, Charlie Kaufman (Nicolas Cage), through the swamps of central Florida with a gun, intending to kill him. (That actually isn't much of a spoiler, and anybody who's going to get that worked up about the plot details of this particular movie is missing the point on a grand scale anyway.)

Now, just to be clear about this, Susan Orlean and Charlie Kaufman are real people. And the real Kaufman did indeed attempt to adapt the real Orlean's acclaimed nonfiction book "The Orchid Thief" -- based on her earlier New Yorker article -- into a film. "Adaptation" is in fact the warped, self-lacerating and giddily hilarious fruit of those labors. All clever remarks about the unstable nature of reality aside, however, it's safe to say that nothing like the swamp incident really happened. I also strongly doubt that the real Orlean carried on a steamy extramarital affair with the real John Laroche (played here by Chris Cooper), the orchid-mad redneck philosopher at the heart of her book. Or, for that matter, that the Seminole Indians know how to extract a highly addictive, mind-altering green powder from rare orchids.

So on one level -- and it's probably the main level -- "Adaptation" is just a big goof, poking fun at the deformities the moviemaking process inflicts on real life. Kaufman, played here by Cage as a sweaty, balding, compulsively shy loser battling writer's block and chronic masturbation, yearns to do justice to Orlean's elliptical narrative, which is less a story about an orchid collector than a meditation on loss, change and the nature of passion. "I don't want to cram in sex or drugs or car chases or characters having profound life lessons," he protests to a cucumber-cool studio exec (Tilda Swinton).

Yet Kaufman can't keep those things out. His desire to convey Orlean's lyrical, discursive forays into the history of plant adaptation and the esoterica of orchids leads him into a number of maniacal false starts. The film's internal chronology, already hopelessly and deliberately muddled, begins to ridicule itself. We get a flashback to "Hollywood, CA: 40 billion and 40 years earlier," depicting the formation of the earth and the origin of all life. We see a quite marvelous mini-nature film about the relationship between insects and flowers that genuinely isn't campy, as much as it may resemble something you saw in eighth-grade biology. (As in "Malkovich," Jonze and cinematographer Lance Acord stick to a grainy, naturalistic style that rarely attracts attention to its own sophistication.)

"That's it!" Kaufman tells himself in a later moment of inspiration. "That's what I need to do: tie all of history together!" (So, another flashback: "England, 139 years earlier." Charles Darwin at his desk, scribbling feverishly away.) But finally it is passion, as Orlean argues, that is the driving force in evolution and human history alike. Kaufman's own erotic fixation with Orlean's author photo (which anyone who has seen it can understand, frankly) sends him off to New York and Florida in search of her, and introduces the fatal cars, drugs, chase music and stock-footage alligators into the Elmore Leonard-esque third act of "Adaptation."

But wait, there's more. The title of this movie has an increasingly obvious double meaning: adaptation in the Hollywood sense and in the evolutionary sense. The latter kind, as the likable, loquacious Laroche (who is in some ways the hero of this story, or of part of it) observes, is "a profound process -- it means you figure out how to survive in the world." So "Adaptation" is a kind of love story about two characters -- the fictional Kaufman and the fictional Orlean -- both of them writers who feel cut off from the world by temperament and training and must figure out how to survive in it.

Their romance is not with each other, but with other people who can briefly help them escape their self-absorption. Both in the movie and in her book, Orlean is drawn to Laroche by the purity of his pursuit for the mysterious ghost orchid of the swamps. "I wanted to want something as much as people want these plants," she says/writes. "I want to know what it feels like to care about something so passionately." However much or little Meryl Streep's performance resembles the real Orlean, this is one of the chameleonic actress's most thoroughly enjoyable roles. Orlean's transition from a diffident, repressed Manhattanite, who joins dinner-party guests in mocking Laroche for his missing teeth, into a giggly hedonist willing to devote her time to precise mimicry of the telephone dial tone is wonderful to behold. If such a transformation is ultimately unstable, who can be surprised by that? (Streep also gets to utter the single nastiest line of her movie career, but you'll have to hear that one for yourself.)

Kaufman's love affair is entirely platonic; he reluctantly staggers toward a reconciliation with his twin brother, Donald, a genial suckup who is writing a screenplay about a serial killer with multiple-personality disorder and whose idea of a pickup line is "You look hot tonight, babe." (It works, too.) Once again, let's be clear: I firmly believe there is no Donald Kaufman, even though his name appears in the credits as co-writer of "Adaptation." Cage plays both brothers, who are often and in fact mostly in the same scene, which can only have been an exhausting technical and personal feat. (The special effects involved are absolutely seamless.) It also means he exposes himself to multiple forms of humiliation at almost the same time: lying on the bed pretending to jerk off (as Charlie) and wandering around the apartment (as Donald) announcing, "I really liked 'Dressed to Kill' until the third-act denooeyment."

While Charlie is locked in his room tormenting himself with Orlean's book-jacket photo, Donald is off getting laid, meeting enthusiastic agents (even their mom agrees his screenplay is "psychologically taut") and playing Boggle in the backyard with "Malkovich" star Catherine Keener, who appears briefly here along with John Cusack and Malkovich himself. But with the ambiguous help of Donald and screenwriting guru Robert McKee (another real person, played hilariously by Brian Cox), Charlie makes something like a movie finally happen. Whether that's a good thing or a bad thing is up to you.

In the end, for all its manic comedy and its "profound life lessons," "Adaptation" is a fundamentally sad work. As Charlie Kaufman says of "The Orchid Thief," it's a story about disappointment. Kaufman sets himself a challenge -- making a movie without "character arcs" and artificial transformations -- that he can't meet. For all his patented iconoclasm, he's doomed to the conventions of Hollywood as much as even the best and most unorthodox journalist (and Orlean is one of those) is doomed to those of New York. So "Adaptation" is a highly enjoyable failure, a quandary that can't resolve itself. Even in the entirely fictional movie world of its denooeyment, as Laroche puts it, "you know, bad things happen, darkness descends." No one who chases the ghost orchid ever gets out of this swamp alive.