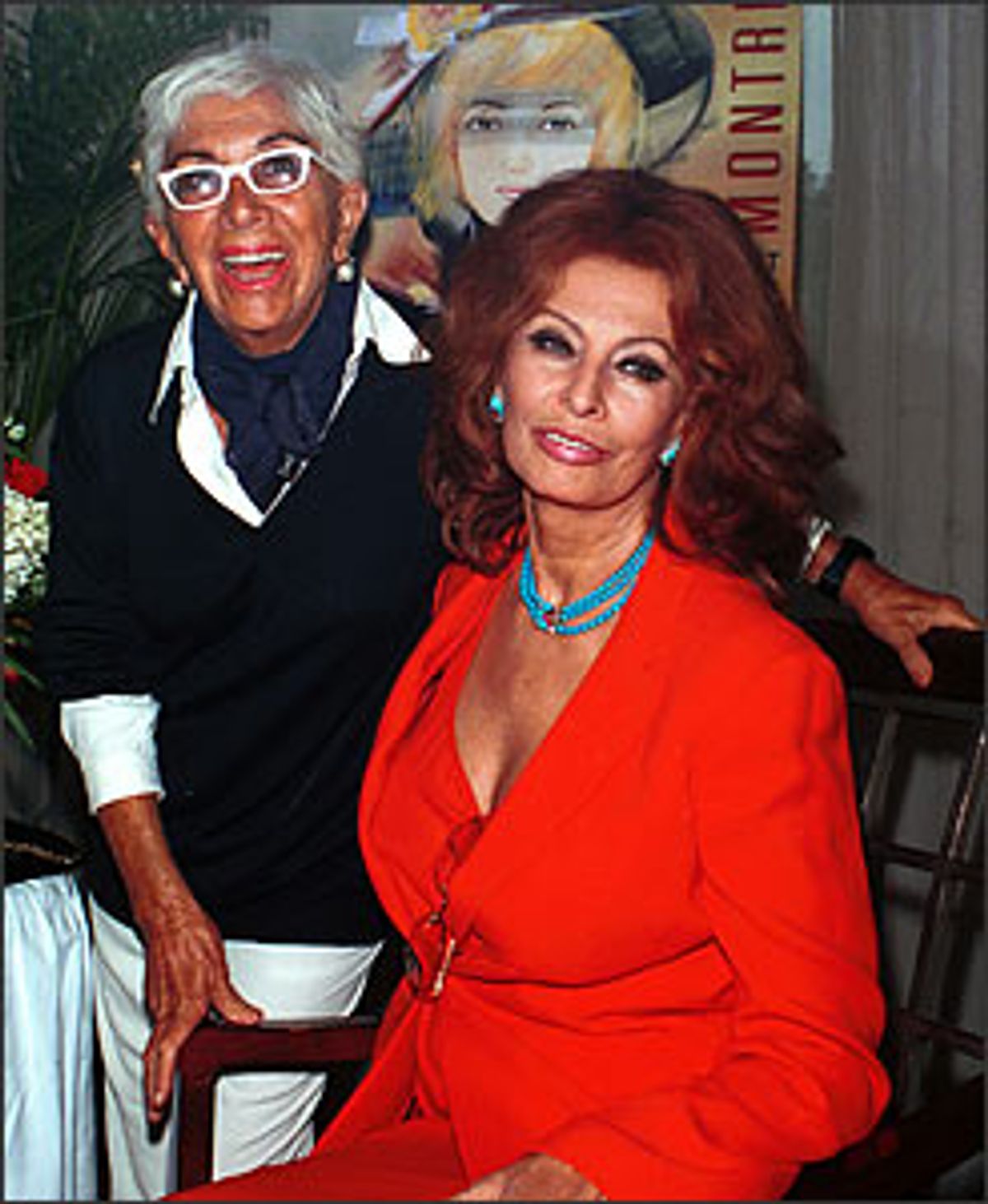 Lina Wertmüller was the first woman nominated for an Oscar as best director (for "Seven Beauties" in 1976). She is a 74-year-old firebrand whose films -- such as "Swept Away" (recently and disastrously remade by Guy Ritchie) -- have dealt bluntly and erotically with the intersection of sex and politics. But instead of being a hot commodity here, her films usually aren't even distributed in the United States.

Her latest work is no exception. "Francesca and Nunziata" stars the two most exquisite film icons still living in Italy -- Sophia Loren and Giancarlo Gianinni -- but only the audience at the New Italian Cinema series in San Francisco last month got to see it on a big screen. The rest of the cinephiles who might have the urge will have to see it in a format that is barely big enough for Loren's breasts.

The movie's quality probably isn't the issue. It's a lush 19th century costume drama (based on a novel by Maria Orsini Natale) to which Loren brings all of her maturity and depth. She plays the daughter of a pasta maker who marries a prince (played by Giancarlo Gianinni, the sexy working-class hero of "Swept Away" and one of Wertmüller's favorite male leads in her films). She continues to run the family business and a family of many children (he gives her a necklace for every child they have). The couple adopts a beautiful girl, Nunziata, who becomes the heir apparent when she exhibits a knack for numbers but whose attitude toward love causes friction between the women. Loren is brilliant as the pragmatic, passionate matriarch, Gianinni is perfect as the tired prince consort who just wants to shower his wife with pearls -- and there is a delicious love scene amid drying pasta that would make a great poster.

So why isn't that enough to sell it? In the words of a veteran film distributor and producer in New York (who spoke to me with the promise of anonymity): "Gianinni is 120 years old and Loren is 190 years old. No one cares about them."

He says that even though the fastest growing segment of the filmgoing population is over 40 and should be interested in older stars and more challenging films, "We're talking people [distributors] who have short memories. When was the last time you saw a movie with Loren? I can't imagine why anyone would buy it. It doesn't have to be as bad as 'Blair Witch' or as savvy as 'Requiem for a Dream,' but it has to have some relevance."

When this guy looks up "relevance" in his distributor's dictionary, there must be a picture of a dollar sign. The last U.S. release Loren appeared in was "Grumpier Old Men," which made $71.5 million, but the last "indie"-like film she was in was Robert Altman's "Ready to Wear" in 1994, which only made $11.2 million. (Both stats are from Exhibitor Relations, a firm that has kept domestic box office numbers since 1974.) She may be a great actress and a goddess but, hey, she's no Julia Roberts.

But it seems I'm more upset about this than the director is. When I reach Wertmüller by phone at her home in Rome and ask how she feels about the lack of distribution for this film, she reacts with something close to disinterest. Speaking in a mix of English and Italian, she tells me, "I've made 34 films and maybe 10 have been shown in America."

When I ask why diva Sophia isn't enough to attract a distributor, she gives the verbal equivalent of a shrug: "I don't know! It was on Italian television but not in the cinema. I'm sorry for that, but I make my work. I do other work." (She is producing and writing a musical theater version of her 1974 film "Love and Anarchy," as well as a film she doesn't want to talk about yet.)

Wertmüller's attitude is appropriate in a way; promotion isn't really the director's job. And the fact that American audiences won't read subtitles is our fault, not hers. Annamaria Lelli, director of the Italian Cultural Institute in San Francisco, worked on the New Italian Cinema series that presented "Francesca and Nunziata" and says that Italian films often remain unsold to American distributors -- unless they win major awards.

"The market is not for subtitles," she says. "Even Roberto Benigni, who won an Academy Award for 'Life Is Beautiful' in Italian, dubbed it in the end. Subtitles are for a certain part of filmgoers."

Even if we were willing to read at the movies, there are few companies willing to bet on that. Says Lelli, "American distributors don't want to risk. Even Miramax isn't taking a risk. We showed Francesco Rosi's movie 'The Truce' [starring John Turturro, and based on Primo Levi's autobiographical account of his liberation from the concentration camps] in Washington and Miramax bought the rights. But it was shown in New York for only two days. It's like money. They keep it in a drawer. All these beautiful films will never see the light."

Matthew Hiltzik, senior vice president for corporate communications at Miramax, is quick to point out that his company has one of the best records when it comes to releasing and acquiring foreign films. "We are committed to sharing foreign films with American audiences, but each studio makes their own decisions on the makeup of their annual release schedule." He reminded me that his studio released "Life Is Beautiful" in Italian (as well as in an English-dubbed version) and that the success of films like that, and last year's "Amélie," pave the way for more foreign films to be released in the U.S.

As for the subtitle issue, Hiltzik says, "We are releasing Roberto Benigni's "Pinocchio" on Dec. 25 and it's dubbed, yes. That's because it's for children. We will release it in Italian sometime after that in a limited number of theaters."

Wertmüller's production company in Rome, Intramovies, did try to sell "Francesca and Nunziata" around the world, though probably not to Miramax. (Hiltzik says he has heard of the film but hasn't seen it.) Intramovies' director of sales, Jeff Nuyts, says, "We showed it at several markets and sent tapes to distributors. But when a company is not interested you don't find out why. They just don't show up."

All of which is just too bad for U.S. audiences, who literally don't know what they're missing. Unless someone with power and a willingness to take risks adopts a film as a cause, it won't be seen on American movie screens. Wertmüller has obviously had to move beyond seeing this as a limitation. "At the beginning, I worked for films to come to the States," she says. "Now I prefer to work on new productions. If someone works for that [distribution] I will be happy."