Deputy Defense Secretary Wolfowitz was in San Francisco to indict Saddam Hussein. But despite growing impatience, he provided no evidence. 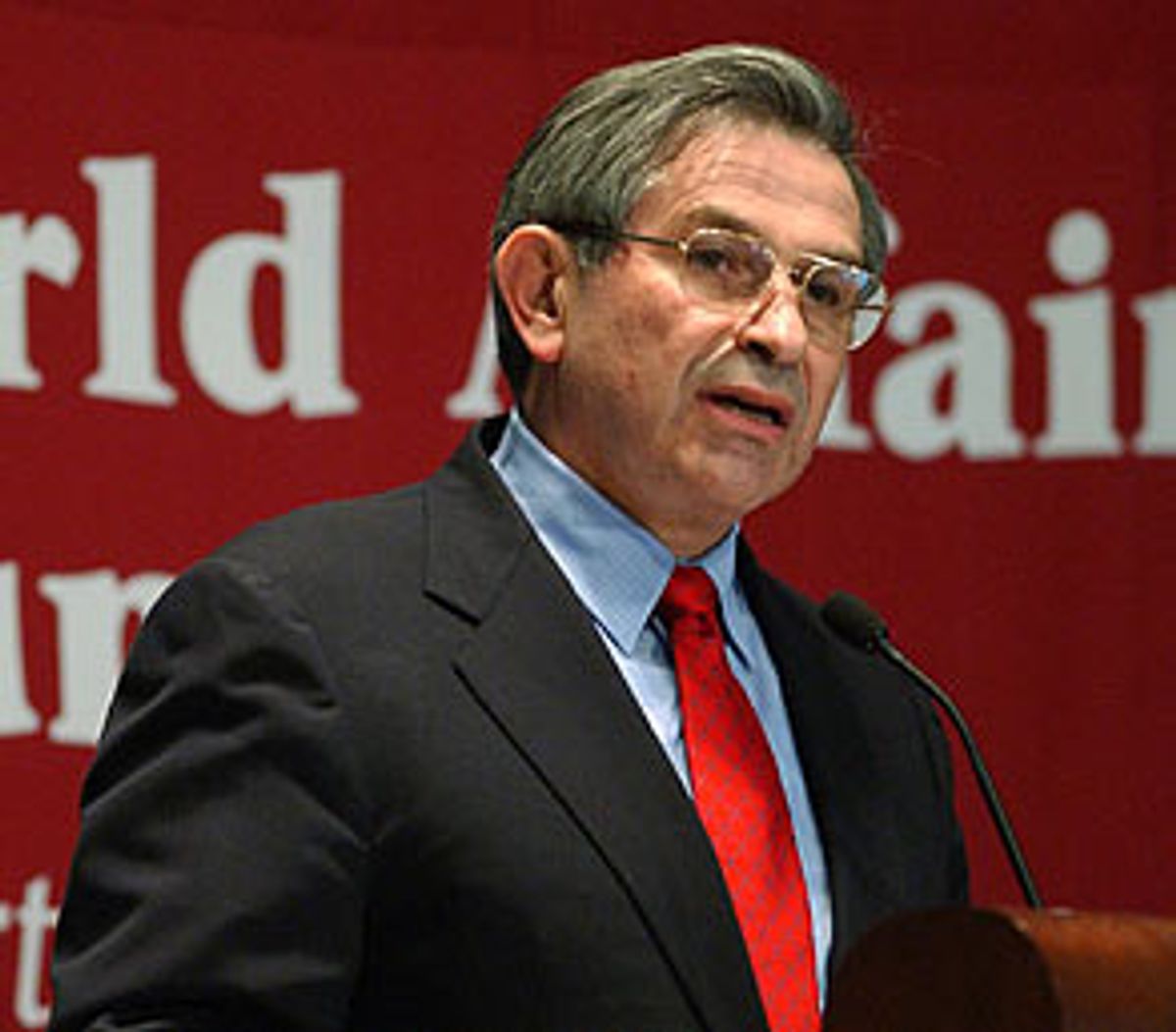 Aides to Iraqi dictator Saddam Hussein are expected to deliver the much anticipated report on their weapons program to United Nations officials Saturday, and it is no exaggeration to say that Saddam's future as the dictator of Iraq and the fate of millions of Iraqis will be determined by its contents. But as the deadline for delivery approached, top officials in the administration of President Bush made clear that, in a fundamental way, they don't care what's in the report.

They don't care because, they say, they know Saddam is guilty of developing and stockpiling weapons of mass destruction.

At an appearance Friday before the Commonwealth Club of California and the World Affairs Council of Northern California, Deputy Defense Secretary Paul Wolfowitz made explicit what has only been implicit in the administration's dealings with Saddam. Responding to a question at the end of his 30-minute speech, Wolfowitz cast the report as a devastating trap for Saddam: No matter what the report says, it will prove his guilt.

"If he flatly denies that he has weapons of mass destruction, that's good evidence [of his guilt]," Wolfowitz said. "If he comes forth with new programs that we didn't know about, that's good evidence." In other words, Saddam is guilty until proven innocent? "Yes," he said. "Until proven otherwise." Just how Saddam might prove he is not guilty remained unclear.

This week Saddam's regime issued its strongest statements yet that it has no weapons of mass destruction -- seemingly hastening the moment of confrontation with the U.S. But if the clock is ticking for Saddam, it is also ticking for the Bush administration. However much Wolfowitz and other officials insist on his guilt, their efforts to rally allied governments and world public opinion for a military takedown is at risk of failure unless the administration provides hard evidence that Saddam is guilty as charged.

Thus far, they have provided nothing of substance to prove that Saddam is holding biological, chemical or nuclear weapons. Indeed, in the absence of evidence, the Bush administration has seemed to hope at times that, by simply repeating the allegation over and over, it would become fact. On Thursday, White House spokesman Ari Fleischer was asked to detail the evidence, and he declined. "The president of the United States and the secretary of defense [Donald Rumsfeld] would not assert as plainly and bluntly as they have that Iraq has weapons of mass destruction if it was not true and if they did not have a solid basis for saying it," Fleischer explained. He said the United States would provide intelligence to U.N. inspectors.

After his speech yesterday, Wolfowitz also directly declined to offer such proof. "There's a time and a place for everything," he told reporters during a news conference that covered five questions in a little over three minutes. Yesterday was not the time and place.

It is widely assumed, of course, that Saddam has weapons of mass destruction. He has had them in the past, and he has used them with horrifying results. But Wolfowitz's appearance in San Francisco yesterday underscored that the report expected from Iraq on Saturday is, in some ways, only an exercise, a symbol that both sides will try to exploit and co-opt in a Kabuki dance of global diplomacy and power. Bush can insist on Saddam's guilt all he wants. He may be right. But if the administration and U.N. inspectors on the ground in Iraq are unable to find hard proof that Iraq is holding weapons of mass destruction, Bush will find it more difficult by far to win international support for military action against the Iraqi dictator. He could still launch a unilateral U.S. strike, but absent any evidence that Saddam has weapons of mass destruction, even domestic support might be scant.

Under the terms of the U.N. Resolution 1441, passed by the Security Council last month after an intense diplomatic campaign, Iraq has until Sunday to make "a currently accurate, full and complete declaration" of its banned weapons programs. That the U.N. was involved in the process at all was a defeat for Wolfowitz and other administration hawks who see regime change in Iraq as a crucial step in the war on terror and remaking a more stable Middle East and who feared that the international body would tie their hands. Their leverage is the provision of the resolution that warns of "serious consequences" -- war -- should Iraq fail to make full disclosure.

Iraq will deliver the report Saturday; according to a CNN account Friday, it will be 4,000 pages long, with up to 8,000 pages of supporting documentation. The document will then be subjected to an exhaustive review by U.N. and other experts, including a comparison to thousands of pages of documents and reports assembled by a previous team of U.N. inspectors before they left the country in 1998. Meanwhile, the inspections team headed by Swedish diplomat Hans Blix will be tracking leads in Iraq, using intelligence data, high-tech chemical detection equipment and basic detective work to search the nation for weapons of mass destruction.

But like Saddam's declaration, the search-and-discover mission is part of an extraordinary exercise in power politics, part poker game and part shadow play. And both Bush and Saddam will use it to achieve other ends -- to solidify their credibility, to marshal their allies, and in any way possible to put their opponent at a disadvantage.

By the most dire accounts, Saddam may have already decided that war is inevitable and is now playing for time. Delivering more than 10,000 pages of documents will tie up Western analysts for weeks, at a minimum, and until they complete their report, he can claim to have been cooperative and compliant. In the meantime, he can keep his opponents uncertain and off balance. According to a New York Times report, Saddam on Thursday offered his first reaction to the U.N. resolution, calling on top political and military leaders to bear with the process -- for now.

"Your patience, brothers and comrades, and that of the Iraqi people, is noteworthy," he said, "but your anger and revolt are also great when the situation calls for it." Other Iraqi officials have complained this week that the hard-line American approach made war almost inevitable.

By denying that he has any weapons of mass destruction, Saddam seems to be gambling that the United States does not have enough evidence to persuade the world that war is the answer.

For the tough interrogator and the sharp prosecutor, it is axiomatic that when you ask your suspect a question, you should already know the answer. Or, at any rate, the suspect should fear that you know the answer, thus making an honest answer more likely.

That is the tactical logic of the administration's present course. "We're not going to give him [Saddam] a road map in advance, telling him everything we know," Wolfowitz said Friday.

And so, instead of revealing too much to Saddam -- or to U.S. citizens and their allies -- Wolfowitz said very little during his speech and in his answers to questions from the audience and the press. Borrowing liberally from a speech he delivered in London on Monday to the International Institute for Strategic Studies, he underscored the continuing importance of NATO after the Cold War, the strength of the alliance that was building against Saddam, and the crucial role of Turkey, both as a strategic ally in the war against Iraq and as the model of an Islamic democracy.

And though he stressed that Bush wanted a peaceful settlement with Iraq, his argument suggested that the administration was only going through the motions of seeking peace, having concluded already that the only solution is military. He repeatedly warned of the risks posed by Saddam and repeatedly sought to discredit the value of the U.N. process and the new regime of weapons inspection, as if he assumed they would find little or nothing in the weeks ahead. "It is not, and cannot be, the job of the inspectors to scour every square inch of Iraq," Wolfowitz said. "That would be a task beyond their means and responsibility."

"Our only hope ... is we confront the Iraqi regime with a credible threat of force," he said at one point. "By one means or another, we will eliminate that threat," he said at another.

Wolfowitz reiterated the administration's position that the findings of the new inventory will not, in themselves, be an immediate trigger for war. They are likely to be complicated, he said, and any decision to use force will likely take the arms inspections and other matters into consideration. But, he warned: "The president of the United States has made his intentions clear  and if Saddam does not understand that, he will have made a big mistake."

The audience, and the world, have heard such arguments before, and there are growing signs of impatience with this rhetoric. Blix, too, seemed skeptical. Once the Iraqi inventory is delivered, he told the Times, "it will be the moment for those who say they have evidence to put this evidence on the table." More pointedly, a Blix deputy questioned whether allied governments were sharing all of their intelligence with the arms inspectors, suggesting that there might be an effort to undermine their efforts. Even CBS's mild-mannered commentator, Charles Osgood, wondered Friday morning whether Bush actually had any evidence.

Reporters in San Francisco had similar questions Friday, but Wolfowitz wasn't answering them. "There are issues here of protecting sources," he demurred. It remains to be seen whether he is playing from a position of strength, or only bluffing. And, if bluffing, whether the Bush administration will play the hand all the way through to war.