The U.S. government and airlines have failed to address the terrifying portable missile threat until now. Will al-Qaida's Kenya attack finally spur them into action? 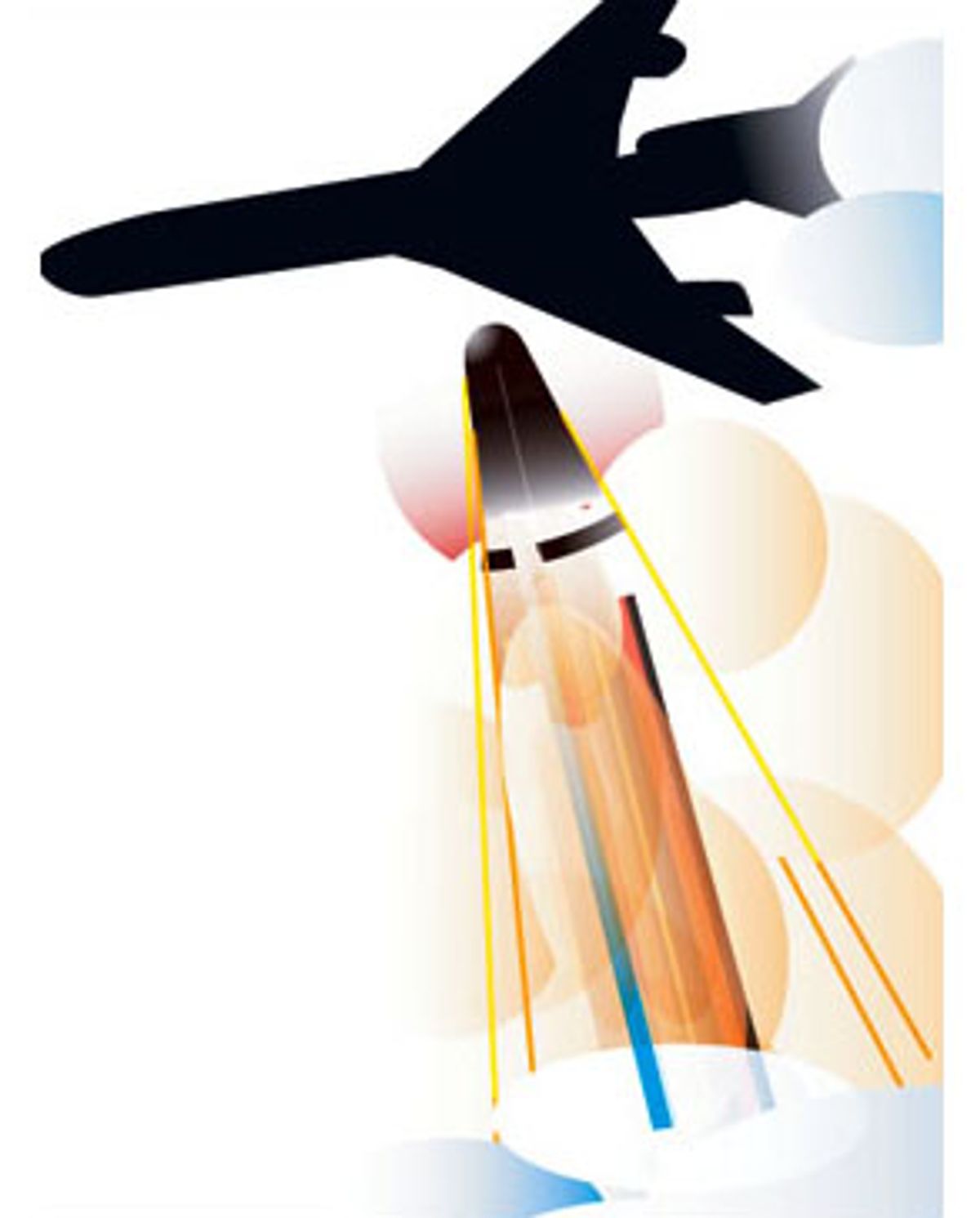 When terrorists linked to al-Qaida fired a portable missile at an Israeli jet as it took off from Mombasa, Kenya, they rocked the aviation world. Before the attack on the Tel Aviv-bound Arkia Boeing 757, few air travelers had ever considered that their plane could be blown out of the sky by a heat-seeking shoulder-launched missile, even though nearly 1,000 air passengers have perished in such attacks. Their ignorance was not shared by American officials, who have been aware of the portable missile threat for years. Until the failed attack in Africa, however, they said nothing. The reason: The government has done almost nothing to prepare for the possibility -- some experts call it a probability -- that terrorists will use shoulder-launched missiles against American commercial jetliners, either within or outside the United States. Had the government and airlines responded to this threat as it was emerging, America's air travelers would be protected by now. Instead, both government and the industry saved their money and hoped for the best. Now al-Qaida is gunning for Americans and America's fleet of jetliners is unprotected against missiles that weigh 35 pounds and can fit in the trunk of a car.

"I think we should have been worried about this years ago," says Dan Goure, a defense analyst at the Lexington Institute. "We're protecting against things that are unlikely to happen again, and what you're going to get are the new threats, such as Stinger [missiles]."

There are a multitude of methods for reducing both the susceptibility of an airliner to being hit by a shoulder-launched missile and the damage it will suffer if hit. Some of these methods are passive: They include modifying the structure of the aircraft itself by keeping flight control hydraulics and fuel systems away from locations likely to be hit; using self-sealing fuel-feed lines; hardening or shielding critical components around infrared sources such as navigation lights, air conditioner exhausts, and engines; and dispersing redundant critical components around the aircraft. Others are active: They include changes to air operations (flight approaches, altitudes, angles of descent, and so on) and the installation of active countermeasures systems to ward off an attacking missile. Air forces around the globe have used combinations of these approaches to protect their aircraft from missile attack.

In contrast to every American airline, when the portable missile threat emerged in the 1970s, Israel's El-Al airline decided that it was worth the expense of installing infrared countermeasures, or IRCM. An ICRM system includes a missile launch detector of some type, a warning system to alert the pilot to the threat, and some method of directing the missile away from the aircraft -- whether by dropping flares, or by emitting pulsing infrared sources like flashlamps or lasers, or towing an infrared decoy. Countermeasures are not 100 percent effective; advanced systems like the U.S.-made Stinger are more effective against them than older ones. (Fortunately, Stingers are far less available on the black market than older systems like the Russian-made SA-7 and SA-14.) But like a car with airbags vs. one without, one is better off with them. And El-Al remains the only airline capable of protecting its passengers from these widely distributed and easy to smuggle weapons. (The number of portable missiles not in the hands of regular armies is unknown, but is thought to be in the thousands: Hundreds of thousands have been manufactured.)

According to noted aviation security expert John Currie, American carriers failed to equip their planes with defensive devices because of the cost: "Money was the reason for inaction." The new LAIRCM system, for example, costs about $3 million, which would add 1.5 percent to the cost of a $200 million Boeing 747-400, or 5 percent to the cost of a $60 million Boeing 737. The cost of maintaining this system is also high. For cash-strapped airlines hard hit by 9/11, such costs, multiplied by the number of planes in their fleet, are significant. On the other hand, Defense Department officials say that with a larger production run the cost would come down to $1 million each, and the maintenance costs could also be reduced with additional research funding -- which has not been forthcoming. Now, in Currie's words, airlines face "the biggest nightmare we could have ever imagined." And the airlines' nightmare is also the government's: If a single commercial jetliner were shot down by a portable missile, the result could be the virtual collapse of the airline industry and a nationwide recession. For the government to pick up the tab for, say, the approximately 5,000 jetliners used would cost around $15 billion.

Just one week before the attack in Kenya, Salon reported that the government had convened a secret meeting on Nov. 5 to brief a group of airline executives on the growing threat from shoulder-launched missiles. Then came Mombasa. Days after the attack, members of Congress -- after years of silence -- were sounding the alarm and suddenly calling for action. In a letter to Bush administration officials, Sen. Hillary Clinton downplayed the idea of equipping aircraft with countermeasures systems and suggested that National Guard troops be stationed around airports.

Some experts in the field of aviation security endorse at least some limited version of her call for on-ground security forces. But all of them emphatically state that the best defense against the portable missile threat is installing infrared countermeasures on aircraft.

Wayne Black, an aviation safety consultant and former aide to Attorney General Janet Reno, acknowledges that implementing armed patrols in the area immediately surrounding airport runways is a prudent step, but insists, "The most effective method of countering the threat is installing countermeasures equipment aboard aircraft. We always recommend IRCM to our clients." Black's corporate clients have taken his advice to heart; 97 percent of them have had their aircraft equipped with infrared-countermeasures systems.

Richard Charles, an aviation expert at Georgia State University, estimates that if left to their own devices, it "would take four to five years before the airlines could install electronic countermeasures," if they could even afford them in their current shaky financial condition. Still, Charles tells Salon, "I would not want to trade money for lives."

As for armed security patrols, even if implemented only as a stopgap measure until all aircraft are protected by infrared countermeasures systems, the logistics are staggering. There are over 450 airports with commercial service in the United States; even conservative estimates indicate that it would take nearly 300,000 soldiers to provide even a basic level of protection for these airports. When asked about the prospects of implementing Clinton's perimeter patrol proposal, former FBI agent and current director of the New York State Office of Public Security James Kallstrom said, "There wouldn't be enough National Guard." The reason so many troops would be needed is that the "perimeter" is a huge area, not just the area immediately surrounding the airport. Aircraft are vulnerable along their approach and departure routes while they are as far as 50 miles from the runway and one and a half miles on either side of that route.

And some experts say that even if such vast numbers of troops were available -- which they are not as the nation prepares for a possible war in Iraq -- perimeter patrols would not stop a determined terrorist. Maj. Gen. George Harrison, USAF (Ret.) says, "Ground defense is a crazy idea ... people are groping desperately to find something that sounds productive."

"As a former U.S. Air Force Commander for Air Base Ground Defense Forces Overseas," John Curie told Salon, "I can tell you that patrols outside of the base/airport perimeter work about as well as the Border Patrol in Arizona. It is not going to work." Like many of the other experts contacted by Salon, Currie advocates putting additional resources into intelligence to help thwart attacks before they happen. Like the others, he agrees that intelligence operations are not sufficient.

Currie believes that our vulnerability to shoulder-launched missiles will only be solved when "Congress sells the American people on the cost of infrared countermeasures. The money needs to come from the government," he says, because the costs of such systems are high. He points out that "the airlines could not even pay baggage screeners adequately," forcing the Transportation Security Administration to take over that job.

In the days since the unsuccessful Mombasa attack, a number of commentators have attempted to downplay the effectiveness of the Russian-designed missiles. This is a mistake. Despite the fact that the attack in Mombasa failed, of the 18 prior shoulder-fired missile attacks that have been definitively attributed to SA-7's, 13 of these resulted in shoot-downs of the target aircraft, and the deaths of hundreds of passengers. While certainly not as technologically advanced as the American-made Stinger, the SA-7 can be deadly.

A more likely explanation for the failure at Mombasa is operator error. Although even older-generation shoulder-fired missiles are sophisticated weapons, there is a certain level of skill necessary to use one proficiently. Defense Department documents obtained by Salon detail the process for operating shoulder-launched missiles and point to any number of errors -- such as failing to take into account the position of the sun or the presence of objects absorbing or reflecting the sun's energy -- that could lead even a sophisticated Stinger missile astray.

Al-Qaida has a demonstrated history of learning from its failures. Consequently, neither the government, nor the traveling public should assume that the next group of al-Qaida operatives sent to bring down a Western jet will duplicate the errors of the minions sent to attack the Arkia aircraft. When the terrorists either improve their technique or purchase more advanced missiles on the black market, the next attack may be far more costly, both in terms of lost lives and damage to the economy, than anyone dare contemplate.