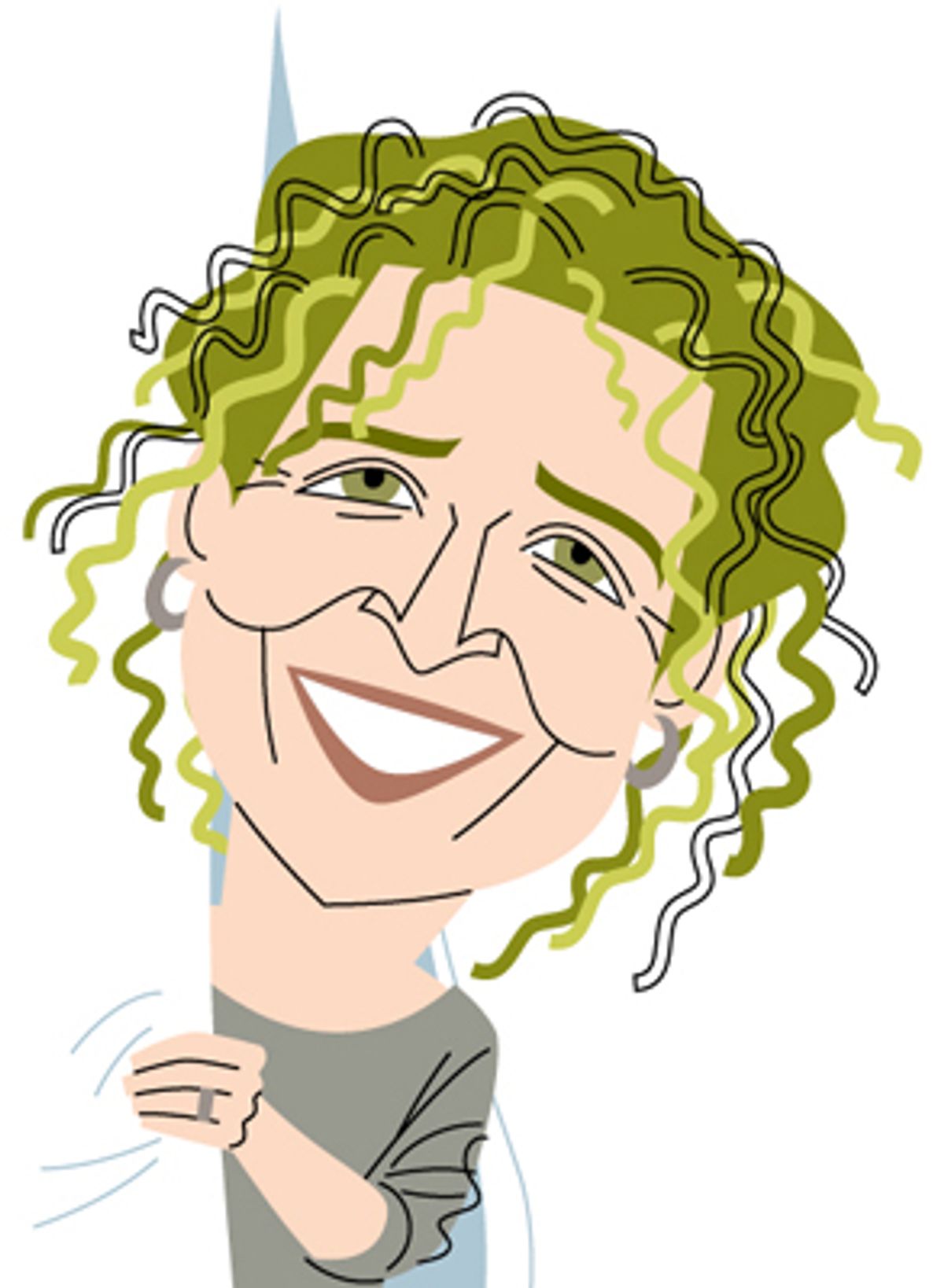 Boy, it's good to be back. You haven't seen me here much since my last column, in July of 1999. What happened was, I wrote another novel. It took two and a half years to write (and much of the material debuted here at Salon), and then nine months to get it published. People who want to get published think that publication will give them self-esteem, and peace of mind, make them feel whole and redeemed. But it's a fantasy, like thinking that marriage, or weight loss, or money will make you well. You only look forward to publication and touring the first two times. Then, even thinking about it is like anticipating periodontal work. It's like weeks and weeks of labor, waiting to see if your baby book will look like the next Alice Sebold, or a goat. My publication date was the last day of September, and I began a national book tour, for much of the five weeks before the recent election. I did readings, during which I tried to cheer people up, help them laugh and feel less alone, and trick them into buying my book. And everywhere I went, when people asked what I was going to do next, I said that I was going to write for Salon again, and do anything I could to help the Resistance.

Is there a resistance? you may well ask. Well, maybe it's not quite as organized or heroic as the French Resistance -- yet. But the plates of the Earth are shifting. Do you know a single person who supports any of this administration's policies, in any way at all? I mean, besides your relatives?

People around the country were so scared, and hungry for hope, and for some reason I seem to have a lot of it, most of the time. If I can get through these times with my crabby sense of humor and blundering grace, you probably can too. If we survived one George Bush, we can survive them all. I have hope because the peace march here was so huge, and because Nancy Pelosi is terrific. And somehow, Kissinger's appointment to head the investigation into 9/11 is so hilarious that it has given me a new lease on life. You really gotta love the guy. How many of us could have kept our cool if our boss referred to us as "the Jew," as in, "Haldeman, get the Jew on the phone." How many of us could have lived in this country so long, and still sound so convincingly like Boris Karloff?

So I shared this hope of mine everywhere I went. Hope is costly, as Augustine said, but not as costly as giving up. And I learned once again that almost anything is worth doing, as long you get to end up back at home.

My tour began in New York City, with a radio interview for a huge audience. I waited through the introduction like a dog about to play catch. "Well!" the host asked finally. "Writing takes a lot of creativity, doesn't it."

"Yes!" I replied enthusiastically. "Quite a lot! How true!"

The next day I did an interview for an important NYC literary radio station that I had longed to be on. The host said he had read "Bird by Bird" and "Operating Instructions" a dozen times each, but he must have read the versions where they took out all the references to my sobriety. Because there I was, in my golden retriever eagerness to please, with a man who, right off the bat, offered me a Scotch. "Oh, no thanks," I said nicely, and then reminded him that I'd quit in 1986. "Sorry, sorry," he said, but at the end of the show, on air, he offered me tranquilizers as an enticement to be on his show again. "Valium!" he enthused. "Or Xanax. Or both!" And then he closed the show by announcing, "You are a delightful little creature."

I was in New York for four or five days, and waited to see if I would get reviewed by the Times. This is my ninth book and I have never gotten a daily review in the Times -- not that I am bitter. Nope, nope, nothing could be further from the truth. It's just that I secretly believe that if Michiko Kakutani likes your work, it means you are a real writer, and you will be happy and and wealthy and stable forever. The one little problem with Michiko, though, is that if she doesn't like your book, she will kill you -- cut your head off with a surgical knife, and play hacky-sack with it until she grows bored. Then, maybe in the last paragraph, she'll pour acid on it.

So that's definitely a downside.

But there's a book in front of me opened to the page where it says, "There is One who has all power," and it does not mention Michiko Kakutani. Honest -- I'm looking right at it. But it can sure feel like she does. She's like the great and glorious Wizard of Oz, and most writers feel terrorized by her. It does not seem to bring them solace when I remind them that she is going to get a bad seat in heaven. She will probably have to sit in the Mean People's Room, with Paul Wolfowitz, and Ann Coulter, and they'll mostly have to live on aerosol cheese products and lavender Necco wafers.

I had recently read three of Kakutani's brilliant, ugly attacks on three writers I love -- Zadie Smith, Tim O'Brien and John Updike. Listen, I'm not a psychiatrist, but I'm beginning to wonder if she may have tiny sadism issues. So, actually, wanting her to review you is like hoping that Wolfowitz will ask you out on a date. But I waited, and wonderful things happened for my book, and I waited, and waited. I composed little ditties like, "Michiko, you bitchiko, you make us all so twitchiko." And when I never got the daily review, I knew I had dodged a bullet, but I also felt hurt and hysterical, like Christopher Guest in "Waiting for Guffman," screaming into the phone, "I hate you, and I hate your ass face."

Finally I got a Sunday Book Review piece that I loved and I felt great. Then a friend said it was sort of a mixed review, and I got depressed. Then another friend said it was a terrific review. Then I got some really sickening treatment on a radio show, and I felt like Snaggletooth doing Shakespeare onstage. Up, down, up, down, until finally I remembered what a priest friend said: "It is exhausting to stay at this level of mental illness. One needs a lot of rest. We're on your side." It helped. I rested, overate, called my friends.

I was in Colorado when I made the New York Times Bestseller List, and my best friend, Martin Cruz Smith, who wrote a great novel called "December Sixth," was on it that same day. We called each other from our media escorts' cars, 2,000 miles apart; and I can honestly say this was the happiest moment of my tour. Then, a bad review arrived, and the jungle drums started beating again. But luckily, in Colorado, I had something else to worry about: a drowning fish in my hotel room.

It was a nice hotel except that someone had decorated my room with a dying goldfish in a fishbowl. It swam frantically around the bowl, opening and closing its mouth, its eyes bugging out as if it had a grape stuck in its throat. It never stopped circling, gasping, all but clutching at its throat. Sometimes it got trapped in the plastic vines. It was a nightmare. At first I referred to it in numerous telephone calls as "the poor little guy." By dinner the first night, I called him "that fucking fish." I kept hoping it would die, so I could pour it down the toilet. I thought about flushing it, alive. They shoot horses, don't they?

Eventually I got to go out and do a reading. I love readings and my readers, but the din of voices of the audience gives me stage fright, and the din of voices inside whisper that I am a fraud, and that the jig is up. Surely someone will rise up from the audience and say out loud that not only am I not funny and helpful, but I'm annoying, and a phony. Or they will show a video, of me at home, alone, in the bathroom. The whistle is always waiting to be blown, and in some ways, it gets me to do better work. But onstage with a hundred people watching, it causes me to swing back and forth between self-abasement and megalomania. It's usually supersonic, like a dog whistle -- but in a crowd, other dogs might hear.

Being on a book tour is like being on the seesaw when you're a little kid. The excitement is in having someone to play with, and in rising up in the air, but then you're at the mercy of those holding you down, and if it's your older brother, or Paul Wolfowitz, they leap up, so that you crash down and get hurt. And if it's you holding you down, teasing you, and withholding, and leaping up, well, where are you going to find any connection and safety?

I usually find it back at the hotel, where there's room service and climate control, which almost makes up for no kid, no boyfriend, no cat. And no puttering, which is as close as I get to yoga. The only things you can look for in a hotel are things you probably left behind. But this time I had to return to the drowning fish. It was still tearing around the bowl when I got back, searching for a crumb, gasping for air. I finally called housekeeping.

"I'm very worried about my fish," I said. There was a long pause. "I think he's hungry. Would it be possible to send some fish flakes up?"

But the fish people had gone home for the night, and I was too embarrassed to ask for someone to come get the fish. I called a friend. I told him about the fish, and I started crying, and I finally realized that there were two beings in the room, and one of us was just fine.

So I did what you can do to help life fill in the holes: I put on my jammies, ordered crème brulée, arranged my reading material, took a lot of notes, realized how funny it was going to seem someday, and called a friend.

And the next day I got to come home. Home was a fascinating series of counterbalances - back with my family and friends, but blindsided by the election; grounded by the yoga of puttering, and terrorized by the impending war. I didn't know quite what to do with myself at first. Then I remembered what I had told those people who kept asking what I was going to do next: I was going to work for the Resistance, and do a column at Salon; flex the muscles of my hope and neuroses, and walk through it again.