Fox's absurd-yet-true office comedy "Andy Richter Controls the Universe" makes other sitcoms look as if they're die-stamped by robots. (Which they are.) 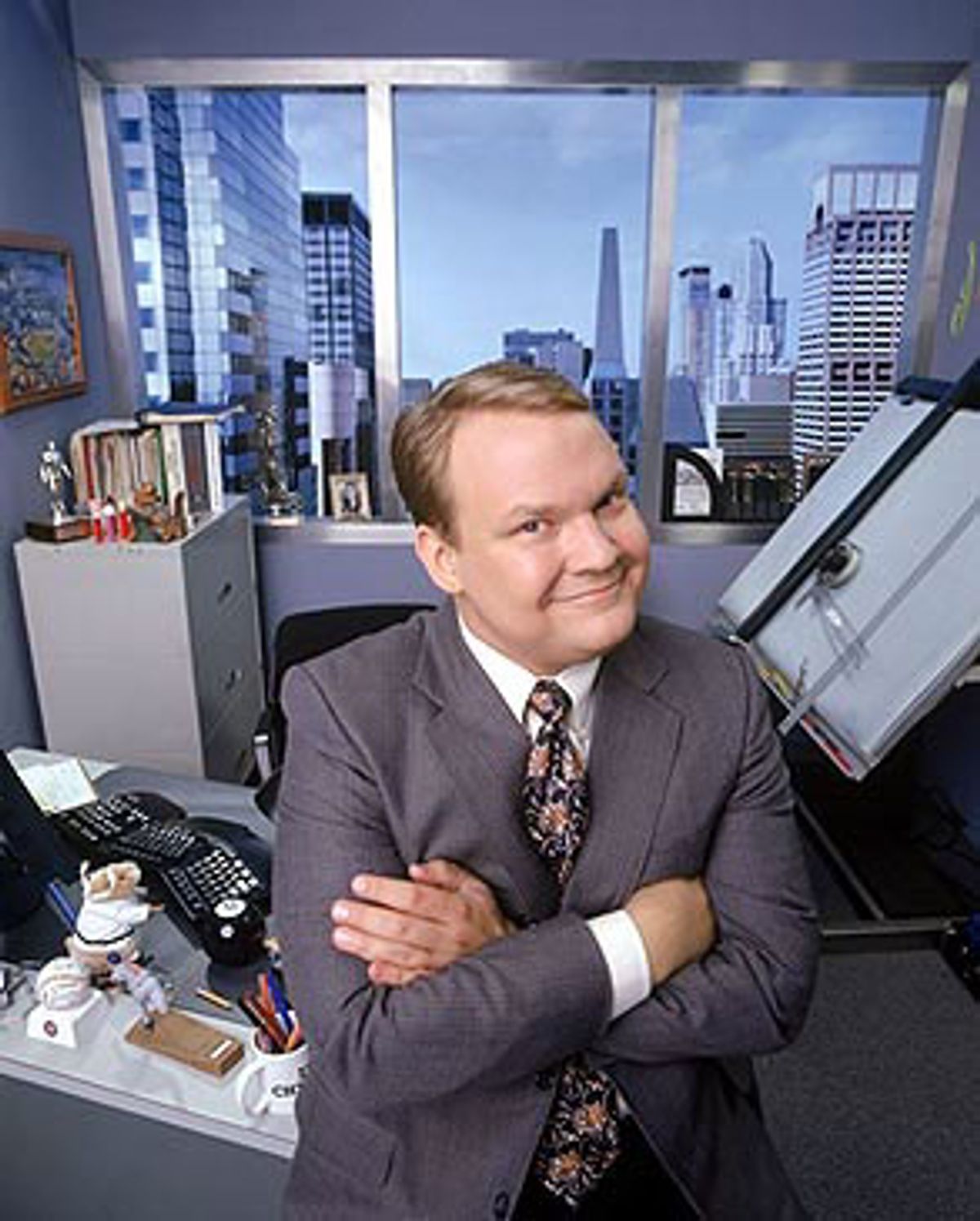 "Andy Richter Controls the Universe," which airs Tuesdays at 8:30 p.m. on Fox, is an absurdist office comedy about a doughy technical writer named Andy (Andy Richter) who works for a huge Chicago conglomerate called Pickering Industries. Andy spends most of his time at the office, which means he actually spends most of his time in his head, rescuing all the colorless moments that make up the better part of his life from the yawning pit of workaday meaninglessness.

His fantasy life is no less pedestrian that his regular life. If anything, it's almost more so. Most of Andy's thoughts -- which run along the lines of "And then, we were all replaced by a breed of genetically engineered superdogs," or "I wish I'd said that. I'm such a jerk. And I'm 30 pounds overweight" -- are heavily influenced by dumb movies and routine self-loathing. The result is absurdly hilarious.

It's hard to fathom why Fox waited until last week to introduce "Andy Richter Controls the Universe" into its lineup. "Midseason replacement" doesn't exactly have the clang of a ringing endorsement to it. Then again, it's hard to fathom why most sitcoms aren't even remotely funny by comparison. Maybe the sitcom universe is actually some kind of opposite land, where the jokes are meant to be predictable and the very special moments are a laugh riot. Maybe all the programming executives have been replaced by remote-controlled robots. Maybe tests have shown that people don't want to laugh out loud during prime time and risk dislodging little bits of Stouffer's frozen dinner from their mouths and send them flying across the room.

If you ask me, "Andy Richter Controls the Universe" is the only office comedy ever that really gets office humor; office humor being that giddy, loopy, unabashedly stupid humor that comes from a place of exhaustion, boredom and bottomless despair. Offices are rarely conveniently staffed with a Whitman's Sampler of dysfunctional personalities -- the narcissist, the bimbo, the buffoon. And even if they are, nobody stands around their workplace wittily putting each other down; they stand around their workplace with insincere smiles plastered across their faces dreaming up creative ways to smite each other.

Nobody who has ever sat through a three-hour meeting has done so without a well-developed coping strategy. For example, meetings go by a lot faster if you imagine the person sitting next to you suddenly ripped off their clothes, jumped on the conference table and belted out "Over the Rainbow." That's the beauty of having a job. Your body is trapped, but your mind is free to soar.

In the season's first episode, Andy's boss Jessica (the marvelously deadpan Paget Brewster) tells him and his colleagues that the company is offering a finder's fee of $3,000 to anyone who helps recruit a nonwhite technical writer to the firm. "A few days later we met in Jessica's office to help a nonwhite person, who, traditionally, we wouldn't have cared about," Andy explains.

Andy's co-workers, Keith (James Patrick Stuart), Wendy (Irene Molloy) and Byron (Jonathan Slavin), each make the case for their candidate. "Ted has five years experience," Andy says, "and he's been black his whole life, which has not been easy in this racist society."

"Well," says Wendy, "my candidate is a woman from Saudi Arabia. She watched as her mother was stoned to death for driving a car -- a bumper car."

After listening to everybody's pitch, Jessica decides to go with Wendy's candidate over Byron's blind white guy and Keith's "gay, one-armed, Native American little person" who, unfortunately, is not a technical writer. Then she takes the opportunity to add, "Guys, I just want to say that race is a very uncomfortable subject, but only by talking about it like we've been doing, have we proven -- just how uncomfortable it really is."

The experience turns sour when Andy makes a few cracks about the Irish in front of Ted, who is black but proud of his Gaelic heritage. Ted complains to Jessica, who defends Andy against accusations of racism, then fails to see the problem when she realizes he wasn't talking about African-Americans. A black human resources person has a similar reaction, and soon Andy, Jessica and the human resources manager wind up in sensitivity training, where a man standing at the front of the room greets them with the following: "Jews are cheap. Blacks are lazy. Asians can't drive. Puerto Ricans steal."

"Wow," Andy thinks. "It was a powerful way to get our attention. Pointing out all the horrible, hurtful, stupid stereotypes. This guy was good."

He does seem good, until another man walks in and says, "Good afternoon, everyone. I'm Mr. Stevens, your instructor." He turns to the man at the front of the room. "Who are you?"

"Hey, Duane Farley. My guinea boss told me I have to take this seminar."

In this week's episode, Andy figured out that the perfect man he has found for Jessica is actually a set of identical twins (whom she later describes as "Talky" and "Humpy") that are sharing her behind her back. Byron hires a prostitute to change the dressing on his wound because private nurses are too expensive. But that's not really all that happens.

Actually, it doesn't really matter much what happens. "Andy Richter Controls the Universe" understands how secondary plot is in sitcoms, and takes full advantage of the loophole. The show could never be accused of being realistic, but it is oddly true to life. Nothing ever really happens in the big picture, but it's the awkward moments, the dark ironies and the little, imaginary things that keep life interesting.

And unlike most sitcoms, "Andy Richter" knows how to deliver a message in a way that doesn't make you want to spray the set with bullets. Here's one: "All I know is, I hate racists," the glum Byron tells Andy after he returns from sensitivity training feeling a little too sensitive about race. "I hate everything about them; their music, their food, their so-called religion. The way their men are so skinny and their wives are so fat. But mostly, I hate the way they judge people based on tired stereotypes."