A small Irish movie dramatizes a real-life court case about separating children from their parents. (And it stars James Bond.) 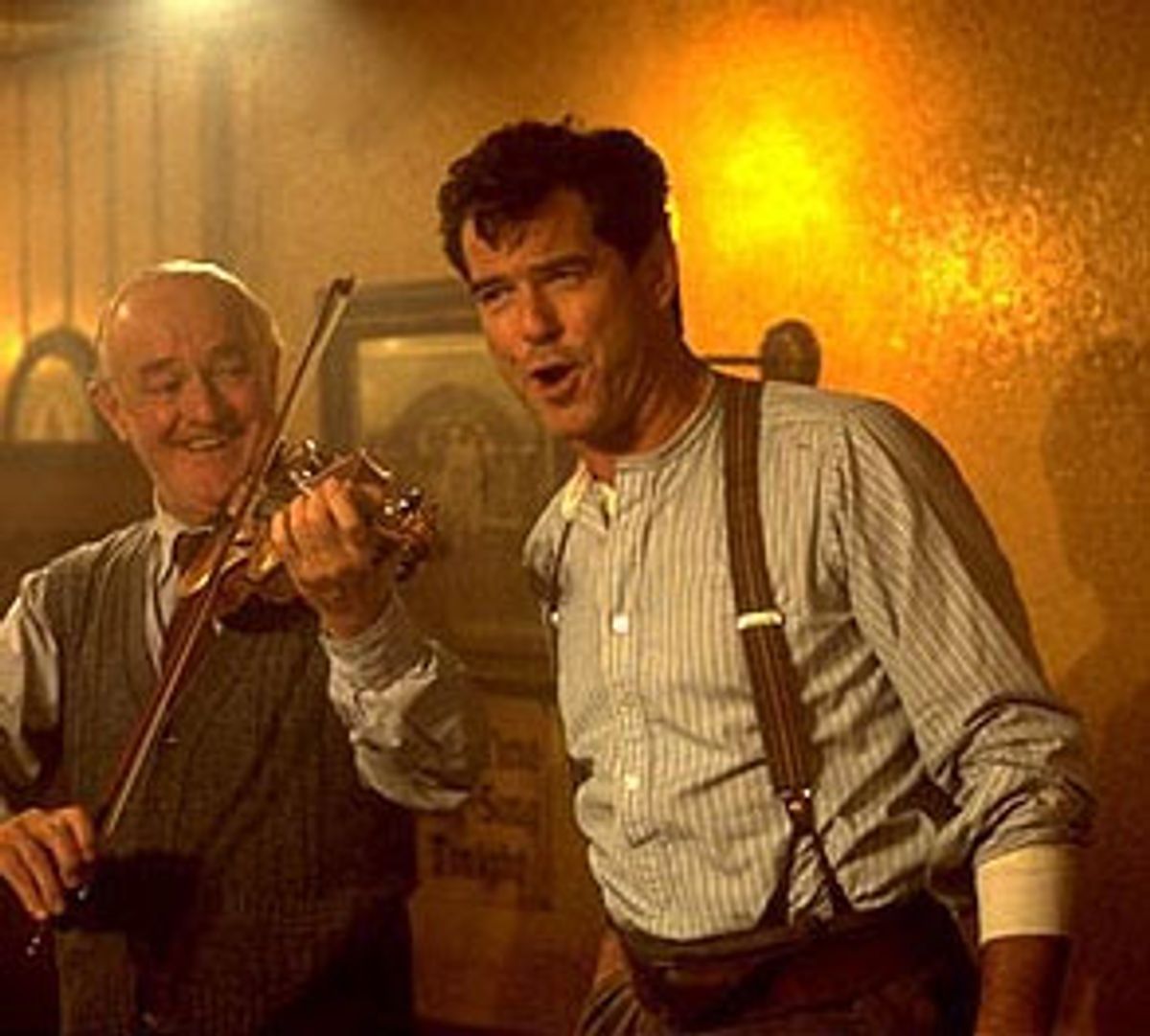 There are several wonderful actors in Bruce Beresford's "Evelyn" (Alan Bates, Aidan Quinn) and one particularly hardworking performer who carries his role off valiantly (Pierce Brosnan). But "Evelyn," a small, sweet movie set in Ireland in the early '50s and based on a true story, is just too slight to amount to much. Brosnan plays Desmond Doyle, a mostly unemployed painter and contractor who's shattered when his wife suddenly leaves him. Declaring him an unfit father, the Irish courts take away his three children, Evelyn (Sophie Vavasseur), Maurice (Hugh McDongagh) and Dermot (Niall Beagan), making them wards of the Catholic Church. Worse yet, the kids are split up: The boys are sent to a school for boys (about which we learn nothing), and Evelyn is sent to a strict Catholic school, where she's left to the mercy of one kindly nun and one evil, abusive one.

Doyle will do anything to get his children back, but it's a tough row to hoe when you've got both the Irish courts and the Catholic Church against you. "Evelyn" divides its time between Doyle's dogged fight for his children and the wretched experiences of brave little Evelyn at the hands of that ghastly nun. (The boys figure so dimly into the plot that you almost forget they exist -- they're like semi-invisible elves in miniature tweeds and brogans.) Evelyn, as she's played by Vavasseur, is potentially a dreadfully charming little moppet, and Beresford seems to have directed her carefully -- she never quite crosses over the line to being too cute. Still, you wish you could cut some of the sugar when she takes the witness stand and, at the request of one of the judges, precociously recites the prayer she says every night, something about blessing all her enemies (who really don't know any better) and the whole of Ireland as well.

"Evelyn" is something of a political movie -- in real life, Doyle's case changed Irish law in regard to the court's right to separate children from their parents -- but it's not a particularly fiery one. Beresford isn't above employing a touch of the "Sophie's Choice" method of filmmaking now and then: You feel something for Doyle as his children are literally wrenched from his arms by authorities and hastened into a vehicle that speeds away, their muffled cries trailing off in the distance. But Beresford is pushing it further than perhaps he should. And there's just no forgiving him, or screenwriter Paul Pender, for the beaming corniness of one of the movie's recurring motifs: Evelyn refers to the shards of sunshine that shoot through trees, clouds and other obstacles as "angel rays," and just a little bit of them goes a long way.

But say what you want about Beresford: There's no telling what he'll cook up next, which is why it's always dangerous to ignore a Beresford movie. (Sometimes I can hardly believe that the same man made movies as disparate as "Double Jeopardy," "Black Robe" and "Driving Miss Daisy.") "Evelyn" may be one of Beresford's less distinguished pictures, but it does have some nice touches, particularly the pub scenes, which feel brushed with a breezy warmth. Quinn, as the American lawyer whom Desmond befriends (and who's also his main rival for the movie's female love interest, played improbably but serviceably by Julianna Margulies), doesn't have much to do, but is charmingly raffish, as usual. Bates, as a retired barrister who's enlisted to help Desmond in his fight, gets the best lines in the movie, particularly when he's providing a disparaging running commentary about the bewigged old goats serving on the Irish supreme court.

And Brosnan, whom most of us think of only as James Bond, really attempts to give the character of Doyle some warmth and humor; he's a bit stiff at times, but it's easy enough to buy him as a man who genuinely loves his children and would do anything for them. "Evelyn" may be a weightless picture, but it's hardly torture to sit through. Just watch out for those angel rays.