A whole Lott of trouble

Sen. Trent Lott apologized again for his racially insensitive remarks, but even some conservatives called for him to step aside as the next majority leader. 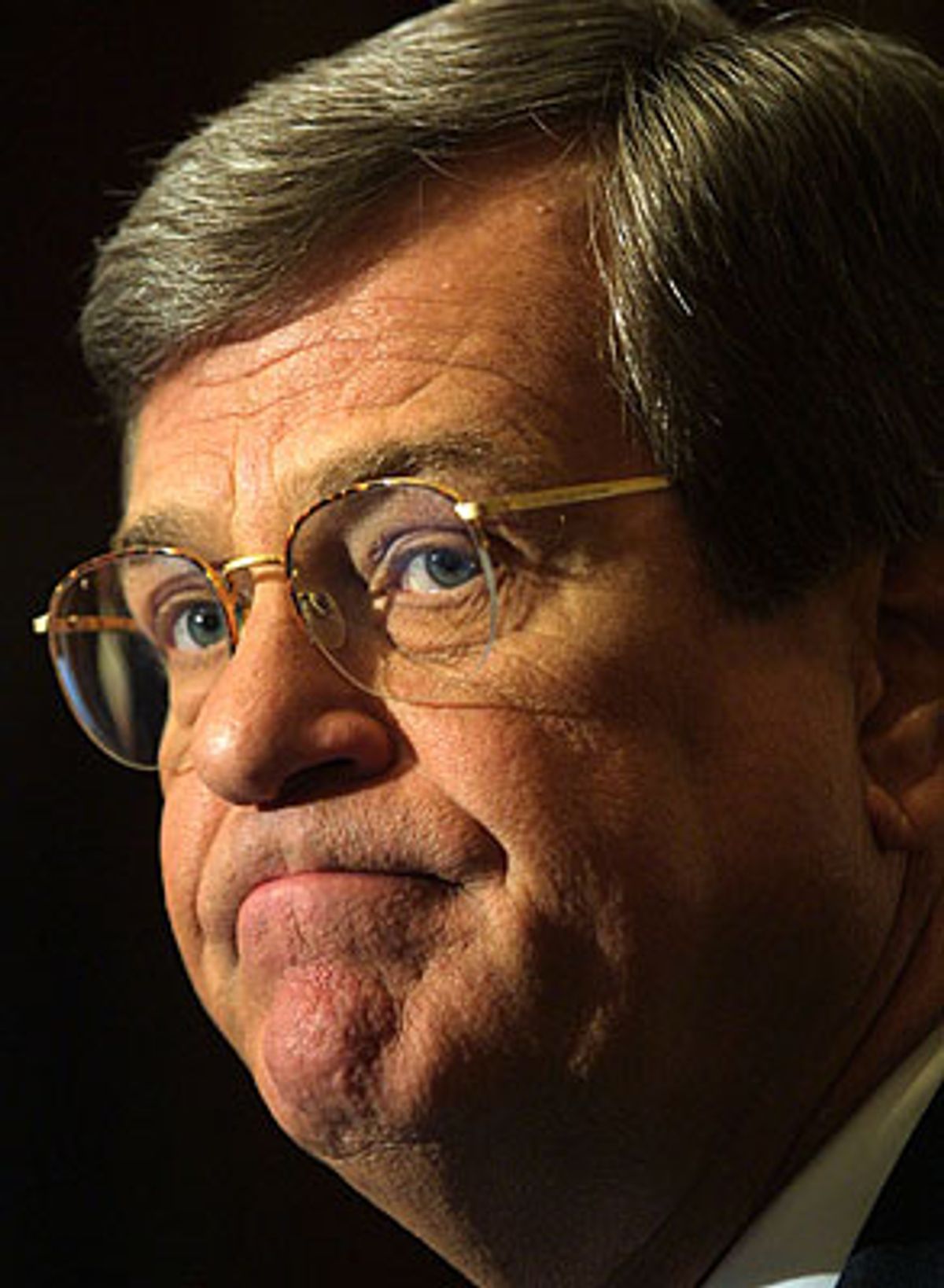 After several days of near silence, some of the nation's top Democrats Wednesday demanded that Republican Trent Lott step aside as the Senate's incoming majority leader in waiting, saying that his remarks at Sen. Strom Thurmond's birthday celebration last week were so racially insensitive that he is unfit for the post.

Lott blitzed the airwaves, expanding and amplifying his earlier apology, and though he insisted that he would not step aside as majority leader, it was unclear whether he would survive the controversy. Several new revelations showed that Lott had made similar remarks in past years that seemed to be thinly veiled regrets that the days of racial segregation were over. Even some Republicans who had supported him earlier this week fell silent, a clear indication that the Mississippi senator is, at least for the moment, politically toxic.

"I wanted to honor Strom Thurmond, the man, who was turning 100 years old. He certainly has been a legend in the Senate both in terms of his service and the length of his service," Lott said on conservative Sean Hannity's syndicated radio show Wednesday. "It was certainly not intended to endorse his segregationist policies that he might have been advocating or was advocating 54 years ago. But obviously, I am sorry for my words, they were poorly chosen and insensitive and I regret the way it has been interpreted. This was a mistake of the head, not of the heart because I don't accept those policies of the past at all."

Wednesday night, on CNN's "Larry King Live" show, Lott seemed to say that he was too young to understand the segregationist nature of Thurmond's 1948 campaign. "I was 7 years old when, you know, Strom first ran for president," Lott said. "I don't really remember anything about the campaign." He said that nobody in his caucus, and nobody from the White House, has suggested he step aside.

Earlier Wednesday, Sen. John Kerry, a Massachusetts Democrat and 2004 presidential contender, became the first member of the Senate to suggest Lott was now unfit to lead the upper chamber. "It saddens me greatly to suggest this, but in the interests of the Senate, his party, and the nation, I believe Trent Lott should step aside as majority leader," Kerry said. "I simply do not believe the country can today afford to have someone who has made these statements again and again be the leader of the United States Senate."

The latest troubles for the Mississippi Republican began after Thurmond's bash, where he told the crowd the United States "wouldn't have had all these problems over all these years" if it had followed Mississippi's lead and backed Thurmond's 1948 bid for the presidency. There was just one problem: Thurmond ran that year as a segregationist. Lott issued an apology Tuesday, saying: "A poor choice of words conveyed to some the impression that I embrace the discarded policies of the past. Nothing could be further from the truth."

Meanwhile, details of Lott's history on race issues continued to unfold Wednesday. Salon contributor and blogger Joshua Micah Marshall uncovered a friend-of-the-court brief Lott filed on behalf of Bob Jones University in 1981, after the university was stripped of its tax-exempt status for practicing racial discrimination.

It was also revealed Wednesday that Lott's statements last week were nearly identical to ones made 22 years ago at a rally for presidential candidate Ronald Reagan, where Thurmond was present. "You know, if we had elected this man 30 years ago, we wouldn't be in the mess we are today," Lott said of Thurmond then. Lott explained to Hannity today that those comments were a reference to Thurmond's support for a strong national defense.

After the Hannity interview, Al Gore, who has been among Lott's most vocal critics this week, again blasted the Mississippi senator, and formally called on Senate Republicans to choose a new leader.

"It is simply not credible to state that Thurmond's campaign in 1948 makes him think about national defense. It was a campaign based on segregation," Gore said. "My guess is that the uneasiness many Republicans are feeling about Lott becoming majority leader will become more pronounced in the wake of this interview. If they act in the best interest of our country and their party, they will select someone else."

Gore was not the only one turning up the heat Wednesday. But however strong the attacks on Lott, they were too little and too late for some Democratic activists. Donna Brazile, executive director of the Democratic National Committee's Voting Rights Institute, said many members of her party have been timid in criticizing Lott and now feel it is safe to do so only after Republican voices have joined in the chorus.

"On all of these subjects, we wait to see what the reaction is from the conservatives," she complained. "That's what's wrong with our party: Before we come out with out positions, we have to wait and see what the other party is doing. "

In many cases, conservative critics of Lott have been out in front of Democrats in calling on Lott to step aside. New York Post columnist Robert George criticized Lott for a record "unmatched by any other current leading Republican of paying homage to a romanticized view of the old South." That record includes a 1984 speech to the Sons of Confederate Veterans in Biloxi, Miss., where Lott proclaimed "the spirit of [Southern Civil War leader] Jefferson Davis lives in the 1984 Republican platform" and Lott's history of speeches to the Council of Conservative Citizens, the successor to the segregationist White Citizens' Councils of the 1960s. In a 1992 speech, Lott told a group of council members: "The people in this room stand for the right principles and the right philosophy."

Among the conservatives calling for Lott's resignation was Salon contributor Andrew Sullivan. "The Republican Party has a simple choice," he wrote on his weblog. "Either they get rid of Lott as majority leader, or they should come out formally as a party that regrets desegregation and civil rights for African-Americans."

George called for the promotion of Sen. Bill Frist, R-Tenn., to replace Lott. Calls to Frist's office were not returned Wednesday.

Sen. Minority Leader Tom Daschle, D-S.D., who took criticism from members of his party for being to soft on Lott Monday, came out with a new statement Wednesday calling on Lott to "come forward with a fuller explanation and apology. The question Sen. Lott needs to answer is: If he did not mean to endorse segregation, what did he mean?"

Other Democratic leaders who had been silent up to now, including Sen. Joe Lieberman, D-Conn., and Democratic National Committee Chairman Terry McAuliffe, joined the chorus of Lott critics. And leading Democrats broadened their attack Wednesday, demanding that President Bush also condemn Lott's statements.

But the White House was anything but eager to entangle itself in Lott's political problems, at least in public. "The president, as I said yesterday, understands and knows that America is a much richer and better nation as a result of the changes that have been made to our society involving integration and the improvement of relations between races," said White House spokesman Ari Fleischer. "The changes made in the civil rights community have been among the most constructive changes that our society has experienced."

But when asked whether Bush would denounce Lott's comments as requested by Daschle, Fleischer deflected the question.

Senate Republican sources say that some members of the caucus are concerned that Lott's elevation to leader could hurt the image of the party. But as of Wednesday afternoon, no Republican senators had publicly called on Lott to step aside. On the contrary, some, like Sen. Arlen Spector, R-Penn., who has been mentioned as one of the most dissatisfied GOP senators and a potential party switcher, came out strongly in support of Lott.

"I know Trent Lott very well from working with him in the Senate for the last 14 years and can vouch for the fact that he is no supporter of Senator Thurmond's 1948 platform," Specter said. "His comment was an inadvertent slip and his apology should end the discussion."

Sen. John McCain, R-Ariz., refused to comment about Lott Wednesday. But on "Larry King Live" Monday, McCain said, "I've known Trent Lott for over 20 years and I know he doesn't hold any segregationist views and he clearly did not mean words like that in that fashion."

But as the story grew Wednesday, and reporters began digging up new pieces of information about Lott's past, McCain, like other Senate Republicans, was silent.