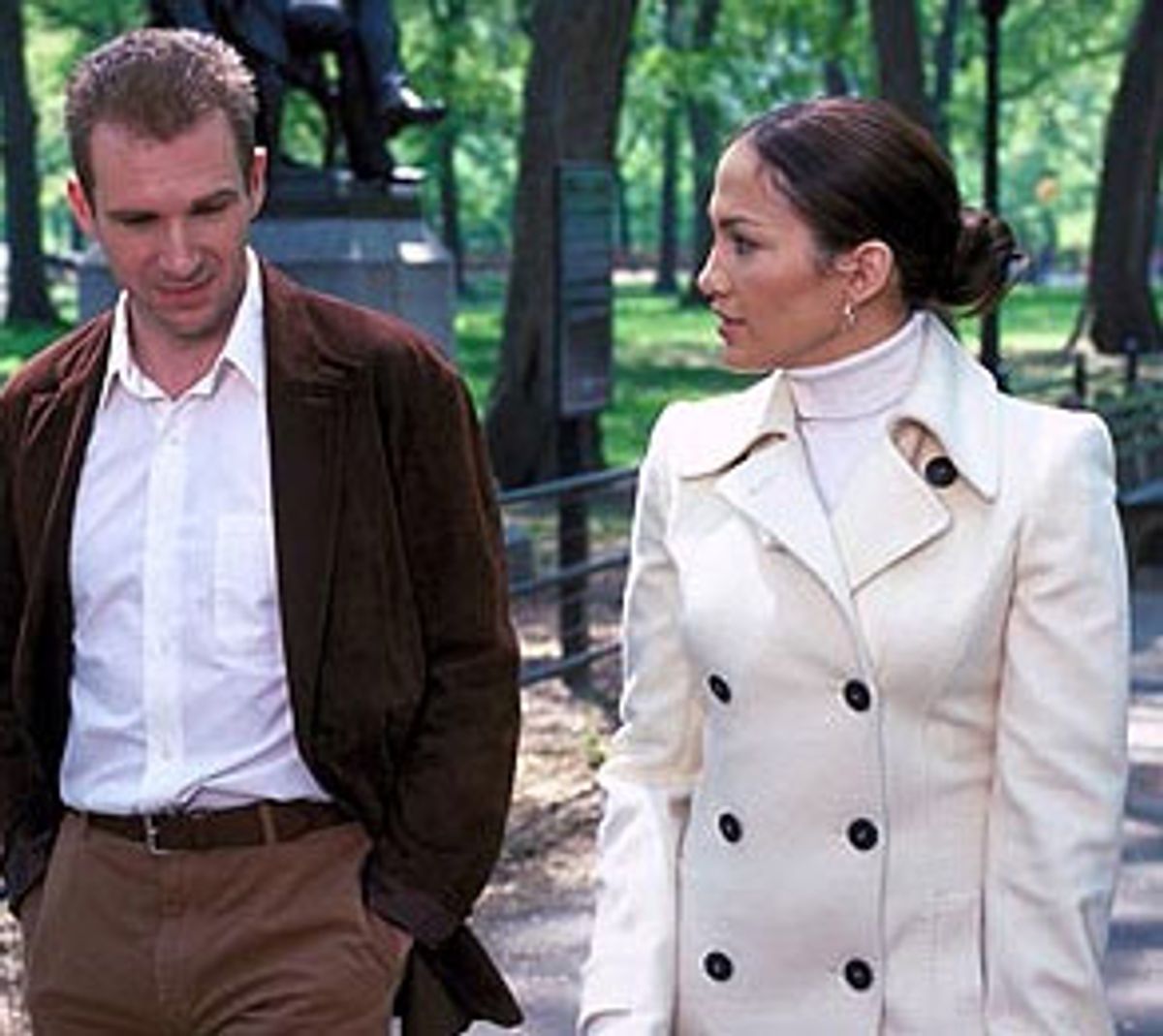 Jennifer Lopez may be the most overexposed and underused actress in Hollywood today: Overexposed because you can't pick up a gossip magazine or flip on the television without picking up some useless bit of gossip about her personal life or her wardrobe; and underused because no director except Steven Soderbergh has found the right way to tap her appeal, which is certainly genuine. For all her exceptional beauty, Lopez easily comes off as a real person onscreen, mixing vulnerability and confident self-awareness in all the right proportions.

But then, the world is full of young actresses who could do good work in the right light comedy -- if only there were directors capable of making a good light comedy these days. With "Maid in Manhattan," Wayne Wang is just the latest in a long line of contemporary filmmakers who have proved they're not up to the task. You can predict almost every turn in "Maid in Manhattan," although that's not the problem with it. It just never takes wing. There are a few casual, funny lines in Kevin Wade's script, but they're buried under too many sodden ones. Everything about it, except the valiantly lifelike Lopez, feels stiff and robotic and mindlessly crowd-pleasing, as if it were a comedy made by a committee instead of a human being.

It should have been easy to make "Maid in Manhattan" work, particularly considering that rags-to-riches Cinderella stories are so universally compelling. Lopez plays Marisa Ventura, a chambermaid at a fancy New York hotel. She's also a single mother raising a precocious young son, Ty (Tyler Garcia Posey), who seems to have a nose for politics even at the tender age of 10. (He delivers, and flubs, a speech on Richard Nixon at his school, and takes more interest in books about Henry Kissinger than in Gameboys.)

Hanging around the hotel while his mother goes about the business of changing sheets and putting mints on pillows, Ty befriends the allegedly handsome and affable Christopher Marshall (Ralph Fiennes), an aspiring senator who is also a highly eligible bachelor. Somehow, Marisa and Ty end up going for a jaunt in Central Park with Christopher; Marisa happens to be wearing a white wool Dolce & Gabbana suit borrowed on the sly from spoiled-and-snooty hotel guest Caroline Lane (a way overdone Natasha Richardson), so Christopher has no idea what class stratum she really belongs to. Still, he falls in love with Marisa for herself -- although that suit, molded cunningly around her considerable assets, probably doesn't hurt.

There are the usual obstacles (it turns out that Caroline is after Christopher too) and the typical second bananas (Stanley Tucci is Christopher's straitlaced handler; Marrissa Patrone is Marisa's friend, a fellow maid who's obsessed with penis size, a gag that's stupefyingly unfunny even the first time she pulls it). There's also a subplot about Marisa's desire to advance in the workplace and become a manager -- a goal that's of course threatened by her dalliance with one of the hotel's guests (not to mention that Central Park jaunt in the borrowed designer gear, an offense that's marginally defensible in the universe of romantic comedies but would be a complete no-no in real life).

"Maid in Manhattan" is bounteous with good intentions. There's much made of the fact that Christopher and Marisa come from "different worlds," although only once does Marisa speak of Christopher as white, privileged and fortunate. To his credit, Wang realizes clearly that color and social class themselves aren't the crucial issues that divide Marisa and Christopher. The bigger problem is that they have such disparate ways of looking at the world, partly, of course, because of where they came from but also simply because of who they are. And Christopher is a Republican, no less -- although he's not a real Republican, but the sort who might actually set foot in a housing project to find out how people live there, instead of just to have his picture taken.

But Marisa and Christopher have much bigger problems than disparate lifestyles. To put it bluntly: Marisa is hot; Christopher is about as erotic as a wet woolen sock. What on earth was Wang thinking, casting Fiennes as a romantic-comedy lead? I'm not a fan of stiff-upper-lip acting as a rule, which makes it doubly hard for me to respond to Fiennes' stiff-no-lip performances. (For my money, his brother Joseph is the real actor in the family.) But in "Maid in Manhattan," Fiennes' clammy gormlessness comes off as something he just can't help: He's all wrong for the role and the movie, and it's painful to see him working so honorably to attempt something he's so ill-suited for.

And unfortunately, Lopez's feather-light charm only heightens the contrast. For one thing, she's fetching even in her dowdy maid's uniform. But there's more to Lopez than bodacious good looks. It doesn't matter that in reality she's a huge celebrity. Lopez's charm as an actress is exactly the opposite of star quality. What's remarkable about her is the persistence of her dewy, girl-on-the-street hopefulness. There are beautiful young women who look as if they believe the world is going to be handed to them, and those who have no idea what's in store but wonder if maybe it will be something good. In this movie, as in Soderbergh's "Out of Sight," Lopez comes off as the latter.

But Wang doesn't know quite what to do with her. Her scenes with Fiennes are serviceable but feel vaguely off, as if she too were wondering what on earth he's doing in this movie. She fares better in her moments with Bob Hoskins, who's wonderful (as usual) in a too-small supporting role as a hotel butler. But even though she's completely right for her role here, she never seems quite at home in it. She's a real-live girl trapped in a movie treatment -- when all she really needs is a movie.