The newest, most outspoken critics of the war on terrorism and Iraq are conservatives. 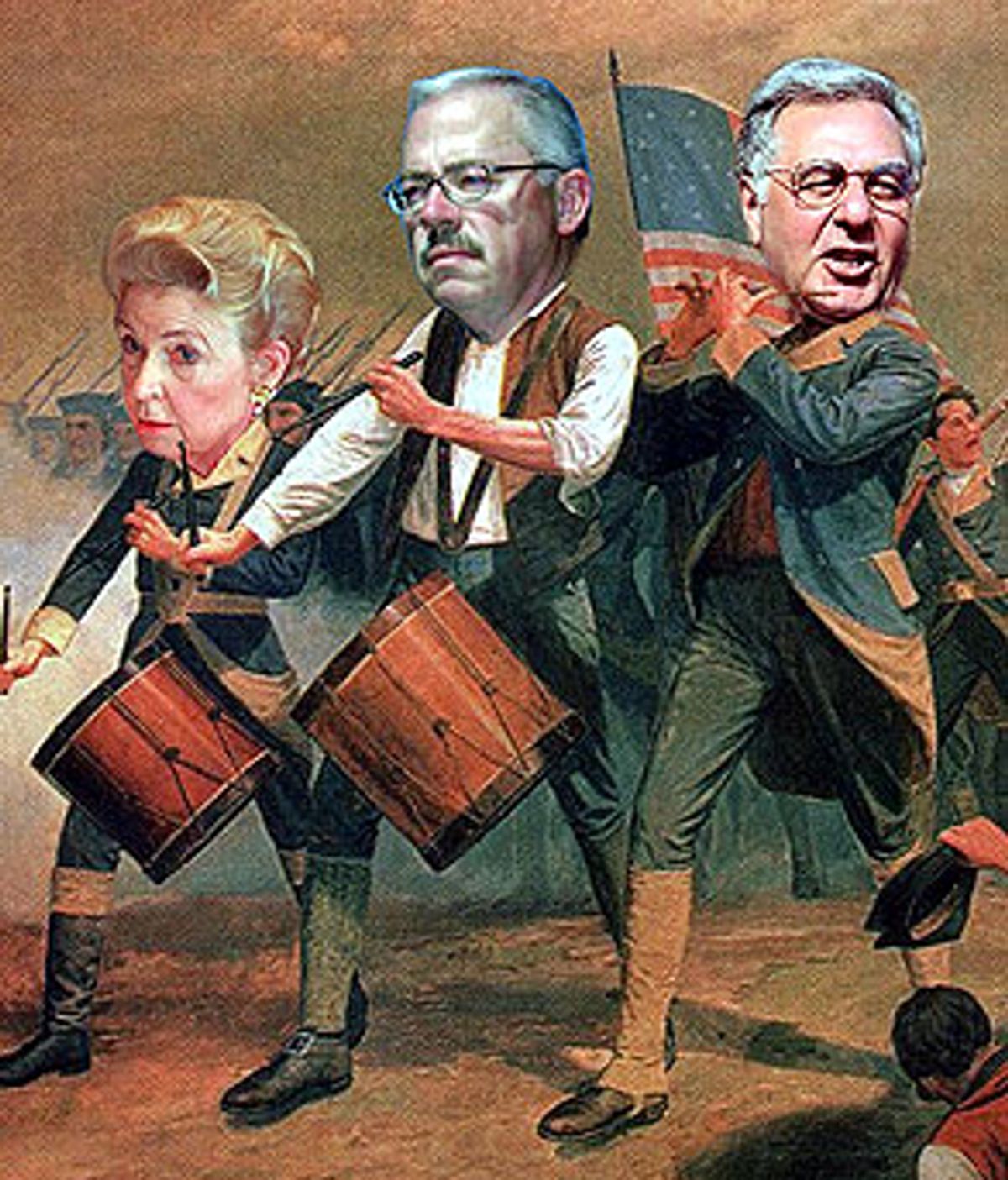 Chuck Baldwin, a radio host in Pensacola, Fla., is as right-wing as they come. He's the chairman of the state chapter of the Moral Majority and the founder and pastor of Pensacola's Crossroad Baptist church, where his guest speakers have included Jerry Falwell and Patrick Buchanan. His Web site features a waving Confederate flag, pictures of a "memorial to aborted babies," and rants about Bill Clinton's murder of Vince Foster.

But he's no Bush supporter either. In fact, as he wrote in a widely Web-circulated Nov. 26 essay, the "Bush administration seems determined to turn our country into the most elaborate and sophisticated police state ever devised."

As the Bush White House faces a predictable chorus of left-wing critics complaining about increasing encroachments into civil liberties in the name of fighting terror, it has also begun to hear from more and more conservatives saying the same thing.

The ACLU expects former Rep. Bob Barr -- the Georgia Republican who was a driving force behind the Clinton impeachment -- to join the group as a consultant on privacy issues, and it's negotiating with Rep. Dick Armey (R-Texas) to do the same. Phyllis Schlafly, the Eagle Forum founder and ERA opponent, worries that some Pentagon programs are leading us toward the "Big Brother government as imagined by George Orwell." Lisa Dean, director of the center for technology policy at right-wing Republican activist Paul Weyrich's Free Congress Foundation, describes Bush's expansion of domestic surveillance programs as "antithetical to everything we stand for." New York Times hawk William Safire has made similar points in his column, warning, "This is not some far-out Orwellian scenario. It is what will happen to your personal freedom in the next few weeks if John Poindexter" -- the Iran-contra operative who now heads the Defense Department's Information Awareness Office -- "gets the unprecedented power he seeks."

The dramatic political realignments among the left occasioned by Sept. 11 have been well documented. Schisms have opened among erstwhile comrades over the proper response of what commentator Christopher Hitchens calls "Islamo-facism" -- and over our culpability in fomenting it in the first place. Below the liberal radar, through, similar shake-ups are happening on the right. Though plenty of people on the right have always been authoritarian cultural conservatives, there's also been a strong libertarian strain in the conservative movement. Now, conservative libertarian principles -- chiefly small government and individual liberty -- are clashing with a triumphant right-wing radicalism eager to exercise American power and make the world anew.

Half a century ago, in the inaugural edition of the right-wing National Review, William F. Buckley wrote that it was the duty of conservatives to "stand athwart history and yell 'Stop!'" Now the Weekly Standard -- the must-read barometer for Bush foreign policy -- crows, "The Left wallows in cynicism, while the Right is full of starry-eyed dreamers." This right wing, run by neoconservative ex-'60s radicals, is the chief engine of a new kind of radicalism in America. The administration is seizing unprecedented powers in its righteous war against terrorism. The radicalism of the right -- its overarching vision of a changed world -- may be why some left defectors like Hitchens seem to feel more comfortable among them than among liberal defenders of the status quo.

But it's also why some old-school conservatives, dedicated by definition to defending the status quo, suddenly appear to be alienated.

Philip Gold, a former Georgetown professor who campaigned for Barry Goldwater, worked on Steve Forbes' presidential run, and has written for publications like the Weekly Standard and the American Spectator, finds the new direction of the conservative movement so disturbing that he's pulled a Hitchens. He recently resigned from his job as a senior fellow in National Security Affairs at Seattle's conservative Discovery Institute because of his opposition to the war with Iraq, and bid farewell to the right in general in a Seattle Weekly article called, natch, "Goodbye to All That."

"Over the last several years," he wrote, "I've become sadly convinced that American conservatism has grown, for lack of a better word, malign." The movement he's devoted his life to, he writes, "has gained the government, trashed its soul, and now bestrides the planet."

"We no longer have a commitment to limited government," he says. "I no longer recognize the movement. What I started out with isn't there anymore. The fact that mainstream conservatives are going along with [Total Information Awareness] and with TIPS indicates that these principles are no longer resonant in the movement."

The reason? "Power corrupts," he writes. "It corrupts especially when you've got it, but can't seem to accomplish what you set out to do, and you've jettisoned your ideals somewhere along the way but can't quite face the fact."

To conservatives like Gold, the Bush administration has betrayed its principles by expanding the federal bureaucracy and authorizing vast new domestic surveillance programs. If big government spying programs are going to be defeated, such conservatives are going to play a major role. After all, it was Armey who finally ensured the death of TIPS, the proposed Justice Department program that would have recruited mail carriers, meter readers and other workers with access to private homes to act as government informants. Armey added language to the Homeland Security Bill specifically outlawing both TIPS and a national I.D. card. "The leadership of Congressman Armey was very important," says Barry Steinhardt, director of the ACLU's technology and liberty program. "Elements of the conservative movement and of the Republican party have held to their principles of limited government."

Right now, the one issue uniting civil libertarians on the left and right is Total Information Awareness, a Pentagon program being run by Poindexter that aims to create a centralized grand database of Americans' credit card purchases, medical histories, education records and other information. Through mining such data, the government hopes to discern patterns that will help catch terrorists. The problem, of course, is that to do so the government has to gather and sift through private information on millions of innocent citizens.

For liberals, such programs recall hated government spying operations like COINTELPRO, under which the FBI infiltrated and attempted to sabotage the civil rights movements of the '60s and early '70s. But conservatives have their own nightmares of federal power run amok -- especially after the events at Ruby Ridge and Waco, where federal agents killed religious fundamentalists who tried to live outside government's prying eyes. For them, Total Information Awareness raises the specter of Washington bureaucrats poring over their gun records, examining their church affiliations, and meddling in the lives of people who want only to be left alone.

"We don't want the government to monitor our daily activities," says Schlafly. "Technology is moving so fast. When they're able to combine our medical records, travel records, education records, gun purchases, credit card records, this is total information that I don't think the government should have about law-abiding citizens if we value freedom."

Of course, after Sept. 11 many Americans are quite willing to trade some freedoms for increased security. Yet this bargain, says Dean, is a betrayal of her brand of conservatism. "I never thought I'd see conservatives running to the government to solve problems like they do now. That's just not conservatism to me," she says. "People look at Homeland Security, the USA PATRIOT Act, national I.D. cards and say, if that protects us, we'll go ahead. I never would have thought I'd hear conservatives say that," she says.

Had Clinton been president, she says, conservatives would have "pulled together and fought" these initiatives, even after 9/11. She says the fact that many are complacent in the face of Bush's incursions is a matter of personality, not principle. "Conservatives trust Bush. They think he wouldn't do anything to harm them, that everything he's doing is for a noble cause," she says. Dean worries that such personal affinity blinds her ideological brethren to the massive structural changes taking place in government. "The groundwork we're laying now, we're laying for the next administration and one after that and one after that. At the same time, we're raising a generation of citizens on the belief that it's OK to give up all of our liberties in exchange for security. That's un-American."

In other words, mainstream conservatives favored limiting government powers when they didn't run the government. For example, as a senator, John Ashcroft was a consistent defender of privacy rights when he felt Clinton was trampling them.

"Both Ashcroft and President Bush have departed from their earlier emphasis on protecting privacy and have really become statists, who want to impose the power of the state on us to surveil us and also to prevent any dissent," says the ACLU's Steinhardt. "They're certainly not conservatives when it comes to wielding the powers of the state."

In fact, says Steinhardt, the real conservatives are now  the ACLU. "We think of ourselves as the most conservative organization in America," he says. "We're dedicated to preserving the values of an 18th century document."

Of course, this kind of rhetoric is nothing new coming from liberal civil libertarians. What is new is how many conservatives have come to agree. Asked who is standing in the way of government assault on civil rights, Baldwin names only one group -- the ACLU. He talks fondly of forming alliances with liberals to stand up to Bush and Ashcroft. "The door is wide open for something like that," he says. "Left and right can disagree on several issues, but the one issue we should all be concerned about is the preeminent issue of freedom."