The GOP needs to do a lot more than rebuke Trent Lott to make up for its legacy of pandering to white bigots and suppressing the black vote. 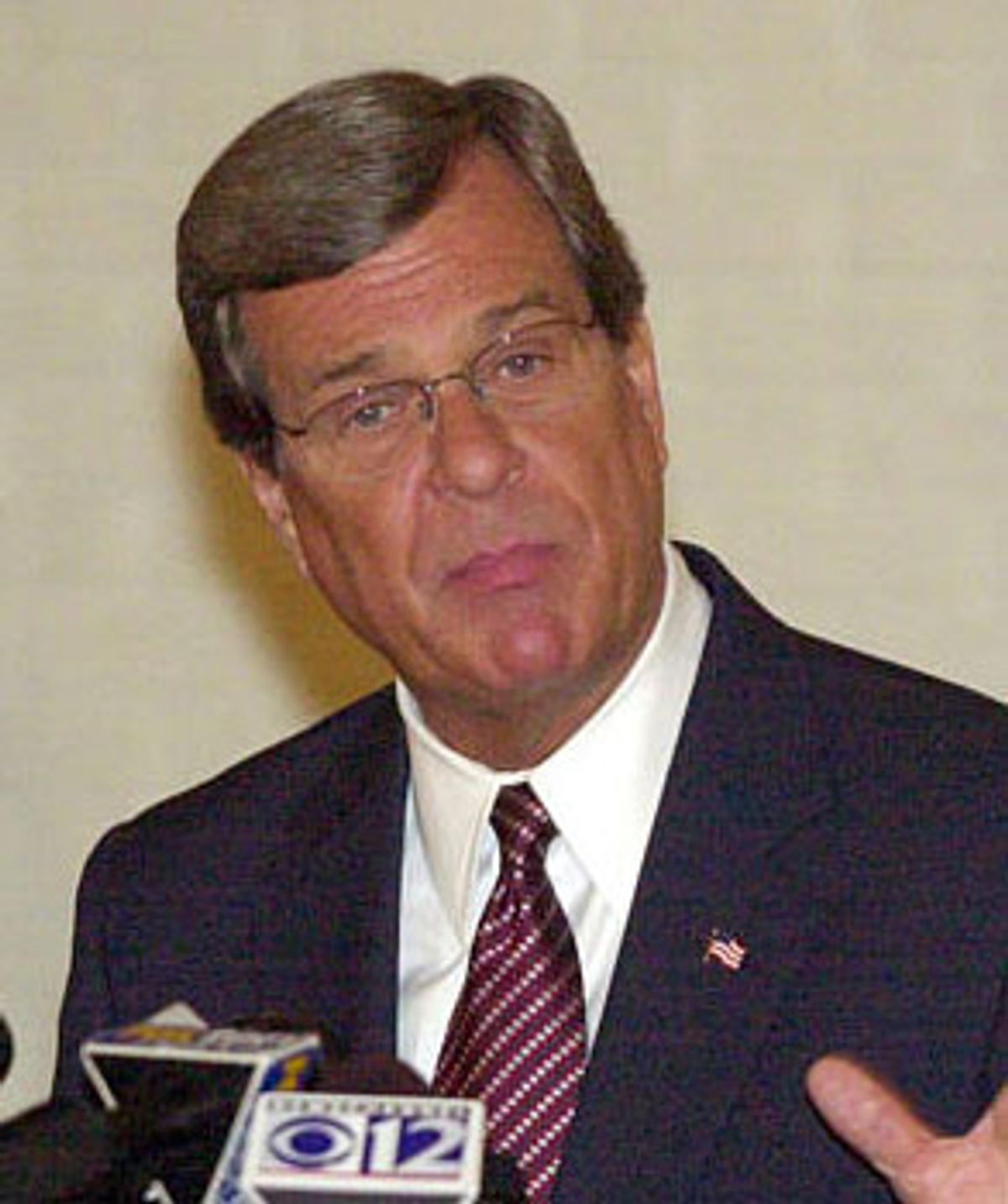 How could the Senate Majority Leader have known that his words of praise for Strom Thurmond's 1948 segregationist presidential campaign -- "We voted for him. We're proud of it. And if the rest of the country had of followed our lead we wouldn't have had all these problems over all these years" -- could possibly cost him his job? After all, Lott's been saying the same sorts of things for decades now, and on the rare occasion that they even make news, he's always escaped the same way: Insisting he wasn't endorsing racism even as he praised racist institutions, from Thurmond's Dixiecrat Party to Bob Jones University to myriad pro-Confederacy groups the Mississippi right-winger has allied himself with his entire career.

Four years ago, for instance, when Lott's long association with the Council of Conservative Citizens made headlines during President Clinton's impeachment trial, he insisted he had "no firsthand knowledge" of the group's well-known racist views. He got away with it even though his favorite uncle, who sat on the group's executive board, told the New York Times: "Trent is an honorary member. He's spoken at meetings." And even though the group's crackpot racism -- its opposition to interracial marriage, its admiration for French fascist Jean-Marie LePen, its attacks on Martin Luther King and Abraham Lincoln -- was available for the world to see on its Web site, which also featured a political column by none other than Trent Lott.

That time around, though, there was no rebuke from other Republican leaders, no New York Times editorial demanding he step down. The Times' editorialists were too consumed with bashing Clinton, presumably, and in fact most news organizations played the flap in the context of the impeachment battle. (It was Clinton defender Alan Dershowitz who was responsible for publicizing Lott's association with the Council, along with that of another leading Clinton critic, Rep. Bob Barr of Georgia.) For a while the story played out as a kind of "he said, she said" gotcha game, as though the two men's well-documented racist affiliations were mud being flung at them by desperate Clinton defenders. Unbelievably, Barr and Lott walked away unscathed.

That won't happen this time. Lott may survive as majority leader -- he issued his fourth apology Friday, calling segregation "wrong and immoral," and seems determined to tough it out -- but he'll be forever shadowed by this episode. (And he may be forced to walk the plank if the issue doesn't die.) But while the nation is sitting through its history lesson, however belatedly, let's make clear what this flap is really about. The Republican Party has prospered for almost 40 years by doing exactly what Lott did at Thurmond's 100th birthday party last week: Quietly appeasing its retrograde Southern base with coded symbols of solidarity, while disavowing overt racism for a national audience. Richard Nixon's "Southern strategy" -- rebuild the party by luring whites repelled by the Democrats' pro-civil rights stance -- didn't die with his presidency. And Lott's not the only one using it today.

Although President Bush rebuked the majority leader for his latest remarks and demanded a more convincing apology, Bush has played the game too. He never apologized for his visit to Bob Jones University during the 2000 campaign, despite its long history as a bastion for segregationists, anti-Semites and Catholic-haters, and its ban on interracial dating. And unlike Sen. John McCain, he never apologized for his refusal to criticize pro-Confederate groups that were protesting South Carolina Gov. Jim Hodges' decision to move the Confederate flag from the Statehouse dome. Nor did anyone at the White House complain when Republican candidates in South Carolina and Georgia used the flag issue last month to beat Hodges and Georgia Gov. Roy Barnes. In fact, Bush ally Ralph Reed, the Christian Coalition leader turned Georgia GOP chair, was the force behind the state party's huge success last month, which was widely attributed to an unexpectedly high turnout by white, rural voters, and a dampened turnout among blacks.

And Bush has never disavowed the other key part of the GOP's current Southern strategy: the party's systematic support for efforts to dampen and discourage black voter turnout, mostly but not exclusively in the South. Gone are the days of the poll tax and the literacy test; now the GOP uses "ballot security measures" and voter-fraud crackdowns to keep black turnout low. It was Lott, by the way, who called for the Internal Revenue Service to investigate the NAACP's tax status last year, after its voter education and turnout drives were credited with a massive pro-Democratic black turnout in the 2000 election. And in last month's midterm election, Democrats in dozens of states charged Republicans with using new and old strategies to discourage blacks from going to the polls. Almost 40 years after the Voting Rights Act, the GOP still relies far more than anyone will admit on strategies that pander to white racists and keep blacks away from the polls. "The difference is now they try to do it under the radar," says University of South Carolina history professor Dan Carter, an expert in voting rights history.

What Lott did last week is part of a time-honored GOP ritual: kiss the rings of hateful pro-Confederacy, Southern "traditionalists," and then deny supporting their racist views when challenged. Look at the parade of leaders who've sat down for an interview with Southern Partisan magazine, another bastion of opposition to miscegenation, school integration and the Martin Luther King Jr. holiday. (Its web site is either not working or no longer in existence, so you can't see for yourself.) It's been a rite of Republican passage to talk to Southern Partisan -- Lott, Barr, Attorney General John Ashcroft, former House Speaker Newt Gingrich, former Texas Sen. Phil Gramm -- all have graced its pages. (Even McCain employed an advisor, Richard Quinn, affiliated with the magazine.)

Southern Partisan is where Lott was quoted explaining his feeling that "the spirit of [Confederate president] Jefferson Davis lives in the 1984 Republican platform" and why he opposed a federal holiday for Martin Luther King Jr. The Ashcroft interview was just as bad. "Your magazine also helps set the record straight," he told the editors. "You've got a heritage of doing that, of defending Southern patriots like [Gen. Robert E.] Lee, [Gen. Stonewall] Jackson and [Confederate president Jefferson] Davis. Traditionalists must do more. I've got to do more. We've all got to stand up and speak in this respect, or else we'll be taught that these people were giving their lives, subscribing their sacred fortunes and their honor to some perverted agenda."

But when asked about those remarks during his confirmation hearing, unbelievably Ashcroft denied knowing about the magazine's racist views, and compared it to left-wing Mother Jones -- just another media outlet to which he'd given an interview, despite opposing its underlying philosophy. And unbelievably -- of course Ashcroft was never caught praising Mother Jones for setting the record straight -- he got away with it.

Now Ashcroft is presiding over the other prong of the GOP's Southern strategy, too. His Justice Department just announced a new "Voting Integrity Initiative" to deal with voter fraud, which minority group leaders say will disproportionately hit nonwhites. Although weeding out voter fraud sounds like a bipartisan, good-government priority, The American Prospect shows how historically it's been used to discourage and intimidate poor and minority voters. Efforts to purge voter registration rolls, for instance, tend to hurt those groups, who move around more; strict proof-of-identity requirements do the same thing. A Justice Department study found African-Americans five times less likely to have photo ID than whites.

There's probably no better example of the way such efforts can hurt blacks than Florida's voter-roll scrub in 2000, in which faulty information led the state to purge 94,000 eligible voters, most of them black, who were wrongly thought to be felons. But Bush didn't ask his brother Jeb to apologize for that voting-rights debacle -- not even after it came out that the governor dragged his heels on reinstating those legal voters' rights until after his reelection last month.

GOP forces pursued similar strategies aggressively in the midterm election. Under Ralph Reed, Georgia Republicans sponsored a "fair elections task force" to monitor the polls in November. In Arkansas, Republican poll watchers were accused of intimidating voters in predominantly black precincts by photographing them and demanding identification. In Michigan Republicans stationed "spotters" at black precincts, which Democrats charged meant to intimidate black voters and suppress turnout. In Baltimore, anonymous flyers circulated in black precincts urging voters to turn out Nov. 6 -- a day late -- but to first "make sure you pay your parking tickets, motor vehicle tickets, overdue rent and most important any warrants." Just last weekend, the Louisiana Republican Party paid for political signs in black neighborhoods that read: "Mary, if you don't respect us, don't expect us," an attempt to play on complaints by some African-Americans that Sen. Mary Landrieu hadn't paid enough attention to their issues. It backfired -- blacks turned out, and Landrieu beat her GOP challenger.

But Democrats are part of the reason Republicans get away with this strategy, because too many are ambivalent about the black voters who are crucial to their base. The same weekend African-Americans were saving the party's bacon in Louisiana, keeping Landrieu in the Senate, party leaders were silent on Lott. Or worse than silent: Tom Daschle actually defended him, and it was left to the Congressional Black Caucus to raise a ruckus about Lott's remarks, until other Democrats found their spines. When it comes to race, many Democrats mirror the Republican strategy in reverse: They pander to black voters privately, but try to avoid association with them publicly. Now that Lott has apologized four times, I think it's time for Daschle to come forward and say he's sorry for jumping to his colleague's defense instead of defending his party's most loyal supporters.

Why did the Lott story have legs this time around when it didn't in 1998? Partly it's because the nation was consumed by the impeachment trial four years ago, and could only handle one national political free-for-all at a time. Impeachment was a referendum on sex and politics and whether a public figure is entitled to a private life; we couldn't handle a cataclysm about race and politics at the same time. But I think Lott's dark evasions also resonate more this time because of the nation's sneaky suspicion that there's a gulf between the Bush administration's words and deeds when it comes to race.

At the 2000 Republican Convention in Philadelphia, Karl Rove stage-managed a new, inclusive, multi-hued Republican Party. He did it for the son of the man who employed the great race-baiter Lee Atwater, the former Strom Thurmond campaign manager who gave us Willie Horton, as if to say: This is not his father's GOP. Of course, Rove and Atwater were great friends -- Atwater ran Rove's candidacy for president of the College Republicans -- so there's never been any reason to trust that Rove wouldn't wink at using race the way Atwater did if it worked in his candidate's favor.

Now Rove is said to be behind efforts to topple Lott, believing he'll be a liability to Bush in 2004. As cynical as that is, it's a good sign for American democracy. It means Rove thinks Republicans have more to lose by pandering to white bigots than they gain, that more voters -- women, suburbanites, independents -- will be turned off by Lott's embarrassing racial rhetoric than turned on by it. In a year of bad political news, that's reason for optimism. The GOP will have to do more than dump Lott to eradicate the divisive racial politics he represents, of course, but that they're even talking about it is good news for the nation.