The shelf goes ever onward

Our recommended books on all things Tolkienian for the Middle Earthlings on your holiday list. 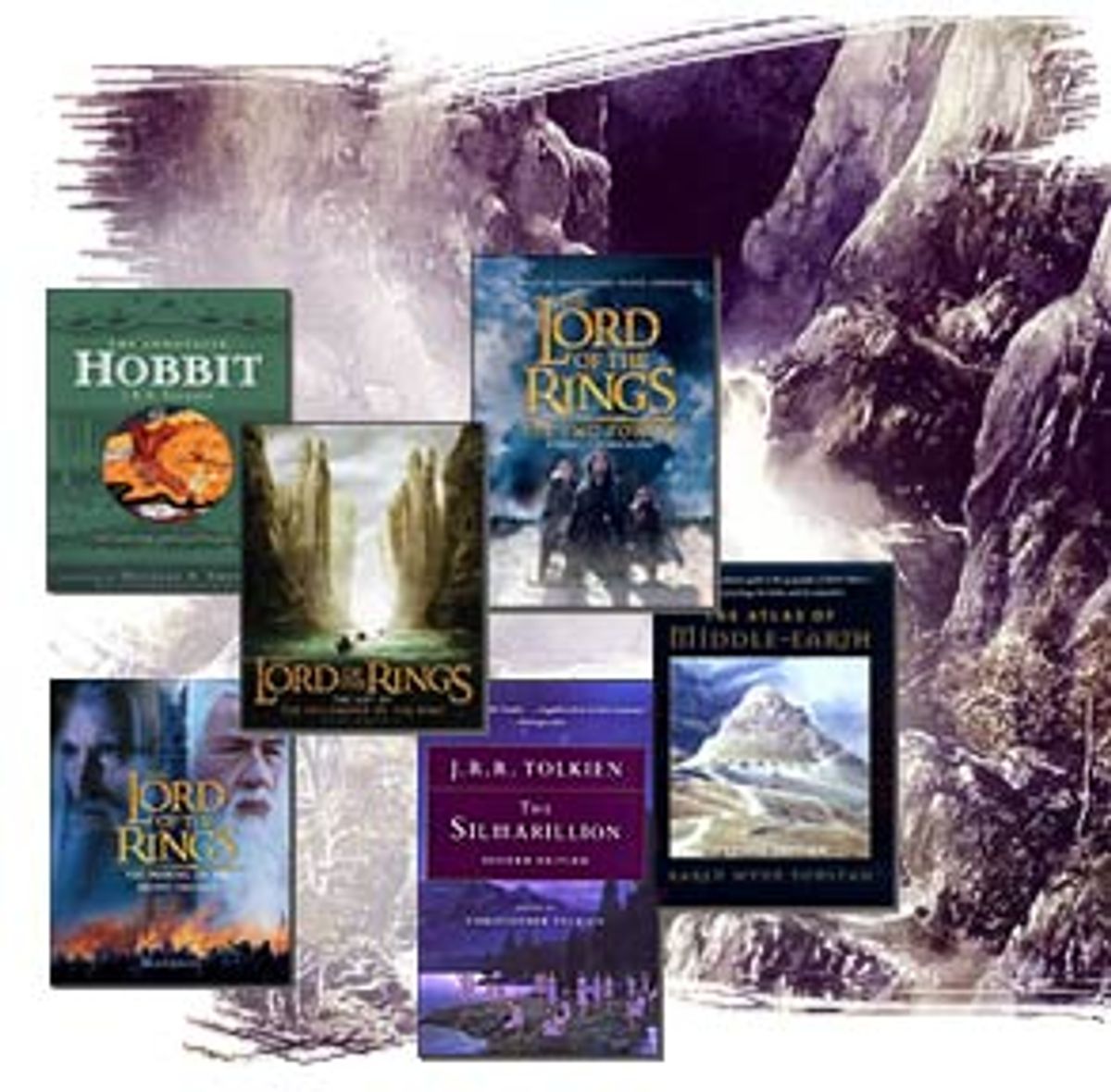 Your quest may not be as harrowing as the one attempted by Frodo Baggins, but that doesn't make it easy: Find a gift for the "Lord of the Rings" fan who's already got the novel and the extended edition DVD of "The Fellowship of the Ring" and heaven knows what else. Please, we beg of you, don't allow yourself to be tempted into the hideous netherworld of collectible figurines. There is still hope, as Liv Tyler's Arwen Evenstar is wont to say. A booming publishing industry has sprung up around J.R.R. Tolkien's epic fantasy novel and now Peter Jackson's film adaptation of the book, and there are enough ancillary volumes to warm the heart of Frodo's bookish uncle, Bilbo.

The first two films in Jackson's trilogy have introduced millions of people to Middle Earth, even if not all of them are ready or eager to delve into Tolkien's books. For those most interested in the cinematic incarnation of "The Lord of the Rings," there are two new photo-laden volumes. The first, "The Lord of the Rings: The Two Towers Visual Companion," is more or less a high-end program for the second film. (A "visual companion" to the film of "The Fellowship of the Ring" came out last year.) It's a nice-enough guide to the various characters and events in the movie and, until the "Two Towers" DVD comes out, it'll give fans a chance to take a prolonged look at some of the film's images. (Plus, for those who noticed that a key element of the Battle of Helm's Deep is missing from the film, there's a hint that the extended DVD version may include it after all. Hooray!)

"The Lord of the Rings: The Making of the Movie Trilogy," by Brian Sibley, is the book equivalent of those "making of" documentaries crammed into the DVDs. It describes in even greater detail how various effects were achieved, sets built and costumes created, and it features profiles of behind-the-scenes designers and technicians. This one is decidedly for the "How did they do that?" crowd, so be careful: Those who prefer to preserve the illusion of reality the films so artfully spin may not appreciate a glimpse of the mechanics behind the magic.

Less wonkish is "The Lord of the Rings: The Art of 'The Fellowship of the Ring,'" by Gary Russell -- an album of paintings and drawings, mostly by Alan Lee and John Howe, two illustrators who'd made careers out of visualizing Tolkien's fiction before the films were a glimmer in Peter Jackson's eye. In fact, Howe and Lee had a profound influence on how the "Lord of the Rings" films look, since Jackson often demanded that their old illustrations be replicated as closely as possible on-screen, and both men served as conceptual designers on the project. (This book also shows early sketches of things like the title sequence and Legolas' clothing, versions that were later abandoned.) The work of other artists is included here as well, and the book is feast for those who, like me, are intrigued by the smaller design elements you barely catch on-screen (those Elven insignia would make great tiles, by the way). Daniel Falconer's costume illustrations are particularly elegant, but there are lots of monster drawings too.

However, Middle Earth was born via the written word (literally, since it was created to serve as a home for Tolkien's invented languages), and that's still the best way to visit it. The good professor's first novelistic foray into that realm was "The Hobbit," much more a children's book than "The Lord of the Rings" but still a delight. "The Hobbit" has just been republished in a revised annotated edition with notes by Douglas Anderson. "The Annotated Hobbit" first came out in 1988, but this new version takes advantage of the reams of secondary material made available in the last 14 years. The detailed notes on various revisions Tolkien made to the text are probably more exhaustive than most readers desire, but the annotations make a rich side dish nonetheless, teeming with trivia about the sources of dwarf names and echoes of the ancient and medieval texts that inspired Tolkien (such as roots of the name "The Misty Mountains" in the Old Norse epic "The Elder Edda"). Plus, this book includes dozens of illustrations of Bilbo's adventures created by many artists over the years; I'm partial to Tolkien's own, which, though a bit weak when it comes to figures, show a pleasingly tensile sense of composition when he's depicting landscapes.

"The Silmarillion" was written before "The Lord of the Rings," but Tolkien made tinkering with it a lifelong hobby, and in the end it was edited by his son Christopher and published posthumously. The current hardcover edition comes with 20 color illustrations by Ted Nasmith, but they are, unfortunately, faintly cheesy in the lamentable tradition of much fantasy art. Still, it could be worse. It could be the Hildebrandt Brothers, who I'll get to shortly. (Christopher also edited the 12-volume "History of Middle-Earth," which comprises all of Tolkien's manuscript drafts related to his creation, but anyone advanced enough to covet that is far beyond any advice I have to give.)

So dense and extensive is Tolkien's invented world that people write reference books about it. Any serious exploration will be enriched by Robert Foster's "Complete Guide to Middle-Earth," an encyclopedia of characters, places and things with a few ideas thrown in for good measure. You can get a bit lost in this book; each entry is likely to mention a name you don't recognize and send you off to another entry and so on. It's a pleasant, meandering way to explore Tolkien's creation if you've got the patience for it, though if you just want to better identify one of the characters in, say, "The Silmarillion" or a collection like "Unfinished Tales," the guide can be frustrating. My chief complaint, though, is that the cover of the current paperback edition sports one of the Hildebrandt Brothers' clumsy, kitschy paintings, which makes it the kind of book you'd rather hide under the bed than leave out for company to spot.

Karen Wynn Fonstad makes the wiser decision to use an Alan Lee illustration on the cover of her "Atlas of Middle-Earth," an equally indispensable volume. The hundreds of maps and diagrams Fonstad has created or expanded upon make it much easier to enjoy the narrative in Tolkien's older lays and legends. They make it less of a struggle to keep the geography straight in your head and are a godsend to those of us who have a hard time following the action in battle scenes. Middle Earth changes drastically from its creation through the Third Age, when the action of "The Lord of the Rings" occurs, with large chunks of landscape disappearing into the sea. One treat in surveying the change maps of the realm lies in seeing the outlines of our own continents begin to emerge.

Tolkien had the notion that he was inventing a pre-history of our world, and his Elves, ents and dwarves are meant to be the inspiration for folk legends about fairies, nymphs and, well, dwarves. Finding his homeland of England lacking in a body of myths of its own, Tolkien aimed to create one, using elements from Germanic and Finnish mythology as well as some Celtic themes (though he was less than fully enchanted with the latter). Tom Shippey offers a solid account of how Tolkien went about doing this in "The Road to Middle-Earth" and a spirited defense of Tolkien's literary reputation in "J.R.R. Tolkien: Author of the Century," a book that focuses on Tolkien's philological studies and makes a case for him as a literarily significant modern novelist. (Shippey's argument is explored in much greater depth in an essay by Salon's Andrew O'Hehir.)

A new book along the same lines is the lively and eminently readable "Myth and Middle-Earth," by Leslie Ellen Jones. A Celticist, she puts perhaps a bit too much emphasis on that cultural tradition relative to the Finnish, Anglo-Saxon and Norse legends that Tolkien loved better, but overall her look at the mythic "cognates" (a kind of recurring conceptual module, a bit like Jung's archetypes without the mystic tinge) that appear in Tolkien's invented lore proves fascinating. (And you gotta love a writer who can find a way to work the expression "suicide by cop" into a book about Tolkien.) Jones finds the roots of Tom Bombadil and his wife Goldberry in the elemental theme of the "Cosmic Couple," a bit of the trickster spirit in Gandalf, and an interesting splitting of the quintessential king-hero figure between Aragorn and Frodo, with Frodo shouldering the bulk of that figure's tragic destiny. She also provides pointers to the various mythic sources that spurred Tolkien's imagination (with recommended translations, too), making "Myth and Middle-Earth" a springboard to further exploration.

The craving for more Tolkien, though, needn't be satisfied solely with works about Middle Earth. Reading "The Letters of J.R.R. Tolkien," edited by Humphrey Carpenter with the assistance of Christopher Tolkien, is in many ways the closest you can get to an extra helping of "The Hobbit" and "The Lord of the Rings." I like to think the voice of Tolkien's letters resembles that of Bilbo Baggins -- if he'd been born human and acquired a professorship at Oxford, that is. Tolkien's letters are really the best source for what the author thought about the world he devised and the characters he created to populate it.

With so many fast and loose analyses of the "underlying values" of "The Lord of the Rings" flying around these days, it's helpful to have Tolkien's thoughts on politics, race, morality and religion spelled out in black and white. The acerbic letter he wrote in 1938 to a would-be German publisher of "The Hobbit" who had inquired whether he was of "Aryan extraction" is, alone, worth the cover price; apart from anything else, it's a fine example of how the elaborate indirection of politeness can be harnessed to deliver a stinging smackdown.

Humphrey Carpenter also wrote the definitive "J.R.R. Tolkien: A Biography." While not really an exemplar of the form, it's accessible and engaging. Tolkien fought in the trenches of World War I and enjoyed a close friendship with C.S. Lewis, even if his was not an especially eventful life. The source of his prodigious inventive powers remains something of a mystery to the end. "His real biography," Carpenter writes, "is 'The Hobbit,' 'The Lord of the Rings' and 'The Silmarillion'; for the truth about him lies within their pages." The truth about more than just him, too, apparently, which is why so many of people have felt the urge to scribble in his margins.