Style with meaning, and vice versa

Don't believe the naysayers: This was a great year in film, from the sexy-sweet "Secretary" to the nasty musical "Chicago." 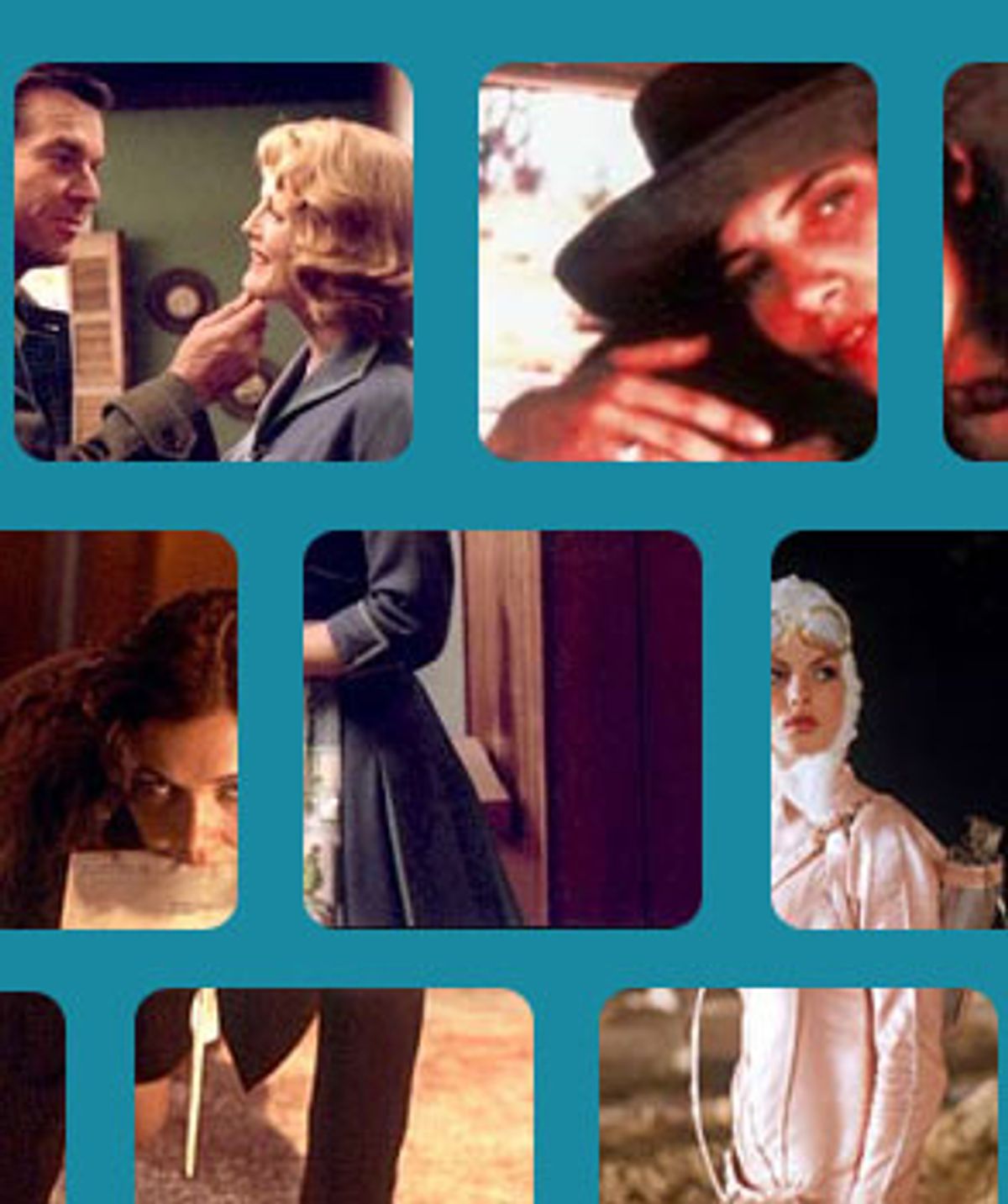 I often hear people complain that the state of movies is just getting worse and worse, that they're all about marketing and commerce (and car chases and explosions), that plots don't make any sense anymore (and they often don't), that there's barely any reason to shell out the $8, $9 or $10, depending on your part of the country, it costs to sit your butt in a theater seat. I always agree with them in theory, because even if you get paid, as I do, to look at stinkers like "Slackers" or "Dragonfly," you can sometimes feel as if your life is being drained away by stupid, bad, carelessly made art.

But by the end of the year -- especially by the end of this year -- I suddenly realize how little I agree with the naysayers. There are always going to be bad movies, and since there are so many more movies being made today than, say, 10 years ago, it only stands to reason that a larger proportion of them are going to be bad.

But what amazes me, at the end of 2002, is how many people manage to make good and even great movies (big or small, Hollywood or not), even though filmmaking is harder and more expensive than ever. (The digital-video revolution, such as it is, has yet to produce a picture that has blown me away -- although there's always hope.) If movies are so bad in general, and if the pressures of moviemaking, particularly in Hollywood, are so high, then how does anyone at all ever manage to do it well? The point is that, yes, it can be done, and the people who made the movies on the following list have proved as much. Whether you think the cup is half-empty or half-full, it's people like these who keep pouring out those precious drops.

1) "Y Tu Mamá También" For craftsmanship and for its outpouring of pure emotion, Alfonso Cuarón's road movie about two teenage boys (they're really more like randy little monkeys) and the "older" woman who sets out with them is my top movie of the year. Those who were familiar with Cuarón's previous work ("A Little Princess," "Great Expectations") already knew he couldn't make a movie without heart if he tried. Thank God he got a chance to prove it to the world.

2) "Far From Heaven" Todd Haynes gets Douglas Sirk -- particularly his notion that you can play the varying frequencies of grand melodrama like a theremin -- and then surpasses him. Not that "Far From Heaven" disparages Sirk; it's the most loving tribute a filmmaker could ask for. But Haynes feels much deeper empathy for his characters, particularly the eternally optimistic but yearning housewife played so wonderfully by Julianne Moore. His movie is pure romanticism with real blood coursing through its veins.

3) "About a Boy" Chris and Paul Weitz took Nick Hornby's fun, satisfying book and made it into an even better movie. They're good humanist filmmakers: They love people even at their most wretched, and they make us feel it, too. And Hugh Grant just gets better, especially when he's allowed to be sarcastic instead of stammering.

5) "Femme Fatale" A lot of moviegoers complained that Brian De Palma's beautifully structured thriller about a very bad girl didn't make sense. Not liking the movie is one thing; claiming it doesn't cut together is something else again. If there were a remedial school for film fans, this one would have to be on the curriculum.

6) "Chicago" Reports of the death of the American movie musical have been greatly exaggerated. At first I was annoyed by the fast edits in "Chicago," the debut picture of Rob Marshall. Then I realized how much it exhilarated me. By the end, I knew that Marshall -- with the not-to-be-underestimated help of Renée Zellweger, Catherine Zeta-Jones, Richard Gere, Queen Latifah and John C. Reilly, among others -- had resuscitated a genre that everyone had thought was DOA. Better yet, it's a crowd-pleaser that retains a hearty streak of nastiness. You could take your mother to it, provided she's the right sort of mother.

7) "The Pianist" Roman Polanski's picture about a young pianist on the run in the Warsaw ghetto is so straightforward that at first you think it's too much of a textbook Holocaust movie. But as it and its blackest black humor unfolds you realize it's like nothing you've ever seen before. Adrien Brody gives a completely interior performance that's also bracingly expansive.

8) "Morvern Callar" Lynne Ramsay delivers a remarkable adaptation of Scottish novelist Alan Warner's strange, wonderful and tough little book about love, loss and getting on with things. Samantha Morton plays a young woman who looks simply benumbed by her boyfriend's Christmas suicide. In response, she goes out partying with her best friend; she gets drunk and high. But there's something in her eyes that lets us know how intense her grief is, even as we also see that she realizes her beloved was at least a little bit of a loser. That's what love is all about: When someone's gone, it's the stupid things you really miss. "Morvern Callar" turns that idea into poetry.

9) "Possession" The subtitle of A.S. Byatt's popular and beloved novel about two academics following the trail of two long-dead poets, "Possession," is "A Romance." In his adaptation, Neil LaBute takes this story of two sets of lovers (a pair of modern-day academics played by Gwyneth Paltrow and Aaron Eckhart, and two Victorian poets played by Jeremy Northam and Jennifer Ehle) and brings it to the screen with care and tenderness. Straightforward and old-fashioned, both in the best possible ways, "Possession" is a movie that puts itself squarely in the service of the lovers who inhabit it. It's a humble and heartfelt picture.

10) "CQ" I have recommended Roman Coppola's debut picture to many people, and I'm pained to admit that few of them love it as I do. But I've also found that the people who get "CQ" really, really get it; these are often people who happened to catch "Barbarella" or "Danger: Diabolik" on TV as kids and, instead of laughing at those movies' obvious cheesiness, fell in love with their clumsy but highly entertaining attempts to explain that style can have meaning. (See, rolling around on a bed strewn with $100 bills is not about the money: It's about looking fabulous.) To me, "CQ" is not about the process of making movies, but all about the deep and lasting pleasure of having watched movies, of allowing them -- even the cheap, corny ones -- to make a mark on you, of opening yourself up to a lifetime of being haunted by glamour. Coppola's movie is glamorous all right; it's also visually alluring and remarkably sweet.

In the end, it's simply about what you love. Here are movies, performances or mere bits and pieces that got to me in 2002: Claire Peploe's marvelous Marivaux adaptation, "Triumph of Love," and Fiona Shaw's performance in it; Tsai Ming-Liang's "What Time Is It There?"; Sandra Goldbacher's "Me Without You"; Nicole Holofcener's "Lovely & Amazing"; Raja Amari's "Satin Rouge"; Michael Winterbottom's "24 Hour Party People"; Jacques Audriard's "Read My Lips"; and Rob Minkoff's "Stuart Little 2." Sometimes it's largely actors who make moviegoing worthwhile. Aside from the actors mentioned above, I need to make note of Mick Jagger in "The Man From Elysian Fields," Michael Caine in "The Quiet American," Raven Goodwin in "Lovely & Amazing," Viola Davis in "Far From Heaven" and "Solaris," and Jake Gyllenhaal in "Moonlight Mile." Special nods to "Frida," for looking so wonderful, and to "Undercover Brother" and "Austin Powers in Goldmember" for making me howl (laughter should never be undervalued). And last of all, to "The Powerpuff Girls Movie," for making a hell of a lot more sense than "Spirited Away."