"Catch Me If You Can"

Leonardo DiCaprio looks great in those '60s threads, but Steven Spielberg's story of a legendary hustler is sadly short on period zip, zowie and va-va-voom. 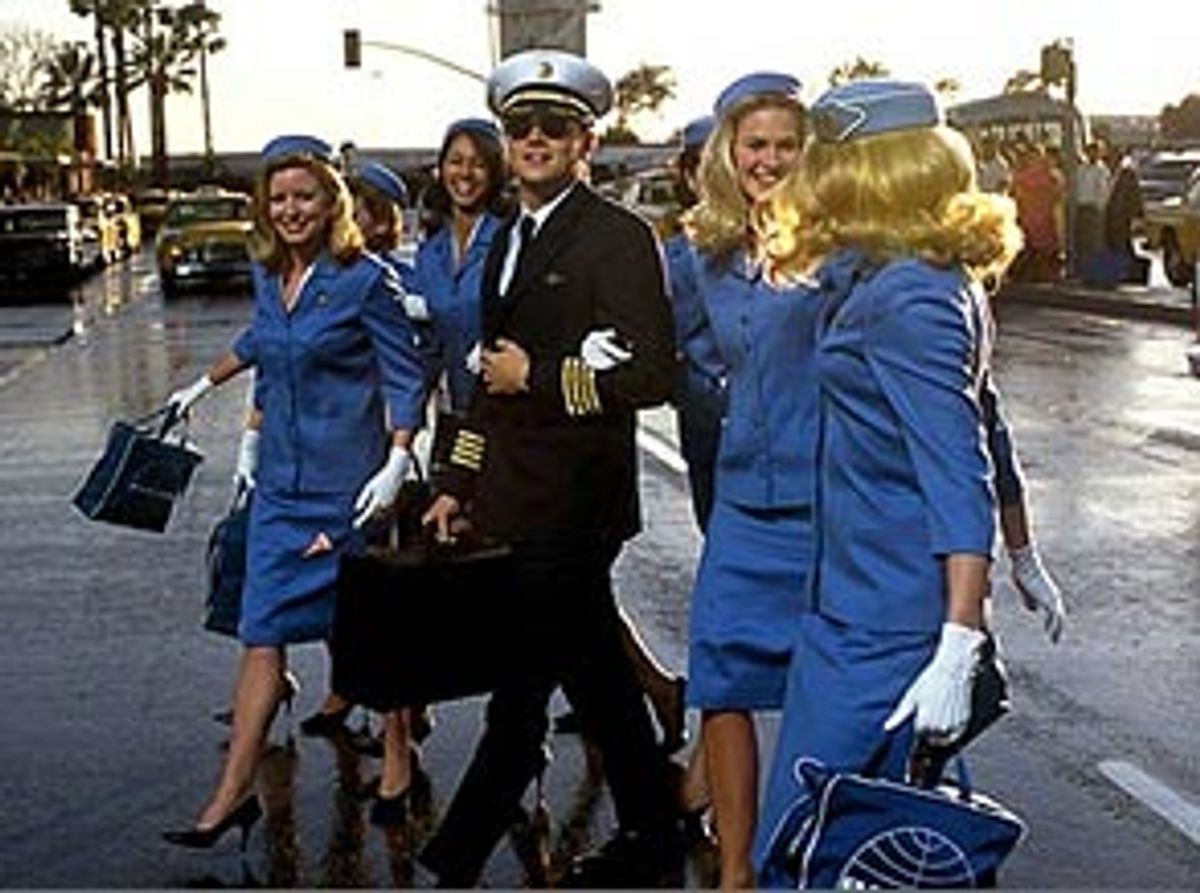 There's an irony buried in "Catch Me If You Can" of which even the director, Steven Spielberg, may not be aware. Spielberg has often been accused of making movies that pine nostalgically for a simpler American past. But the pining in "Catch Me If You Can," set in the 1960s, is for a time before the widespread use of computer technology, when it was so much easier to bilk people.

"Catch Me If You Can" is an ode to con games and larcenous behavior, to a time when a smart scam artist could take advantage of the way banks and businesses were willing to cash checks for anyone who looked respectable. Written by Jeff Nathanson, it is based on the autobiography of Frank Abagnale Jr., who in his teens and early 20s became one of the country's youngest and most successful con men, passing millions in fraudulent checks and posing as an airline pilot, a doctor and a lawyer.

Frank (played by Leonardo DiCaprio) is the son of a charming but strictly small-time businessman, Frank Sr. (Christopher Walken), who isn't above a harmless con to get what he wants. But Frank Sr.'s tax-fraud problems catch up with him and eventually wreck his marriage to the French beauty (Nathalie Baye) he brought home from World War II. As the movie tells it, Frank Jr. runs away from home when his parents divorce, begins passing bad checks as a simple means of survival, and graduates from there to impersonating any profession that's imbued with a certain amount of glamour.

It's good to see Spielberg working on a piece of sheer entertainment instead of tackling another of the big "serious" subjects that have turned his career into a series of prestige events. And it's good to see him working on something that's essentially optimistic. (Fascinating as "Minority Report" was, it felt strained because Spielberg is not an instinctive pessimist.)

"Catch Me If You Can" starts off on a sleek, sprightly note with an elegantly animated credit sequence, done in tones of blue and black, in which a chameleon con artist is pursued by a G-man. It's like a '60s luxe version of "Spy vs. Spy." Composer John Williams temporarily abandons his routine bombast for a theme in which nervous noir scherzos evoke the music that Bernard Herrmann composed for Alfred Hitchcock's "North by Northwest."

For a while, the movie takes real pleasure in watching DiCaprio's Frank pull off his grifts. When a couple of bullies give him trouble the first day at his new school, he simply strides into the classroom, announces himself as the new substitute French teacher and takes over. It's such a ballsy, ingenious scheme that even Frank Sr. can't help but smile in admiration when he hears about it.

Young Frank is a crooked version of one of the boy dreamers and adventurers who've long populated Spielberg's movies. We've always seen toys in the rooms of Spielberg's kids, and here we see a gaggle of toy airplanes soaking in Frank's bathtub. The difference is that Frank is soaking the tiny Pan Am logos off these planes and affixing them to checks. His impersonation of a pilot, and later a doctor and a lawyer, are simply a kid's version of dress-up taken too far. Frank is in love with the way people look at him in his pilot's uniform or doctor's white smock, like a young god. He doesn't feel any animosity or contempt for the people he's fooling; he wants them to like him, and he basks in their adoration.

A wild kid who's in love with the appearance of things -- not just with how he looks in uniform but with how he looks in good suits and fancy hotel suites and fine restaurants -- is a great subject for a movie, since movies are themselves in love with alluring surfaces. And Spielberg has been smart enough to cast another alluring surface, Leonardo DiCaprio, in the role. That's not to slight DiCaprio as an actor. He's very good here, and often quite touching. But the meaning of the movie is in his baby-smooth good looks.

When Frank, posing as an airline pilot recruiting stewardesses, strides through an airport with 10 good-looking girls in uniform, DiCaprio beams the contentment of a boy pasha. There's very little self-satisfaction to Frank. Underneath his confident exterior, he's got the gee-whiz excitement of a kid who can't believe he's getting away with it. It may be morally lazy to say that we like Frank because he's scamming banks and hotels and corporations instead of bilking old ladies out of their Social Security checks. After all, the millions he scammed came out of somebody's pockets. But of all the amoral temptations the movie throws in our path, thievery is the hardest to resist, especially when it lets us live out our dreams of a lush life.

If only Spielberg had been able to groove on that same vibe. Something in him balks at making a simple celebration of deceptiveness. He and screenwriter Nathanson turn Frank into another of Spielberg's lonely, misunderstood kids, running away from the pain of a broken home, living out the dreams his beloved, hapless father couldn't realize. As Christopher Walken plays Frank Sr. -- which is superbly -- you can almost buy it. You know immediately where his son's dreamer streak comes from when, for probably the umpteenth time, Frank Sr. recounts the story of how he plucked his wife, Paula, from the tiny French village where he laid eyes on her dancing in a small club. And when he twirls Paula around the living room, you know why she fell for him.

Except for his show-stopping number in "Pennies From Heaven," Walken's talents as a hoofer have been criminally underused in movies. Watching him glide his wife around their living room provides "Catch Me If You Can" with one true, fleeting moment of bliss. You just want the movie to stop so you can watch Walken go on dancing. Perhaps it's that strange, innate reserve of Walken that allows him to play this man without lapsing into sentimentality, and why you allow your heart to break a little for him. This is Walken's most touching performance.

Though "Catch Me If You Can" isn't badly made, the fun slowly leaks out of the movie. There's a peculiar sequence involving Jennifer Garner (of the TV series "Alias") as a hooker Frank picks up in a swank hotel. Spielberg simply seems too uptight to enjoy the thought of his hero enjoying a night of sex with a high-class call girl, and though it ends with a comic fillip, it feels awkward, distinctly uneasy. And I couldn't figure out why Frank falls so hard for the drippy little candy-striper (Amy Adams) he meets while posing as a doctor. (Though it's fun watching him con her father, played by Martin Sheen. Sheen is such a dull actor, such a repository of virtue, that something in you just begs to see the young sheik DiCaprio put one over on him.)

What really bogs the movie down is the symbiotic relationship that builds up between Frank and Carl Hanratty (Tom Hanks), the straight-arrow FBI agent who pursues him. Instead of playing up the joy of this cat-and-mouse chase, something that Abagnale and Hanratty probably both enjoyed on some level, Spielberg turns the pursuit into a way to expose the loneliness of each of these characters. Hanks, who uses a bad Boston accent, gets some humor out of this no-nonsense Fed (especially when the two agents working with him complain that he's humorless). But you don't ever really believe the performance because you're too aware of the way Hanks is squeezing it into Carl's horn-rimmed glasses and Robert Hall suits. Carl works on Christmas Day to escape the pain of his busted-up marriage, and Frank increasingly despairs of a life on the run, calling Carl each Christmas because there's nobody else for him to call.

That may indeed be the story of Frank Abagnale's life. But in a movie that promises us the chance of vicariously enjoying the material pleasures that a scam artist was able to surround himself with, it's a bummer. Abagnale was finally caught in the late '60s and sentenced to 12 years in federal prison. He got out when he agreed to bring his expertise to the FBI's check-fraud investigations. Today he's a leading security consultant. That's a great irony -- the con man who's so good he winds up working for the very people who put him behind bars. It's the ultimate validation of Frank's fantasies -- a fake pilot, fake doctor and fake lawyer who winds up as a real-life G-man. But somehow Spielberg misses the irony. He plays Frank's redemption straight.

There was a scene in Oliver Stone's bloated and ludicrous "Nixon" where Anthony Hopkins' Tricky Dick is flirting with a hooker at some political smoker. When the girl asks him whether he likes jazz, Nixon replies, "Sure. Guy Lombardo." Spielberg isn't that much of a square. But he's made a movie that trudges when it should swing. I left "Catch Me If You Can" longing for the American looniness that Robert Zemeckis might have brought to it at one point, or that Joe Dante probably still could. Spielberg has lost the pop-culture buzz, the love of our own native fantasy life in which those directors specialize. "Catch Me If You Can" is well-enough made and highly watchable, but it lacks the one thing that would put some swing in its step and some swagger in its attitude: a sense of jazz.