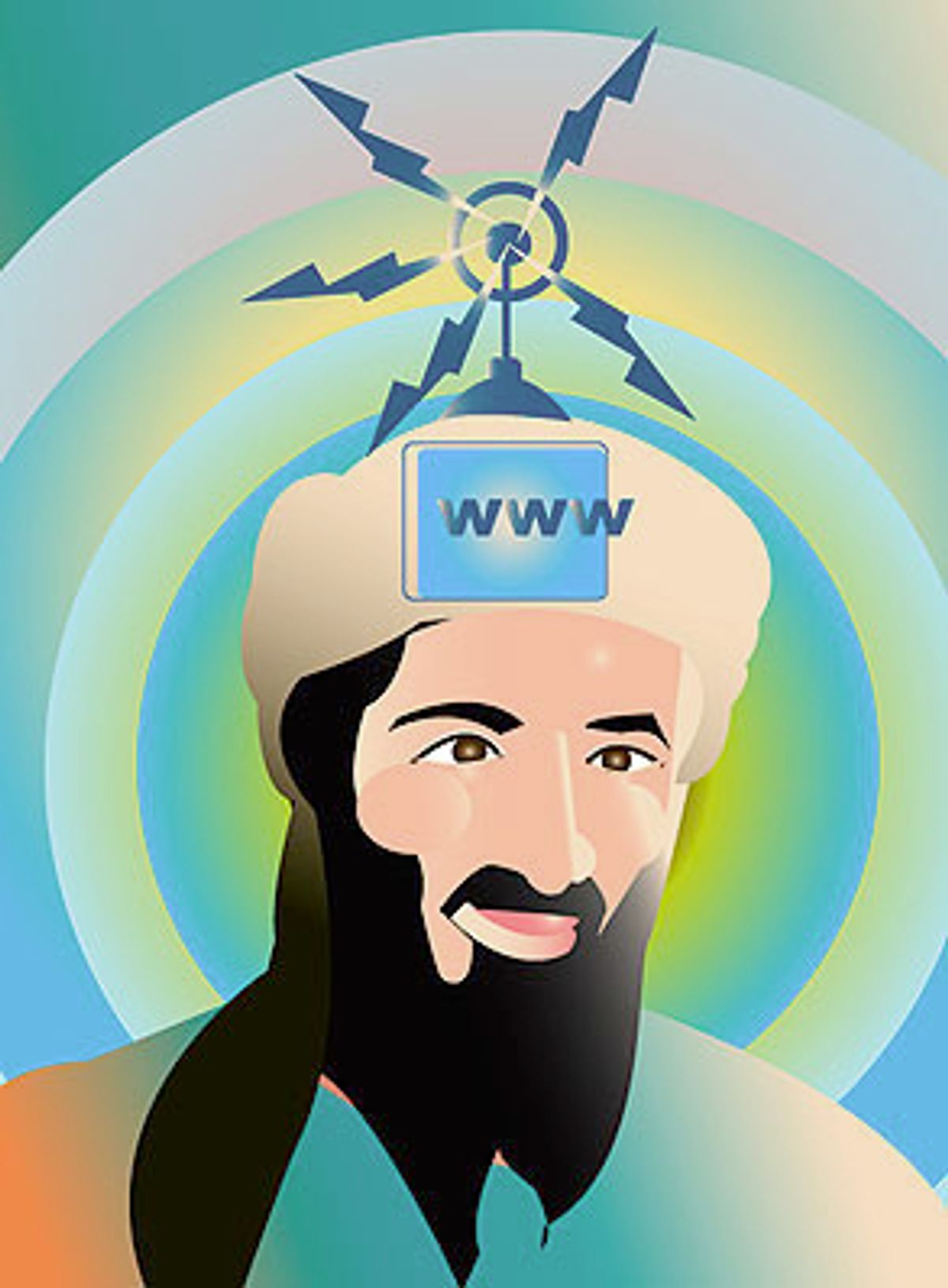 1. I know what you're going to do next summer

Total Information Awareness, the Defense Department's system to record and monitor everything Americans do, will fail to detect coming attacks on the United States -- but TIA will find new life as an invaluable opposition-research tool for political campaigns. For example, Democrats will aim the system at Trent Lott in an effort to discover "patterns" of Republicans with questionable histories on race relations -- and TIA will attempt to predict the next time one of them will make a racist gaffe. This will cause Republicans to call for TIA to be immediately dismantled, but Democrats will accuse them of being soft on terrorism.

2. God is dead in Silicon Valley

A right-wing blogger will link to the Atheists of Silicon Valley Web site as evidence that the heathen ways of self-proclaimed "godless geeks" are a primary reason for the region's ongoing economic doldrums.

The accusation will set off a firestorm of recriminations and counter-jeremiads among ever-vigilant bloggers. After a few months of nattering, this important "story" will trickle out into the mainstream media, when FOX News asks: "Does Jesus love Silicon Valley?"

On a mission of hope, Pat Robertson will come to Palo Alto to hold a prayer vigil for the return of the market for high-end Cisco routers. Thousands of still-unemployed Internet marketing executives will show up to network with each other.

In 2003 al-Qaida will attack the Internet, and chaos will ensue. Amazon.com will start recommending visitors purchase a bin Laden mug with every item. If you type "the bachlor" into Google -- misspelling the name of the popular American TV show -- the search engine will respond, "Did you mean: Al Jazeera?" But al-Qaida's Internet won't be all bad. First, in an effort to gain public sympathy, bin Laden will issue a fatwa banning all spyware and pop-up ads; then, offended by the suggestion that his manhood doesn't satisfy, Osama will order his henchmen to severely punish spammers who offer "all-natural," pump- and pill-free methods of growing certain body parts. Having made the mistake of using Microsoft Outlook for his e-mail, however, bin Laden's reign of cyber terror will be brief -- he'll succumb to the Anna Kournikova virus.

For serious environmentalists, being a member of AAA will be a sin equivalent to driving a Hummer to a global-warming teach-in.

Tens of thousands of compact-car-driving, white-paper-recycling bobos will resign their memberships to protest AAA's covert, regressive lobbying of Congress on environmental issues.

Thousands of righteous former AAA members in Oregon, California, Washington and New York will find themselves in broken-down vehicles on the side of the highway with no one to call for help. But at least they'll feel good about themselves.

5. Just when you thought it was safe to turn off the TV

After Web surfers rebel against ever-more annoying pop-up and Flash ads, online advertisers decide to adopt a new, "far less troublesome" format for commercials: streaming video ads, just like on television. For every 20 minutes on the Web, "viewers" will be required to download three minutes of ads. "This is just what the Web needs for the masses to start believing it's more than just a fad," one advertising executive will say. And he'll turn out to be right -- having found the right ad delivery method, Web businesses will once again boom. Ad money will pour into content sites, which will, in turn, decide that interactivity is part of an "old paradigm." The new Web paradigm will be one in which you just sit back and watch the screen: New "shows" will begin at pre-determined times, and will last for standard lengths of 30 and 60 minutes.

The Pets or Food IPO will start a new dot-com mania, when fund-managers recognize that serving kitten-meat to prison inmates is a great cost saver for the $278 billion correctional facilities industry. The long out-of-work Pets.com sock puppet will be sold on the site for more than $3 million. The conniving wanna-be wives on "The Bachelor" will rip apart the puppet and consume it as a rare delicacy on a very special, sweeps-week episode. Pets or Food's stock will go up 478 percent the next day.

7. Cashing in on freedom

In early March, Oliver North and the National Rifle Association will host a week-long cruise to the Caribbean to celebrate "the 20th anniversary of the liberation of Grenada."

When overeager participants try to use their M-16s and AK-47s to take out the Norwalk virus -- which has no political affiliation -- the Princess Cruise ship will go the way of the Titanic.

The popular discussion site for fans of open source software will disclose that it's perilously close to bankruptcy and needs to make all Slash code proprietary in order to survive. Slashdot regulars will rebel, and some will attempt to set up alternative discussion sites -- but Slashdot's founder, Rob Malda, will sue under the Digital Millennium Copyright Act to prevent any copycat sites. When readers accuse the site of "monopolizing" all the vital discussions of the various ways of cooling your computer with liquid nitrogen, Justice Department officials will threaten prosecution of Sherman antitrust violations. But Slashdot will prevail, after hiring David Boies, litigator to the stars.

In a fractious city council meeting, the City of San Jose will officially dump the slogan "capital of Silicon Valley," declaring the brand association a liability in 2003.

No new slogan will be adopted.

Pledging to raise private funds for the public lands, the Department of the Interior will sell naming-rights to all national parks, wildlife refuges and national forests. Yellowstone, the nation's oldest national park, will become the first park to take the plunge, becoming Yellowstone Ford Explorer National Park.

"There's no reason industry and nature can't support each other," Interior Secretary Gale Norton will vow at the announcement of the new Total Commercialization Awareness initiative. "The spotted owl would have wanted it this way."