A postseason to remember?

Will one of the wildest regular seasons in NFL history make for equally entertaining playoffs? Maybe -- but there's still something to be said for dynasties and villains. 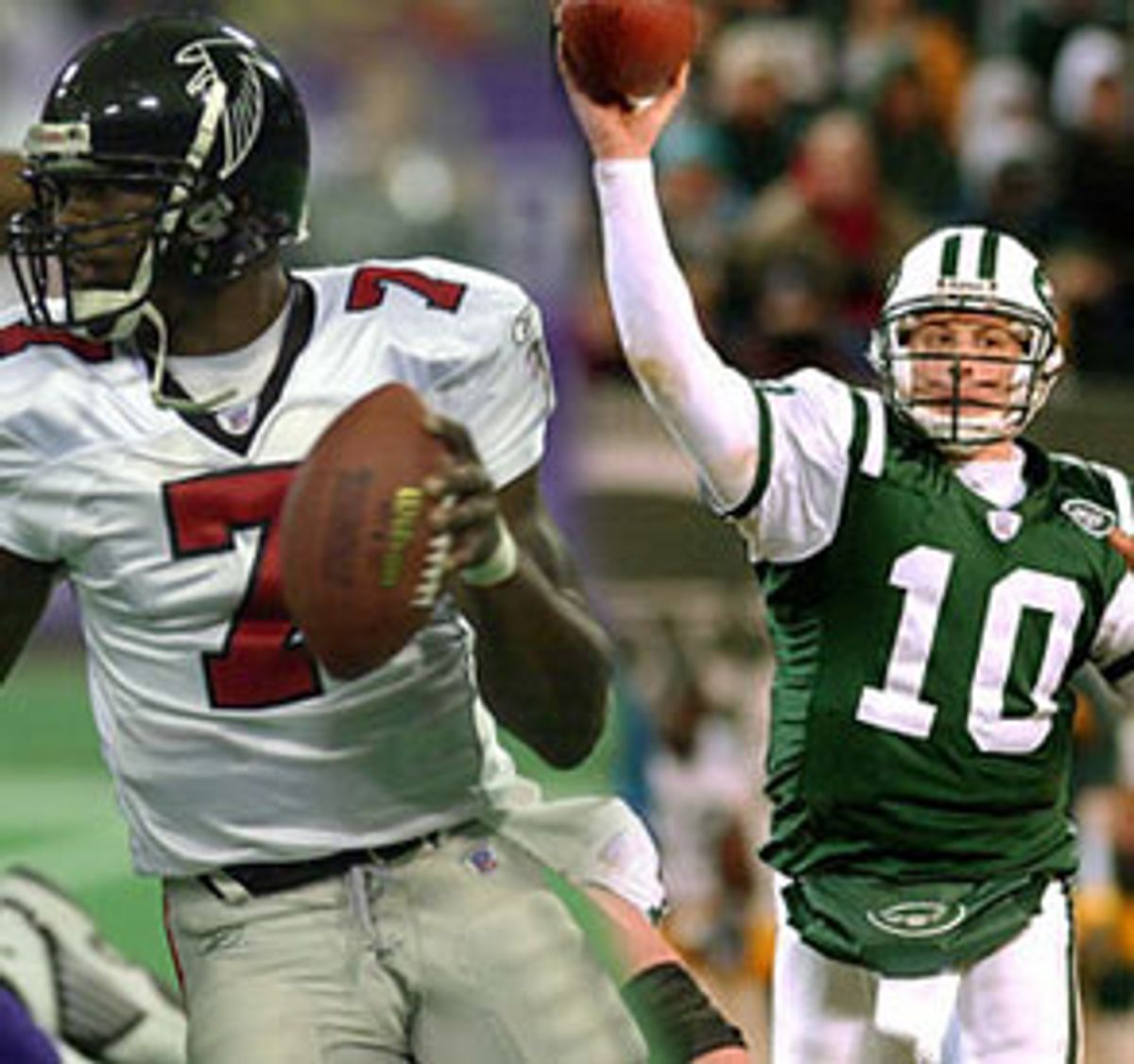 Here's how unpredictable the NFL season was: If the Green Bay Packers had beaten the New York Jets last Sunday, I would have correctly predicted six of the eight division champions and three of the four wild card teams.

As many, or perhaps all three, of my regular readers know, my prognosticating skills are so weak that if I say the sun's coming up in the East tomorrow, you might want to think about taking North, even if you have to give points. For me to blunder into naming seven of the 12 playoff teams before Week 1 -- nine if the Packers had shown a pulse last weekend -- proves that anything can happen.

This is both a good and a not-so-good thing. Good because unpredictability is exciting. Not so good because I still believe -- though not quite as strongly as I did 17 whiz-bang weeks ago -- that the NFL is missing something without great teams who sustain success over several years. It's fun when David wins, but not so much if there's no Goliath.

The 2002 NFL season was about as much fun as a regular season can be, especially in the AFC, where almost everybody stayed in playoff contention until the last weekend or two. Even fairly late in the year, teams were going from out of the playoffs to first-round bye, or vice versa, in one week. Just two weeks ago, did you think the New York Jets, New York Giants and Cleveland Browns would be in the playoffs and the Miami Dolphins, New Orleans Saints and New England Patriots wouldn't?

And just when you had things figured out, you didn't. The Giants, for example, started 3-4, but then head coach Jim Fassel took over the play calling and they won three straight, though over relatively weak opponents. Now they were 6-4 and on a minor roll, with a game against expansion Houston coming up. They lost. What? Then they lost again to Tennessee. So long, Giants. Then they won four straight, the last two a 17-point win at Indianapolis -- which had won five of its last six -- and an overtime win in a do-or-die game against Philadelphia.

And they still only made the playoffs because the Atlanta Falcons lost three of their last four and the New Orleans Saints pulled off a collapse on the order of the 1964 Phillies and the 2000 NASDAQ. As it turns out, the Saints, who had started the year 6-1, only had to win one of their last three to make the playoffs, against Minnesota (3-10 when they played the Saints), Cincinnati (1-13) and Carolina (6-9). They lost all three.

This topsy-turviness makes for a never-a-dull-Sunday kind of season. The Texans beat the playoff-bound Giants and Steelers, but otherwise went 2-12. The Bears beat the playoff-bound Falcons and Jets, but also went 2-12 in their other games. The Vikings went 3-10, then woke up and beat the Saints and Dolphins. The Panthers lost eight in a row in the middle of the season, but otherwise went 7-1. The Raiders, the top seed in the AFC, lost four in a row at one point. The NFC champion Rams lost their first five, won their next five, then started losing again.

But now that it's playoff time, that same topsy-turviness takes a little of the luster off of things. It wouldn't be a huge surprise for even the weakest of the 12 playoff teams (probably Cleveland) to go on a run and win the Super Bowl, but wouldn't it be something if there were one or two really great teams that everyone else was gunning for? The Eagles in the NFC and the Raiders or Titans in the AFC appear to be the teams to beat, but it's hardly inconceivable that someone will beat them. The Browns winning at Oakland in the second week of the playoffs would be an upset, but it wouldn't exactly be like the mighty '75 Steelers losing in the divisional round. Wasn't it a thrill to see the Rams, who were as close to being a dynasty as anybody gets these days, lose last year's Super Bowl? There won't be that kind of upset this year. There can't be.

And we probably won't remember this year's champs the way we remember those mid-'70s Steelers, or the Packers, Dolphins, Cowboys and 49ers of other periods. They won't be great enough, and by the time they're broken up in a year or two -- the result of a severe salary cap that makes it virtually impossible to build a great team, or to keep even a good one together for long -- they won't have been good for long enough for us to have strong memories of them. Other than Ray Lewis, what will you remember about those 2000 Ravens in 10 years?

I like to root for the underdog, so I ought to be overjoyed at seeing the Browns, a fourth-year expansion team, make the playoffs. But gee, I kinda wanted to see the defending champion Patriots make it instead -- so I could root against them. I have a relationship with the Pats. They got to the Super Bowl last year thanks to a rotten call by the officials, then they beat my hometown team. And if they'd made the playoffs this year, it would have been because of another rotten call -- a bogus pass interference late in their comeback win over the Dolphins. I'll root for the Browns when they play the Steelers because they're the underdog, but the real fun of an upset isn't seeing the underdog win, it's seeing a villain toppled. The Steelers are kind of an underdog too. Everybody is. I'll miss New England.

It's interesting that pro football's efforts at competitive balance, at giving every team a shot, have had the opposite effect of a similar effort in baseball.

The baseball powers expanded the playoffs and realigned from four divisions to six in the mid-'90s, putting twice as many teams in the postseason and keeping even more than that in contention down the stretch. This has had the effect of ruining the pennant races while making the playoffs more exciting. That's a bad trade in baseball, because its pennant races were uniquely wonderful, with the best teams fighting to the death. The more wide-open playoffs are a lot of fun, but they don't make up for that loss. In baseball, the regular season is the main course. The postseason is dessert.

Football's different. The season is astonishingly short, in mathematical terms, a mere 16 games, less than a tenth of the baseball season's length. Bigger playoffs mean that the good teams qualify early, and it's the secondary clubs that are racing each other down the stretch. That's bad in baseball, where by the time 130 or so games have been played, it's clear that the secondary teams are really secondary. In the NFL, where a two- or three-game stumble can drop you well down the standings, the best teams are sometimes the ones battling for their lives in December.

Last summer I would have said that sacrificing excitement, in the form of great teams, in the playoffs -- football's main course -- for thrills in the bliplike regular season is a mistake in football. Now, after this roller-coaster of a year, I'm not so sure. Maybe these playoffs will, despite their lack of dominant teams, somehow be so exciting that I'll make the leap and embrace parity once and for all.

Here's how I see them stacking up -- and remember, gamblers, that caveat about the sun:

Indianapolis Colts at New York Jets (4:30 p.m., ABC): The Jets: They're hot. They're sexy. They're dead. They're playing so well lately, and the Colts have been so so-so, that there's no way the Jets win. Don't laugh. I picked every game of the regular season using just that kind of logic, and I went 161-94-1. That's a .631 winning percentage, the equivalent of a little better than 10-6. That's good enough to make the playoffs. Colts.

Atlanta Falcons at Green Bay Packers (8 p.m., ABC): You've heard over and over that the Packers have never lost a playoff game at Lambeau Field, right? As if the Pack's 40-23 win over Cleveland in the 1963 third-place game has any bearing on what Brett Favre and company do. It doesn't. They'll still beat the Falcons, though. Packers.

Cleveland Browns at Pittsburgh Steelers (1 p.m., CBS): The Steelers were my pre-season choice to go to the Super Bowl. That's not likely to happen now. Pittsburgh has beaten the Browns twice already this season, and they say it's awfully hard to beat the same team three times. That's true. It is hard. Steelers.

New York Giants at San Francisco 49ers (4:30 p.m., Fox): The Giants are the chic pick of the week. They won four straight to end the season and now all the cool analysts are picking them to win, especially after the Niners imploded in the fourth quarter Monday night in St. Louis. It was a meaningless game, sure, but that sort of thing affects a team, the thinking goes. Not this thinking. 49ers.

AFC: Raiders over Colts and Titans over Steelers next week, then the Titans over the Raiders in the title game. NFC: The 49ers upset the Eagles and the Buccaneers beat the Packers next week. Then the Bucs win the conference title by beating San Francisco. Tampa Bay wins the Super Bowl.

Of course, I reserve the right to start again after my picks for this weekend all get beat.