Bring back the draft?

Rep. Charles Rangel says yes -- the poor, black and brown shouldn't be the only Americans fighting and dying in Iraq. 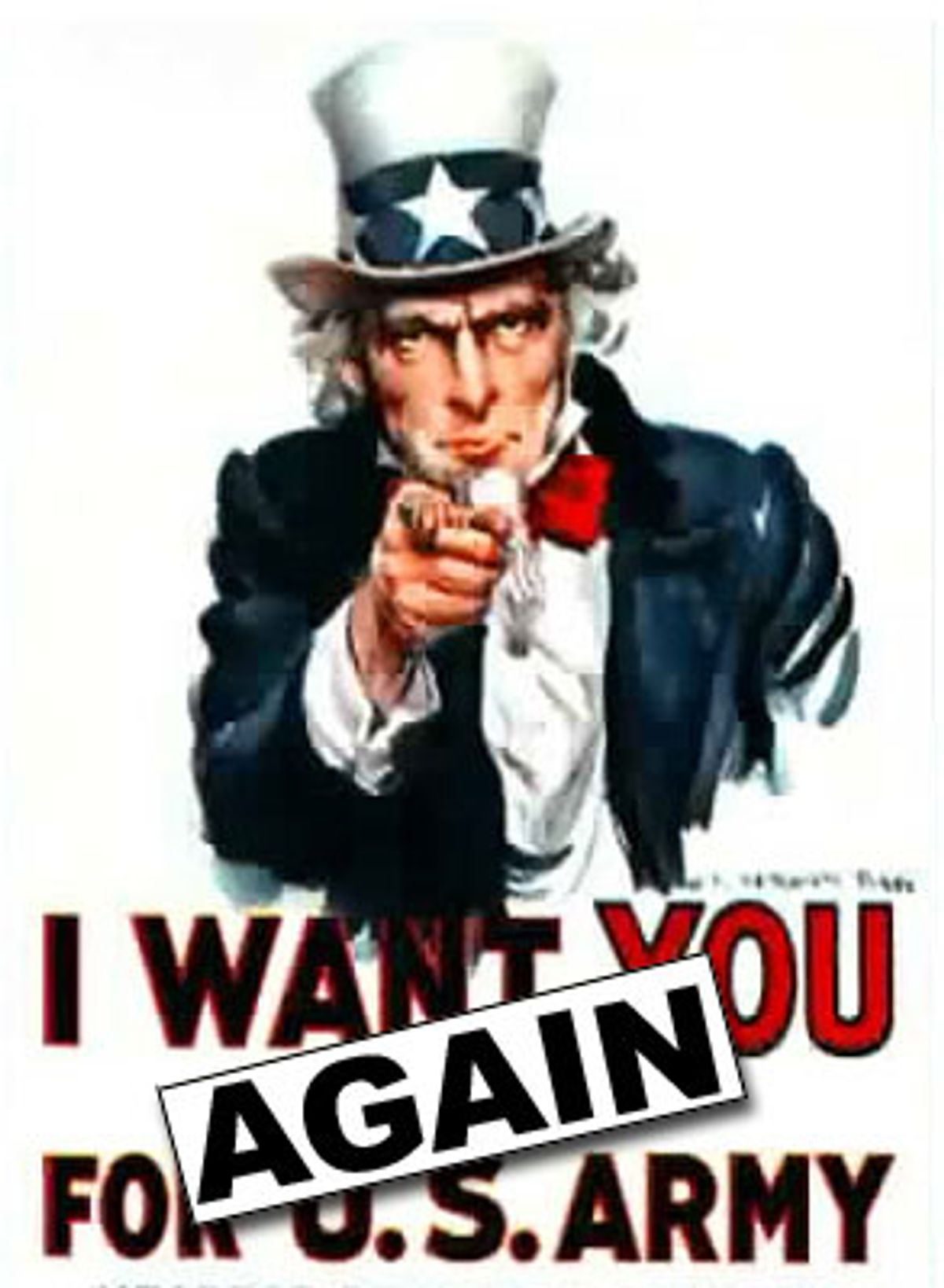 Rep. Charles Rangel, D-N.Y., will introduce a bill Tuesday that he admits has no chance of passing. But as the U.S. prepares for a war with Iraq, Rangel is introducing legislation to restart the military draft, in an effort to inject questions about race and class into the Iraq debate, and force Americans to think twice about rushing into war.

Class is at the heart of the debate over the Bush administration's domestic policy agenda. Democrats insist the president's economic plan benefits the wealthy at the expense of the poor, while Republicans accuse Democrats of fomenting Marxist class warfare with their arguments against the Bush tax cuts. But questions of race and class rarely come up in foreign policy debates -- though Rangel insists they're crucial, especially when looking at the all-volunteer military that will fight a war with Iraq.

Today's armed forces rely heavily on minorities, the working class and the poor, he says, who turn to the military because few other opportunities are available to them. Roughly 40 percent of the U.S. military is minority, compared to a quarter of the overall population. African-Americans are particularly likely to join: They make up 26 percent of the military, but only 12 percent of Americans.

Fairness dictates that the sons and daughters of the white middle and upper classes share the burden of war, Rangel argues. And if they did, he notes, there might be a larger movement for peace. "I believe that if those calling for war knew that their children were likely to be required to serve -- and to be placed in harm's way -- there would be more caution and a greater willingness to work with the international community in dealing with Iraq," Rangel wrote in a Dec. 31 New York Times Op-Ed. "A renewed draft will help bring a greater appreciation of the consequences of decisions to go to war."

Republicans have dismissed Rangel's proposal as a cheap political stunt. "A member introducing legislation that they don't really support in order to play politics and embarrass the president is disingenuous," said Rep. Nick Smith, R-Mich.

But Rangel spokesman Emil Milne says his boss does in fact support reviving the draft, if the nation is headed to war with Iraq. But only one other member of Congress, Michigan Democrat John Conyers, has come out publicly in support of Rangel's call. A spokeswoman for the Congressional Black Caucus said the group hadn't formally discussed the issue, but pointed out that since members of the caucus were split over the war vote, the caucus was unlikely to take a position on the draft issue.

And many antiwar activists are critical, too. "My eyes kind of rolled when I saw it," Mike Zmolek, spokesman for the National Network to End the War Against Iraq, said of Rangel's draft proposal. "To me, it's like, give the right what they want, so that they don't do what they want? It doesn't make any sense."

But Zmolek says he is sensitive to some of the issues Rangel raised. He points to a Web site, called the Chicken Hawk Database, dedicated to many of the most strident administration and media hawks who never served in the military themselves. But he believes there's enough administration hypocrisy on the issue without focusing on the contradictions of the all-volunteer military.

Some veterans groups who have come out against war in Iraq, though, are sympathetic to Rangel's view. "I've been convinced for some time that we should bring back the draft," says Charles Sheehan-Miles, spokesman for Veterans for Common Sense. Sheehan-Miles fought in a tank battalion in the Gulf War, he says, and later claimed conscientious objector status after a particularly bad incident at the front. "I know it may be an odd position for a conscientious objector to take, but I think the lack of a draft is the reason it's so easy for us to get into so many conflicts nowadays."

Sheehan-Miles says his position has not been officially endorsed by his organization, but that the subject of the draft is on the agenda for the group's next meeting.

"Less than a majority of members of Congress have ever served in uniform," he adds. "These are the folks who are making life and death decisions, and they're not really bearing the costs of those decisions anymore except in strictly economic terms."

Matthew Crenson, professor of political science at Johns Hopkins and coauthor of "Downsizing Democracy: How America Sidelined Its Citizens and Privatized Its Public," agrees that if there were a draft, American leaders, and the American public, might think twice about sending troops into harm's way.

"There is a rationale behind what Congressman Rangel has proposed," Crenson says. "If you tie foreign policy to conscription, you make it much more susceptible to democratic influence. Support for war with Iraq is pretty weak, or at least nothing near unanimous. But that's irrelevant as far as the administration is concerned."

Crenson admits Rangel's bill could be a ploy to drum up support against the war in Iraq on the American left. "It provides a platform for calling attention to the inequities that exist even in a volunteer army. It also may help to show what kind of support there is for the Iraqi war."

Sheehan-Miles says he has not seen concerns about racial and class inequities at the forefront of the antiwar movement. "I haven't had a sense from people on the political left that there's a real concern about it," he says. And, he adds, not many on the left share his views that restarting the draft may be a way to keep American troops out of all but the most critical conflicts.

"I've seen it more in circles in the veterans organizations, people involved in Gulf War issues in particular. But I haven't seen it talked about among the antiwar folks that I know," he says. "When I tell them I support the draft, I've always gotten nasty looks from people."

Rangel spokesman Emil Milne says his boss is familiar with nasty looks when he raises his draft proposal, on both sides of the aisle. "We would be less likely to see Republicans supporting something like this, because they support the class of people who benefit the most from the current situation, who are least likely to serve," Milne observes. "They represent the upper class, nobody argues with that. But it isn't as if the Democrats are jumping up to support this.

"Mr. Rangel has really been baffled, and frankly disappointed, that in all of this talk about war, nobody seems to be asking, well who's going to actually [fight]?"