What do you do when your wife kills herself? Sit around in your underwear and huff gas like Philip Seymour Hoffman. 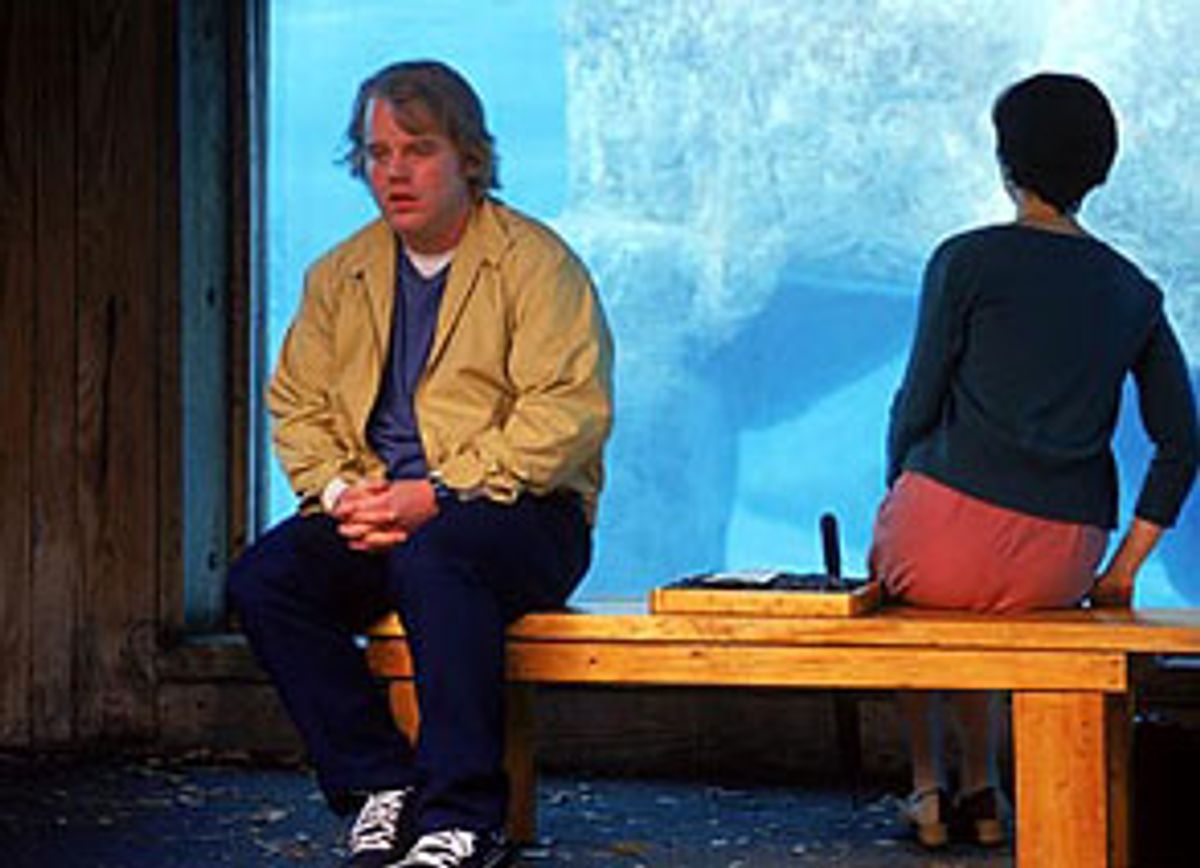 This holiday season in the movie theaters, suicide is the new black. "Love Liza" is the fourth movie of the last two months to tackle the theme of People Who Love People Who Kill Themselves, after "Solaris," "The Hours" and "Morvern Callar." It's probably not fair to bash this little downbeat '70s-style film. It does have some admirable qualities, and I doubt this minitrend is actually expressing anything fundamental about our culture right now. No doubt you could construct such a hypothesis: 9/11, Enron, Kelly Clarkson, blah blah blah.

Those four films are quite different, but none of them -- to their creators' everlasting credit -- traffics in the customary Hollywood narrative of grief and healing we might expect from a suicide flick. "Love Liza" may frustrate as many viewers as it delights (if not more) and it is almost relentlessly depressing, but it's also a principled, sharply realistic film that captures a highly convincing vision of Middle America. (It was shot in Mobile, Ala., but its story could take place almost anywhere between New Jersey and central California.)

It's probably fair to suggest that "Love Liza" might not exist at all -- or at least might not have found distribution -- if its screenwriter, Gordy Hoffman, weren't the brother of famed character actor Philip Seymour Hoffman, who plays the bumbling husband of the dead Liza. The latter helped shepherd the film into production, and it reaches us as a genuine indie, relatively uncontaminated by the horrors of the development process. The film also introduces a promising new director, Todd Louiso, who has a fine eye for everyday details and unassuming, human-scale compositions. (If the name sounds vaguely familiar, it's because he memorably played a record-store geek in "High Fidelity." Another connection to that film: Chicago experimentalist Jim O'Rourke contributed the languorous original music.)

Wilson Joel, played by Philip Seymour Hoffman, is not the kind of character likely to erase Hoffman's reputation for playing weirdos, but at least he's got a reason to be weird. Wilson laughs way, way too hard at other people's jokes and sleeps on the floor of his suburban bungalow, but we've already heard someone at his Web design firm say to him: "So sorry to hear about your wife's death." He responds, "Oh, yeah," as if this is something he has only dimly heard about.

Wilson is beyond dysfunctional and uncommunicative, a bloated, shambling corpse whose sole priority is not to think about what has happened. Of course Hoffman is a specialist at peculiar characters marked by wounds both visible and invisible, and this is a penetrating performance sometimes too painful to watch. It's also a problem of sorts, or at least it establishes the difficult character of "Love Liza" that some viewers are likely to find offputting.

We never learn anything about Wilson and Liza's life together, and only gradually can assemble any information about her death. Wilson is so lost in his own despair and so committed to oblivion that there is no way out. He finds a suicide note from Liza (presumably containing the title phrase) but can't bring himself to read it, hauling it around the movie like his own little albatross. His conversations with Liza's mother (Kathy Bates) are fragmentary exchanges that end with one or the other party walking away or hanging up; they care about each other but have utterly lost the capacity to communicate.

When a gawky co-worker named Maura (Sarah Koskoff, very good in a small role) talks Wilson out of the house for a trip to the zoo, where she confesses that she's attracted to him, Wilson simply gets up and leaves. When a well-meaning employer sends some computer equipment to his house so Wilson can keep working, he just sits on the unopened crates and goes about his business -- which is mainly sitting around getting wasted by huffing inhalants. This activity dominates much of the middle of the picture, and it's a masterstroke of a certain kind. There's no more destructive, cheaper or easier way to get high, yet the sight of a grown man passed out in his underwear with a jug of model airplane fuel has a shock value unequaled by any amount of tequila, coke or heroin abuse.

In an extended, tragicomic and quite delightful digression, Wilson becomes briefly engrossed in the subculture of remote-control (R.C.) enthusiasts, those groups of middle-aged men who race model boats and cars in public parks. He's led into the hobby, in fact, purely as a way of explaining to Maura why his house stinks of gas all the time. She sends over a hobbyist relative named Denny (the wonderful Jack Kehler), who may not have much more direction in his life than Wilson does but is able to serve, at least temporarily, as Wilson's R.C. guardian angel.

Gordy Hoffman's writing has a kind of acid-tinged sweetness in its best scenes. Denny, for example, is a likable guy who wants to help Wilson, but there's also something off about him. He's capable of petty, small-minded behavior and doesn't come anywhere near the quirky, salt-of-the-earth caricature you'd get in a Hollywood film. Bates' character loves Wilson desperately, but turns on him in a vengeful rage as he retreats further and further from her. "Why aren't you on the couch?" she asks when she finds him huddled on the floor. "I know it's a stupid place," he responds, "but it's the place I've found."

For all its black humor (as with the gas-huffing teenagers who become Wilson's only reliable companions) and despite Wilson and Denny's road trip to an R.C. race meet, "Love Liza" never quite pulls out of its downward spiral. Model airplanes aren't enough, it turns out, to stop Wilson from ruining his life. He's still buying Exxon Plus by the gallon -- and still dragging that damn letter around. This isn't an uplifting nor a profoundly memorable film, but it's honorable and honest enough to face a truth that Hollywood movies rarely deliver: that life sometimes deals us injuries from which we never recover.