Even with a tired tycoon character and a lame script, Hugh Grant's wit and charm almost save this hit romantic comedy. But not quite. 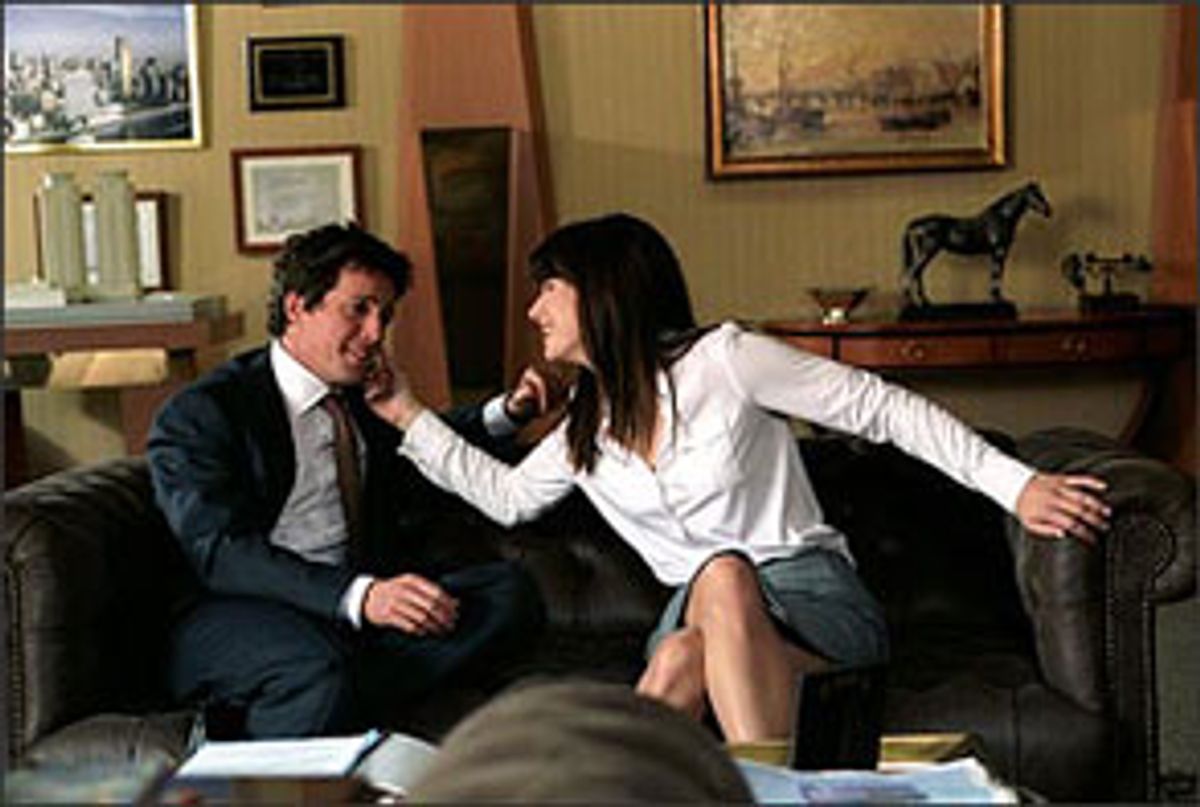 There's nothing more knee-slappingly hilarious in a romantic comedy than the vision of conservative money-grubbers hooking up with lefty do-gooders. Or so Marc Lawrence, writer and director of "Two Weeks Notice" (he previously wrote the script for "Miss Congeniality"), would have us believe.

Love that blindly leaps economic boundaries can be a linchpin of great romantic comedy, as anybody who has ever fallen for "Holiday" or "My Man Godfrey" will tell you. But although the line between a classic setup and a gimmick may be fine, it can also be as deep as a chasm.

In "Two Weeks Notice" -- which, alas, takes place in a world where people are so busy making money they have forgotten how to use apostrophes -- Hugh Grant is George Wade, a bigwig real estate developer (and secret lover of architecture) who realizes that the best lawyer he could possibly hire for his company is the one who's always opposing his biggest projects: Lucy Kelson (Sandra Bullock), a Harvard-educated liberal who works for peanut shells (as opposed to actual peanuts) doing legal aid work, and who also has no qualms about lying down in front of wrecking balls when they threaten property that she feels is essential to the community.

Lucy takes the job, Wade drives her crazy and, pushed to her limit, she quits the gig. Only then does Cupid raise his weary head, remembering suddenly that he signed a contract to do his thing in a romantic comedy and realizing he'd better come up with something, fast. (Perhaps he's been hanging out too much with Charlie Kaufman.) So Lucy and George fall in love, for no discernible reason other than that, by the laws of romantic comedy, their union has been foreordained.

There's nothing wrong with the setup of "Two Weeks Notice." In fact, it could have been a great one. But Lucy and George never spar over their socioeconomic differences, or their political disagreements -- and you know they must have them. When George approaches Lucy with that job offer, she barely bats an eyelash before trading her dowdy Indian skirts and Birkenstocks for trim tailored suits. Supposedly, she uses her powerful and high-paying position to benefit the community by doing pro bono work, but we never see her actually doing any. Mostly, she's fielding inconveniently timed cellphone calls from George, who's one of those poor little lost rich boys who can't figure out which of his 200 tuxedoes he should wear to this or that benefit.

"Two Weeks Notice" makes "Maid in Manhattan" -- in which a highfalutin Republican politico falls in love with a lowly hotel maid -- look like a brilliant Marxist treatise. Of course, romantic comedies don't have to be political at all -- but why bother with the clever setup if you're just going to waste it? Instead of using George and Lucy's most obvious differences to ignite sparks, Lawrence desperately looks elsewhere, seizing on George's haplessness and Lucy's personality tics. He shows us George and Lucy fumbling toward love in the most bored manner possible -- the whole movie feels like a sheaf of paperwork they have to complete before they can finally hook up.

With better material, Bullock and Grant might have had the right chemistry: They have an easy, flirtatious rapport with each other. But their rapport comes out of left field -- it seems to have everything to do with the actors but nothing to do with the characters. I haven't been able to bring myself to give up on Bullock just yet: She seems just on the cusp of being a truly likable actress. But her line readings have a sharpness that feels rehearsed and patented. It's as if she believes that how you deliver a wisecrack is the thing that matters most in romantic comedy. I'm waiting to see less superstar self-consciousness and more inspired lunacy from her. (Why can't she be more like the marvelously whacked-out nurse she played in the little-seen 2000 comedy "Gun Shy"?)

But Hugh Grant, lame role or not, could almost -- almost -- be enough to single-handedly save "Two Weeks Notice." He undercuts the movie's baloney without even trying. I count myself among the people who couldn't stand Grant when he was always playing a stammering sop (à la "Notting Hill") but who can't get enough of him now that he feels free to unleash his inner scoundrel ("Bridget Jones's Diary," "About a Boy").

But in "Two Weeks Notice," George's naughtiness isn't really very naughty at all. Even at his most infuriating, he mostly seems to talk plain old good sense. When Lucy's cellphone rings with an "emergency" message from George as she's standing up at her best friend's wedding, she leaves her pal at the altar only to find that George needs her to solve his crisis over which cravat to wear for the evening, or some such thing. She excoriates him for calling her at all hours, to which he calmly replies, "Why did you have your cellphone on?" And he's got a point.

Grant takes every stupid line and makes it funny, just by underplaying. After George has just met Lucy's tough-nuts lefty law professor mother (Dana Ivey, who's sorely underused here; the hilarious Robert Klein, also virtually wasted, plays her dad), Lucy remarks how intimidating she can be. George shoots back, "I thought she was going to kill me and feed me to the poor."

It may be a thuddingly obvious line, but damned if Grant doesn't send it sailing, breaking the wicket with a deceptively delicate tap. He delivers his lines as if he's forgotten the actual ones and substituted new ones off the top of his head -- they feel natural and easy as opposed to written. In a world of less-than-optimum romantic comedy scripts, Grant is the guy to get. He can take fool's gold and make it real.