Antiwar protesters revive the famous "daisy" ad. We assemble our panel of experts and ask them: Do they love it, or do they not? 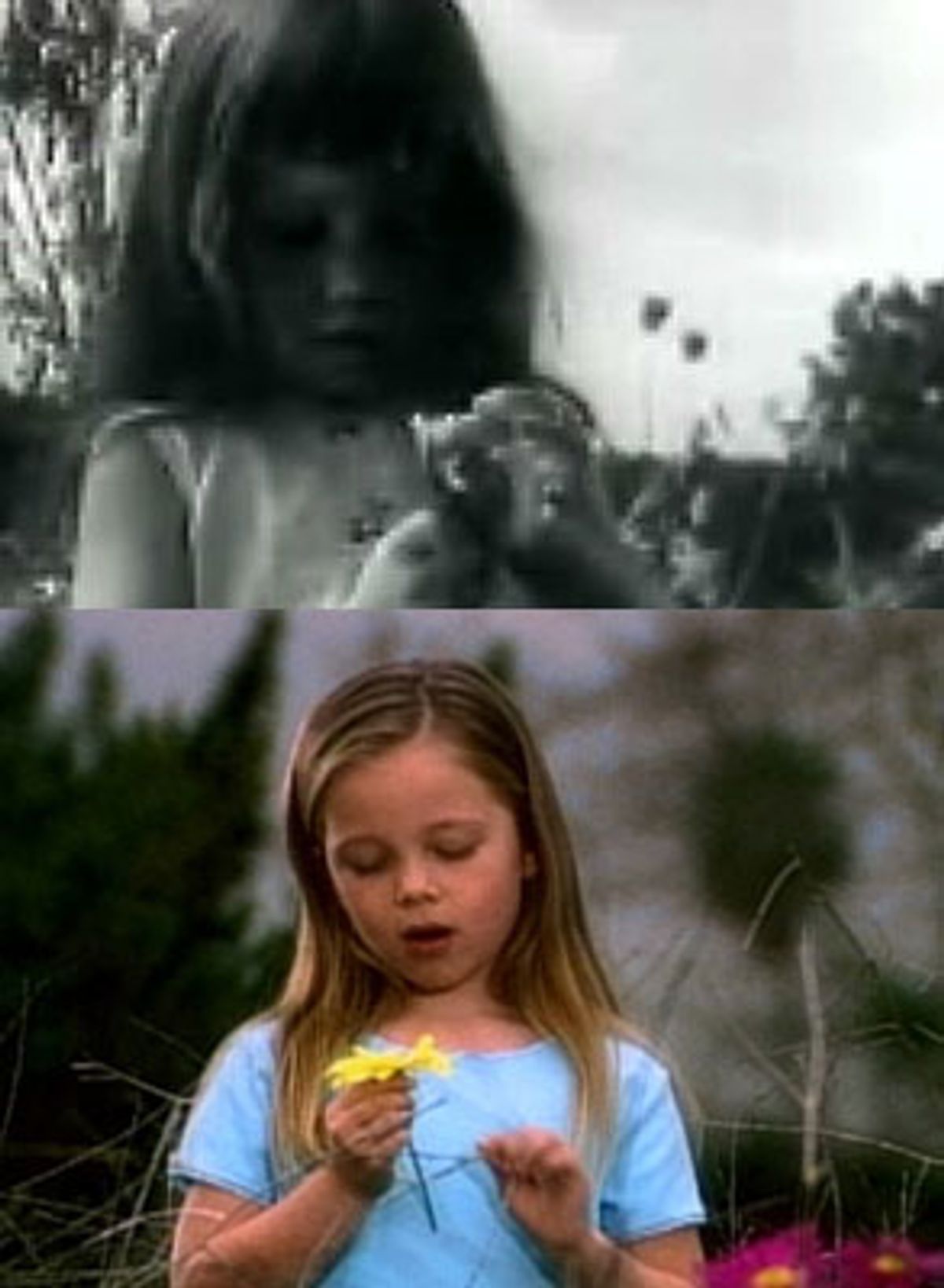 This week, the antiwar group MoveOn.org began purchasing airtime in 13 major American cities for its remake of the infamous 1964 "daisy ad." The original ad was President Lyndon Johnson's attempt to portray his opponent in that year's election, Barry Goldwater, as a senseless warmonger who would lead the United States into nuclear war. Its dark message created an overwhelmingly negative public response, and it was yanked quickly from the airwaves. But the ad -- largely seen as the first "negative TV ad" -- had an unquestioned impact.

MoveOn's version features many of the same, affecting images from the old one: a young girl idly plucking petals from a daisy, ominous voice-overs suggesting that a politician (this time, President Bush) is leading us in a dangerous direction, and then apocalyptic visions of nuclear devastation.

First, you, Salon reader, should view both ads and decide what you think.

Then see if you agree with our assembled group of experts:

Sean Wilentz, Dayton-Stockton professor of history at Princeton University and a contributing editor to the New Republic:

There it is. The little girl picking the flower. It's just like the other one, except it's in color. It's scary. It's meant to be scary. They're trying to scare people much as Johnson did in 1964. They're trying to break the media-induced torpor and the way the cable-media has pumped up the war.

OK, let's say the inspectors work and they find stuff. Are we then justified in going to war? Perhaps. I suppose they would say that they're pointing out the genuine risks. Are we going to nuclear war? I doubt it. But it's not really saying that we shouldn't go to war. It's saying, "Let the inspections work."

They took the original daisy ad off after one round. People went nuts, especially the Goldwater people. I saw it when I was 13; it was summer, it was during a time when a lot of people were watching TV. It had an incredible impact. You saw it and said, "Holy smoke." It took things to another level. I had never seen another ad like that. My parents were shocked, too. I mean, dissertations were probably written about that ad. I think LBJ would have won without it. It probably didn't win or lose him any states. But it was a real moment in advertising history. This is not that. It's a reprise of that.

The Bush administration will ignore it. Rove will find a way to use it to his advantage. But the antiwar movement has mostly been ignored by the media and this is an attempt to get the attention of the likes of you. And it's worked. After the march this weekend, the antiwar movement will get more attention, I think. I'm not sure why that is; it's the same weirdos down there. But MoveOn -- they started during the impeachment, they're an ad hoc, liberal reform group that's been pushing for public opinion on the Internet. That's something that's interesting about it. In 1964, a political campaign hired a big fancy ad agency to this. This time, it was generated by the Internet.

"Let the Inspectors Work" is a problem. There's a whole spectrum of opinion on Iraq that ranges from "Bomb the hell out of them" to "Hands off." In the middle, there's the "Let the inspectors do their job" people. It looks to me like it's antiwar, but really it's less hard-line than that. What makes it odd is that with that strong of an image, one would expect an equally strong message. But you're left in limbo. Bush, for all his saber rattling, is letting the inspectors work. So what's their position? If the inspectors find something, do we then go to war?

It suggests that Bush is trigger-happy and doesn't understand the consequences of war and that this could end up being a world conflagration. That's what the images say. Are we really on the edge of nuclear holocaust? I don't think so.

Augusten Burroughs, a former advertising creative director and the author of a recent best-selling memoir, "Running With Scissors," whose next book, "Dry," will be released this summer:

What an absolutely hideous commercial! If one insists on featuring a child in a spot, I would think that one would first and foremost insist upon a child who could act. And who did not have -- as this child appears to have -- a curious facial rash. I won't even address the $7 spent on wardrobe. Let's move straight to the graphic, powerful scenes of war. Here, juxtaposed with the shots of the sweet, innocent "little girl," this war footage is supposed to fill us with terror. "If a bomb like that explodes here... that precious little girl could die!" Instead, these scenes of destruction and firepower have the opposite, thrilling effect. The poor quality of the video footage reminds us that it's been a long time since we've had a really good war. The media coverage would be spectacular, thanks to today's sophisticated digital video cameras. A new war would be great TV. Yeah, motherfucker, BRING IT ON! All the while, a voiceover drones on, hypothesizing. "Maybe. . . maybe. . . maybe. . ." By the third "Maybe" one has simply stopped listening and is instead looking at the explosions and wondering what sort of graphic design elements CNN will create when the war finally does happen. Will they include an explosion-orange color in their new War on Iraq graphics? Or is this color considered proprietary to "Connie Chung Tonight"?

Alas, the greatest crime this ad commits is that it does not respect its viewer's intelligence. It uses a cheap scare tactic, an easy, manipulative play for sympathy. And it does this with production values that are far below the industry standard. I believe it is the moral responsibility of the creatives who conceived of this commercial to kill themselves. And take the little girl with them.

Neal Gabler, senior fellow at the Lear Center for the Study of Entertainment at the University of Southern California and the author of "Life the Movie":

The process of this ad is fascinating. It relies on the collective memory of an ad shown once even though there's no logical connection between that ad and the current situation. It's drawing on an emotional association rather than logic: Almost no one in America remembers that ad. It's embedded in the collective memory as something that happened. But now [the first Daisy ad] becomes a reference point for anything that deals with warmongering.

Ads work primarily on an emotional trigger. If you scrutinize the context it doesn't hold up. For example, the mushroom cloud: In no way does that apply to the Iraq situation. Has anyone said that an Iraqi war will spread to a world conflagration? Is there a notion that we're on the road to our own self-destruction?

Ultimately, part of the problem is how weak the last line is. It's anticlimactic. "Say no to war" or "No war," something simple like that, would have worked better. Instead we get: "Let Hans Blix finish his report"? It's disingenuous. Its intent is that we should not go to war. Its content is more like "We should not go to war until Hans Blix gives his report." Even the Bush administration believes he should finish his inspection. Who opposes that?

[The creators of the ad] know that 60 percent of the country wants us to go to war. I suppose that if you're going to oppose the war and incite public opinion, you can't just say "No war." Clearly it has to be moderate and say something we do believe. But it's a mixed message.

The Bush administration has the hand. If they find evidence, we're going to war. If they don't find evidence, we're going to war on the pretense that they're hiding something. Let the inspections work? We're going anyway. Everyone knows that. But MoveOn.org doesn't have any choice but to act like they trust the system -- the inspection process -- because the American public trusts the system. But, really, the inspection process is irrelevant except to gain political support. Everyone knows that except, maybe, MoveOn.org and many of the American people.

Vinny Warren, a copywriter/creative director with DDB/Chicago, the firm that created the original Daisy ad:

The original worked because of the context. It was the Cold War, there was legitimate concern that this Goldwater guy was trigger-happy. This appears to be against the war, but it's based in scare-mongering. There are better arguments for not going to war with Iraq. This takes advantage of the country's mood of fear since Sept. 11.

And the original Daisy ad is 40 years old. I'm not sure that it's at the [forefront] of people's minds now. I'm not sure it will resonate. Then, there was a legitimate fear of nuclear war with the Russians. Which nations have nuclear weapons now? Who's using them? We don't know.

And "Let the inspections work" -- they are working, aren't they? [The Bush administration] is letting them do their business. They are letting them work. It's not the strongest argument for not invading Iraq. It's scare-mongering. Maybe "Don't go to war, because there's no reason to go to war" would have been better, if that's their stance.

It's like lighting a match and walking away. It seems more like a political ad directed at politicians. In 1964, you knew there was something you could do. You could vote for Johnson. Now -- what are we supposed to do?