Joan Rivers is unbelievably vile and crude -- she and daughter Melissa must get their own reality show! Plus: Kelly Osbourne gives a clinic on dealing with Dad. 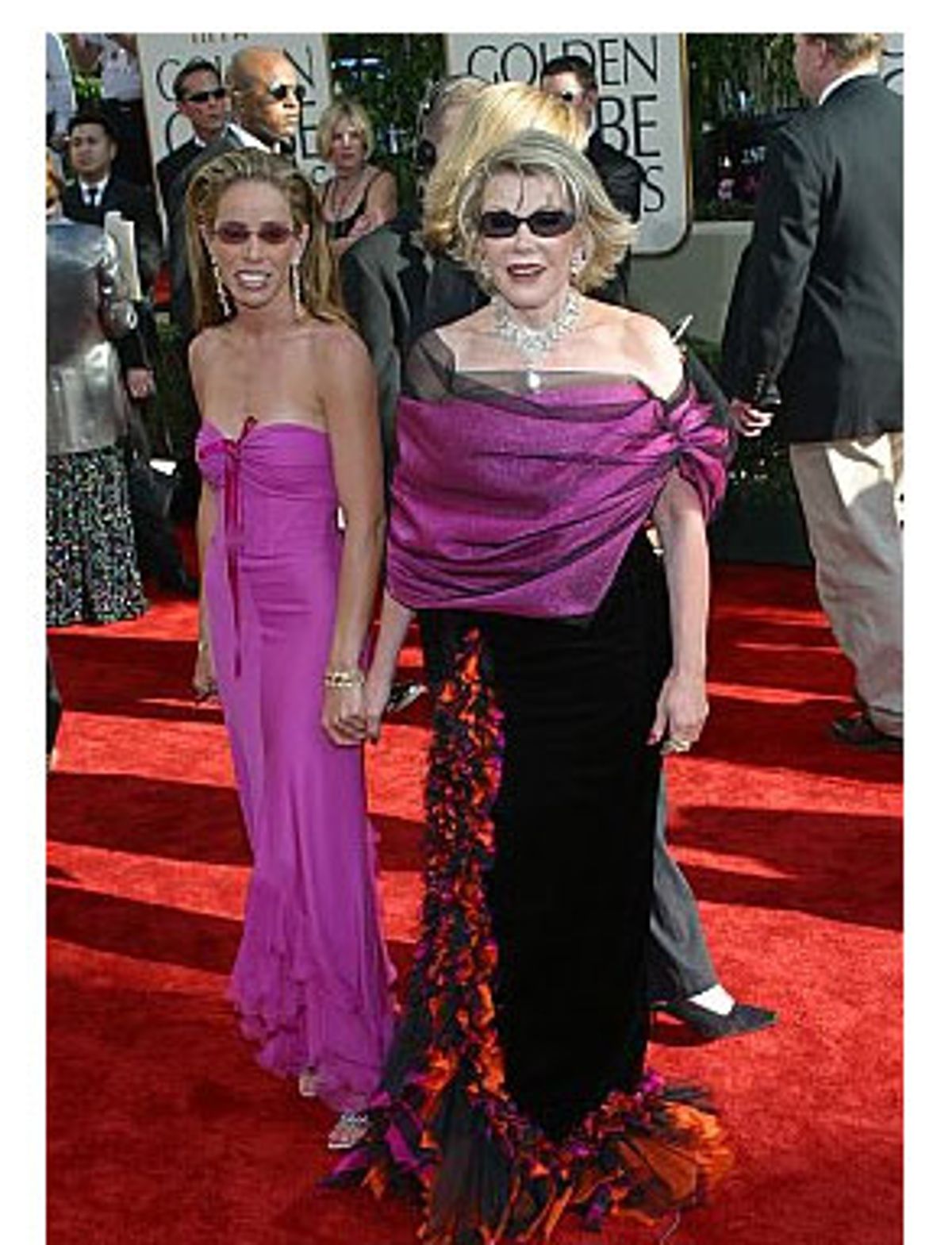 Last night it occurred to me that if anyone deserves their own reality show, it's Melissa and Joan Rivers. This stroke of genius hit me while I was watching a live edition of E!'s "Fashion Police" the day after the Golden Globe Awards. Joan and Melissa possess a certain quality that has until now been missing from reality sitcoms: seething familial resentment, clear evidence of childhood trauma and utterly mismatched opponents.

That's what would set my show, "The Rivers," apart. (I know it's not grammatical, but who's going to produce a show called "The Riverses"?) You'd have none of the palpable affection of "The Osbournes," none of the zonked-out detachment of "The Anna Nicole Show," none of the cheerful self-deprecation of "Star Dates." Instead, you'd get the unadulterated pleasure of watching Melissa gamely try to keep things clean, vapid and obsequious as her mother lets fly increasingly revolting and mortifying remarks just so she can watch her daughter's face twist into a mask of pure hatred. The cattiness was kept to a disappointing minimum during the E! fashion wrap-up, except when it came to each other. Then Joan and Melissa proved that they really are a Jean-Paul Sartre play waiting to happen.

Melissa kept trying to impersonate someone who didn't get her job thanks to her increasingly unhinged mother, but Joan, as usual, wouldn't let her forget it. "You're my daughter, " she screeched, "and I know because I've got stretch marks the size of Texas." It's not as if Joan Rivers hasn't exploited her mixed feelings about motherhood (or motherhood to Melissa) for decades now, but Melissa has never seemed so poised to reenact a Greek tragedy before.

Consider this exchange on the "Fashion Police":

Still seething from the long-forgotten stretch-mark remark, Melissa chimes in with a weak "The cheap sex is usually you," too late for a riposte, and too dark for a joke. "Never, never, sweet Melissa," Joan retorts swiftly and pointedly. "It has cost me a fortune!"

Obviously trained for decades in recognizing defeat, Melissa scrambles to turn the attention back to the subject of Golden Globe fashions. Joan throws in the grossest joke of the night as a parting blow.

"Were we there? We had fun?" Joan yelps. "That explains the stains on the back of my underwear!"

"Let's just go back to this," Melissa says wearily.

A few moments later, the proudly anorexic Rivers girls are discussing Hollywood moms and their miraculous ability to rid themselves of all pregnancy weight within hours of giving birth, when Joan cleverly segues into another attack on Melissa.

"Of course they do it! They have help! They have trainers! They have cooks! Not like I did it. I did it all myself. I wiped your ass. I cleaned up chunks, and that was last night! I was a damn good mother!"

Melissa looks likes she's going to hit her. Instead she says: "Let's go back to business."

Is it possible that poor, daft Melissa doesn't realize that this -- and not her thoughts on Nicole Kidman's dress -- is her business? Tune in next time on "The Riverseses."

Melissa could learn a thing or two about handling her parents from Kelly Osbourne. Kelly was on "The Howard Stern Show" the other night with Dad Ozzy and, as always, she demonstrated that the best way to deal with an embarrassing parent on camera is to maintain an attitude of sullen detachment (or, failing that, to just be likable).

Kelly and Ozzy on Howard's show: It was just like the old days, before they got extra-famous and Sharon got sick and Ozzy started hitting the bottle again. The deeper Stern got into what started to seem an on-camera intervention and family counseling session -- begging Sharon to get some rest, beseeching Kelly to abstain from having sex with her rocker boyfriend, asking Ozzy to lay off the bottle (which made Ozzy snap, even more incoherently than usual, "You try living in my head for a day!") -- the further away Kelly seemed to float. With problem public parents, you have to learn to pick your battles. You also have to plan how to win them.

Her dad, Kelly told Stern, has been drunk every time he's met her boyfriend. "The first time he met him he turned around and said, 'No sex!' I died. I just died."

"Kelly," Howard replies. "Your boyfriend is known for screaming onstage until he vomits."

"Yes, he is," she replies, breaking into a proud smile.