While Bush cuts taxes for the rich, states are cutting prosthetics for the poor. 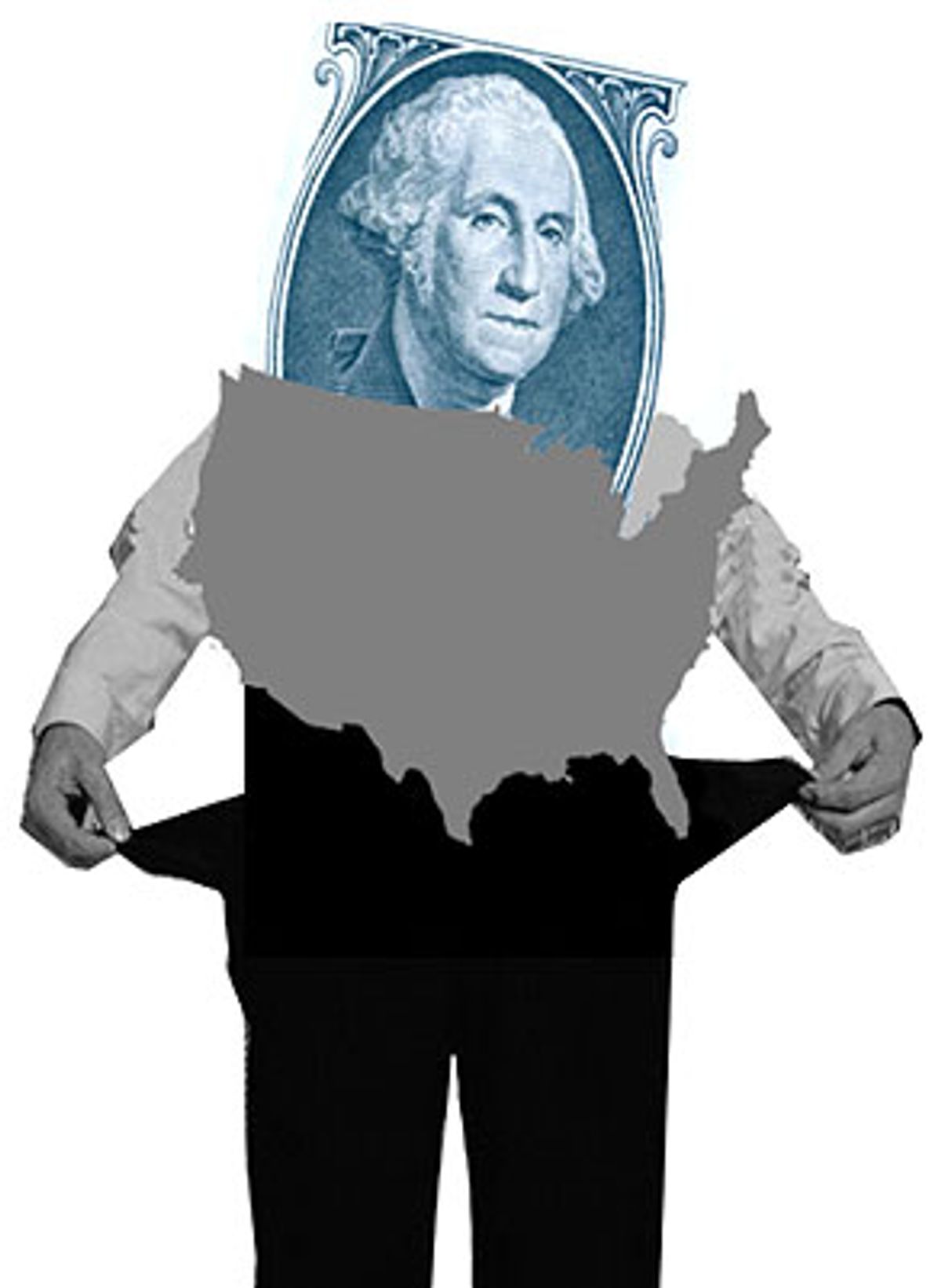 More than a million Americans will lose publicly funded healthcare. Crime-wracked Oakland, Calif., where the number of murders nearly doubled last year, is cutting more than $5 million from its police budget. Massachusetts won't pay for dentures, eyeglasses or prosthetics for low-income residents anymore. Oregon public schoolchildren will likely attend 15 fewer days of classes. Ohio and Kentucky are closing prisons. Illinois is slashing child-care funds for welfare families by half. The Fire Department of New York, formerly the heroes of 9/11 but now just another costly line item in the city's shrinking budget, is set to cut eight engine companies and reduce staffing on the remaining units from five firefighters to four.

Remember how 9/11 was supposed to have rehabilitated the idea of government? Cops and firefighters and other rescue workers were our heroes, and community service was going to be sexy? That was so last year. As the fiscal crisis facing states and cities grows bleaker, politicians are thinking the unthinkable, coast to coast. There's not enough fat left to spare essential services: Although state spending rose in the go-go '90s, most states cut taxes in those years, too. And this isn't their first bout of fiscal pain: 37 states cut their budgets last year, too.

Now states are facing a collective deficit as high as $85 billion for the coming fiscal year: California's is an estimated $35 billion; New York's is likely to hit $12 billion, Texas is at $10 billion and counting; New York City's alone could be as high as $6 billion, more than that of 45 states. Unemployment insurance funds are on the brink of insolvency in at least eight states, which could force them to borrow from the federal government to cover payments to the jobless, and pay interest on the loans, too, only deepening their deficits.

Iris Lav sits in her office and updates the state-deficit estimates daily, almost always upward. "This is the worst crisis in the postwar period," the deputy director of the Center on Budget and Policy Priorities says grimly. But even that bleak assessment understates the problem, Lav says, because 50 years ago the states had far fewer responsibilities. Now three-quarters of state budgets go to public safety, healthcare and education, so big deficits mean cuts in programs for everybody, but especially low-income Americans.

Most media reports identify Lav's outfit as "liberal" or "left-leaning," but everybody quotes their numbers, because they're reliable. Right now, Lav probably wishes they weren't. The hole that states, cities and counties are in "is twice as deep as the early '90s," when the first Bush recession forced huge state and local program cuts, the weary number-cruncher tells me. The healthcare reductions are the worst of it, she says, but many states are trimming education and public safety budgets too. California cities and counties could lose 12,000 police officers and 15,000 firefighters if proposed cuts go through, and tuition at the University of California system may jump 35 percent.

It's against that backdrop that the Bush economic "stimulus" plan looks ever more surreal. It's a $674 billion tax cut, with the $360 billion dividend-tax elimination as its centerpiece, and 70 percent of its benefits go to the top 5 percent of American taxpayers. Even supporters admit it won't work as an economic stimulus. And it comes as Bush's own budget director, Mitch Daniels, admits the federal deficit could reach beyond $200 billion next year; pessimists say it could go as high as $500 billion over the next couple of years, if the impending war with Iraq, and/or rebuilding period, is long and costly. The total cost of the Bush tax-cut plan could reach $900 billion over the next decade when interest payments on all that debt are factored in.

Spend much time looking at the headlines about state and local budget cuts -- cops and firefighters? teacher salaries? prosthetics for low-income amputees? -- and you'll find yourself wondering: Has Karl Rove lost it this time? He's the supposed mastermind of the dividend cut, designed to stimulate not an economic recovery but the lasting loyalty of the so-called investor class to the Republican Party. Ironically, it was under a Democrat, Bill Clinton, that the investor class grew, but most of us own stock through tax-deferred mutual funds or 401K plans, so the dividend tax elimination won't help us. Can Republicans really get away with waging their own form of class warfare, on behalf of such a small band of voters?

The politics of the fiscal crisis remain hard to parse. Republicans are among the Bush plan's toughest critics, and the dividend tax proposal probably won't make it unscathed through Congress. Democrats and some Republicans are pushing to make the stimulus plan include a bailout for states -- the House Democrats' plan includes $31 billion to ease the governors' pain -- but many Republicans argue the states padded their budgets during good times, and ought to be forced to cut them now.

Not many Republican governors are saying that, however. Idaho Gov. Dirk Kempthorne, a GOP conservative who cut taxes 48 times in his first term according to the Washington Post, cut dental care for Medicaid patients last year; but this year he's proposing to raise cigarette and sales taxes rather than push for deeper cuts. But where the Bush tax cuts favor the rich, the fees and tax hikes proposed by most state governors -- sales taxes, sin taxes on alcohol and cigarettes, vehicle license fees -- mainly hit the middle class and the poor.

Meanwhile, states are being slammed with new homeland security duties, while the Bush education and welfare-reform plans will force even more responsibilities -- without funding them. Public schools are expected to meet tough new testing and accountability standards this year, even though Bush reneged on the funding he promised to pay for them, and states are cutting education budgets even further. Just last week the president announced he wants more welfare recipients to go to work, and to work longer hours -- even as states are gutting the child-care and employment services that have helped get more single mothers into the labor market than ever before. And even as welfare rolls are ticking upward again, thanks to the protracted recession.

It's hard to overstate the worst-case scenarios of the states' fiscal crises. Improvements in public health -- declining infant mortality rates, rising child immunizations, new strategies in reducing hypertension, heart disease and killers like breast and prostate cancer among the poor and working classes -- could be reversed by budget cuts and service reductions. And while some may see a silver lining in the cuts to prison programs -- half of all states have cut their prison budgets, according to the National Conference of State Legislatures, several have either repealed or reformed their mandatory minimum sentencing laws for drug and other nonviolent crimes, and at least five states have released nonviolent offenders early -- clearly budget cuts aren't the best way to make new policy. Just let one of those furloughed prisoners commit a heinous crime, and we'll see a decade of progress on criminal-sentencing reform erased. Trust the folks who gave us Willie Horton to do that right.

Could all of it backfire on Bush politically? Maybe. His approval rating is already in decline, and amazingly, a majority of voters in a recent Gallup/USA Today poll said they think they're paying a fair tax rate -- for the first time in 40 years. The tax-cut constituency may finally be shrinking; Rove may finally have overreached. But for now, the most profound costs of the fiscal crisis are likely to be hidden, harder to track immediately -- and borne disproportionately by the poor.

Still, there's reason for the rest of us to worry. The states' crisis could spiral: Felix Rohatyn, an architect of New York City's turnaround in the 1970s, says local and state credit ratings could crumble, limiting their ability to borrow and, down the line, making it impossible to meet payroll and debt obligations. And the governors' attempts to close their budget gaps are just what the economy doesn't need, many experts say. Instead of an economic stimulus package, what states and counties are doing amounts to an anti-stimulus. Layoffs, tax hikes and spending cuts all take more money out of the sputtering economy, Iris Lav notes, which could further reduce state and local tax revenues, necessitating more cuts, unless there's a dramatic turnaround. But Lav doesn't blame them. "They don't have any choice. It's terrible."