ABC's "Alias" features a butt-kicking espionage babe, awesome costumes and settings and possibly the most convoluted family drama in TV history. So why isn't it huge yet? 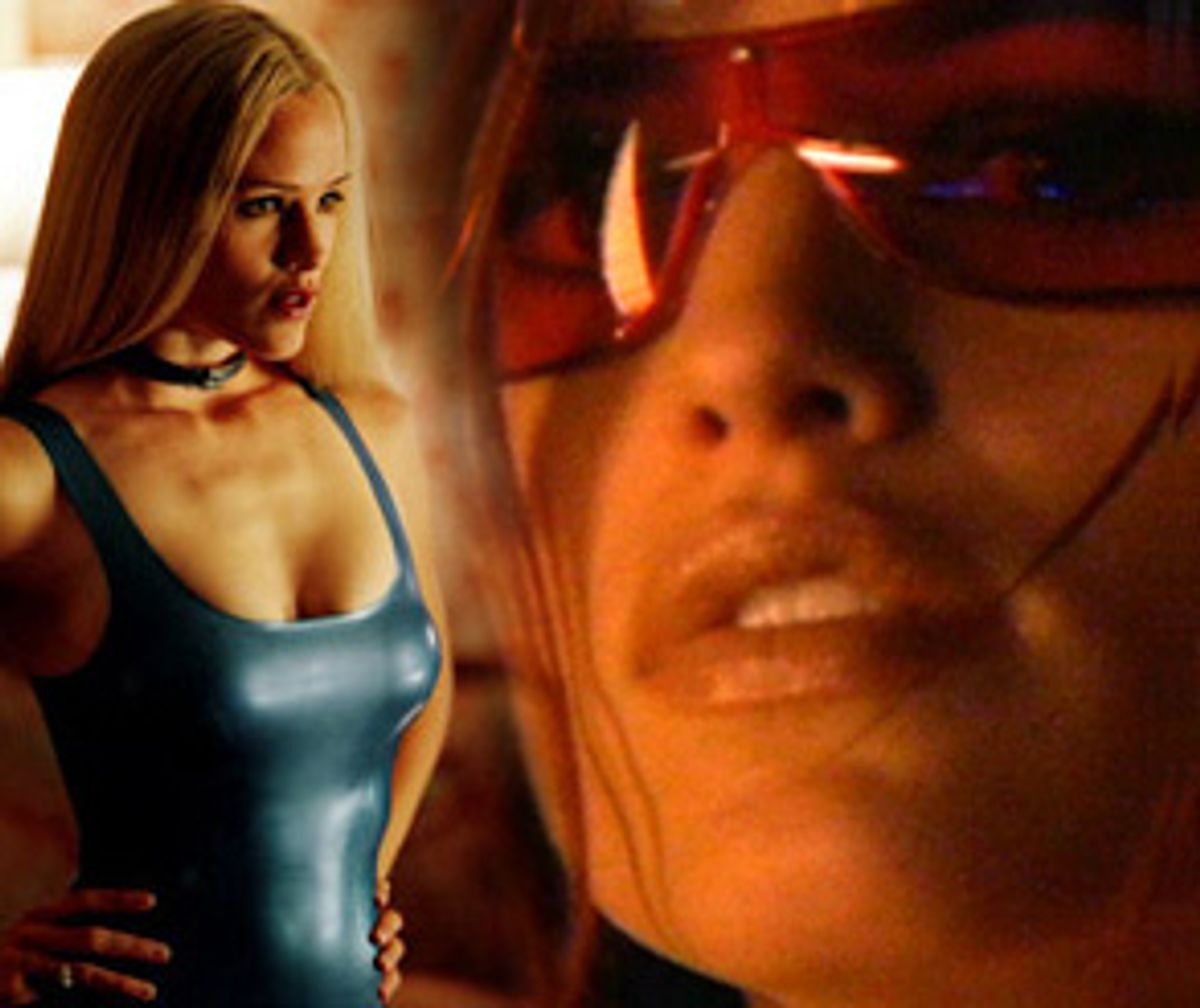 Nobody really understands why "Alias" is not a ratings smash. Critics love it, fans are obsessed with it, ABC is behind it and star Jennifer Garner has had more magazine covers than she's had hot meals. So what, exactly, is the problem?

The only explanation -- and the brain trust's current thinking -- is that the plot is too confusing. And it is. It is staunchly, proudly and maddeningly impossible to follow. You can't just drop in and out of "Alias." You have to account for your whereabouts. "Alias" demands loyalty, devotion and the ability to keep even the most Byzantine convolutions straight. And once you get into it, you really want to. You want to do it for Sydney, the most beautiful, sensitive, ass-kicking, tortured and put-upon double agent in the history of fictional counterintelligence.

But 9.3 million viewers aren't enough, so as of Sunday, after the Super Bowl, a new, revamped "Alias" hits the airwaves. Weekly cliffhangers will disappear and new episodes will be more self-contained, requiring less knowledge of the previous week's episode. ("Alias" is such a teased-out serial that each week's episode is preceded by a detailed rundown of the previous week's episode.) Victor Garber, who plays Sidney's double-agent father, Jack, told reporters last week, "There are some big changes coming up in the next few weeks. The Super Bowl episode is like starting over. It's almost like a pilot episode."

In some ways, it makes sense for "Alias" to become more episodic. But at the same time, this new push for clarity threatens to undermine the murky emotional complexity that has set "Alias" apart from the cartoonish, tough-guy spy genre until now. Early on, the show was described as an action comic starring a hot babe. But it quickly became apparent that "Alias" was actually a family drama about a sensitive and committed hot babe -- with car chases and fabulous costume changes thrown in. What at first seemed like a casting gimmick has turned out to be a genre-bending coup: The Spy From the Dysfunctional Family.

For those who haven't followed it, the series began two years ago with grad student/spy Sydney Bristow finding out the hard way that the agency she works for is not, in fact, the CIA, but the nefarious SD-6, a black-market intelligence brokerage. (They killed her fiancé when she confessed the truth to him about her job.) She is also surprised to learn that her estranged father worked for SD-6 too, and is not, as she had always believed, an airplane parts salesman. Determined to avenge her fiancé's death, Sidney signs up as a counterspy for the CIA, and finds out her father works there, too.

A bit later, she learns that her mother (Lena Olin) was not a literature professor named Laura who died when she was young, but a KGB agent named Irina who betrayed her father and her country, and is alive and well and working for the K-Directorate, a Russian branch of SD-6. At the end of the first season, Sydney tracks down her mother, only to have Mom shoot her in the shoulder. In season 2, Irina offers her services to the CIA and begins working as a counterspy herself. This results in a salad of mixed emotions and second-guessing. As if that weren't enough, it brings her feuding parents back together, and places her squarely in the middle of their personal war.

The joke and the metaphor on "Alias" is, of course, that the Bristow family business has an uncanny way of mirroring their personal problems. "Alias" is a post-Cold War "Parent Trap" for the new millennium. "There are these three people that have such baggage and agendas and concerns," creator J.J. Abrams said in a recent interview. "And any dynamic between them -- all of them being opposed to the other, two of them siding against the third, one of them defending the other for the first time, all three of them against a current enemy -- any version of that is fascinating ... It's about the kid feeling loyal to one parent, guilty about the other, hopeful about one parent and copping to the other parent about that."

As a metaphor for Sydney's family life, the double-agent conceit does quadruple duty. Sydney yearns to be true to herself and the people she loves, but her job pulls her in all directions and pits her loyalties against each other. She longs to forge bonds, but this longing requires her to lie, conceal things and mistrust everyone. She is desperate for love, but her love kills. (Sydney has indirectly caused the death of one lover, literally killed another and is unable to consummate her relationship with a third because of company policy.) She wants to care about other people's problems, but she can't share -- or shoulder -- her own.

In another early episode, she explains that she was approached by SD-6 because she "fit a profile." Indeed. She learned everything she needed to know about the job right at home. Sydney -- and not a slick, supercilious and emotionally detached tough guy -- is the perfect woman for the job. It's perfectly tailored to her particular dysfunctions, after all.

Some of the job requirements:

A deep-seated sense of alienation. When she was approached to work for SD-6, Sydney was a college student who didn't like any of her subjects, wasn't speaking to her father, believed her mother to be dead and described her social life as being limited to the dorm salad bar.

A vague nihilism. Where there's harm, there's Sydney in the way. If the "dorm salad bar" reference just hints at a possible eating disorder, Sydney's decision to join SD-6 confirms her attraction to danger. Several times throughout the past two seasons, Sydney has derived courage from her despair. Her life is punctuated with loss, lies and betrayal; but every loss gives her reckless courage a boost.

A gift for shifts. A perfect chameleon, Sydney literally disappears inside her alias on each mission. She slips into alternative personalities and nationalities as easily as she changes her clothes. The ability to become whatever the authority figures in her life want her to be is obviously a trait she learned young.

A compulsive need to please. In between strenuous efforts to bring down the bad guys, find her mother, avenge her fiancé's murder, beat jet lag, resist her mad lust for her handler, repair the relationship with her father, learn to trust again, escape from torture chambers, obtain microchips from the larynxes of dead spies, not blow her cover, engage in hand-to-hand combat with trained killers all over the world, etc., Sydney has a poignant ability to sit still and smile sweetly as her friends prattle on about their petty problems. She also keeps the house neat.

A lifetime's supply of guilt. If you've ever wondered what part you played in your parents' divorce, think of what it must feel like for Sydney. Her mother married her father with the sole intention of betraying him, and even Sydney's birth was a function of her deep cover. For a while, it appeared that Sydney might turn out to be responsible for Armageddon, according to an ancient prophecy. As if this weren't enough guilt to be carrying around, Sydney eventually figures out that the woman in the prophecy is not herself, but her mother. Nobody likes to point the finger at Mom, even if she did abandon you for the KGB.

With any luck, the new Super Sunday format won't mess with the old formula. The last thing we want is to see Sydney reduced to a workaday spook. After all, she's a spy we can relate to; the perfect spy for the post-Cold War, post-Bond era: A Gen-X workaholic with good intentions, serious doubts and a truckload of emotional baggage, kicking ass for a better, more loving world.